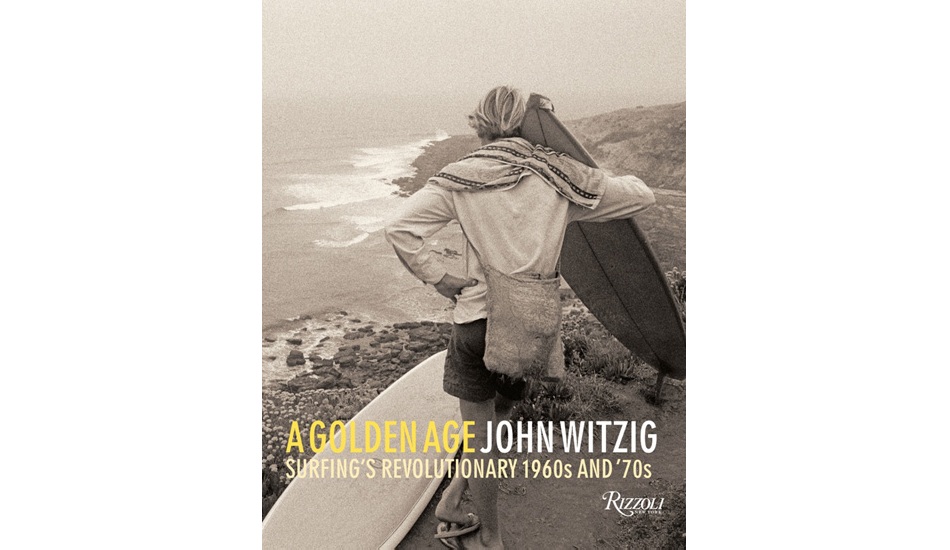 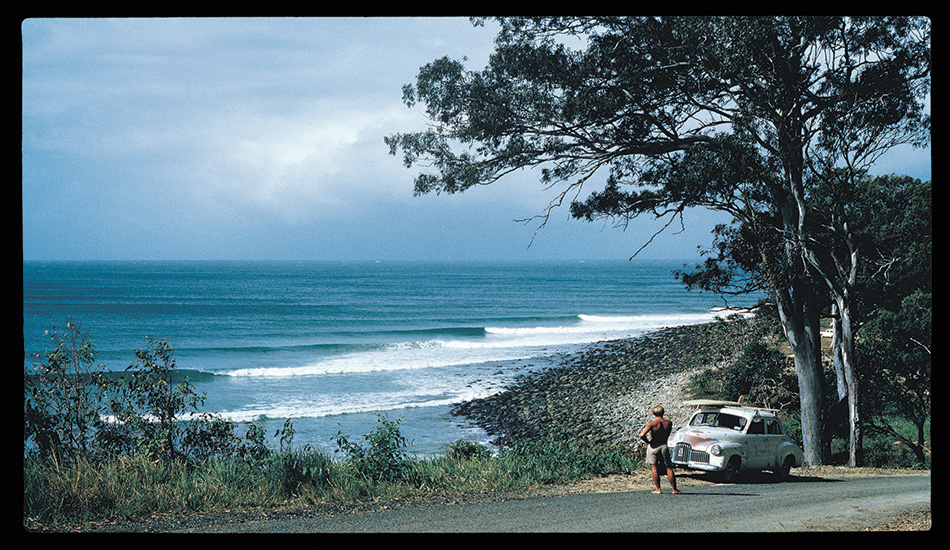 It’s laughable that this picture of Bob McTavish, just a snapshot taken in 1965 or ’66, would resonate with so many people, so many years after it was taken. The totally empty break is a bonus of course (although you’d have thought that I might’ve waited for a better set to come though) and John Mantle’s old Holden does no harm on the nostalgia index. The break is National Park at Noosa Heads in Queensland, and I was loyal to the friends who’d taken me there originally and swore me to secrecy. The first story I published with pictures from there was titled ‘Rincon is where you find it’. 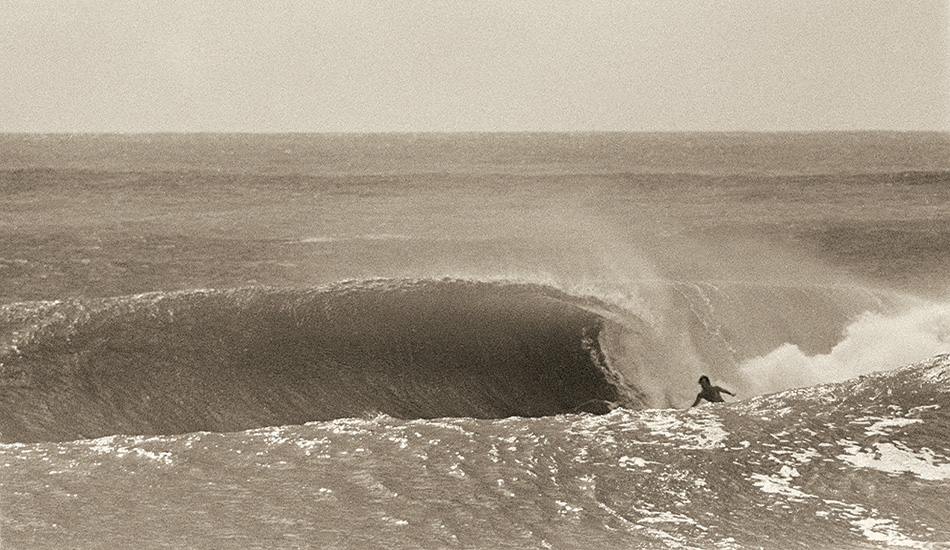 Baddy didn’t bother to challenge conventions, he just ignored them. He became an underground hero to many when Albe Falzon featured him at Angourie in Morning of the Earth. Baddy was filmed making a board, running down to the point, and surfing with a careless and infectious enthusiasm. None of it was fabricated. It wasn’t even (really) romanced. Baddy was (and continues to be) utterly authentic. Baddy was never far from the curl, whether it was the inside section at Angourie, or coming from way outside on what’s a seriously good wave. 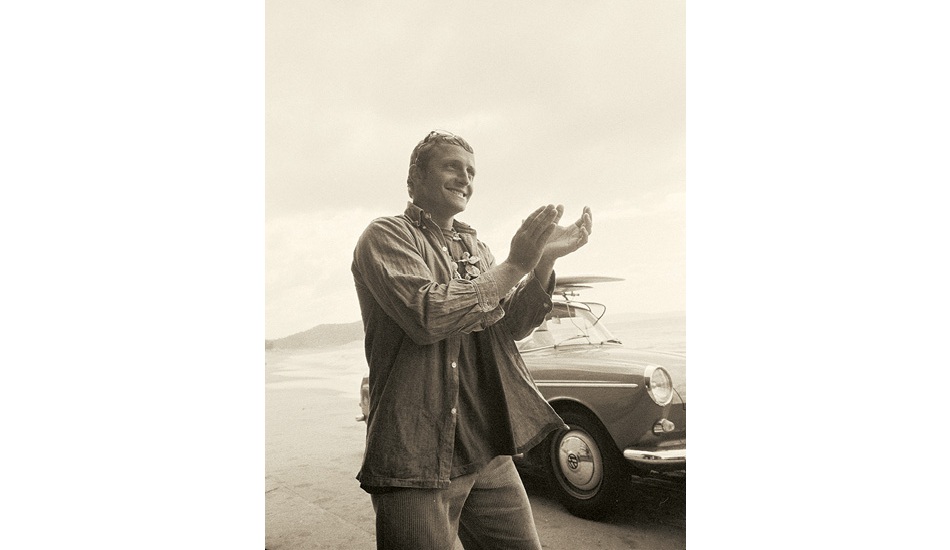 This picture was taken at Palm Beach in Sydney, and Bob says that it was in 1967 … not that it matters. It’s overflowing with the spirit of the times. 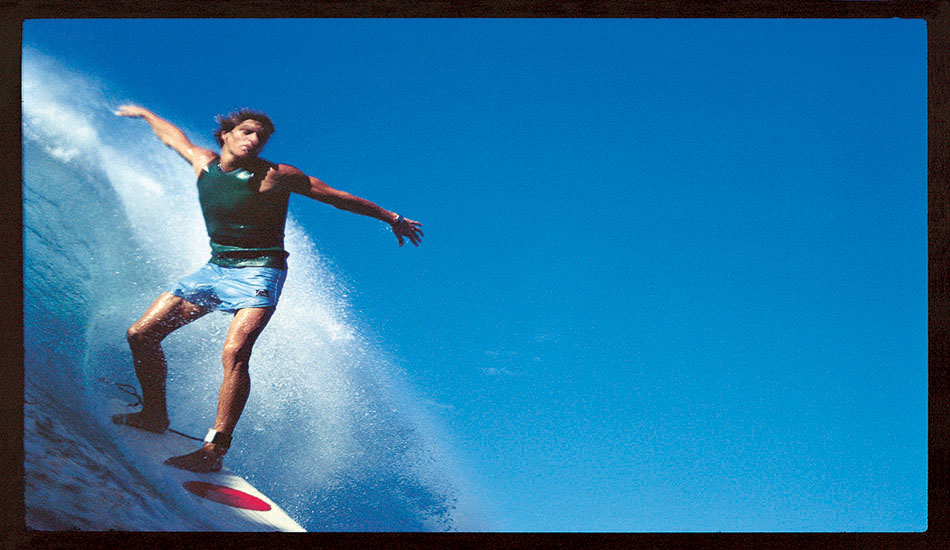 Shooting pictures with the little Nikonos water camera was something of a hit-and-miss affair. The early models had a 35 mm lens that meant you had to get very close to what was happening … otherwise it looked like it was the length of a football field away. You really had to swim, being on a surf mat or a board didn’t cut it. Wave knowledge and surfing experience were essential. I dropped one of the cameras and lost it, and then tethered its replacement to my wrist. I often simply held it out, pointed in what I hoped was the right direction, and pressed the shutter. This picture of Buzzy Kerbox at Haleiwa is an example of that. You probably wouldn’t try for the odd composition, but it’s a favorite image of mine. 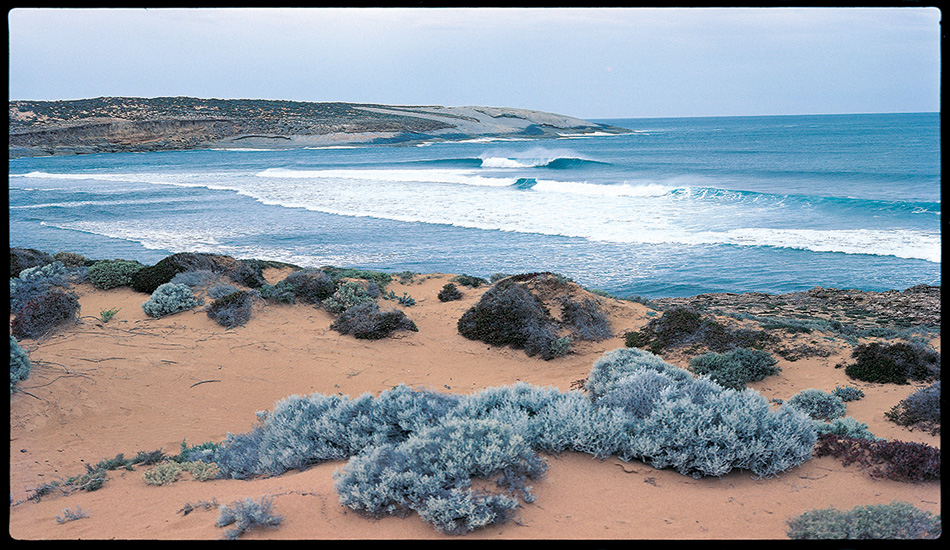 ‘Cactus’ (its actual name is Point Sinclair) is west of Ceduna in South Australia. It’s on the coast south of Penong, the last town when you’re heading west across the Nullabor Plain. It’s always been a wild place. It’s isolated, but attracted fishermen and surfers from at least the 1950s. In the early ’60s it was ‘discovered’ by Adelaide surfers and then fiercely protected as a ‘secret spot’. This is what it looks like when the wind and the swell have got their acts together. This break was called ‘Witzigs’ because it was next to a house my brother built. Despite some historical revisionism since, it’s still called that. 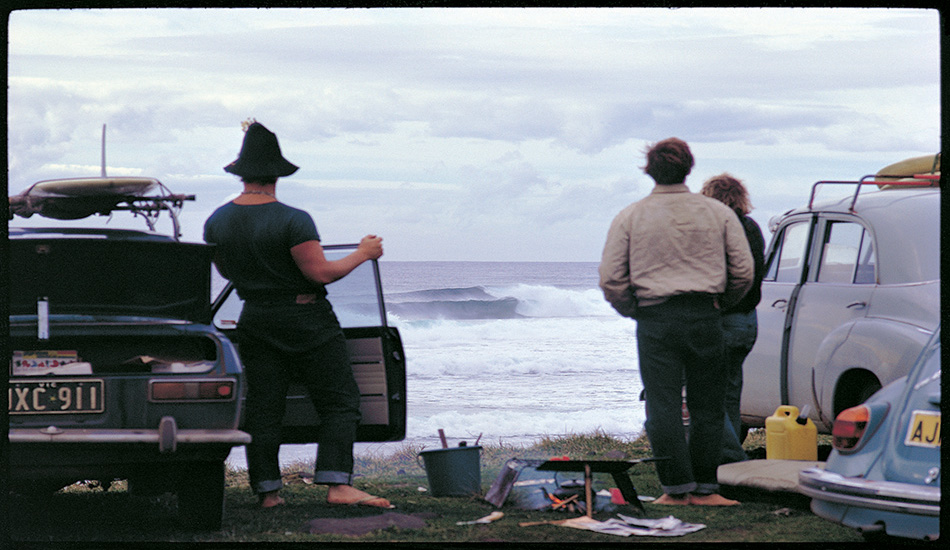 This picture was taken at Lennox Head (just south of Byron Bay in New South Wales) in 1969, and there are early morning arrivals as well as people who’ve slept in their cars. You can’t drive to this spot on the headland any more, and simple camping-out is frowned upon almost everywhere. I understand all the reasons, the inevitable result of the pressures of population, but we’ve lost something. 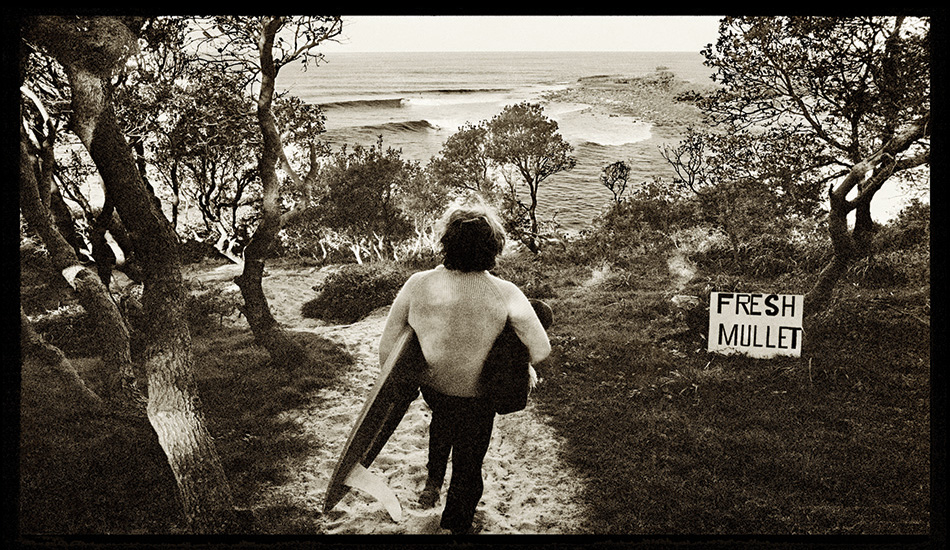 If there’s one picture that captures, for me, the romance of surfing on the north coast of NSW in the early 1970s, then it’s this one. The track down to the surf went straight off the car park and wound its sandy way through the banksia trees. The view of the lineup at Angourie was perfectly framed. I’d forgotten about the sign until I had a close look at the neg nearly 40 years later. Alex, the caretaker of the reserve, was advertising the fresh fish that he sold in his little shop. 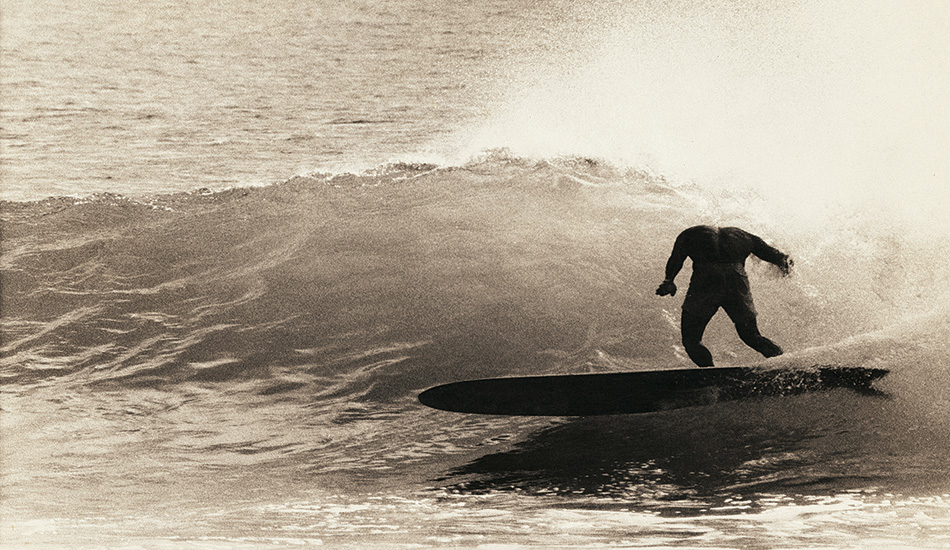 This picture more than any other came to symbolize the ‘involvement’ school championed by Bob McTavish and Nat Young in the mid-1960s. It was shot at Point Cartwright in Queensland and became known as ‘Headless McTavish’. This was one of those rare photographs when I knew immediately I’d pressed the shutter that I’d caught the spirit both of Bob McTavish and of the times. 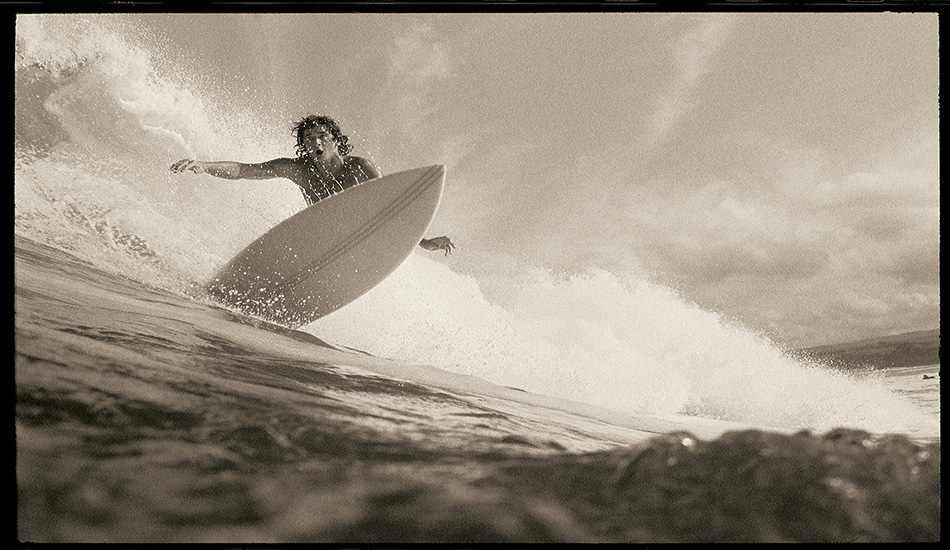 Until the phenomenon that is Kelly Slater descended from another planet, MR had been the most successful competition surfer the world had seen. The only real hint you got of his extraordinary confidence in the water were the symbolism of the decoration on his boards and his wetsuits. He really was quite quiet (shy even) and unassuming on land. He was also pretty funny. Mark was nicknamed the ‘wounded seagull’ by some wit at some point. His surfing style was his alone. It was also very very good. 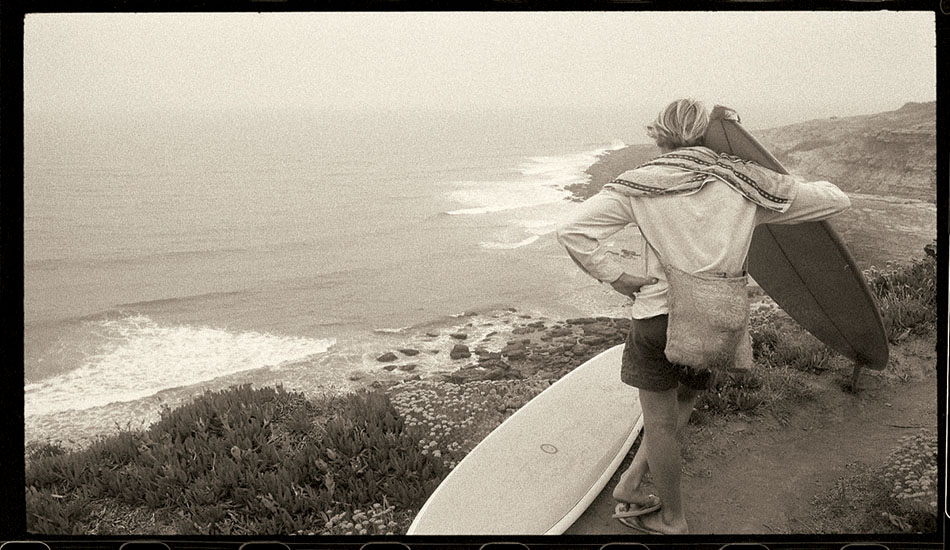 The first time I went to Portugal, it was to find a break north of a town called Ericera. I’d seen pictures of it that an Australian friend had taken when there was surf. In 1976, there was no swell, and my friend Mark Allon and I had no car. We simply walked north from the town until we found where we thought that it was … a perfect example of the lure of surf adventure. Unrequited in that instance. 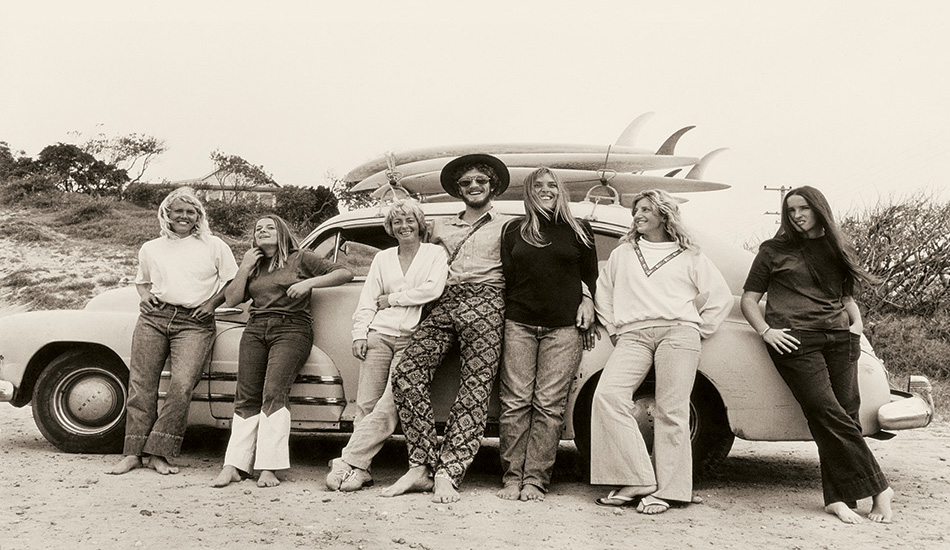 The Australian Championships as a social occasion. This is 1972 when they were held in Sydney. Nat in the quiet pants in the centre with, from the left, Kim McKenzie, Micha Mueller, Phyllis O’Donell, Judy Trim, Carol Watts and Alison Cheyne. The car was Judy Trim’s 1948 straight 8 Buick, and her name was Grace. 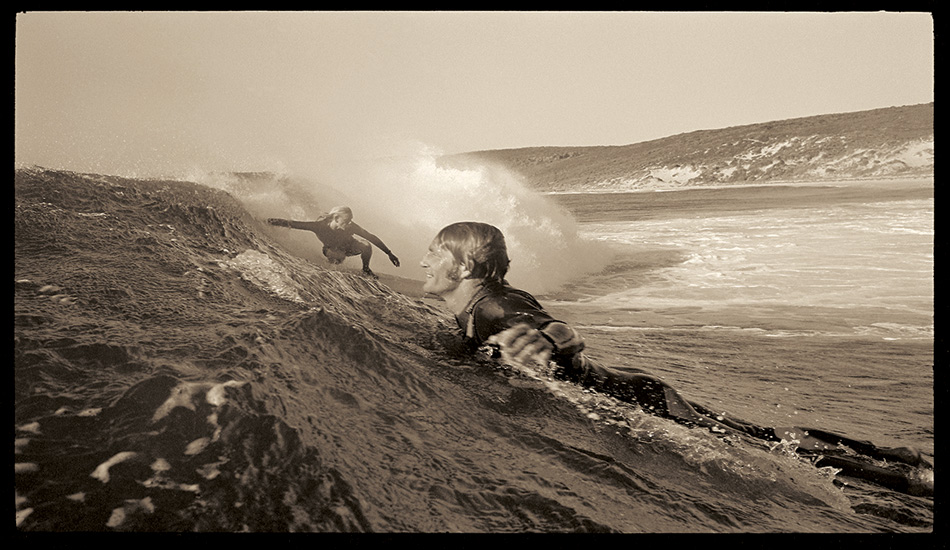 Nigel Coates and Murray Smith surfing at Smiths Beach just south of Yallingup. Much of this superb coast has been protected as a national park. 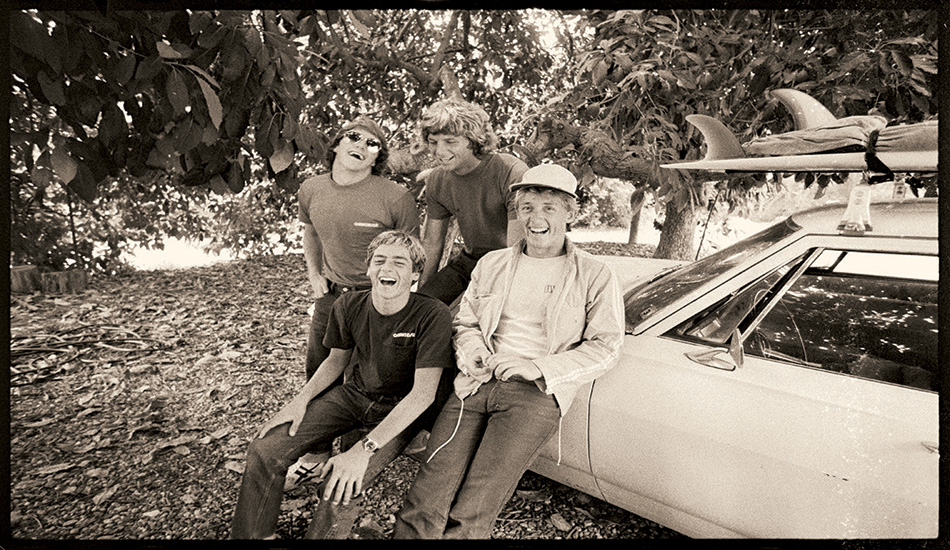 I was in California in 1980, at a party in Monetico, and for some reason, around mid-night it seemed a good idea to walk into the Ranch to go surfing. The expeditionary force was made up of Matt and Sam George, Tommy Curren, Neil Gay and me. There was no swell. None at all. We walked back out and went and surfed Jalama at dawn. 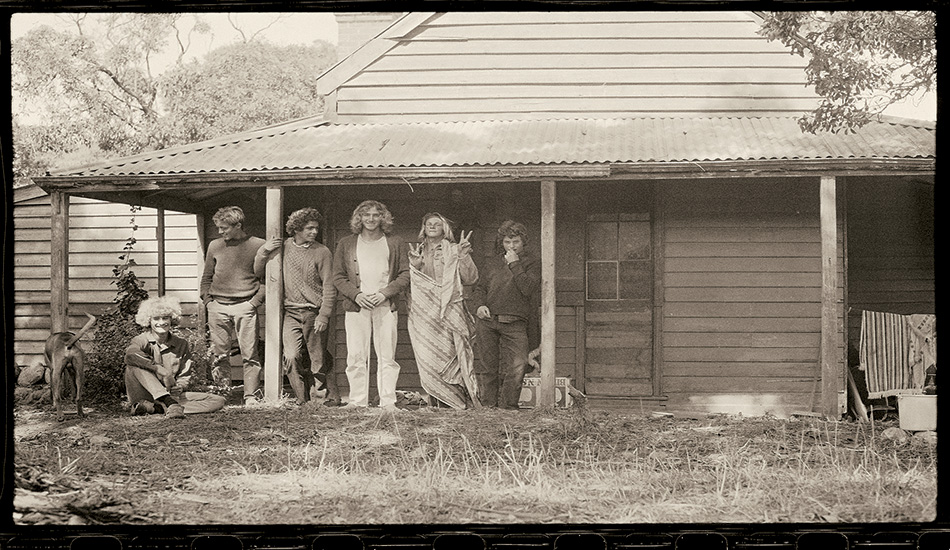 Since I was working for magazines, I needed pictures that told a wider story than just what was happening out in the water. It happened to fit comfortably with my natural instincts and curiosity. I enjoyed documenting the life I saw around me … mostly my friends or people I knew a bit. It’s probably a failing that I rarely took pictures of anyone I didn’t like … there are more than a few significant gaps in my archive as a consequence. It didn’t seem to have bothered me at the time. This house in Torquay was old enough in 1970 to be rented to surfers. 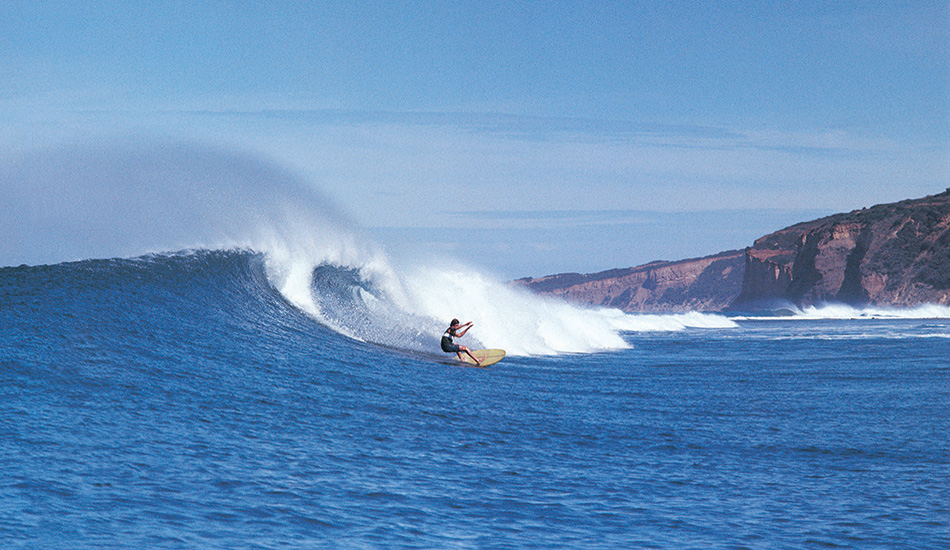 A picture of the Bells contest in 1969 taken from Flossie Neylan’s boat. What I now appreciate about the fact that in those days we didn’t have 10,000 mm lenses (I exaggerate slightly), is that the ocean (and the landscape in this instance) played such a significant part in the picture. We couldn’t get super close with the telephoto lenses we had. The wave itself was always a major player. I admire enormously the remarkable water photography that’s coming out of surfing these days, but the aerials (mostly without wave in sight) leave me cold. Did they make the wave? No one cares? Okay.

I started taking surfing pictures in the very early 1960s because it looked pretty easy. I started contributing to surfing magazines in Australia around the same time for much the same reason — oh, and because the general standard of contributions was abysmal. It wasn’t very hard to look half-competent.

I was influenced by the dramatic use of photographs in the quality general-interest European magazines at the time and, more specifically, by the great editor of the California-based magazine Surf Guide, Bill Cleary. Between 1966 and 1970, I worked for Surfing World, Surf International, co-founded Tracks in Australia, and contributed irregularly to the major U.S. surfing magazines. I snuck into the (self-appointed) role of opinionated chronicler of the times by editing, writing, and taking pictures.

Most of these pictures have lain undisturbed, by everyone including me, for nearly 40 years. I’m not quite sure why there is a renewed interest in them — and it’s quite a surprise. Certainly these days the pictures are being viewed through a social documentary prism; they have attracted attention from far beyond the tiny world of surfing for which they were originally shot.