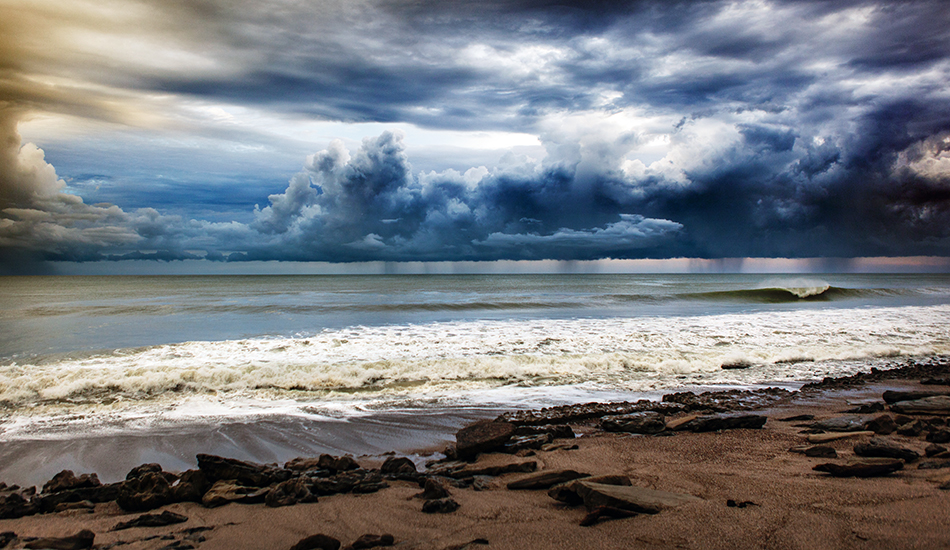 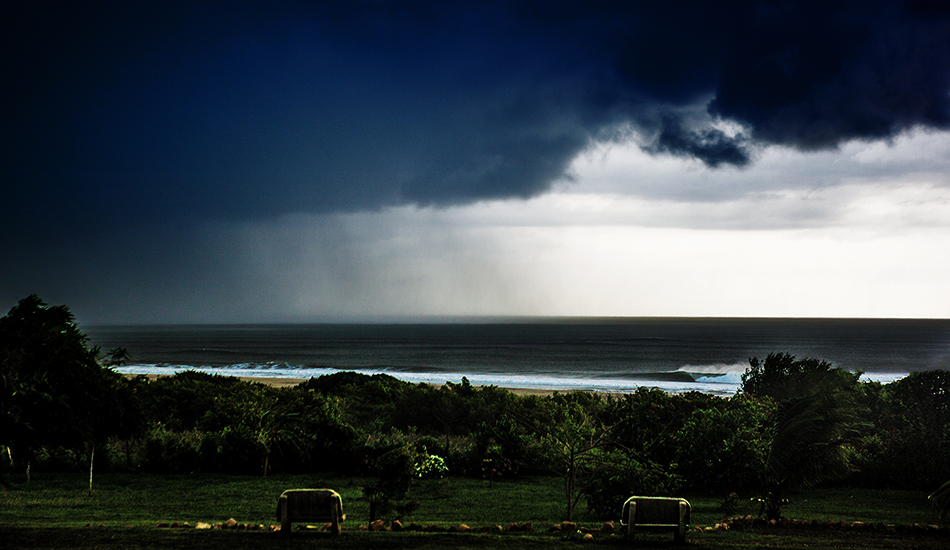 Central America. No one out. No one around. No one watching...except me. It's really wild to think that every image I've taken was a scene of my life. That's something that's helped me appreciate how much I've been fortunate enough to see. It really makes gets my mind all twisted up. Photo: Matt Clark 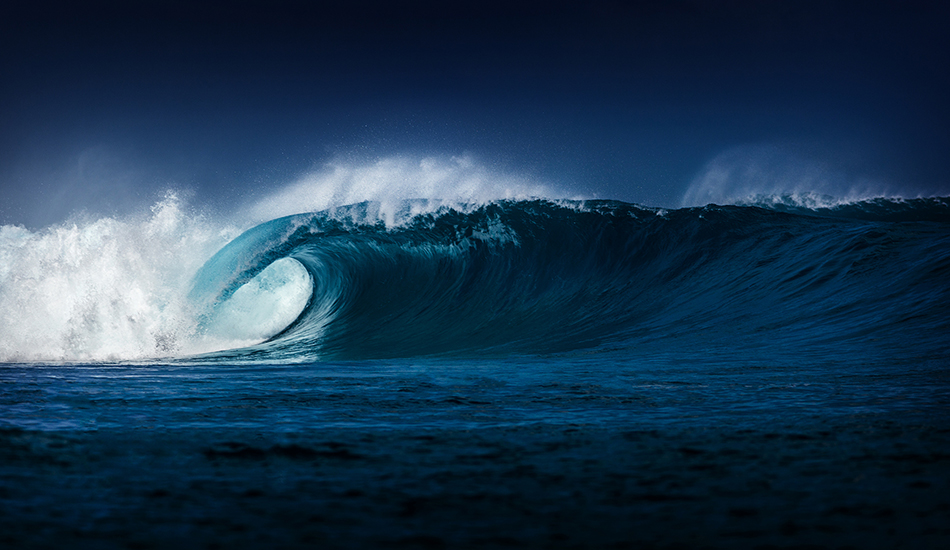 Nokandui's. This wave roars. It's another wave that dances along that line of perfection and ferocious beast. Photo: Matt Clark 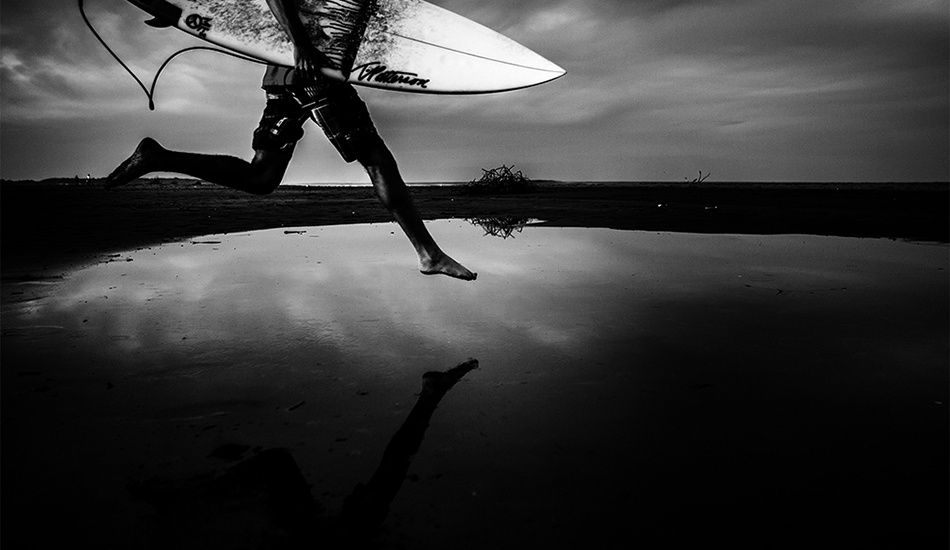 This is Brian Pollak modelling for an image I had in my head in Nicaragua. He was very patient with me and we were both attacked by mosquitoes but I knew the image would turn out pretty cool if we could just time it perfectly. I don't have a camera that shoots 10 f.p.s. so it took a couple of tries to get it just right. Photo: Matt Clark 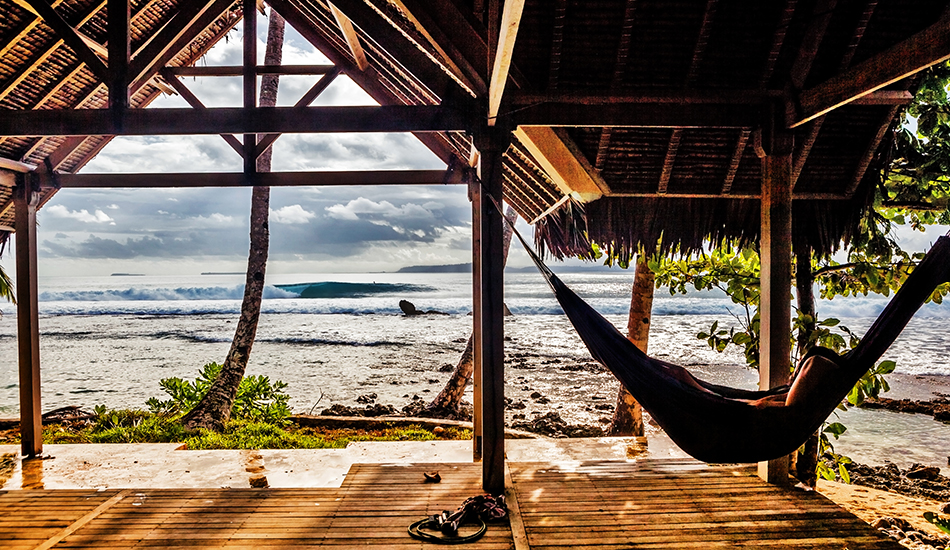 This was taken in the Mentawais. It was my first time there and I swear it's just so overwhelming as a photographer. After about five days on the boat I took the opportunity at E-bay to shoot from land. Of course I didn't expect the torential downpour that led to me seeking cover in this hut with some Europeans, one of which was setting up his hammock. I remember this quite clearly, it really was a great moment. Photo: Matt Clark 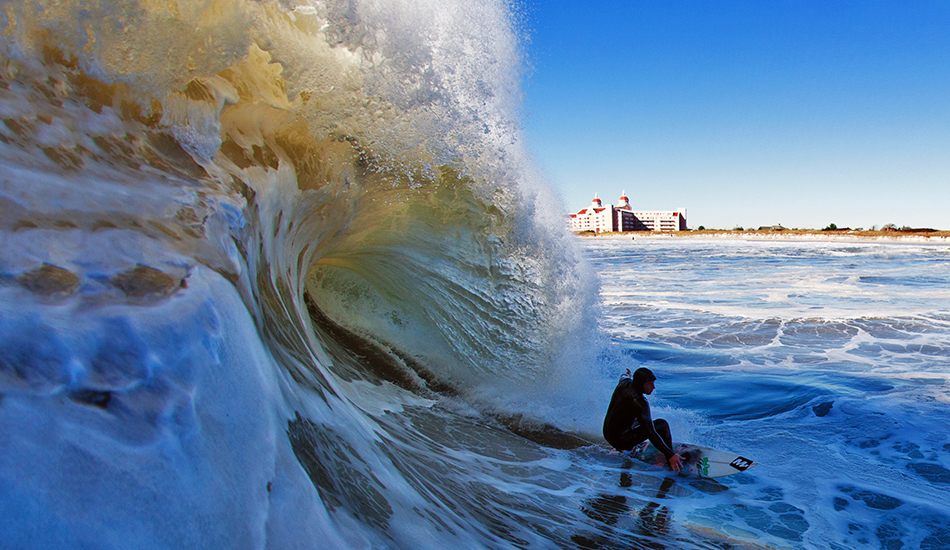 This is one of the better beachbreaks in New York. James Theobald dropping in and bottom turning in front of a pretty recognizable landmark for NY surfers. I guess it gives you an idea of what a good fall day is like. Photo: Matt Clark 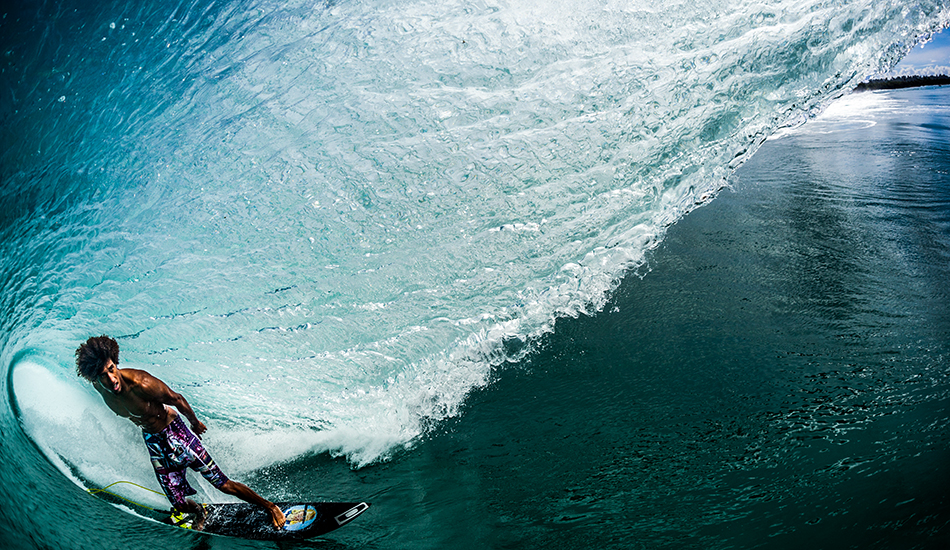 Tripoli Patterson at Bankvaults. Two cool ass names. Trip charges and we both went there with intentions of getting great watershots. This one ended up as a cover. Photo: Matt Clark 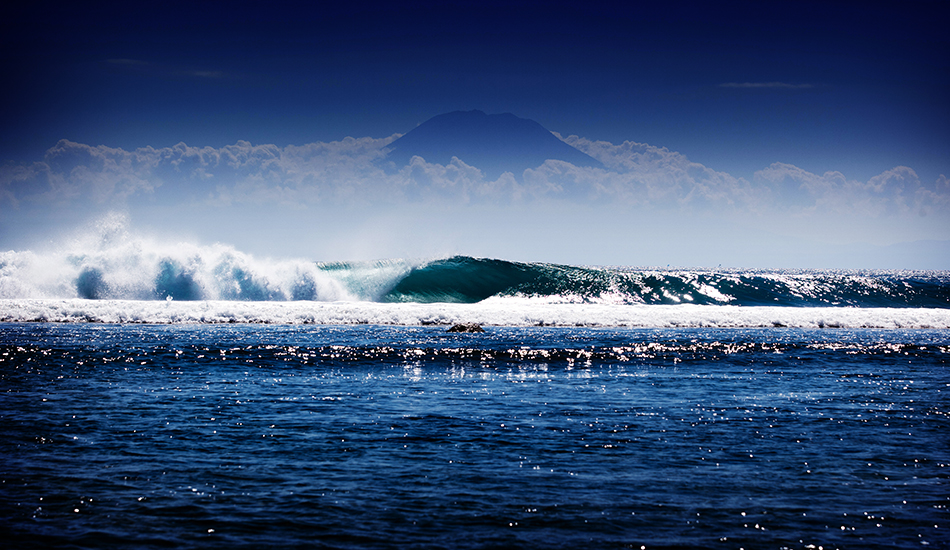 Desert Point, Lombok. I had seen an image that Dustin Humphrey took of Deserts in Surfing magazine a couple years before I found myself there. I wanted to recreate the same image but was unable to for a couple of reasons. I guess this was during a time as a photographer where I needed to just accept the style I have and to stop trying to be anything but who I am. Photo: Matt Clark 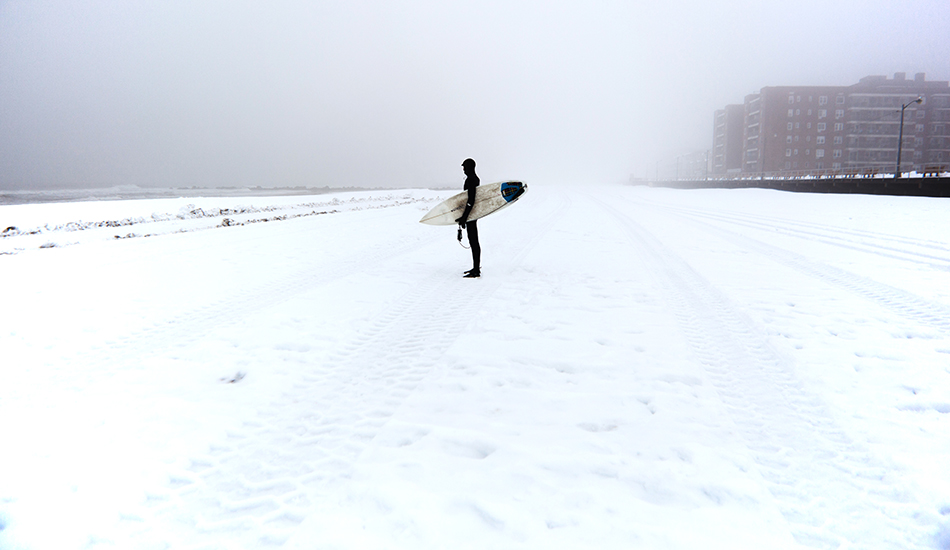 Joe Parrino in New York. This is a somewhat typical scene during our New York winters. It gets pretty freezy up here. There's an incredible silence that you can almost capture through a photograph of any snow scene. It looks as serene as it is. When it snows, it's such a wonderful silence, all those noises get blotted out and it's just you and your mind to think. Imagine that and looking at perfect surf. A nice solitude. Photo: Matt Clark 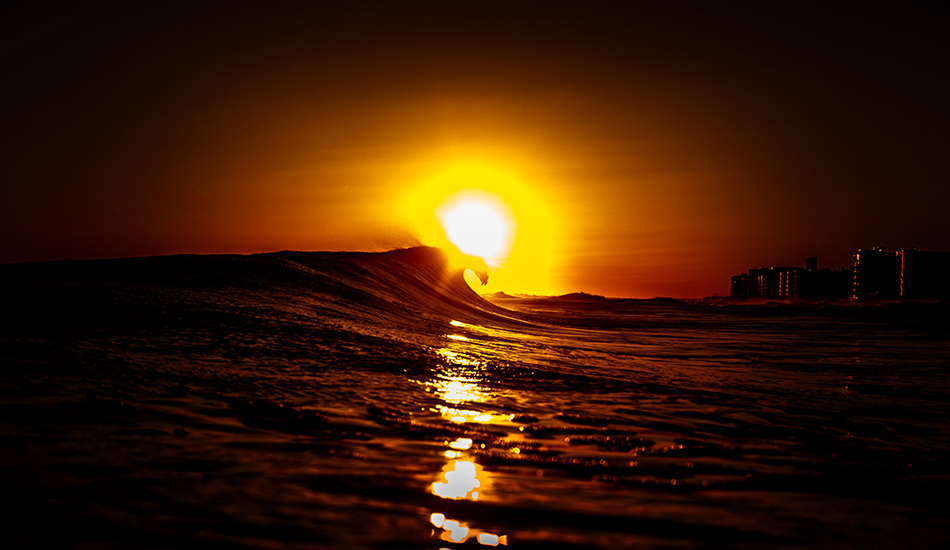 New York. Looks nice and summery doesn't it? I took this in March. It's our coldest month, water-wise. The water temperature was 41 degrees this day. Chilly to be swimming around shooting sunset surf photos, but it's always been worth it. Photo: Matt Clark 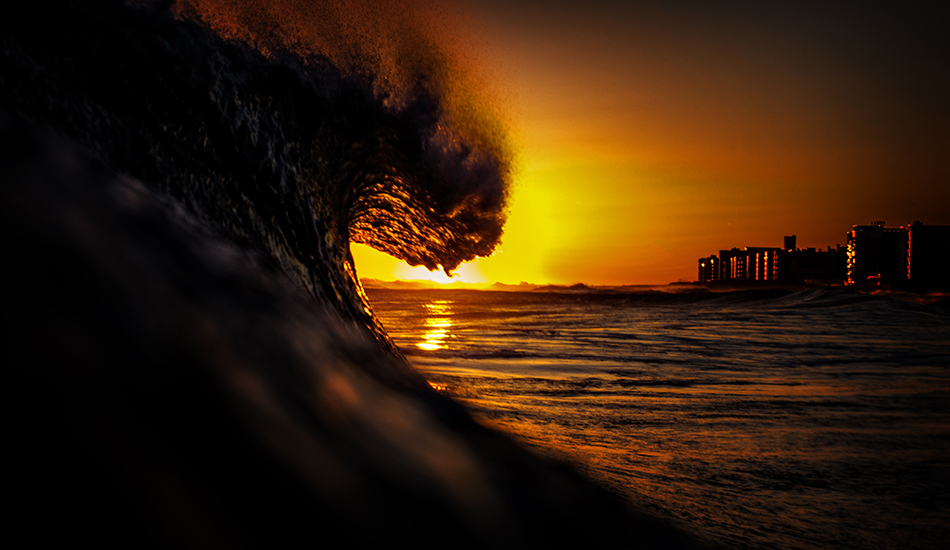 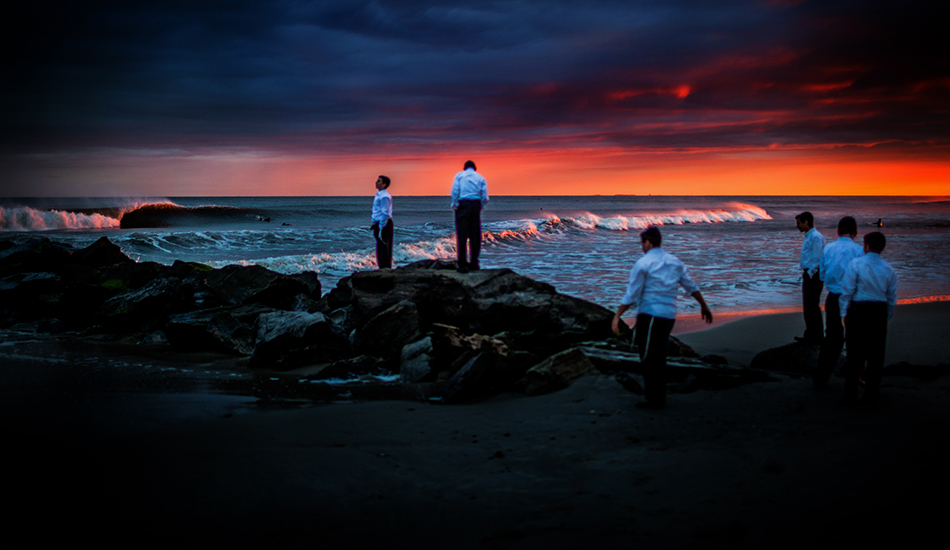 This was September 2011, when we had consistently warm surf all through the month of September. It's one of the months we all look forward to. There's the change of seasons that takes place, easing into the best time to be in NY, the fall. It's sunsets like this and waves like that which draw people who don't surf right to the water’s edge. Photo: Matt Clark 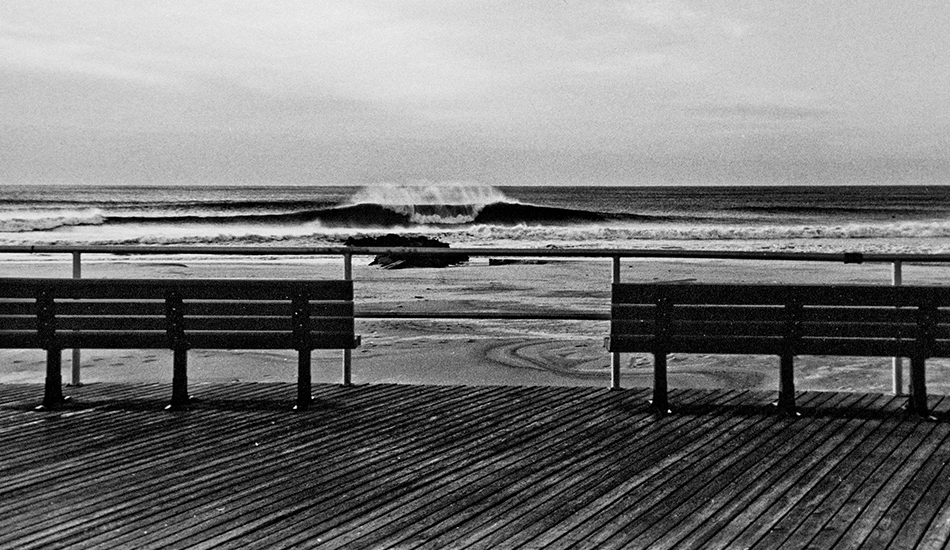 Classic New York: The boardwalk, the benches, the frigid black a-frame. This is the day we wait months for. Photo: Matt Clark 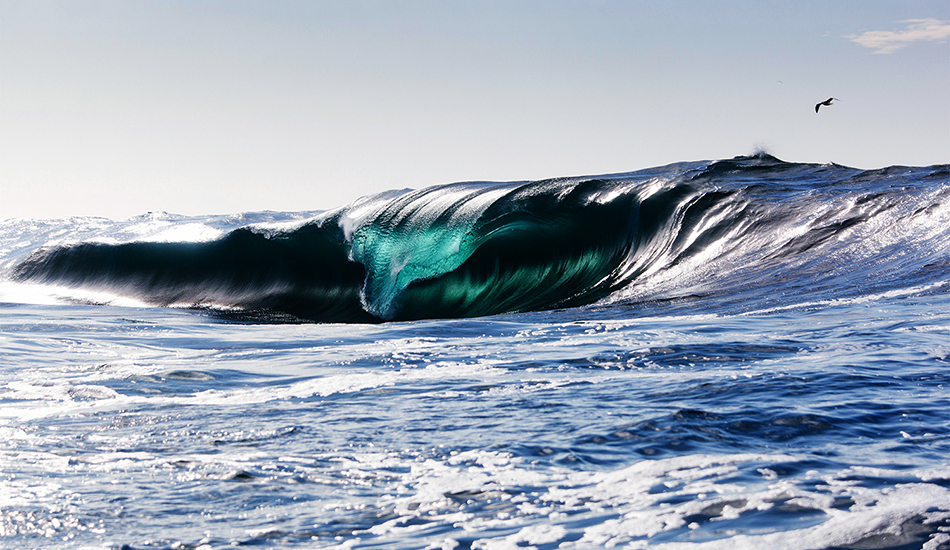 This is a wave they call the Yeti. It's been there for who knows how long but people are really starting to push it there. That wave makes a really scary noise when it breaks: it's the sound of the weight of water. There's this deep growl when a wave breaks and is this big and heavy. It's the ocean groaning. Photo: Matt Clark 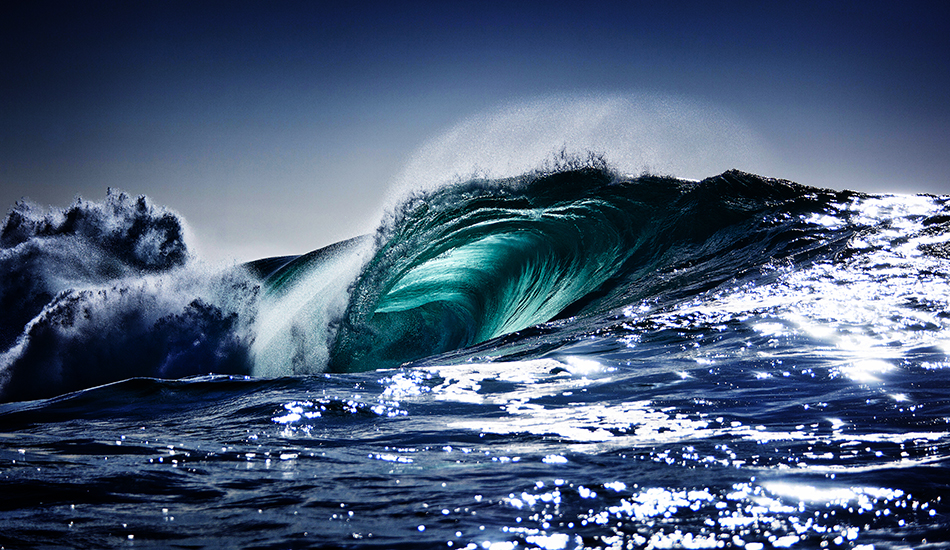 Another beast at the Yeti. A different way of making something ugly look pretty through Photoshop. It's the original image but I've given it a bit of life, I think that's my specialty and why magazines don't love me very much. I bring things to life and not only capture the moment, but stylize it in a way I see as artistic. Some people don't like my photos though, that's okay too. Photo: Matt Clark 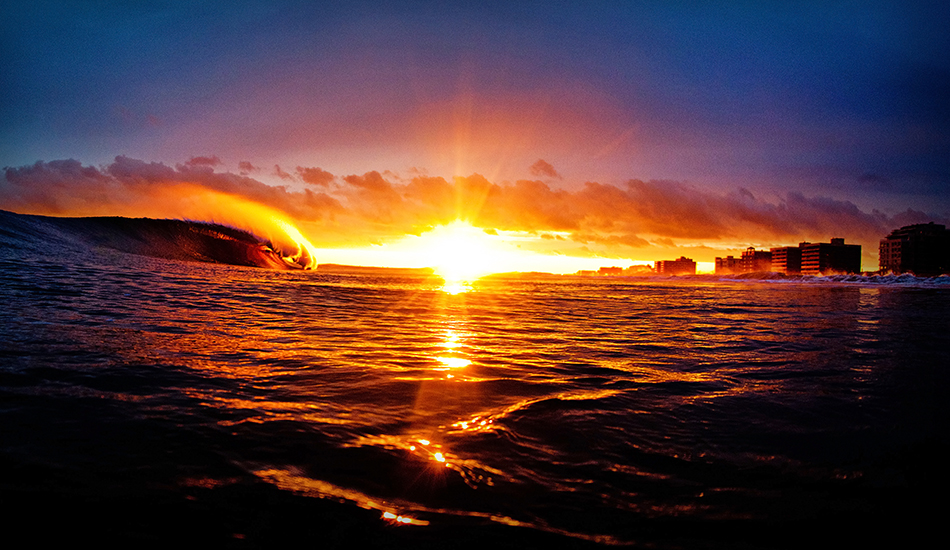 The time between when the sun dropped below that cloud line and when it dipped under the horizon was 14 minutes. Fourteen minutes swimming around with this incredible light. It just gives you an idea of what happens when everything comes together. Stormfront, sunset, perfect a-frame that pitched enough, and me in the right place at the right time. Photo: Matt Clark 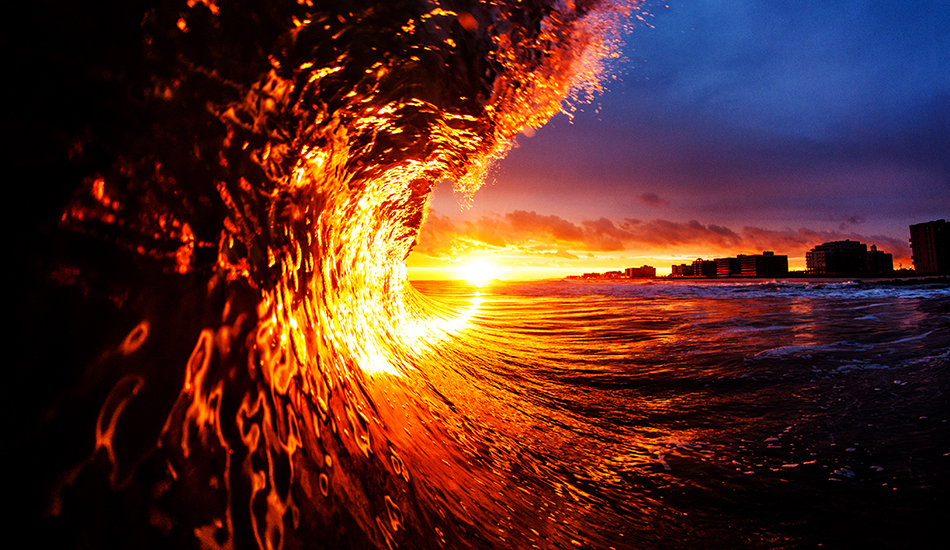 This is the first image of a two image sequence that changed my life. This photo is much less popular and seen but I think it's beautiful nonetheless. Long Beach, NY sunset. There's an amazing little town right there, it's got a lot of personality and a lot going on. Photo: Matt Clark 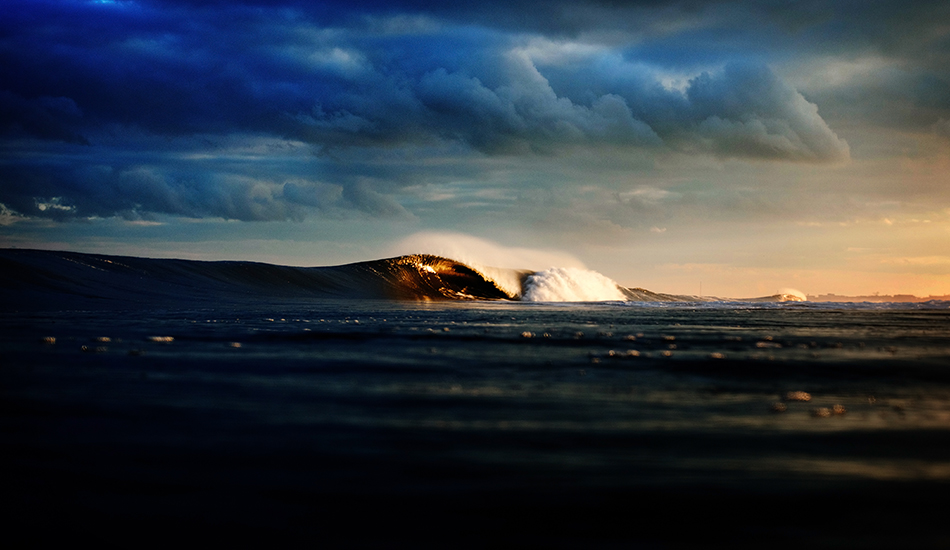 I named this image Jersey Moon Landing. I'm not quite sure but that's what came out when I needed to give it a name. Do you feel the same way? I love the light that New Jersey gets. They get some serious current just like in NY and it can be a pain in the ass to swim there, especially with a 6/5/4 booties and gloves on. Photo: Matt Clark 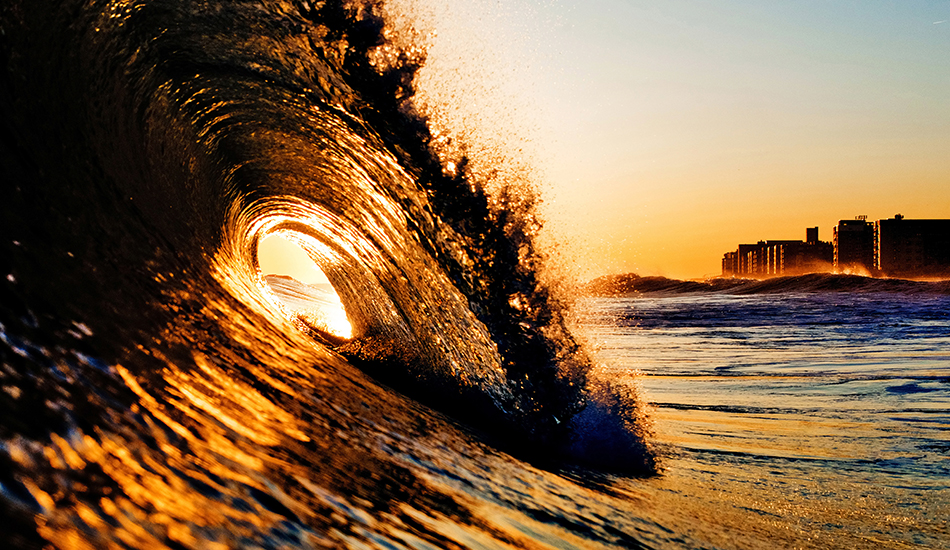 This is the spot where everyone from the East Coast surf when they think New York will be good. I don't know if the buildings in the back are a novelty anymore. I've seen some amazing images around the world with buildings and surf in the same frame, I don't think saying it's New York has worn off yet, but it might be getting a little lame. Photo: Matt Clark 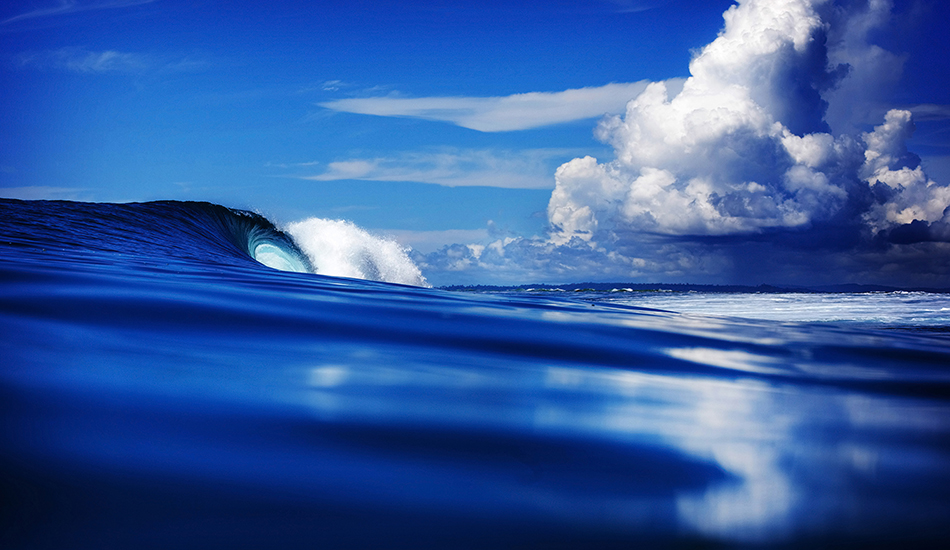 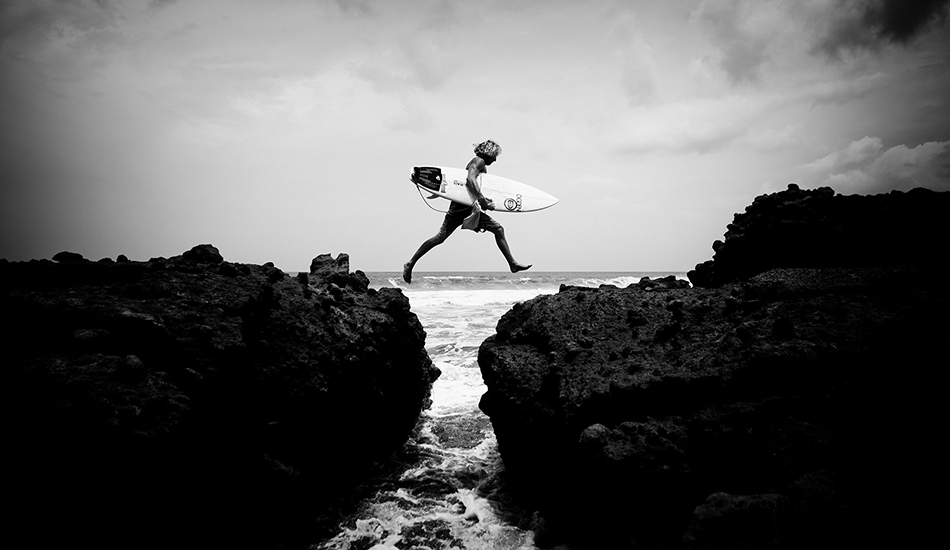 Here's an image that, to me, captured the surf trip I was on. We were in Nicaragua and were having a bit of trouble with scoring the winds and waves we wanted and every single day was a journey. I was sweating 24/7 this trip. There was this opportunity to get the guys to jump this little chasm in the reef and Leif Engstrom nailed it perfectly. Surfing is exploration, facing fears, and pushing boundaires and I thought this captured it in a fun way. Photo: Matt Clark 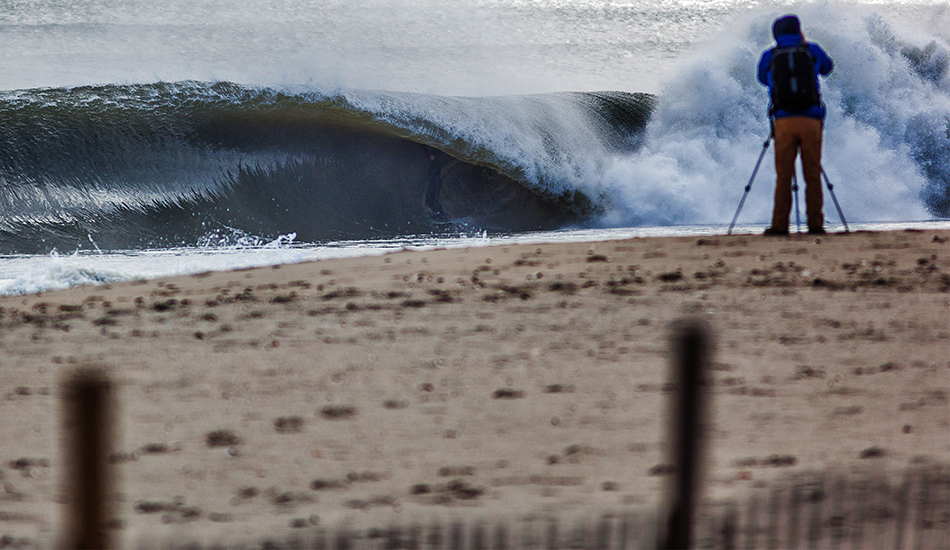 Sam Hammer posing for the photographer. How cool is this? A dredging, dugout barrel in a couple feet of water in the middle of winter. Classic claim, stand up barrels as they say. Photo: Matt Clark 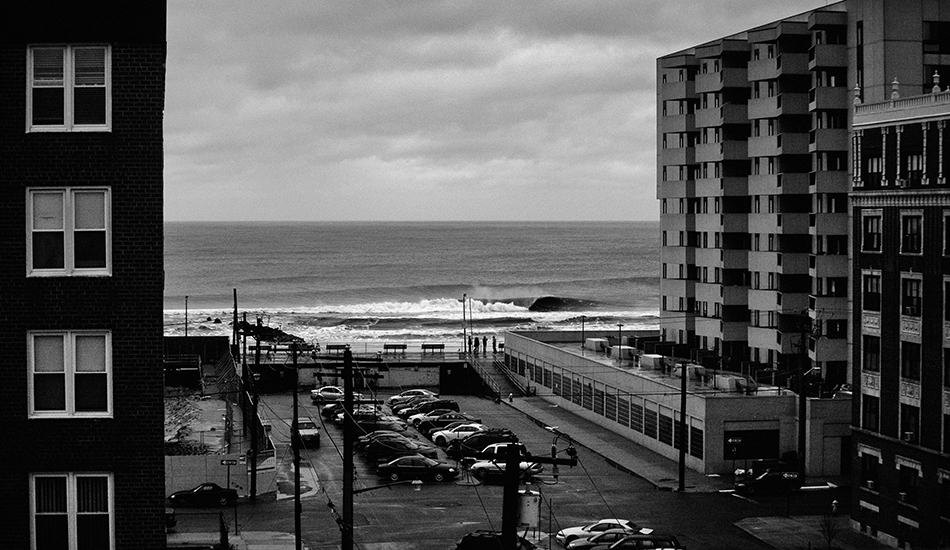 I drew this image out before I ever got the opportunity to take it. This ran as my first double page spread in Surfing magazine. Man was that cool. Steve Sherman called it an iconic shot! I later used this image in my submission for the Follow the Light Grant in 2007 which I will forever be proud of being the recipient of. Photo: Matt Clark 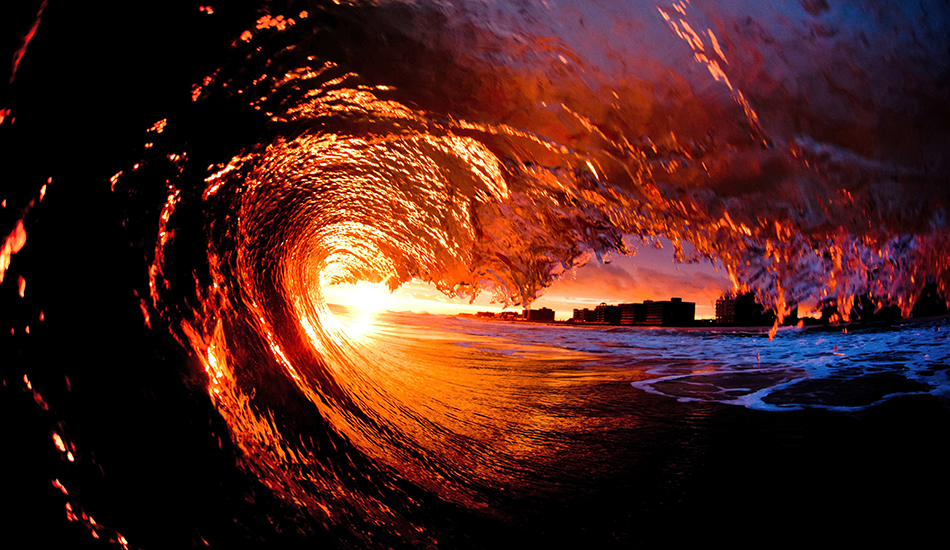 This is the face of the Quiksilver Pro New York, the biggest surf contest in history in the greatest city on Earth. This image taken in 1/800th of a second literally changed my life forever. I can't tell you how glad I am that I decided to shoot water photos this late afternoon and that I captured this. Photo: Matt Clark

The Atlantic ocean’s salty breeze never carried far in New York. Tucked between concrete slabs, hot summer days passed by for many years without a single grain of sand or cooling bead of salt water ever touching Matthew’s skin. Sometimes there’s no explaining where the unquenchable thirst for that sea-spray anchors itself in the mind. Sometimes it’s just the dream of adventure, the calling of the wild, or the struggle for a creative outlet that has one being drawn to a life less ordinary. How and why a New York City schoolboy found himself daydreaming of far off places and crashing blue surf is unknown. Why those real life images, never seen in person, were tugging at his chest can’t be said. All we know is that the ocean captured him one day, held on, and has yet to release.

Matthew was awarded the 2nd Annual Follow the Light Foundation Grant presented by Surfing Magazine in 2007. He’s currently represented by galleries both in the U.S. and Internationally. Matthew’s images can be found anywhere from the cover of a magazine to the NYC transit system, from the streets of Paris to the center of Times Square. His cinematography has been featured in Innersection as well as SIGHT|SOUND which was nominated for best cinematography at the Surfer Poll Awards 2011. For such a young artist, he’s building his international reputation as one of the most artistic and photographically inclined people in the surf industry. Matthew also designs jewelry, runs and operates his own clothing label named “Naff le Skell“, illustrates, writes, and works as a cinematographer.