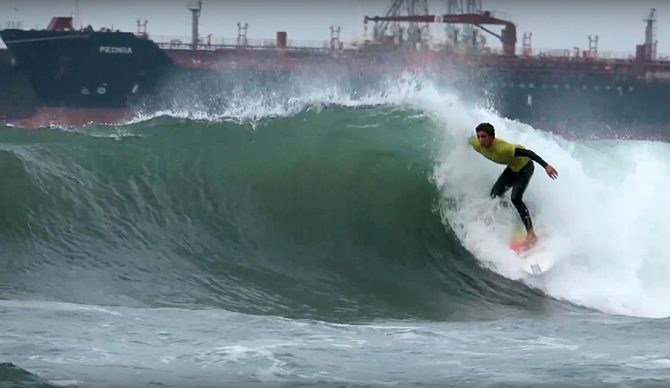 A surf spot is in danger of being destroyed in Portugal after the Minister of the Sea, Ana Paula Vitorino, announced the 300-meter extension of the breakwater and deepening of the entrance channel, anteport and rotation basin of the Port of Leixões. If nothing else, let this be a case study to surfers around the world of how easily waves can be threatened anywhere.

In April of last year, a group of surfers protested against the project, warning that the prolongation of the jetty would end with the waves of Matosinhos. However, the work is set to go ahead anyway with the minister announcing an investment of €43.4 million with the Turkish investor Yilport. That investment alone is just a drop in the bucket, though, as the entire port is receiving more than half a billion euros to increase its capacity and an entirely new terminal to receive bigger ships. Some projects are already underway and expected to be finished by 2021 while the entire port project is scheduled to be completed by 2026 as certain plans are in the engineering stage or await environmental impact assessments.

The minister was unable to give a definitive answer in order to ensure that surfing won’t be compromised on Matosinhos beach, but insists there will be compensatory measures for all who live on the “economy of the sea.” To that end, there are reportedly €2 million set to be applied as compensations. Businesses that have to move “will be reimbursed of all expenses.” While the issue is greater than simply settling a matter of finances, even those numbers represent a matter of bread crumbs as compensation to the local community.

This is a situation that obviously displeases the local surf community, with the future of their livelihood hanging in the balance. The Association of Surfing Schools of Portugal (AESP) argues that the extension of the current breakwater will reduce between 40 to 60 percent of any particular swell’s intensity in Praia de Matosinhos, in addition to likely increasing pollution and intensifying erosion south of the beach.

Political decisions on this scale deserve public discussion, taking into account the importance of environmental factors as well as the thousands of people who’ll be directly or indirectly affected. On March 6, the Municipal Executive of the city of Porto unanimously approved a motion that calls for re-evaluating the Port of Leixões project and its impacts. Meanwhile, a campaign was initiated this week, “Diz Não ao Paredão Matosinhos Merece Melhor” (Say No to the Jetty, Matosinhos Deserves Better), which has already garnered hundreds of shares and plenty of attention on social networks. A website has since been created to give the people a voice on this issue and aims to inform people of the potential consequences of the project.

The Administration of the Port of Leixões (APDL) acknowledges surfing as a part of the community and economy here, and in their own promotional video for the project they included it as an activity to be considered in the development of the port. This is proof that the surf community carries some weight in the region and if organized, can be an obstacle in seeing this development through as planned. Tourism in Portugal is growing but it’s not strong enough to implement a governmental policy preserving this pastime. It’s totally contradictory to publicize the natural wonders of the country and then destroy them in the name of money.

Note: You can find the petition to save Matosinhos here.  This piece was made with contributions from BeachCam.