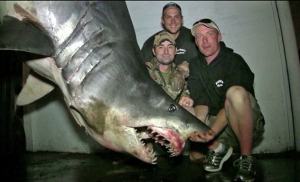 A portrait of the shark with its captors. Photo: KTLA.com

Yesterday, a 12-foot long, 8-foot in girth, 1,300-pound shortfin mako shark was caught about 15 miles off the Huntington Beach coast by a group of fishermen. According to a report by KTLA, this could be a world-record setting catch. However, the exact weight and how that stacks up to the current world-record holder has yet to be determined.

The average, mature shortfin mako shark is said to weigh about 300 pounds. Being that far above average, methinks this particular shark must be the king of the (underwater) jungle. Stats aside, the shortfin mako is not known to treat docile humans as prey, unlike their Great White counterparts.

If you think that’s crazy, take a look at Kimi Werner riding Great White Sharks. This guy was in a boat. She’s on top of a Great White. Which proves we can co-exist, peacefully.

KTLA posted this video of the fishermen describing the shark and the moments before, during and after they caught it.