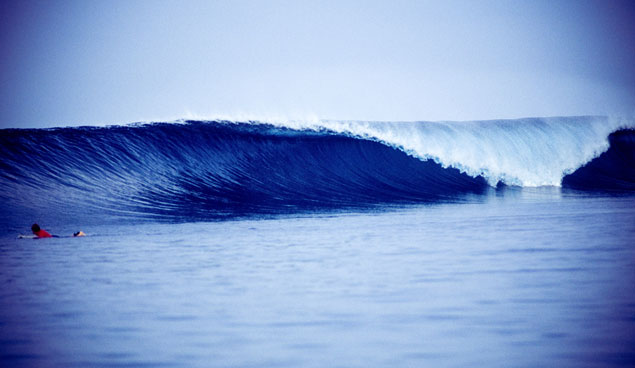 The future of the Mentawai islands, both as surfing destinations and developing communities, currently sits on the razor’s edge. While tourism reforms are stalled in parliament and desperate fishermen blow chunks out of the reefs with bundles of black market dynamite, a war for the surf resources of the island quietly rages behind the scenes. On one side, the Mentawai regency government is revising a set of laws (Perda 16) that, by favoring land-based tourism will theoretically allow local Mentawaians to profit from their surfing resources, something they have heretofore mostly achieved by way of handouts from surf charters. On the other side, some charter boat captains are trying to figure out the best way to either flout or circumnavigate any restrictions that the government can come up with. Somewhere in between, resort owners have aligned with the government against said charter captains in an effort to regulate their access to certain waves. In the meantime, all three actors are feeling the creeping menace of “feral” surf campers whose encroachment into the islands/market threatens to destabilize what is an already shoddy house of cards.

Foreign intervention of the economic and military sort has a long and hair-raising history in Indonesia. It hit its nadir in 1965 when the US staked the dictatorial regime of Suharto in his overthrow of Sukarno. The resulting blood bath saw an estimated 500,000 to one million souls sent to their makers for the sin of being aligned with certain political parties. The scaling down of the Cold War in subsequent years caused the big powers to lose interest in Indonesia just as the surfing powers were beginning to recognize the potential of the island’s reef passes for producing world-class waves.

Various Indonesian governments have been trying to regulate the ever-growing industry since the mid 90’s with very little success. The first decree, in 1996, established five surf zones and a charge of $5.00 per day for visiting surfers. Its fatal flaw, as with subsequent legislation, was that the government was either unable or unwilling to enforce it. It is, however, notable for establishing a precedent that has characterized all subsequent surf tourism law in the area – general flouting on the part of much of the surf industry. According to Jess Ponting who has studied the area and helped consult on the tourism laws for over two decades, the failure of the 1996 decree “set the tone for the Mentawai charter fleet strategy to defeat all attempts to regulate them through overwhelming non-compliance.”

In 2003 the democratically elected government tried again with the Perda 16 regulations requiring all tourism companies to obtain a license to operate, have a local office in the Mentawais, complete an environmental impact statement for their companies, and comply with a host of other requirements designed to actually put money into the local economy. Despite a raft of sensible reforms, its main problem, according to Ponting, was that it allowed just five management companies, meaning that many charter fleets would essentially have to merge or hand over some control to larger parent companies if they hoped to keep operating legally, essentially threatening the oligopolization of the market.

One man who complied with the government regulations was Jordan Heuer, owner of Kandui Villas. “We jumped through every hoop the government said we had to, and followed every rule, but the government never followed through in enforcing their own law, and since then utter chaos has broken out in the Mentawais due to an unregulated surf tourism industry,” he said.

At the same time that Heuer and others were snapping up the licenses, a group of charter boat companies, led by Martin Daly, of Quiksilver Crossing and Indies Trader fame, formed a coalition that went by the various names of the AKSSB and WBC. This organization represented an alternative attempt to regulate the market and represent the interests that charter companies believed were being trumped by those of the resorts. They opposed the Perda 16 reforms based on the claim that they were monopolistic and in violation of the Indonesian constitution and were backed, at least in spirit, by of the some of the most powerful men in the surf industry. Their defunct web site shows letters of support from surf industry stalwarts like Bob McKnight (Quiksilver), Rusty Preisendorfer (Rusty), Dave Jenkins (SurfAid International) and Bob Hurley (Hurley).