Remembering the Battle of Ocean Beach: Turns Out Surfing Lockdowns Are Nothing New 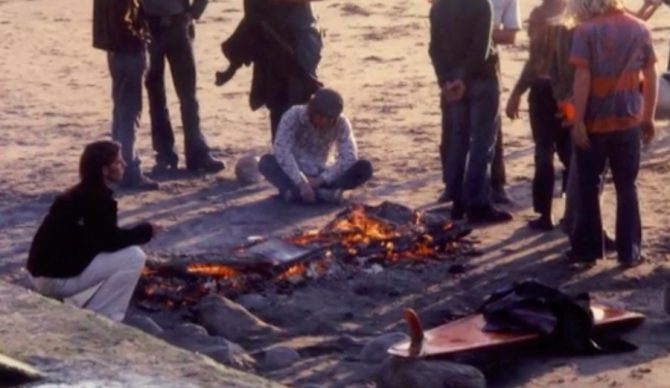 Surf culture in San Francisco was prolific, and authorities weren’t having it. Photo: Screenshot, The Great Highway

As the COVID-19 pandemic crisis continues, but with many of America’s coastal cities now relaxing their unprecedented “no surfing” edicts (Los Angeles County beaches were given the green light on Wednesday, May 13), I couldn’t help but think about the effect that “social distancing” has had on our surfing population. To many of those non-surfing Americans, once described by the legendary Phil Edwards as “the legion of the un-jazzed”, the fervor of outrage over such restrictions, peaking in the midst of a deadly global pandemic, might toggle between grossly irresponsible and downright silly. But to the legion of the jazzed — surfers for whom a daily go-out definitely qualifies as an “essential activity” — the idea of having Big Brother declare that surfing is forbidden presaged a dystopian nightmare that they just weren’t emotionally prepared to handle. Simply because most surfers today have never had The State, deep or not, tell them that they couldn’t paddle out.

But I have. Along with the rest of San Francisco’s surfing population, who, during the early 1970s, unknowingly labored under an antiquated city ordinance that outlawed going out past ankle deep in the Ocean Beach surf, and for a pretty good reason. Since the first cross-town trolley line began shuttling San Franciscans from the city out to the Pacific shore in 1890, said San Franciscans have been drowning in the rugged, bone-chilling Ocean Beach shore break. So many that by the early 20th century the city eventually enacted a strict “no swimming” law, designed to keep dutiful citizens safely on the sand, in the iconic Cliff House or, years later, risking a different sort of peril at the decidedly seedy Playland amusement park.

By the 1950s, however, this edict was being roundly ignored by a hardy handful of The City’s pioneering watermen, who took to the treacherous surf along the Great Highway in a variety of blue-lipped, mildly hypothermic applications. So by the time I moved there in the summer of 1970, despite the continued existence of a few faded “no swimming” ordinances still legible on the seawall, SF surfers felt pretty free to express themselves in well-attended lineups at spots like Kelly’s Cove and VFWs. A state of affairs that made the spectacle I witnessed one sunny, autumn morning in 1971 that much more bizarre. This was the day that The Man, frustrated, no doubt, by the city’s youthful counterculture and its widespread flaunting of so many of society’s conventions, decided rules were, in fact, rules, and any Age of Aquarius aesthetics be damned. Swimming, surfing…same thing.

The assault on the beachhead began when a mounted platoon of state park rangers, having ridden their horses down the concrete ramp in front of the VFW hall, began working their way north towards the seawall congregation at Kelly’s Cove, then the epicenter of the City surf scene. It was here that San Francisco’s surfers, mingling with the requisite hippies, conga drummers and space cadets on the steps of the curved seawall, hung out between sessions, drying out their beavertails around smelly beach fires. And now many, seeing the cavalry approaching, began slipping back into their neoprene, anticipating, with era-appropriate relish, the upcoming confrontation. They got it, alright.

As soon as the head ranger hauled back on his reins and recited the “no surfing’ proclamation, a good half dozen surfers grabbed their single-fins and bolted for the water. The rangers, initially caught by surprise, hit their spurs and thundered after them, sand flying from the hooves of their mounts as a delighted crowd on the seawall began cheering for the broken field runners who, with the authoritarian horsemen in hot pursuit, zigged and zagged toward the safety of the shore break. Which, as it turned out, wasn’t all that safe. In what was obviously a carefully coordinated “land and sea” operation, from behind Seal Rocks came a large Coast Guard hovercraft — that’s right, a hovercraft — powering into the Kelly’s Cove lineup, skidding back and forth in an attempt to drive the miscreant surfers to shore. Predictably, a big set popped up, catching the crazy-looking craft inside, and as it punched through wave after wave, miraculously avoiding crushing the frantically paddling surfers, cheers and jeers from the Summer of Love’s spawn on the beach reached a fevered pitch. How could this get any better? 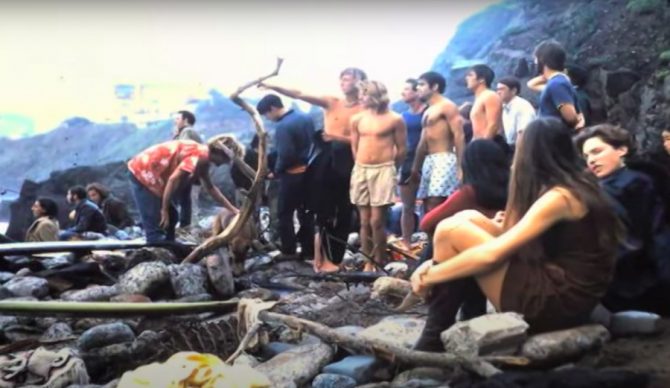 Surfers were chased off the beach by police, helicopters, and…a hovercraft? Photo: Screenshot via Mark Gunson

Or worse, depending on your familiarity with the term “Orwellian.”  Because just as the remaining surfers, who, taking advantage of the ensuing chaos, grabbed their boards and sprinted for the water, a sheriff’s department helicopter swooped down over Sutro Heights, hovering over the beach like some giant bird of prey.  The pilot, whether well versed in crowd control or just plain nuts, then angled the trajectory of the copter’s whirling blades, setting up a violent vortex that blew the boards right out of the hands of those surfers not yet run down by the mounted patrol. An extravagantly dangerous tactic that made the State’s intention perfectly clear:  by land, sea, and air — no matter what it took — these subversive surfers were going to be stopped from putting themselves at risk.  Even if it killed them.

I hadn’t thought about that crazy day in many decades, not until a week ago, watching Baywatch clear a local lineup of recalcitrant surfers in much the same manner as did the hovercraft all those years ago. But this morning I saw a sign at the beach that read, “Los Angeles County Beaches Reopened. Allowed: Surfing and Swimming”. Big Brother’s repressive regulations had finally been lifted, just as they eventually were in San Francisco just a short time after the Battle of Ocean Beach. And so today, like then, despite all the indignant outrage and clarion calls for civil disobedience, the dystopian specter of a non-surfing future will quickly be forgotten, washed away with each successive ride.

Learn more about San Francisco’s surfing history by watching Great Highway: A Journey To The Soul Of San Francisco Surfing. The film is also available on Amazon Prime.