Cool Waves and a Tasty Buzz: Researchers Find Honey Bees Surf on Waves Created by Their Own Wings 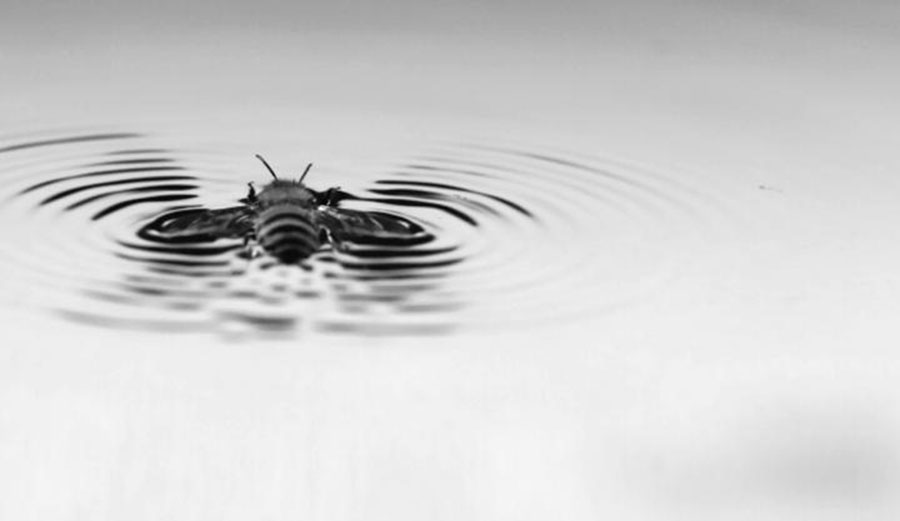 Remember all those times when you were swimming around and you found a bee struggling in the water? You probably did one of two things: swam away quickly, or did that thing where you scoop the bee up in the cupped palm of your hand, hoping you’d scoop enough water up with it to keep it afloat long enough to be deposited somewhere dry. Well, according to new research, you were probably totally burning that bee. Engineers at the California Institute of Technology who were looking closely at drowning bees found that they were actually creating waves with their wings and — this is the cool part — surfing on them.

A research engineer named Chris Roh started the whole thing when he happened to see a honey bee struggling in Millikan Pond on Caltech’s campus. Because the sun was at just the right spot in the sky, it cast shadows on the bee, which allowed Roh to notice the tiny waves the bee’s wings were creating. Roh talked to his advisor, Mory Gharib, about it, and they decided to do an experiment.

Roh took 30 bees and stuck them in a water-filled pan. He shone a light straight down on them to see their shadows on the bottom of the pan. See, when a bee hits the water, its wings get covered in it, making flight impossible. But those water-covered wings also make the bee’s frantically buzzing wings drag through the water, which creates waves. Those waves propel them forward, hopefully towards safety.

Here’s the weird part: one might think that the waves would expand in a circle moving away from the bee, but one would be wrong. Roh found that a larger wave is generated at the rear of the bee while the water in the front remains calm in comparison.

“The motion of the bee’s wings creates a wave that its body is able to ride forward,” said Mory Gharib in a statement about their findings. “It hydrofoils, or surfs, toward safety.”

The study was recently published in the Proceedings of the National Academy of Sciences. Researchers filmed the bees in the pan of water and slowed the footage way down. “Slow-motion video revealed the source of the potentially life-saving asymmetry,” a release from Caltech stated. “Rather than just flapping up and down in the water, the bee’s wings pronate, or curve downward, when pushing down the water and supinate (curve upward) when pulling back up, out of the water. The pulling motion provides thrust, while the pushing motion is a recovery stroke.”

Researchers estimate that they can’t keep it up for all that long, though — about 10 minutes, which hopefully will be long enough for them to find the shoreline… and maybe get a little tiny bee barrel.