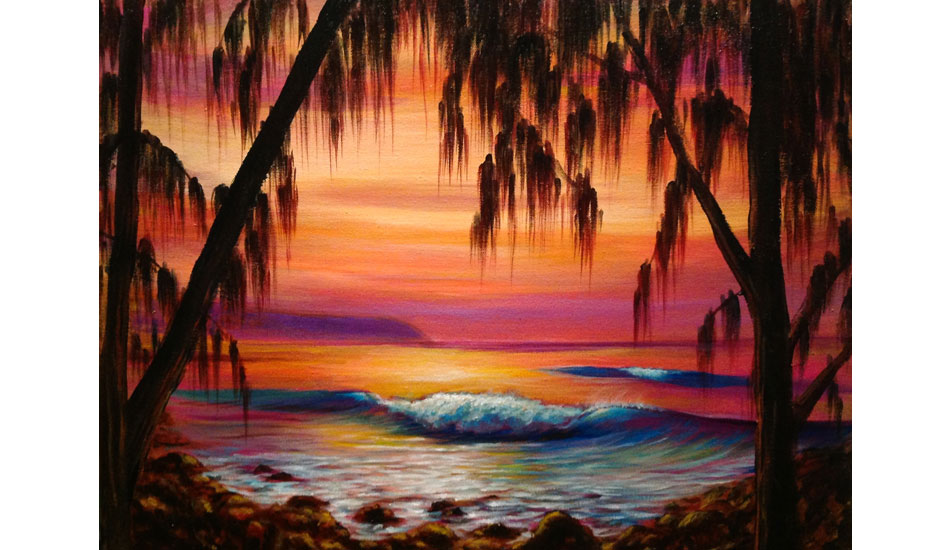 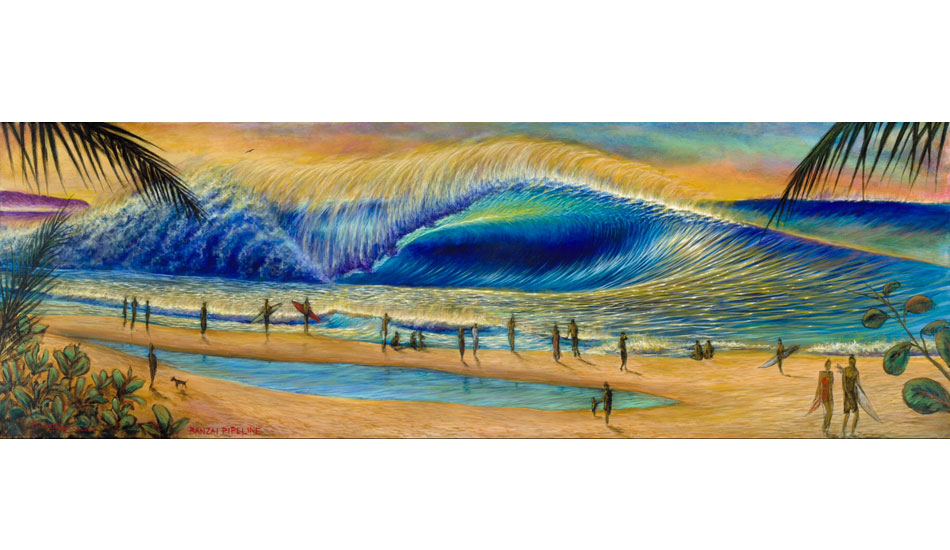 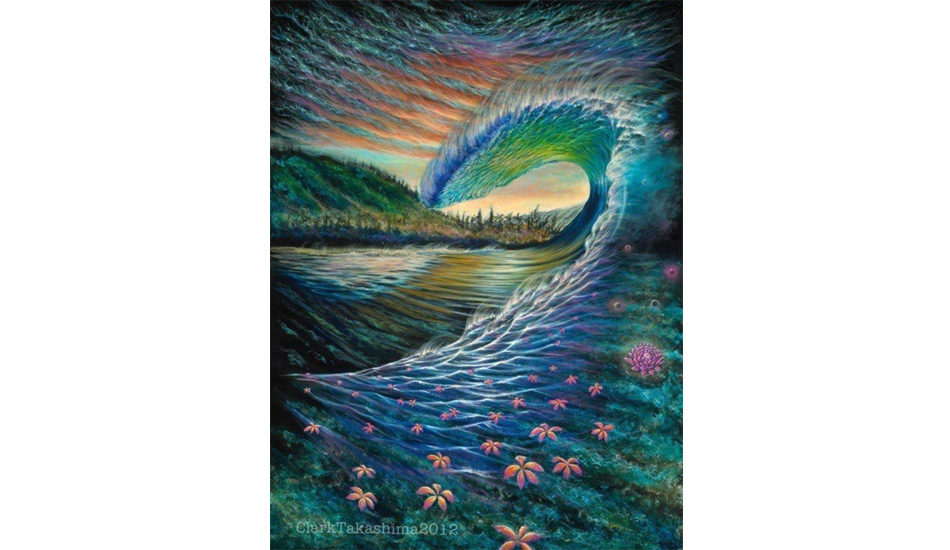 "Soul Most Known." This piece was the first large work I did since my wife passed. I painted it while living with Buttons Kaluhiokalani at Sunset Point. It depicts our world within the universe to reiterate the "all is one" theme. At the top, it shows how the structure of the universe is similarly structured as our brains. The lotus flower is giving off marbles of wisdom in the colors of the chakras but aren't aligned. It's a statement about society and how many of us work towards alignment. The plumeria are symbolic of how a paddle out is a life celebration and not a funeral. With the passing of first my wife, then Andy months after, then Sion, and last year Buttons, this piece has been more relevant to the fact that we are souls with bodies and energy never dies. As my creativity hit an all-time low, I found myself dismissed from Wyland Galleries and began exploring ancient teachings to find out where "souls" go after you pass. During this research, I stumbled upon information that led me down different hallways of knowledge. One area of learning leading to another. Quantum physics, the Golden Mean, the Fibonacci Sequence, the spirituality of the Sufi and Toltec ways. This knowledge was guiding me, healing my grief and spurred me on to keep painting. "The Universal Soul Series" is actually a documentation of this seeking. 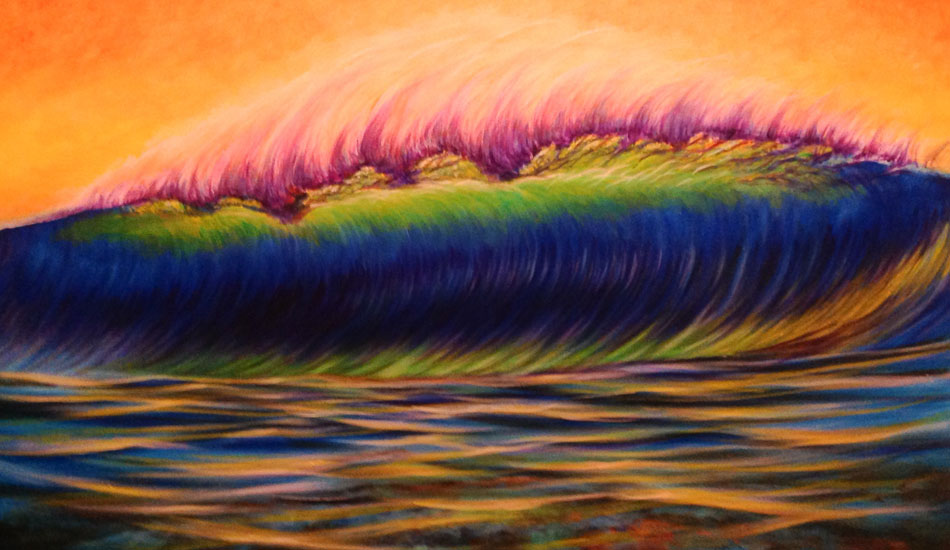 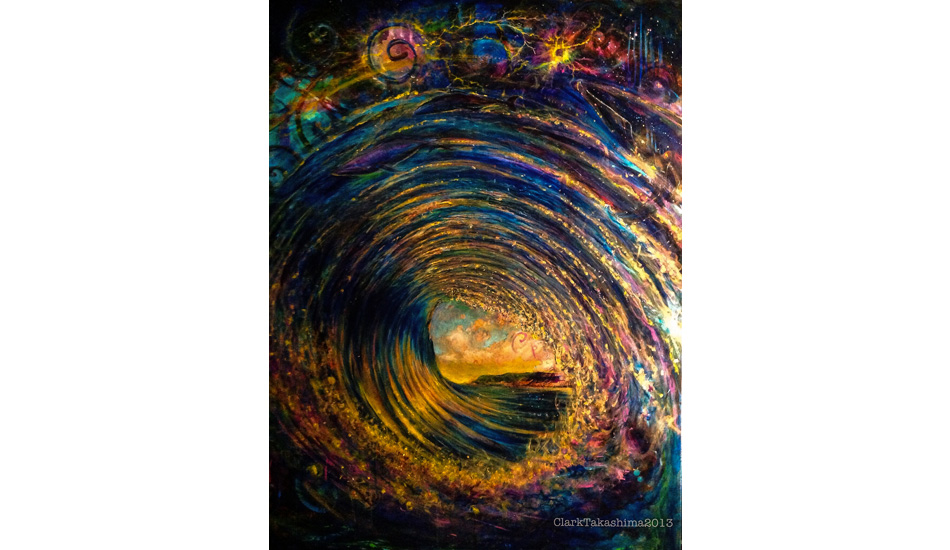 "Flowing in the Bowl." Life's defining moments. 36" x 48". This one is about connections. Our connection to the ocean, to all living things, to source. Life is a flow. Being in the barrel is a great example of decision making and acting upon those decisions in an instant. 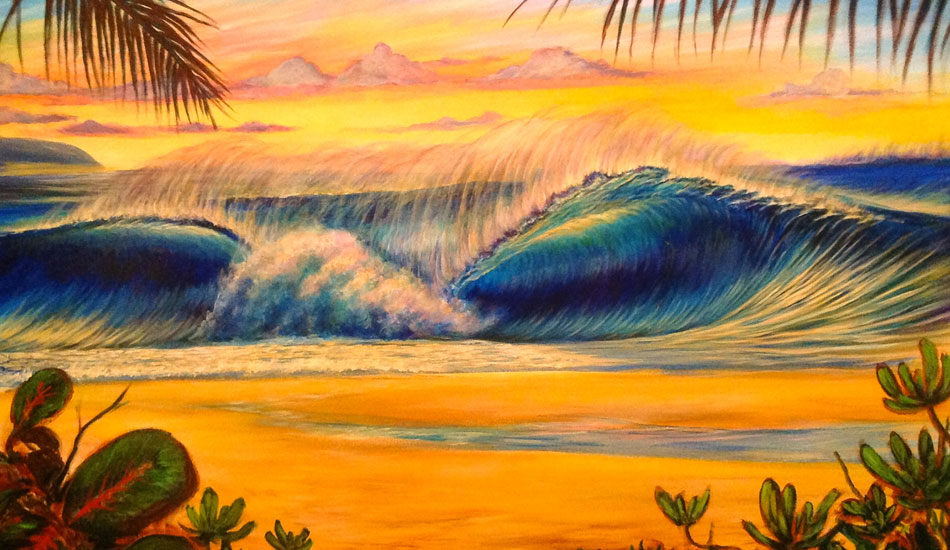 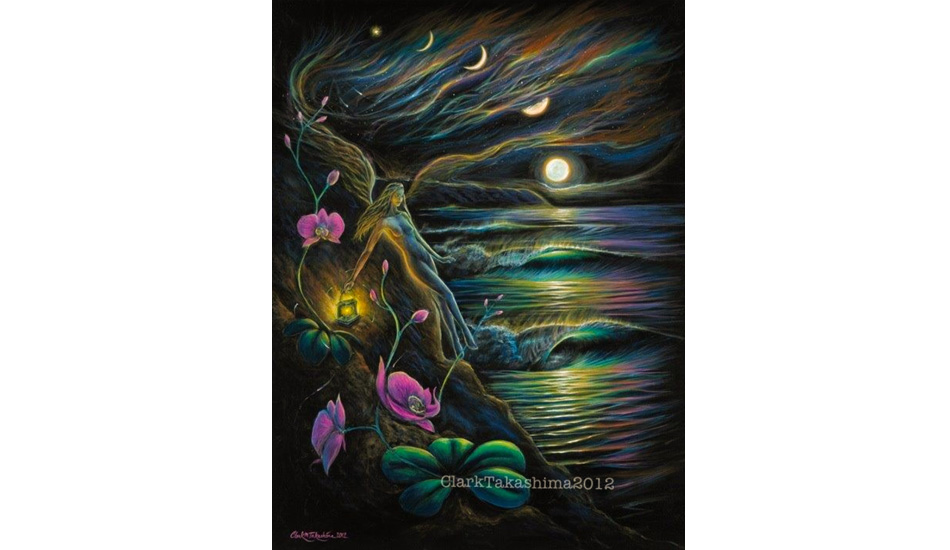 "The Wind Without." 24" x 30". 2012. Time is an illusion and how everything we experience is made up of more space with energy binding things together on the quantum-level physicality. 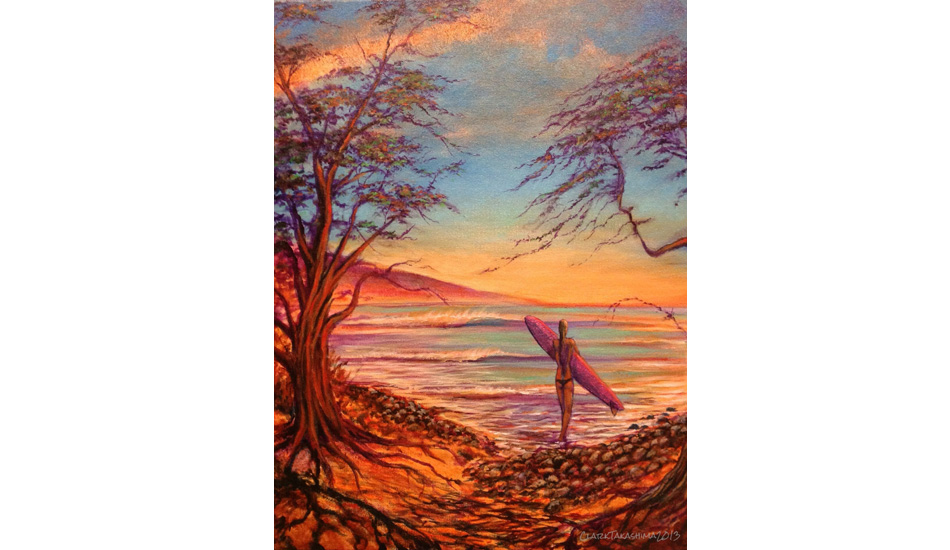 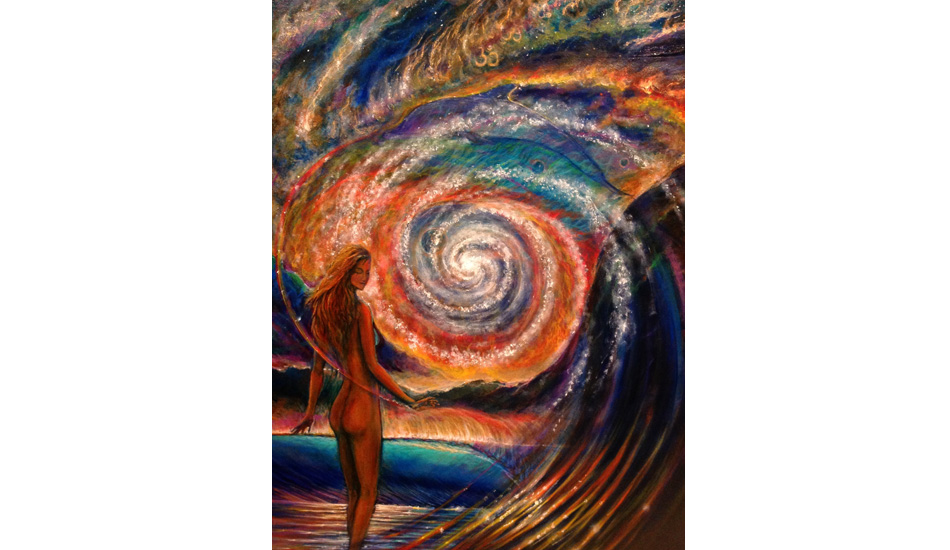 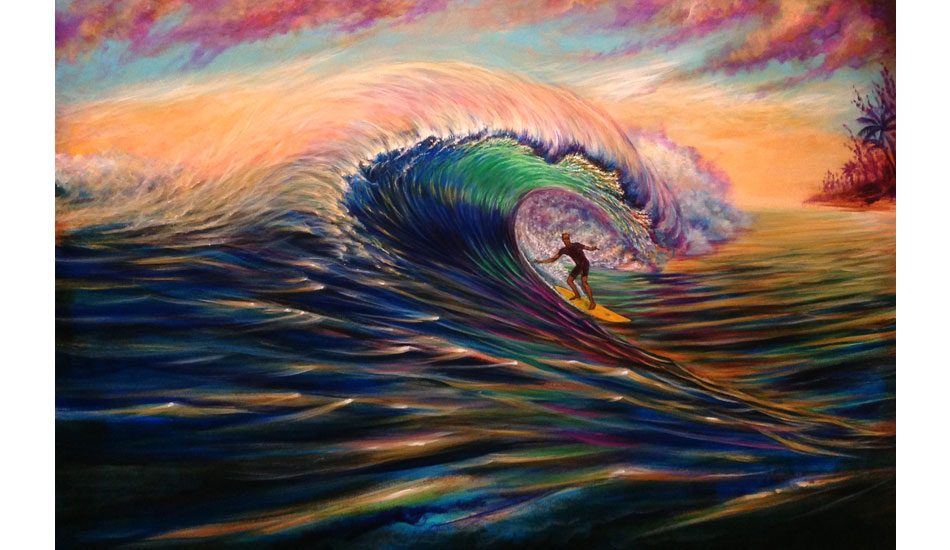 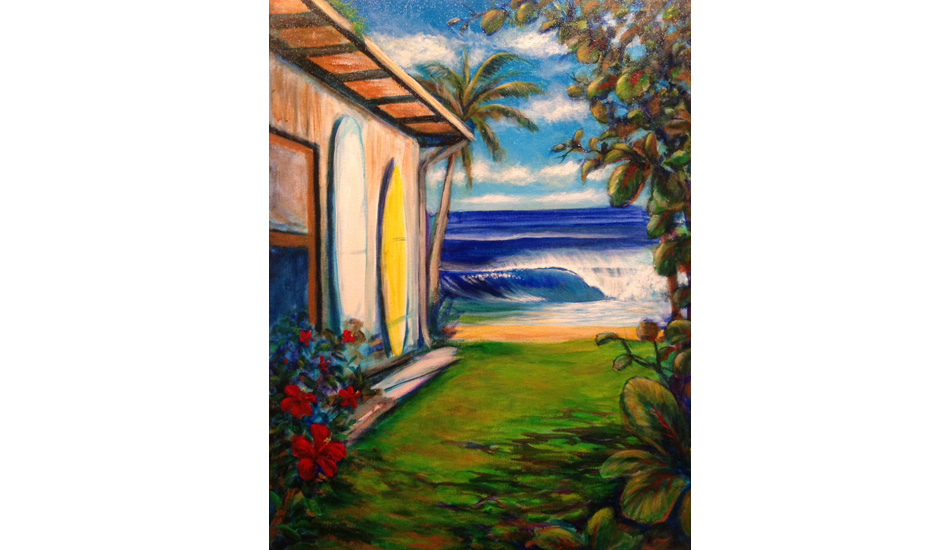 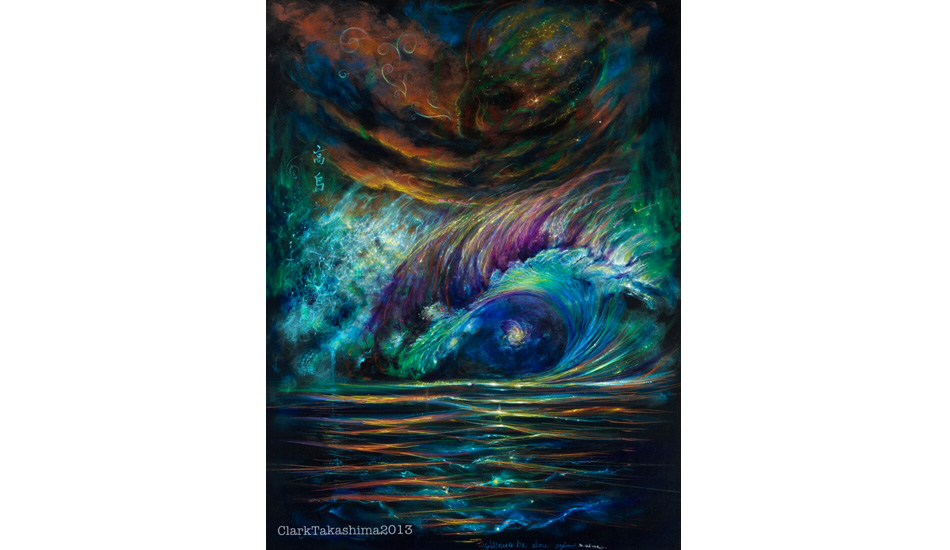 "You Will Never Be Alone Again." 36" x 48". I look at these sometimes subtle seekings, blatant struggles of loneliness, and the flow of love going down all around me. I watch as information is passed between lighted phones, computer screens and people. Magic without the illusionistic smoke and mirrors, true magic. Seeing swells hit the shore, listen as the winds barrel down Waimea Valley in starship stealthness, rustling every treetop and plant on its wanderings toward the feathering lips exploding through the semi-permeable surfaces. Stars and clouds quiet-amazingly accurate in their relatively slow-shifting journey. Energy, all energies. Primal and infinite. The challenging crashing wave like words and actions born of the forgiving calm and fierce temperatures which it was created. Silent vibrations beginning as thought seeds grown into music and vegetables. At the top of the work, a fetus head had appeared, face small, head large at center the Pineal gland. Out of the fetus' closed lips come the swirls of Fibonacci. With this painting, I set out to not delve into overdrive details, but to loosely form with colors, painting the light off its blank dark void. There are many questions that are asked in our quest of life and spiritual paths. Seekings, struggles, and flows intangible. The title came before the painting in its underpainting stage, where i did a two step written painting. I wrote in paint all the frustrations and heartaches involved with Porkchop's illness, passing, and going on without her until now. After I blacked out/blocked out the canvas, I wrote again words of realizations and wishes. "You will never be alone again" came from fully feeling the presence of source. The feeling of wholeness that can only be described as love. The same love exchanged, the same love of self, which is all the same love without physicality. Not only our love of all that is physical...Our souls source....is always with us. so don't hold your breath, just breathe easy....when no one is around to say those dreamy three words, everything around is there to show you. 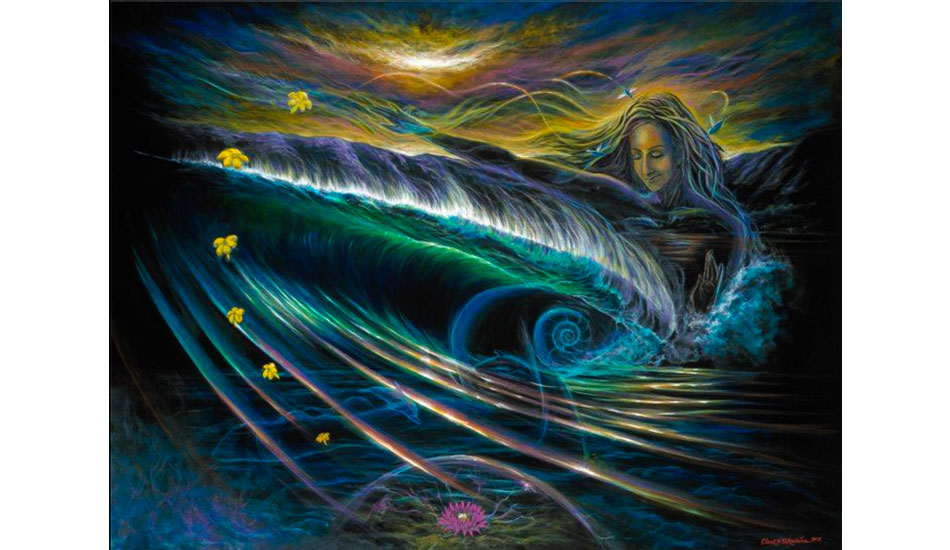 "Universal Soul." 36" x 48". Original layered glaze acrylic with iridescent and gold highlighting on canvas. She is the feminine wisdom and intuition source. This painting dedicated to all the loves whom are mothers and our earth. Energy is the focus. Waves higher than the tangible. As within all the Universal Soul Series of paintings, the palette for this work is inspired by the colors from the Hubble Telescope photographs. The reminder that we live, connect and breathe in this one universe and those present in the real illusion of rainbows (where water and light make love) brings the universe closer to earth. 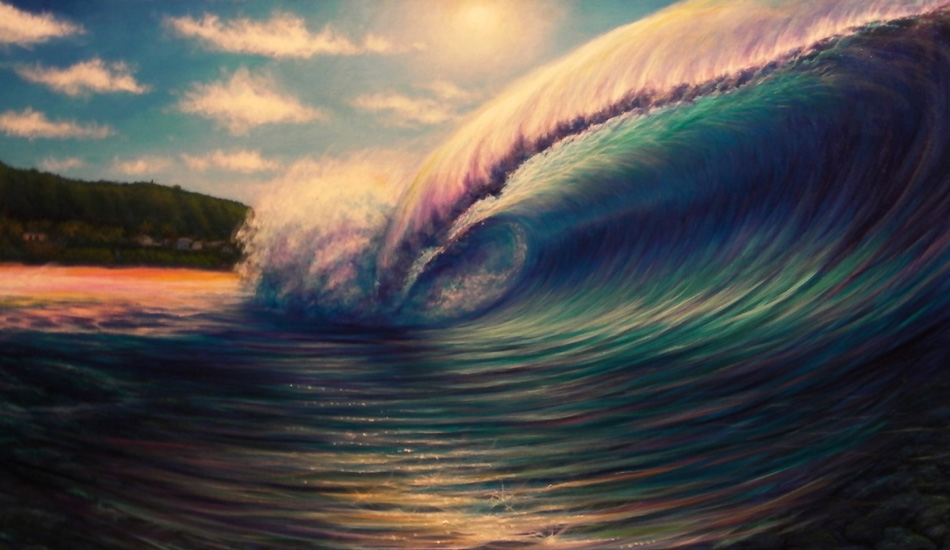 Pipeline, Hawaii. 2008. This is a hand highlighted version from the "Dream Tour Series" where I did eleven 24" x 48" depicting all the surfing locations on the 2008 ASP World Tour. More on the Dream Tour Series here. As my creativity hit an all-time low, I found myself dismissed from Wyland Galleries and began exploring ancient teachings to find out where "souls" go after you pass. During this research, I stumbled upon information that led me down different hallways of knowledge. One area of learning leading to another. Quantum physics, the Golden Mean, the Fibonacci Sequence, the spirituality of the Sufi and Toltec ways. This knowledge was guiding me, healing my grief, and spurred me on to keep painting. "The Universal Soul Series" is actually a documentation of this seeking. 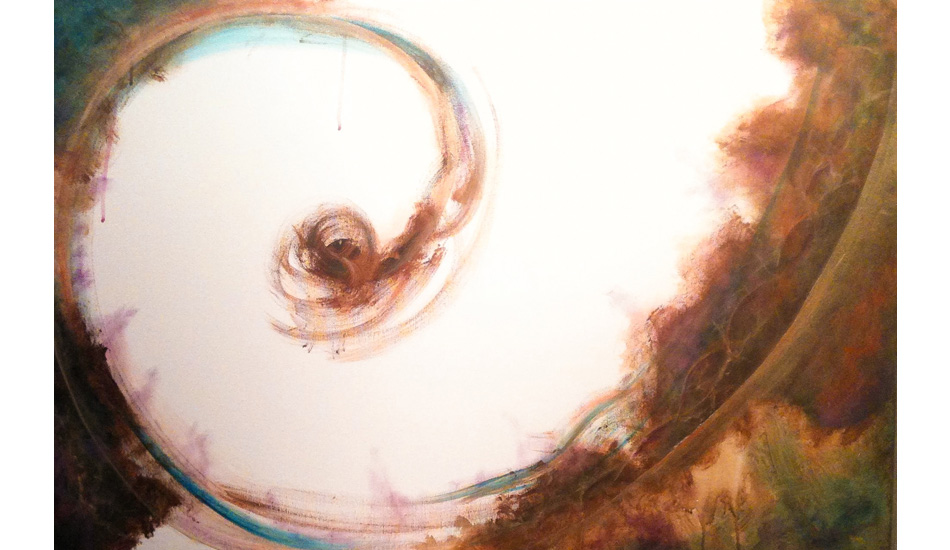 "Eye La View on Higher Ground." 24" x 36". The concept of this painting deals with beginnings and endings. The spiral representing the Fibonacci Sequence of exponential growth. The white area is the void, the possibilities, the empty space, the invisible energies. Quantum physics and the study of our changing DNA. What I like to call "light matter." Here's an example of the process my paintings go through (see next image). 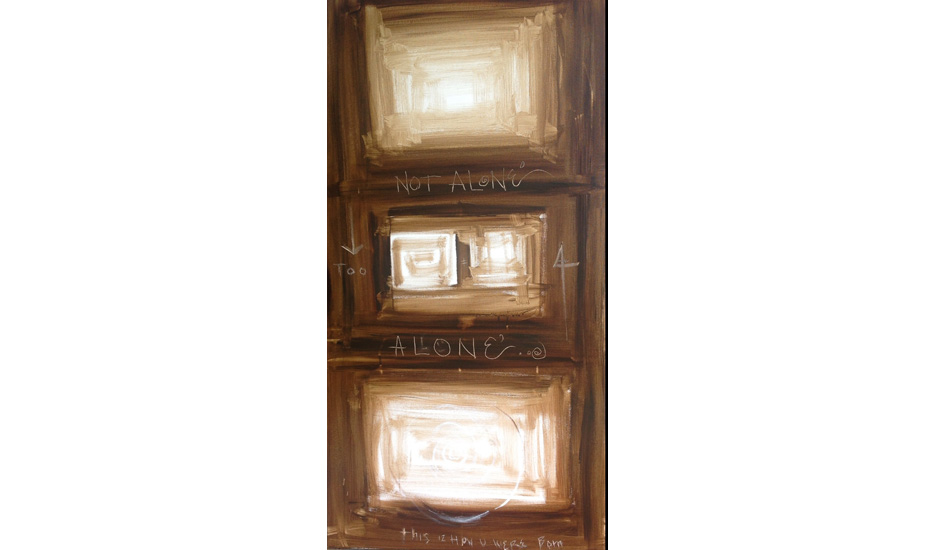 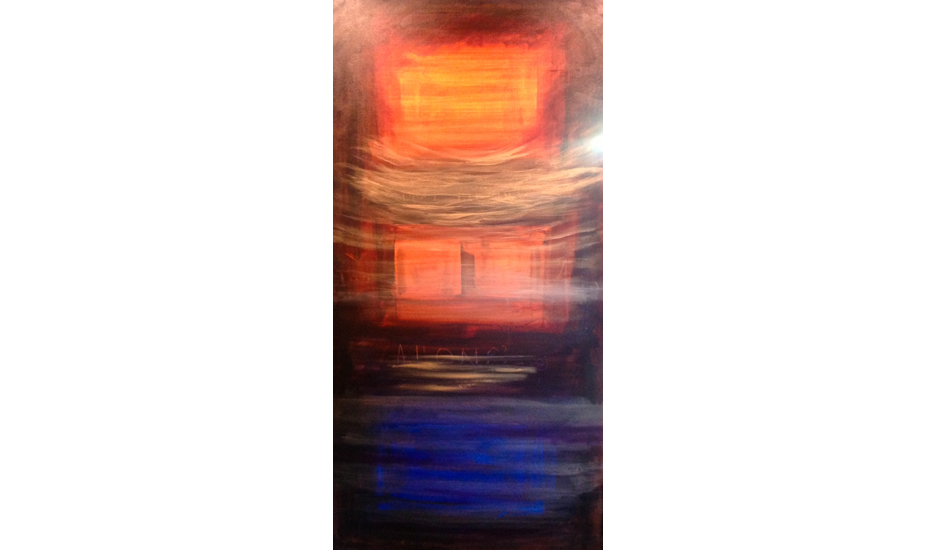 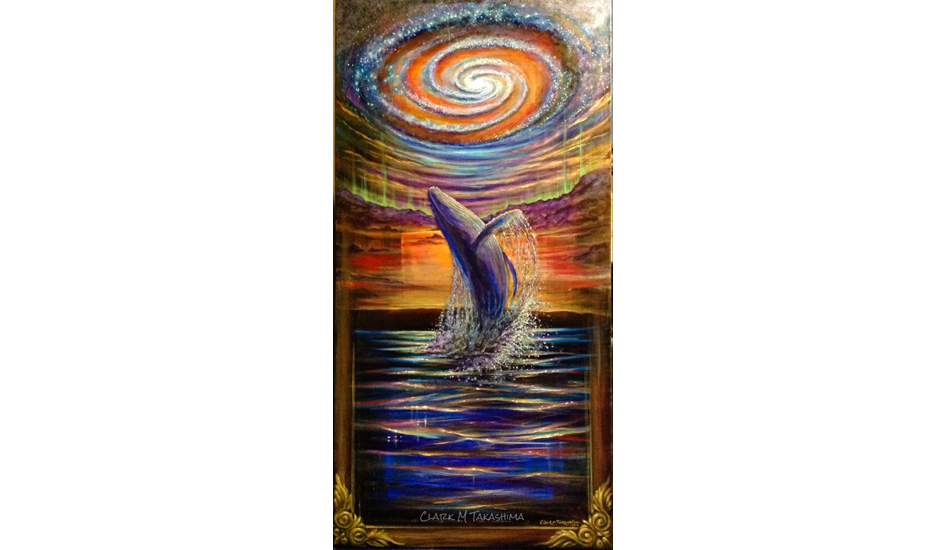 "Not alone, All one." 24" x 48", 2013. As with all the Universal Soul Series paintings, the theme of bringing the universe to be seen from earth, humpback whales represent the journey from one place to another. This is the final gloss. 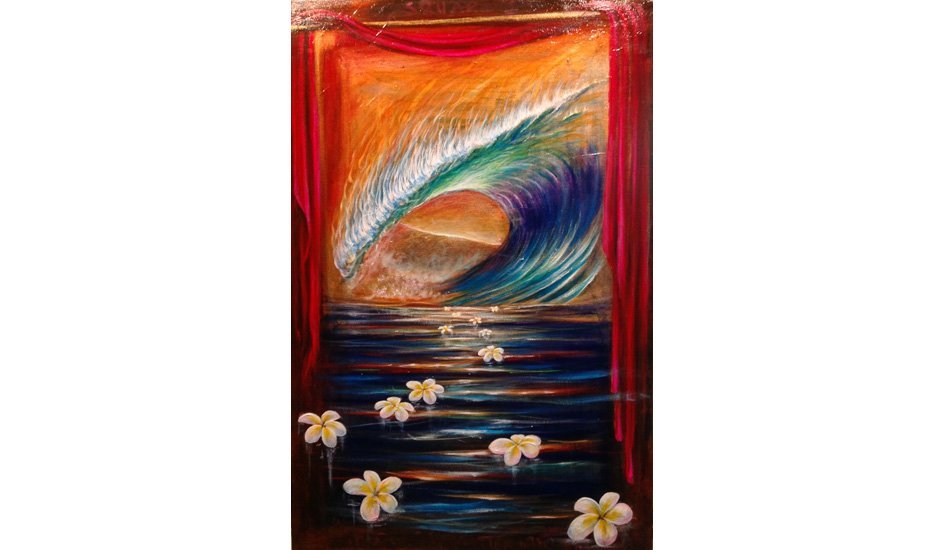 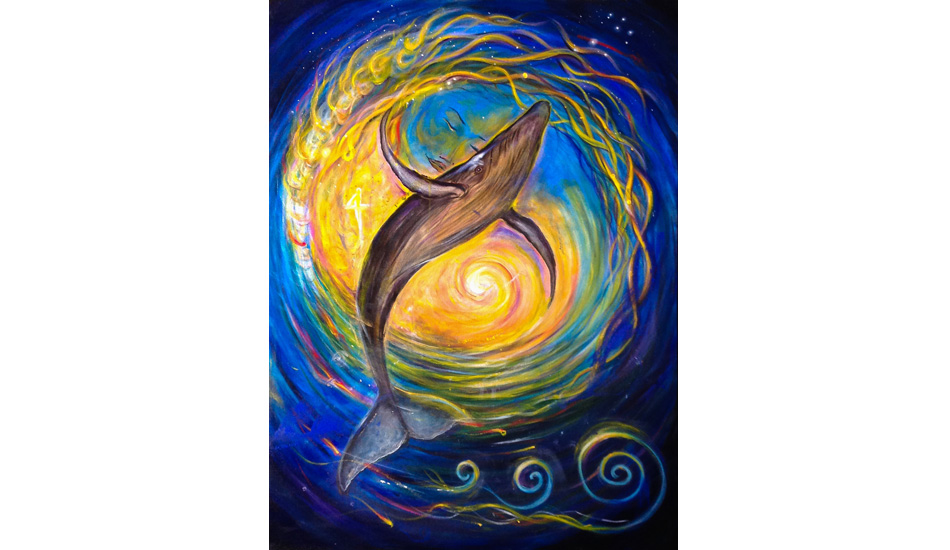 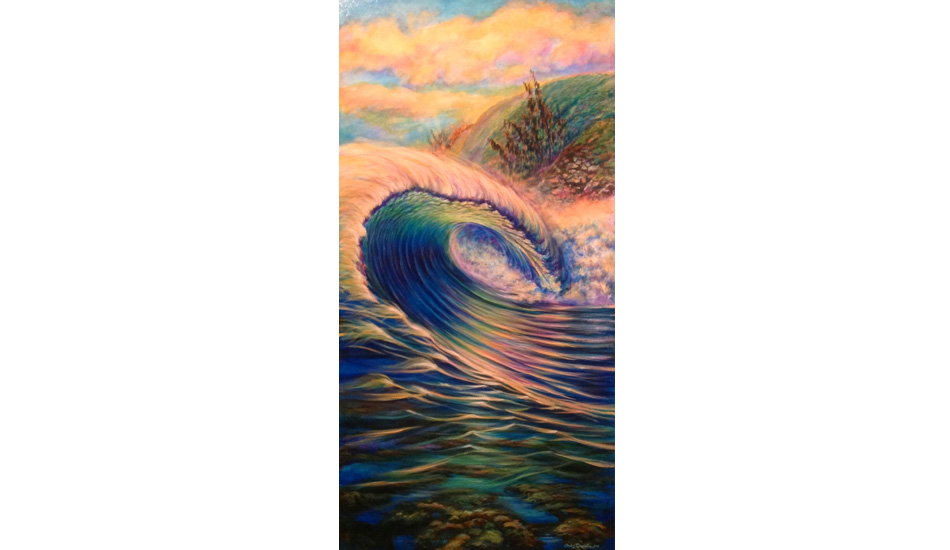 Yesterday, Hawaii’s most beloved surf artist, Clark Takashima, passed away due to a heart attack. I found out late this morning after a morning scope of my Instagram feed led me to Sunny Garcia’s page who dedicated a post to Clark. He was far too young, passionate and bright, and he will be missed by all who knew him and/or his artwork.

Clark was known for both his impressive artwork, based mainly around waves and his surroundings on Hawaii, and his infectiously positive personality. In the short time I knew Clark, he couldn’t have been a more enthusiastic, generous and positive person. He radiated positive vibes and seemed to embody the aloha spirit. This is the way I’ll remember him.

He was more than a great guy. He was a very talented artist, too, originally from Pearl City but lived on the North Shore. When we corresponded, he occasionally gave me a little update on how the waves were by him and always asked, in a most genuine way, “How are you?” That was Clark. Happy to share the stoke. This generosity was also exemplified in his project called “The Plant to Pupukea,” which was established with the support of the 9th Wave Gallery. Clark decided to dedicate himself to help other artists to aspire to their potential. Early in 2011, Clark and fellow artist Patrick Parker joined forces to one day maintain a large, working studio to be a creative hotspot for artists.

He once said of the project, “We open our doors to visiting and local professional artists to paint, discuss the importance of sharing information on marketing, painting techniques and creating the best works possible. We encourage our peers to look deeper into how the Old Masters set up their compositions using information incorporating numbers, geometry, music and the cosmos. Then, hopefully, those visiting will do the same in their communities. The Plant too, on occasion, welcomes amateur artists to paint and enjoy the creative process. I think it’s essential for artists (or any creative person) to surround themselves in a creative environment. The last two years have been amazing and incredibly inspiring with many notable artists, surfers, clients and kids experiencing this energetically charged space.”

Clark is now reunited with his wife and friends Andy Irons, Sion Milosky and Buttons Kaluhiokalani. When his wife passed, he wasn’t in an easy place. He was open about the heartache it left him with and he put that energy into his work. Everything had meaning, and plenty of it was personal.

Instead of mourning the passing of a friend, artist, stranger, or whoever Clark was to you, let’s celebrate the life he lived while he was here. Let’s remember his legacy, his artwork, his generosity and know he’s in a better place even if we may not be.

Clark was also a gracious contributor to The Inertia. Below is some of his artwork.