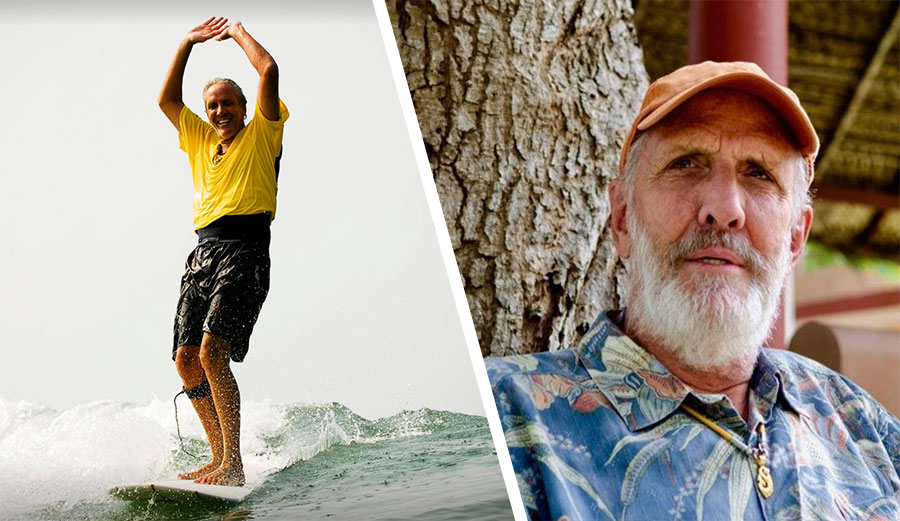 Jack Hebner, the man better known as the Surfing Swami or Swami Narasingha, passed away on January 2, 2020. He was 73.

The Swami was a hugely important man in surfing. To use an overdone quote, to know him was to love him. Swami had an energy in and out of the water that was infectious. In 2018, I had the good fortune of talking with him for a few hours via Skype for a story about the time he got carjacked in Mexico, a place that he loved dearly. It was a wide-ranging conversation that ended up being less about the carjacking and more about his life, and I’m glad it took that turn. I’ve spoken with a lot of very interesting people for stories, but few stand out to me like the Swami. Our conversation stuck with me so much, in fact, that two years later, the audio recording of it is still on my desktop in its own file. Once or twice a month, I’d say, I will click into it and scroll to a random spot. Everything he said in that conversation is worth re-listening to. Everything. He told stories with a kind of reverence for them: they were not just stories, but vessels for some kind of lesson to be learned. His voice then was a bit raspy, and I assumed it was from his battle with cancer, but I couldn’t get up the courage to ask him.

He lived an incredibly interesting life. By his own telling, he was in two shootouts in Chicago in the 1980s. He was shot at in Africa at least a half dozen times. He was in Ethiopia when the war took place, amid hails of bullets. He was captured in the jungle by what he believed to be African militia. He told me these things with a curious sort of detachment. “I just wrote it off as adventure,” he said, a trace of a chuckle in his voice. “Now, it’s like, ‘hey, I don’t need any more of this stuff. I could do with a lawn chair or something.'” He paused then, as though thinking back over his life, and continued. “Well, it’s not quite that bad. But you get the idea.” I did get the idea, and I took it to mean he wasn’t quite done adventuring just yet.

Back in the sixties, Hebner became a Krishna monk and took the name Swami Narasingha. As Hebner, though, he became one of the first members of North Florida’s first surf club in 1963 and is often thought of as a pioneer of East Coast surfing. Afterward, he spent decades in India and would go on to form Sri Narasingha Chaitanya Ashram in Srirangapatna in 1994. He also founded the first surf club in India and was, without a doubt, the most influential surfer in that country. He was instrumental in the establishment of the Surfing Federation of India, the National Governing Body of Surfing in India and in many ways set up India’s template for a surf industry.

Kishore Kumar, who is president of the Surfing Federation of India, met Swami in 1999. “He was keen on developing a surfing destination for the state,” he told The Times of India. “When we reached Mulki, he loved the place and decided to buy land and build an ashram that gradually became Mantra Surf Club.”

When I spoke with the Swami in 2018, he was in Guanajuato, an old silver mining city in central Mexico. He was there receiving treatment for his cancer. He’d ended up there for a strange reason. On his way back to India from a trip to Indonesia, he got the news that he was no longer welcome in India. “We arrived at 11 o’clock at night,” he said, “and there was a guy standing there with my name on a board. I walked up to him and he took me right to immigration, turned me around, and put me on a flight back to Malaysia. I got kicked out of India.” As it turned out, it was a red-tape nightmare. “I got blacklisted,” he continued. “I’d been there for some 40-plus years. They changed a lot of their rules and regulations, and it ends up that I’m there on the wrong kind of visa for all those years.”

But as he got sicker, he wanted to return. “On his wish,” Kishore Kumar, his disciple of over two decades, told The Times of India, “we brought him back to Mysuru and he died 10 days later.”  Swami was placed in samadhi on the ashram premises the next day.

The news of his death was announced publicly on his Facebook page. “We are deeply saddened by His untimely demise, it will take us a long time to come to terms with it,” the post read. “He has left a great void in our lives which will probably never be replaced. His legacy will be honored and continued by all his followers and well-wishers at Mantra Surf Club & Surfing Swami Foundation in the near future.”

The Swami won’t be forgotten. He spent his life making the world better, and his way of doing it was by getting people in the water. He was a man who smiled often and laughed easily. And even though he’s gone now, his presence here for those 73 years was a gift to everyone who knew him.