Rosters Are Set; Who Qualified for the 2023 CT? 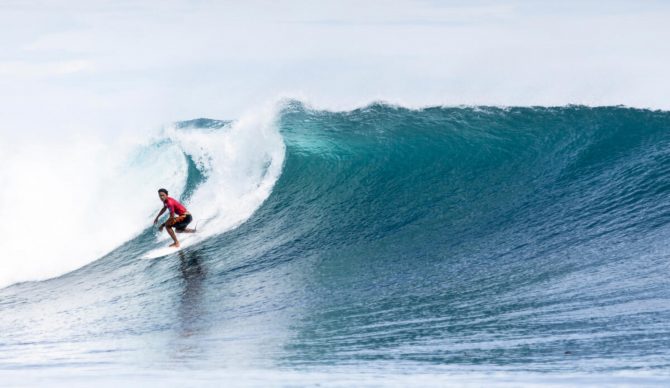 Ten men and five women officially qualified for the 2023 Championship Tour via the 2022 Challenger Series, with results from last week’s Haleiwa Challenger solidifying the Dream Tour roster. Leonardo Fioravanti and Bettylou Sakura-Johnson finished the seven-stop CS calendar at the top of the men’s and women’s rankings, followed by a handful of athletes that had missed the first-ever midseason cut back in May and a mix of soon-to-be CT rookies. Rio Waida and Caity Simmers will arguably be two of the most intriguing newcomers in 2023. Waida is the first Indonesian-born surfer to qualify for the Championship Tour and Simmers, who barely turned 17 in October, qualified for the 2022 CT but declined the opportunity.

“Although it is eventually a goal to be on the CT, I’m declining the spot for 2022,” said Simmers to the WSL at the time. “I’d like to work on my surfing, spending time with my family and friends, and school to be more mentally and physically ready to face that challenge.”

She doubled down on that sentiment this past summer, telling The Inertia’s Joe Carberry in El Salvador, “I just wanted to spend more time with my family.”

Just below Simmers on the Challenger Series rankings was an interesting or heartbreaking scenario, depending on whose shoes you’re in. Sophie McCulloch and Portugal’s Teresa Bonvalot finished the year in a tie for the fifth and final qualifying spot. This, of course, would be (mostly) inconsequential at any other spot on the leaderboard. Molly Picklum and Simmers finished the year in a third-place tie, for example. But with only five women qualifying for the CT, that left McCulloch’s and Bonvalot’s standing to the WSL’s heats-won tiebreaker. McCulloch won 14 throughout the year and Bonvalot topped 10 of her heats in 2022, elevating the Australian into the final spot for CT qualification.

“I want to congratulate Sophie for qualifying,” Bonvalot said after a third-place finish at Haleiwa. “It was not my time. I guess that’s how it is.”

The men’s side features plenty of storylines too, with seven different flags represented among the 10 qualifiers. Plenty of surf fans and surfers alike have been vocal about disliking the CT’s new mid-season cut. Just one year ago, Morgan Cibilic and Conner Coffin were competing for a world title in the first Rip Curl WSL Finals and now both will go into 2023 trying to re-qualify for the tour altogether. That’s a testament to the harsh threshold for staying on the CT. On the flip side, the cut has been used as a tool for creating some equity further down the ladder, turning the old QS circuit into a regional qualifier for the new Challenger Series and allowing those athletes on the verge of qualification a clean slate at a higher level of competition. The men’s World Tour has probably never welcomed athletes from seven different countries in a single season.

Notably among that crowd is Joao Chianca, who will most likely draw a lot of interest in his second year of CT heats. His short 2022 rookie season was its own highlight reel, kicking off with one of the most exciting heats all year at Pipe. At the time, fans didn’t know Chianca would end up one John John Florence-matchup away from the cut line, falling to the two-time champ in the Round of 16 in that contest and in the Round of 32 at Bells. He’ll get another crack at the CT next year though, this time with a little more experience under his belt. The same goes for Fioravanti, Ryan Callinan, and Lau, who also started 2022 on the CT, missed the cut in May, and then grinded out requalification through the Challenger Series.

Here are the full lists of athletes who finished above the 2022 Challenger Series qualification lines: