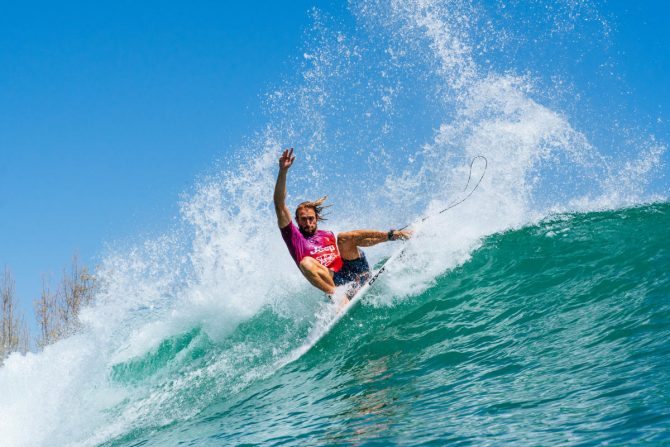 Just read the headline word-for-word and soak in exactly what it’s articulating before you freak out. As you might have heard, the World Surf League’s mid-season cut is upon us where part of the field will be eliminated after Margaret River and sent down to the Challenger Series in order to re-qualify. It’s caused quite a stir on social media.

Now, I’m not saying a valid argument against the WSL’s mid-year cut doesn’t exist. I’m saying in all the social media uproar, the athlete petitions, or gossip of an unlikely boycott — all presented in the eleventh hour to protest an agreed-upon plan that’s been in place for two years — I still haven’t come across convincing criticism of unloading one-third of the World Tour roster halfway through the season.

The top argument I’ve seen floated in protest of using a mid-season CT cutoff to support both the Challenger Series and a regionally-focused QS system is that athletes who’ve worked their whole life to get on Tour “deserve” a full year once they get there. I’m not rooting for anybody to get booted, it’s just really tough to get on board with this mindset.

“If the cut had existed, we wouldn’t have seen Jack win Mexico last year,” you screamed halfway through reading the headline.

“What if a superstar like John John has a slow start to the season and doesn’t qualify for the second half?” you question, thinking you’ve just provided a mic drop rationalization.

To that I say “So what” and “Not likely,” respectively.

Is this really the healthiest standard for competition in any sport — giving athletes a full season in order to prove they can stick around in the middle of the rankings…for another full season (or even a career) of sticking around in the middle of the rankings? If so, then let’s absolutely abolish the mid-year cut. Some lucky sucker is going to get paid designing rad participation trophies for the WSL. It’s worth remembering this is the Championship Tour we’re evaluating. These are the top 35 and top 16 competitive surfers on the planet, whittled down to just one when the dust settles. Every single athlete who’s worked for a place on that short list has at one point dreamt of being World #1. And in the profound words of Ricky Bobby, “If you ain’t first, you’re last.”

This, of course, is all a matter of perspective. We don’t need to feel sorry for professional athletes who compete and come up short. In fact, most gold medalists, world champions, MVPs, and GOATs will tell you their failures were the very thing that propelled them to greatness. Jordan was famously cut from his varsity high school basketball team. Tom Brady has seven Super Bowl rings but has never let go of the fact that six quarterbacks and 192 other people were selected before him in the NFL’s 2000 draft. I could pull out story after story to build on the idea, but the fact remains that we celebrate people who overcome adversity. It’s typically the most compelling thing about sports. Mediocrity is not.

But like I said, many of these points come from perspective. The harsh truth is that the CT has a rotation of athletes perpetually fighting for re-qualification by the end of each season. In fact, they’ve usually settled into those circumstances by the midway point anyway with the exception of a few people whose rankings are saved by those one-off wins and big results. Looking at the past four to five seasons of the men’s side of the equation shows that drawing a line at #22 in the rankings just halfway through the season isn’t as hair-brained as angry surf fans are suggesting. And it’s certainly not unfair.

Since 2016, only two men who finished a season in the Top 10 were ranked lower than #22 after five contests: Kelly Slater in 2016 and 2019 and Kanoa Igarashi in 2018. Slater went on to win Tahiti that year and Kanoa hasn’t slipped out of the Top 10 at any point since arriving there later that season. It’s a pretty solid streak. If you think this is support for the Jack Robinson argument, it’s really not. There’s a strong point to be made that one-off, occasional wins like Slater’s and Robinson’s can just as easily be an indictment against their roster spots rather than support of them. They’re outliers that aren’t indicative of a surfer who’s consistently excelling.

Meanwhile, surfers who finish in the Top 5 don’t need time to build steam, and their rankings charts aren’t filled with poor results offset by big wins. A Top 5 season usually has Round of 16 losses as throwaway scores, and the athletes who finish in contention for a title are historically in that range throughout the season. But the athletes who fly out of nowhere to win a contest here and a contest there tend to settle back into their respective spots, singular big wins offset by losing in the Round of 32 and Round of 16. In fact, if surf fans can actually muster up the courage to be objective about Slater…he’s in the ballpark of a statistical coin flip when it comes to getting past the Round of 16 since that win in Tahiti.

At the end of last season, Matt McGillivray was the only surfer who finished below that #22 cutoff (ranked 24th) with a single finish above equal 9th (a Round of 16 loss). Sebastian Zietz and Michael Rodrigues were the only two to do so in 2019. Four surfers did this in 2018. But when you combine all of those results over three seasons, none of them won an event. And in 2017, no surfer in the end-of-season Top 10 ever dropped below world #16 at any point. If anything, the numbers show that the middle of a given World Tour schedule is actually ample time to learn if a surfer is in contention for a World Title or is headed for that hamster wheel of trying to re-qualify for the next season anyway.

The 2019 rankings chart. The cream don’t really rise to the top, they just get there and stay there.

“But now they have to fall off the tour to re-qualify,” you’ve prepared yourself with. “That’s not fair.”

The introduction of the Challenger Series might actually be the most fair factor in this whole restructuring. For rising QS surfers the CS creates opportunities to focus on regional competition, which then leads to qualifying for the Challenger Series. There, they’re met with a mix of more experienced competitors and doing it all in quality waves (ignoring Huntington Beach here, but, you know…). The CS schedule is loaded with places like Haleiwa, Hossegor, Ericeira, and others that are all occasional CT venues, not Pismo Beach. It’s not crazy to think CT rookies in the near future will be better prepared for their leap to the “Dream Tour.” And those same young competitors have been given a more equitable — but still not easy — path to get there. There’s no more scrambling to compete in QS 1,000 or 3,000 events in Chile, where healthy sponsor support (read: $$), or going into personal debt, are the most likely options to make it all possible.

Did the current surfers on the CT  qualify this crazy way? Yes. Does that mean professional surfing needs to stick with a broken, uneven, mediocre system just to avoid hurting their feelings? Definitely not. Especially when numbers show five contests or 11 contests don’t really do much to change their fate. And the new alternative of relegation and re-qualifying against a Challenger Series field is objectively less brutal than early heat draws against Italo, Filipe, John John, and co. — the same field whose sights are set on World Titles, not re-qualification. Restructuring has simply filtered athletes into their respective games in a given season: the one where a large pool of surfers are fighting for a spot on the Dream Tour and the one where a small group of surfers fights to win the whole thing. After all, winning is what we’re told they signed up for.