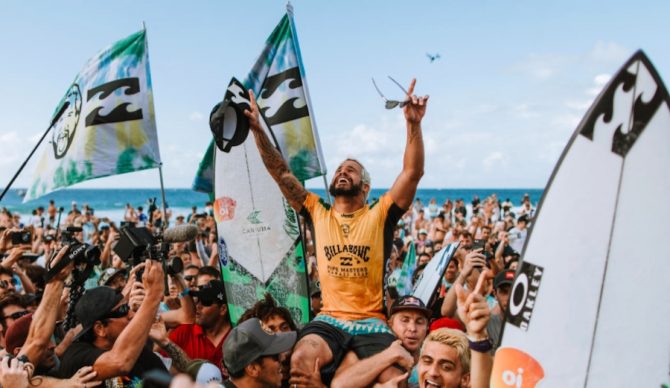 Italo at Pipe, winning his first title. Winning a title here is something we may not see again. Photo: Ed Sloane/WSL

The year 2020 has been a real doozy. It might be the most societal-altering in at least a century. Social change has rightly become top of mind. And of course, a global pandemic has gripped the planet for the last six months, tearing at the landscape of both industry and sport. In fact, every major athletic league in the world has been forced into massive changes in schedule and policy to adapt to the Coronavirus era. Hockey, soccer, basketball, and golf have revised schedules completely, while college football and the NFL are still on the brink of possible cancelations. Which brings us to our World Surf League. The WSL hasn’t run a single Championship Tour event in 2020 and according to WSL CEO Erik Logan, 2020 has officially been called off. The year will pass without crowning a world champion. Let that sink in for a minute.

Along with making official what most of us considered a possibility, the League also unveiled major changes that – make no mistake – will forever change the face of professional surfing.

With no events other than several exhibitions in the works, the 2020-2021 season will officially kick off in November on Maui for the women and December on the North Shore for the men. Honolua and Pipeline have now become the start of the professional surfing seasons (as of press time, the WSL was still undecided on the Triple Crown, telling us it could become a specialty event).

The world has changed. And surfing has too. Let’s dive into the WSL’s massive shift that we’re still unraveling.

The WSL Schedule has certainly been altered – with two significant additions – but mostly, it’s been adjusted to ensure that each event sits in the proper seasonal window. For example, WSL officials told us that events like the MEO Rip Curl Pro Portugal was moved to a winter timeframe from the summer/fall to better capture powerful Atlantic swells and showcase Peniche’s Supertubos in all its glory.

The WSL also announced that it will bring G-Land back to the pro tour for the first time in years, highlighting one of the greatest left-hand point breaks in the world. Instead of going with the relatively safe bet of Bali’s pristine coastline and easy access to cities, the WSL is taking a leap with the logistically-complicated G-Land on East Java, with the tradeoff being another scorching left-hand barrel on tour, much to the delight of goofy-footers everywhere (read more about that, here).

With fans clamoring to have Lower Trestles back, they may (or may not) have gotten what they wanted. Obviously inspired by Gabriel Medina’s and Italo Ferreira’s final heat drama in 2019, the WSL created its own Super Bowl to ensure champions are crowned in the final heat of the year (instead of in locker rooms or on contest overlooks). The WSL’s version of a Super Bowl, “The WSL Finals,” will take place in early September, and we’re told it will most likely be hosted somewhere in continental North America. While we can’t absolutely confirm it, that logically only leaves a handful of potential venues, with the natural wave machine of Lower Trestles as the most likely venue. 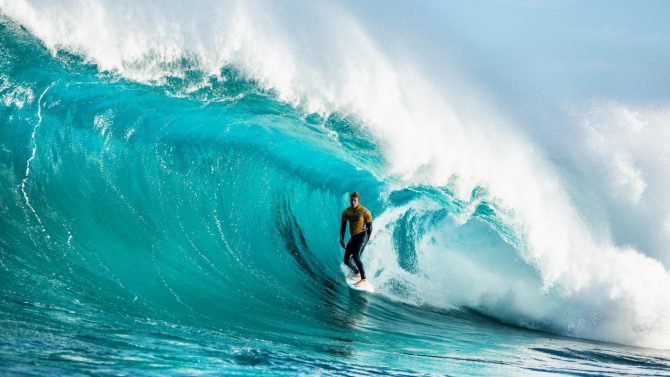 Aside from The WSL Final format (more on that, below) the mid-season cutdown will be the biggest change for the WSL. Starting in 2022, the men’s and women’s fields will be sliced in half with the men going from 36 to 18 and the women from 24 to 12. The League tells us the timing of the cutdown hasn’t been “explicitly outlined yet and will depend on the 2022 schedule” but would probably be sometime around the midpoint, which would be Brazil. More details about the cut will be released closer to the start of 2022.

Logan called this the “right thing to do for the sport.” He was talking about a number of fronts. First, in theory, this creates a power-packed back half of the year and more interesting matchups where surfers like John John Florence and Gabriel Medina or Steph Gilmore and Carissa Moore could meet more often during events (assuming the superstars qualify for the back half of the season). As of now, those high-profile matchups just aren’t happening with enough frequency.

Second, it creates less drag for the middle part of the WSL’s calendar year, instituting a playoff-like atmosphere mid-way through. The tension will create big storylines for an often routine-like part of the schedule that can get overlooked. Last, it adds more legitimacy to Brazil, where the cuts will most likely occur (and, no bombshell here, due to time zones and venues many non-Brazilian fans tend to tune out that contest).

This schedule change also allows athletes to re-qualify during the same calendar year using Qualifying and Challenger Series events so they don’t have to sit out of the CT for an entire season to get back on.

The main problem here is the gamble: what if a Carissa Moore or an Italo Ferreira or a John John Florence has a horrible start to the season and doesn’t make the cut? Worse yet, what if several of those high profile surfers miss out? That had to be a worst-case scenario situation in the League’s decision-making process and does leave the WSL somewhat exposed because let’s face it: without high-profile stars, there are fewer mainstream news hits, which equals fewer eyes on the product.

There’s a lot to unpack in this seismic altering of professional surfing, and the announcement alone will keep pundits loading content for days. Not the least of which is the new WSL Final, slated for somewhere in North America in September.

It was easy to see that the WSL needed this. The League wants to eliminate the crowning of champions in mobile locker rooms or in parking lots above Honolua Bay. They want to control the narrative, from both a competitive and commercial standpoint. Imagine how much easier that final event will be to sell to partners.

The League will take the top five men and women into the final day following the 10-event season, creating a compact championship showcase. The title event is a series of man-on-man heats with the World Number 1 waiting with a guaranteed spot in the world championship final. The remaining four battle for the chance to compete in that final. The 5th ranked competitor must beat numbers 4, 3, 2, and 1 to win (with the final match being best two out of three). It’s like a buy into the last heat of the year, which can be an advantage or disadvantage depending on your opinion regarding momentum in sports – meaning the Number 5 could get hot in the early rounds and continue that streak all the way to the final as the Number 1 sits and waits without getting in the water.

The other notable disadvantage that we talked about earlier is the undesirable scenario where the stars don’t make the final event. But this is part of the madness that will make up the new Super Bowl, er WSL Final, era. “Surfing has not evolved as it needed to,” Logan and the WSL’s Dave Prodan told us. “Audiences have. The sport has not. This change will be an evolution, not a revolution.”