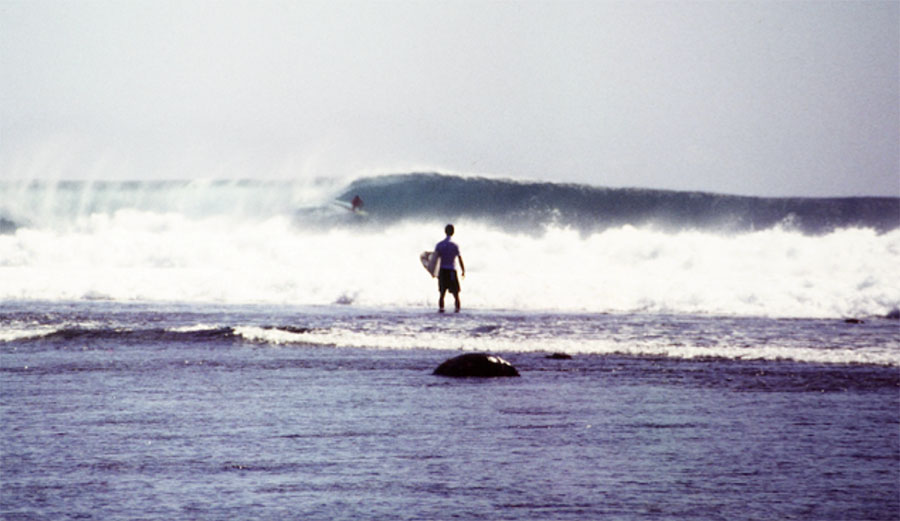 The Quiksilver Pro G-Land set the stage for what would morph into the “Dream Tour.” Photo: WSL/Eric Diamond

You may or may not have heard by now (you would be forgiven if you fall in the latter camp, as it was only announced this morning), that the World Surf League has officially pulled the plug on the 2020 season. But with that announcement, they also released the new schedule, and on it was a reminder that G-Land is finally back. And G-Land is, without a doubt, one of the most interesting places in all of surf history. “No other event,” Kelly Slater told me via DM, “has changed the vision of the tour so much.”

The powers-that-be at competitive surfing’s governing body unveiled some very big changes to the tour schedule. Although many of the stops are the same, the new schedule is a revamp of how the game is played. Think Superbowl. Think play-offs. The 2021 tour starts in Hawaii, which is bound to upset a few people, and it ends somewhat mysteriously with a TBD. Rumor has it that the “The WSL Finals,” as they’re calling it, will be somewhere in North America, and the window — September 8 – 16, 2021 — makes Lower Trestles a likely option. Make of that what you will, but unless “TBD” means a Search-style event with a roving contest license, that’s not the most interesting part. The most interesting part is that G-Land is back. That’s right. Fuckin’ Grajagan, that picture-perfect left that dances on the reef at the southeast tip of Java, Indonesia. It is, as Matt Warshaw describes it, “one of the world’s longest and most challenging reef breaks.”

Now, I understand that Pipeline is a magical spot that positively boils with surf history. It could be said (and has been, ad nauseam) that Pipeline is surfing’s Holy Grail. But hell, Mr. Pipeline himself, Gerry Lopez, once noted that he preferred G-Land to Pipeline. “It was our surfing monastery,” he said. As I mentioned, G-Land’s story is, quite possibly, the most interesting in all of surfing. Before I go any further, here’s the new schedule in its entirety. Then we’ll get into the best cut of meat on this fat cow: The story of G-Land.

Just so we’re on the same page, G-Land’s inclusion onto the Tour schedule isn’t a new thing, exactly. It was last year that the World Surf League announced it was back after a 22-season hiatus. The announcement was met with nearly unequivocal cheers, a rare occurrence among discerning surf fans.

The inaugural Quiksilver Grajagan Pro sounded the horn in 1995, and my God, the waves were absolutely perfect. For an entire week, four- to eight-foot surf pounded the reef. Kelly Slater won. It ran for two more years, then was slashed from the schedule due to a host of social and political issues that are far too complicated to get into here. But that event, as short as it was, changed competitive surfing forever, much like G-Land’s discovery changed surfing forever.

“G-Land made the world tour an adventure and started the ‘Dream Tour’ as it were,” Slater said. “The excitement of going there for the first time for an event in the middle of nowhere with all that history of surfers past like Gerry and crew made it that much more exciting.”

That first event was a little more than two decades after G-Land was first actually surfed, but, despite the years, it was still a wild place where wild things happened. “None of us knew what we were getting into and figuring the wave out as we went was an amazing part of the process,” Slater continued. “Someone found a floating skull on the shoreline, Kalani Robb got Malaria, I touched a green mamba in a tree, rats were stealing all of our snacks and dragging them to the sides of our huts. It was adventure and competition all wrapped up into one.”

According to Warshaw’s Encyclopedia of Surfing, Grajagan was first surfed in 1972. It was nearing the end of the Vietnam War, just two years before those NVA tanks rolled through the gate of Saigon’s Presidential Palace. The world was a strange place at the time, and Indonesia looked nothing like it does today. It was then, during that era of great upheaval, 23 years prior to Kelly Slater’s win, that Bob Laverty and Bill Boyum, two American surfers caught G-Land’s now-famous waves.

Boyum, born in 1951 in Philadelphia, was the son of a Navy pilot from Maui. In 1969, not yet 20 years old, Boyum flew to Bali to meet his brother, Mike. There, Bill and Mike met Bob Laverty, a surfer from California. They surfed Uluwatu in its glory days, well before the crowds and plastic infiltrated the lineup.  A few years later, on a flight from Jakarta to Bali, Laverty looked out the window and saw his paradise. A perfect, empty left peeled its way across the reef, feathering gently in a slight offshore breeze far below. It was somewhere on the edge of the Plengkung National Forest, near the tiny fishing village of Grajagan, and Laverty burned the area into his memory. A few months later, that aerial view still scorched into his brain, Laverty and Bill Boyum packed their bags with a few necessities, climbed onto motorcycles, and went off in search of that surfers’ Shangri-La. They took a ferry across the bay from Grajagan, then set up a camp on the beach that was shaded by the vast jungle behind them. In front of them, the yet-to-be-named G-Land pumped out waves of nearly un-rivaled perfection. For three straight days, the luckiest pair on earth surfed with only each other for company.

G-Land is made up of three sections: From farthest to closest to shore, they’re Kong’s, Moneytrees, and Speed Reef. Kong’s, while sometimes offering the longest waves, is unpredictable and extraordinarily hard to read. Moneytrees is likely the section you’ve seen the most — it’s relatively reliable and barrels often. Speed Reef, like many inside sections, is probably the most difficult to surf, but arguably offers the longest barrels.

A few days after that three-day trip, Laverty perished in a surfing accident at Uluwatu. If there is a saving grace surrounding his death, it’s that he got to surf perfect G-Land with only a good friend just a few days before it happened. Before long, that possibility simply wouldn’t exist. Mike Boyum, who would join his brother Bill on a few later trips to Grajagan, opened up the G-Land Surf Camp in 1974. Gerry Lopez would be one of the first to arrive on the scene and one of the most frequent visitors in his early explorations of Indonesian surf.

Over the mid-to-late seventies, G-Land occasionally showed up in the grainy, acid-dipped surf films of the day. It wasn’t named, though, and it remained mostly a mystery to the wider surfing world. Then, in 1981, Surfing magazine listed it as one of the ten best waves in the world, and the Gold Rush began. By the mid-eighties, Mike Boyum’s little surf camp, according to the Encyclopedia of Surfing, was pulling in a quarter of a million dollars a year. But good times, as they say, don’t last forever.

As an aside to the G-Land story, Mike, in a fairly common move among surfers in 1970s Indonesia, started trafficking drugs. He was caught but pulled up roots and headed to the Mentawais before he was finally arrested. After he was convicted on drug charges, he spent a year on a work-furlough sentence and was arrested again on the same charges, spending four years in prison. Following another iconic surf discovery, Cloud Nine, Mike Boyum died in the Philippines on June 14, 1989, 43 days into a fast. He is buried at a spot that looks over the break, but his part in the discovery of G-Land and his surf camp made an indelible mark on what surfing was to become.

Bill Boyum recounted his incredible explorations of Bali and surfing Uluwatu before pretty much anyone else for The Inertia in 2015.

Although the World Surf League certainly has taken its fair share of flak for previous changes to the tour schedule, the re-addition of G-Land is a throwback to surfing’s halcyon days, a nod to those select few places that pushed it down the road to where it is today, and a damn fine spot to hold a world tour event.

Learn more about the WSL’s updates to the 2021 Dream Tour here.