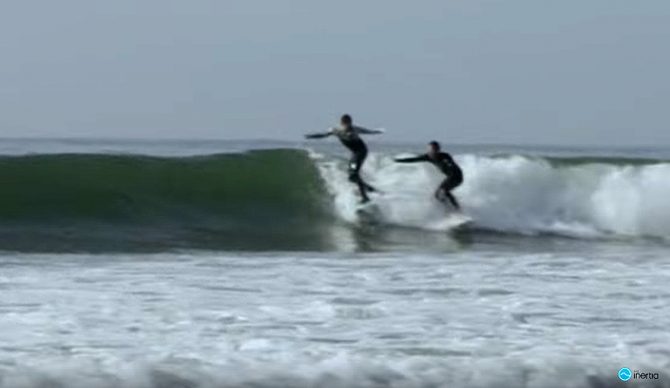 The wave in question.

It all started with a “Hey sorry, bro. I didn’t think you were going on that one.” Technically, it had started only a few moments before. 22-year-old Loyola Marymount student Joseph “Broseph” Wilkins was enjoying a morning surf at the popular Los Angeles beach, El Porto. The indepth expert forecast had called for 2-4 ft + waves in the fair to good range, bringing out hordes of surfers and their Wavestorms from far and near. The crowd was thick and tensions were high. A set wave rolled through aimed straight at Wilkins, who paddled his new soft top Beater shortboard into position. Little did Wilkins know, self-proclaimed El Porto local Bernie Pittman was behind him.

“What the FUCK, bro?!?!” screamed Pittman. “Bro you need to look, you KOOK. Go back to fucking Playa, asshole.”

What ensued was a barrage of “bros” in the following verbal tussle. “Bro?? Who you calling bro, bro?”

“Bro, I surf here every day and I’ve never seen you here before, bro!”

“Bro, respect the locals! I’ve been living here since last fall, bro” and “What’s your problem, bro? It’s everybody’s ocean,” were all just a handful of the bro-infused remarks overheard by other surfers during the 4 minute spat.

While neither Pittman nor Wilkins took up the other’s countless offers to “Take it to the beach, bro,” the relevance of the exchange lies in how many times the two surfers used the three letter word.

“Surfing’s previous record for bro bombs in any verbal lineup scuffle was 34 bros in three and a half minutes,” says Frederick Montoya, a spokesperson for the Guinness Book of World Records. “This recent El Porto rouse featured the word bro an astonishing 58 times in four minutes. This is a record we may never see broken in surfing. Those are MTV’s Jersey Shore Season 2-like numbers.”

I was like, “Don’t bro me if you don’t know me,” Pittman later told a local newspaper, still visibly worked up. “And then he was all ‘Bro, who even are you?’ and I was like ‘Bro, I’ve lived in Hermosa Beach since I graduated college last year. I’m a local bro. That’s who I am.’”

Some witnesses say Pittman’s claim that he was wrongfully burned is void, as he had just paddled to the front of the lineup only minutes after taking another wave. But Pittman contests his local South Bay status grants him the right to “fuck this dude up, bro” after noticing the collision had dinged his board. Wilkins, on the other hand, argues that his miniature neon soft top couldn’t possibly have caused the alleged damage.

“I’ve been surfing for four months now,” Wilkins told us. “Everybody says to get a soft top so I bought that Beater as my first board specifically because I didn’t want to look like one of those real kooks on a longboard soft top from Costco. I’m an athlete. I played quarterback in my fraternity’s intramural football team, and surfing’s all balance and core strength anyway so I’ll obviously be on a normal shortboard in like two more months. It’s just lame that these locals can be so mean. Here I am looking all legit on my shortboard, and I call him ‘bro’ thinking he’d know I’m not a kook. Then dude just loses his shit anyway. I mean, what the hell, bro?”

While the debate over who was in the wrong still has the South Bay in a frenzy, both surfers are already ingrained in surf history thanks to the new record. Guinness’s Montoya is firm in the idea that this will be a longstanding record, and was a result of the “perfect storm” of circumstances. “The fact that it took this long for us to get 58 bros in four minutes at El Porto is fascinating, actually,” later adding that the event is unlikely to happen anywhere else on such a grand level. “In a place like Santa Cruz, which is just up the coast, the chatter tends to escalate to actual fisticuffs pretty quick. In nearby Orange County the lineups are usually so crowded that you can’t even tell who’s burned you once you come back up to the surface. The offender disappears like a ghost. And in Santa Barbara County everybody only wears black fullsuits and surfs solid white boards. So you actually can’t tell who is who.”

When asked if this sort of exchange was possible in Hawaii, Montoya added another valuable insight. “That’s interesting. The North Shore is certainly a hotbed of aggression and entitlement in the lineup, especially during what’s known as the haole migration of the winter months. But by definition the record will never be broken there. They say ‘brah’ and not ‘bro.’”