I got a call from my good buds Davee Lee and Marc Wierenga at Signal Snowboards a few months ago — they said we have a project that would be right up my alley. It was something about a packaging company that want a cardboard core surfboard. It sounded interesting. A while ago I made a surfboard-snowboard for them that went over really well on their Every Third Thursday series. It was a really fun and challenging project, and with that in mind, I was totally in for this challenge.

We met up at the packaging company in Los Angeles. It was possibly the largest building I’ve ever been in. I think it took about 20 minutes to walk through to get to the design center.

Seemed like there was maybe 15 people in the meeting. One of them was Mike Martinez, the creative guy at Ernest Packaging, who would be working with me to make it happen. We talked about the options they could get me and what I thought would work best. They had a few different ideas about what would work, but my vision was a honeycomb core that I could somehow shape. Mike was super supportive — they all were — and they got me the cores I was wanting.

I had sent Mike a computer file of the rocker I needed in the core and the stiffness that would be required to actually shape the cardboard. The first cores had the rocker but were way to floppy to shape. It was full on alligator wrestling, flopping around on the rack, refusing to hold still — a real nightmare. I got Mike to add three cardboard stringers: one down the center and two offset. This worked much better. 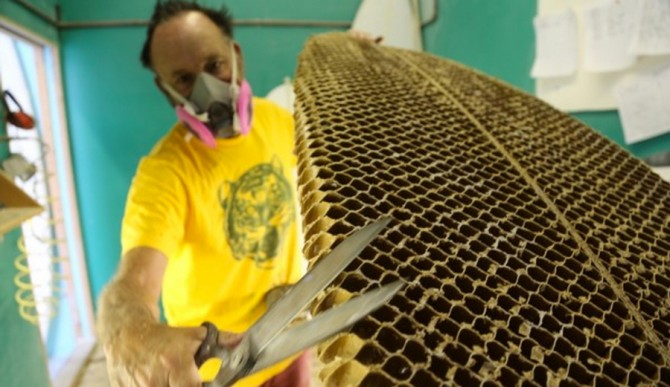 Mike had this liquid stuff he called poly that we sprayed on the core to make it stiff. The more coats the better it got, but it dried slow and was time consuming. It finally dried and was stiff enough to put on my DSD cutting machine to pre shape into the Deadly Flying Turtle model I felt would be a good, easy-to-ride shape that would work for a large variety of surfers. Cutting it wasn’t easy. While it was pretty stiff vertically it was still too loose side to side. During cutting I had to physically hold it straight as the cutting tool went back and forth — more alligator wrestling.  After about four or five cuts with various degrees of success, I got a core that almost looked like the Deadly Flying Turtle.

Next step was to shape the core into the surfboard we wanted. This was not easy  I think I used every tool I’ve ever used to shape something, and even employed a pair of scissors to finish it off. I wasn’t happy with the rails because there just wasn’t enough firm material to get a decent rail shape. I had nothing to go off other than my decades of shaping experience on what to do next and how to do it, but it was mostly there. The process was so much trial and error, with mostly error, to get what we needed. To get the rails to have the necessary form we glued strips of cardboard vertically on the rails. This ended up working out well. In the end, the shape worked out.

The glassing process was the next challenge. Marc had a couple of ideas on the glassing that ended up working out really good. The final product was ridden by a bunch of good surfers and everyone seemed happy. 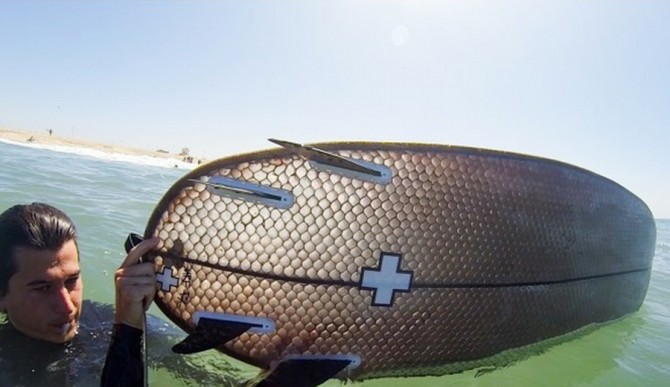 I learned so much doing this and feel that the cardboard core could be a viable option to build strong, durable, high performance surfboards in the future. 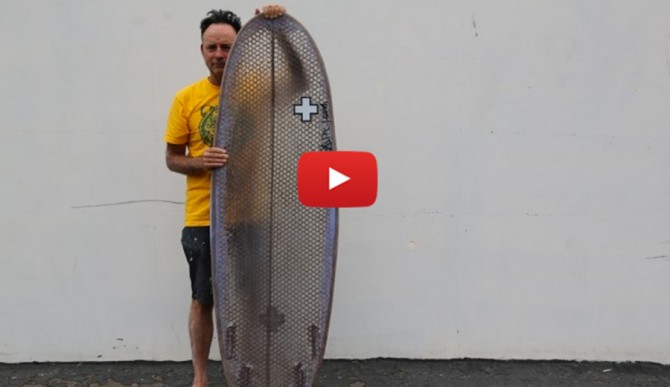 For more Every Third Thursday, visit SignalSnowboards.com. And check out what all Doc is up to at SurfPrescriptions.com.