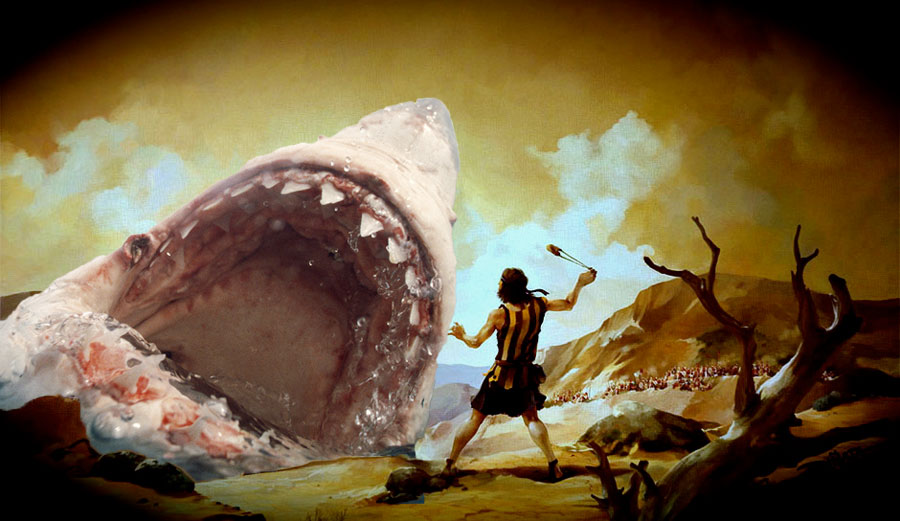 Ok, so the sharks are probably actually David, but you get the idea.

Shark attacks are one of the scariest things that can happen to anyone. If you surf (or spend any time in the ocean), you’ve likely at least thought about it. The last few years have been bad ones for attacks–whether there’s an actual increase in attacks or just the reporting of attacks seems to depend on where you’re getting your information from. That’s because different organizations have different definintions of “attack.” So just to make things easier, let’s use the International Shark Attack File, which is pretty much recognized as the go-to for shark attack figures. Their definition of a shark attack goes like this:  “‘Unprovoked attacks’ are defined as incidents where an attack on a live human occurs in the shark’s natural habitat with no human provocation of the shark.”

2015 had the highest number of attacks since 2000. Last year, there were 98 attacks, while in 2000, there were 88. Interestingly, the number of deaths was more than double in 2000, but that’s neither here nor there. Of course, despite popular opinion, the number of shark attacks has nothing to do with the population of sharks–which is dwindling–but probably has more to do with the amount of people in the ocean. “The numerical growth in human-shark interactions does not necessarily mean there is an increase in the rate of shark attacks,” read ISAF. “Rather, it most likely is a function of the growing human population.  The actual rate of attack likely is declining owing to the ever-increasing amount of time spent in the sea by humans.”

Although for surfers, Western Australia and South Africa are generally thought of as the most likely place to be attacked, North America is, in fact, at the top of the list, and Florida played host to more than half of those attacks. A few years ago, at the height of the Australia’s culling debate, I wrote something called Why Culling Sharks is a Dumb Idea. In short, I went through a shit load of stats through a shit load of years in a whole bunch of different countries. And, as you might’ve guessed from the title, culling doesn’t work, which is something that most experts agree on–even Colin Barnett, who is Australia’s culling champion. “The policy did not prove effective in catching great whites and the great white shark was principally the problem,” Premier Colin Barnett said on Thursday of the baited drum lines. Despite that, a few days ago, after Ben Gerring’s attack and subsequent death, WA officials put out a baited drum line, caught a giant shark, and killed it. Although the Department of Fisheries wasn’t sure whether the shark caught was actually the one that attacked Gerring, Barnett is reasonably sure it was. “It is highly probable,” he said. “It was a four-meter shark found in the exact same location the following day, within 24 hours so I think it is highly likely it was the shark.”

Then, just a few days later, another giant shark attacked and killed a diver in the same area. Without taking away from those tragedies, it proves that the eye-for-an-eye mentality does nothing but allay the fears of some ocean-goers. Which, I suspect, is exactly what most of the manufacturers of so-called “shark deterrent devices” are doing. Take SharkBanz, for instance. Essentially, it’s a magnet in a rubber band. Although sharks are indeed sensitive to magnets, in my very unscientific opinion, there is no fucking way that wearing a dime-sized magnet on your wrist is going to keep a great white from biting you. That’s not to say that the people selling these devices don’t believe they work, but a fool and his money are soon parted, as the saying goes, and the road to hell is paved with good intentions, as the other one goes. There are a variety of shark deterrents out there, including magnetic, electrical, acoustic, and (this is for real) a spray. So let’s take a look at a few of these devices that may or may not work.

Shark Shield claims to be the “world’s only scientifically proven and independently tested electrical shark deterrent.” For a while now, we’ve known that sharks are sensitive to low frequency electrical fields. Shark Shield “consists of two electrodes which, when both are submerged, emit a three-dimensional electronic field that surrounds the user. When a shark comes within a few meters of the Shark Shield, the strong electronic pulses emitted by the device cause the shark to experience muscle spasms.” And most of the testing actually proves it. Of course, nothing will ever be 100% effective, but Shark Shield has a pretty damn good track record. It’s like a little taser for a shark. Shark Shield has a battery in a tail pad kicker that is attached to thin wires that run along the bottom of the board.

NoShark is another device that is a shocks sharks. It “works by emitting a high voltage proprietary signal” that affects the gel in the shark’s nose. That gel is some weird stuff, too. Known as the ampullae of Lorenzini, it creates little electrical currents that depend on the water temperature. Those currents turn on nerve cells that eventually lead it to prey-rich water. NoShark sells a leash with their device on it. For $450, that thing better not ever break.

SharkBanz has been making the rounds lately. It’s a magnet. That’s it. “Magnetic waves coming from the band disrupt its electro-receptors and it quickly turns away,” reads the website, where you can buy a magnet on a cheap leash for $180. At least, though, they’re honest about it: “[There is] no 100% guarantee that interactions will not take place. This technology has been tested extensively on over ten of the most common predatory shark species (not effective on Great Hammerhead) such as Bull and Blacktip, which are responsible for the majority of “hit and run” attacks, and Sharkbanz are an excellent defense against these types of attacks. Great Whites are unique in that they are the only shark that acts as an ambush predator, attacking from a long distance at high speed. There is no effective way to prevent this type of ambush attack. However, Great Whites rely heavily on their electromagnetic sense when swimming in open water, and Sharkbanz could effectively deter an investigating Great White.” Isn’t “could” a great word? I “could” become the next President of the United States… but it’s not likely.

Shark Shocker, despite the name, doesn’t shock sharks. In an unfortunate grammatical disaster on the first page of the website, it claims to be the “THE WORLDS LEADER IN SHARK DETERRENT TECHNOLOGIES.” Shark Shocker uses  “5, N-50 Rated Neodunium Rare magents [sic] that are spaced out around the parameter [sic] of our band to create a magnetic field that extends out 360 degrees.” It also claims to be “100% EFFECTIVE”, which is such utter bullshit I just can’t even begin to convey the amount of disdain I have for them. They’re the Nigerian princes of the shark repellent industry, which is to say that they’re con men. Then, on the same page, they have a disclaimer that says, “Sharks are highly unpredictable and if anyone tells you that they have a product that is 100% effective in preventing a shark from biting you, they are lying.” They are telling you that they’re lying. 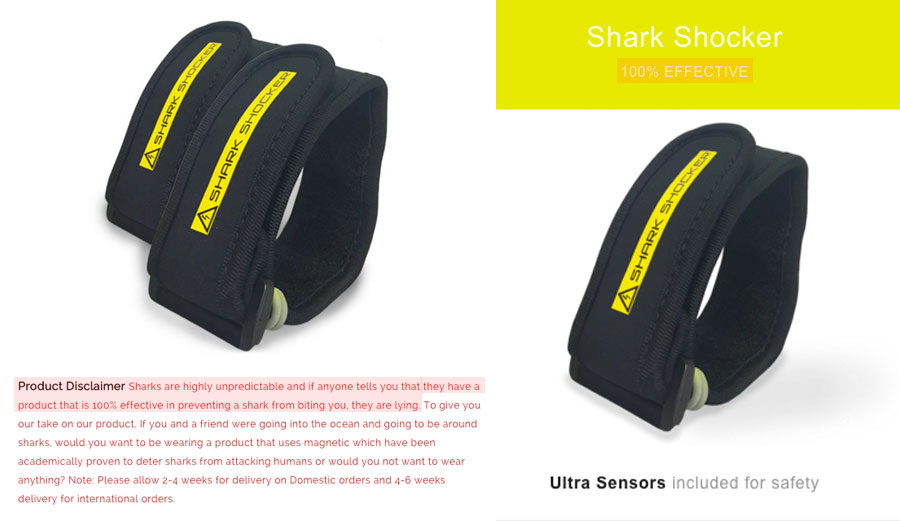 Shark Shocker: the Nigerian Princes of the shark repellent industry.

SharkStopper hasn’t actually been released yet, but they’re hoping to drop their products onto the market this year. The company is looking for investors, and they’ve gone a different route than most of the other shark deterrents. Instead of using electricity or magnets, they’re using sound.  “The PSR emits a patented acoustical frequency that repels sharks but does not harm them,” reads the site. “Testing the PSR using over ten species of sharks at various locations worldwide has consistently proven to repel sharks between five and ten meters. All of SharkStopper’s testing was conducted in baited conditions.”

This one’s pretty simple: just a little waterproof speaker that screams at sharks. It’s meant to be worn on the ankle, much like an ankle monitor for those under house arrest.

Anti-Shark 100 is basically mace for sharks, except it’s made from putrefied shark tissue instead of peppers. “The cloud of repellent sends a danger signal to any shark in the area indicating that a predator could be nearby, thus creating a temporary safety zone for the user,” according to the website. This one, although it seems almost as likely as a magnet to work, actually has some pretty solid testing behind it.

In 13 tests at Triangle Rocks, South Bimini, “an unambiguous halt in feeding behavior was observed within 1 min after product was released resulting in 100% of the sharks to leave the area for every trial conducted.” Of course, because most shark attack victims are taken by surprise, releasing dead shark juice isn’t exactly an option. But still, there’s something there. And it’s much better than shelling out $75 for a zebra sticker from Shark Shocker.

It’s safe to say, though, that there will never be a device that is 100% effective. But killing them all shouldn’t be an option when there might be more effective and humane solutions out there.