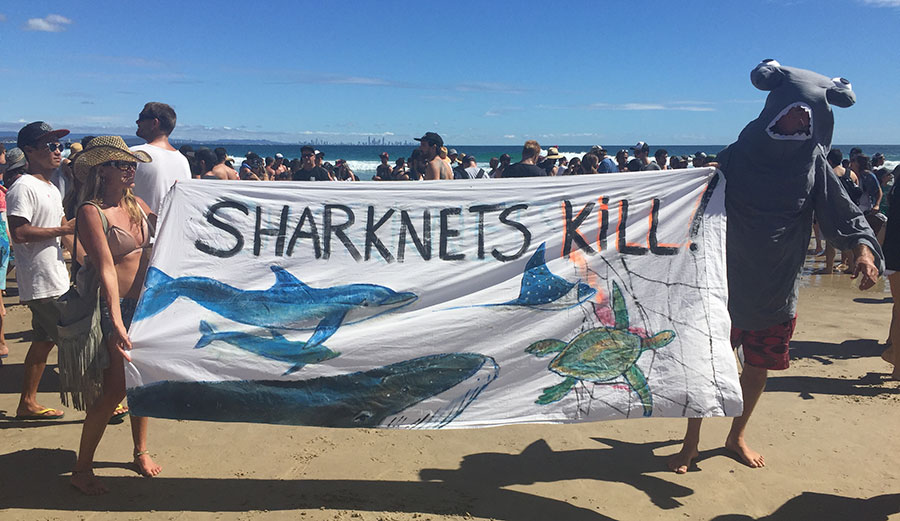 The planned protest was one of many the group has held since its inception in 2004 by professional free surfer Dave Rastovich and artist Howie Cooke. Photo: Diener

Five protesters, including one dressed in a hammerhead shark costume, stormed the beach with colorful signs as round four of the Quik Pro Gold Coast kicked off yesterday. The group, led by global oceanic nonprofit Surfers For Cetaceans, were protesting the shark nets lining Snapper Rocks, indicated by the floating yellow drums bobbing in the sea beyond the contest area.

The planned protest was one of many the group has held since its inception in 2004 by professional free surfer Dave Rastovich and artist Howie Cooke. The nonprofit’s mission is to “activate ocean-minded people everywhere to support the conservation and protections of whales, dolphins, and marine life.”

“We’re concerned about shark nets for the by-catch,” S4C co-founder Cooke told The Inertia as the first heat of the round got underway. “They’re called shark nets, but they’re actually killing whales, dolphins, rays, and turtles. It’s a very ineffective way of looking at mitigation on shark attacks.”

Cooke said that “shark attacks are relatively few compared to the mortality of all these animals,” quoting a statistic of 16,500 animals being killed since the inception of the nets. His group’s stance in that “there has to be a new, non-lethal way of dealing with this issue with new technology… we’re seeing baby humpback whales every year caught in shark nets and drowning. It’s just not acceptable.”

The group works to balance the burden that is the risk of shark bites for ocean enthusiasts with the reality of the shark’s importance to healthy ocean ecology as one of the most ancient living things on Planet Earth.

“It is a dramatic thing when someone gets hit and killed by a shark, there’s no denying that. I myself have been in the middle of shark attack, but it’s about finding ways to coexist with an animal that is incredibly important to the ocean ecology. They’ve been here for 420 million years,” Cook said, echoing a point made by one of the billowing painted sheet signs the group held up at Snapper Point which asked: “Who’s the Local?” 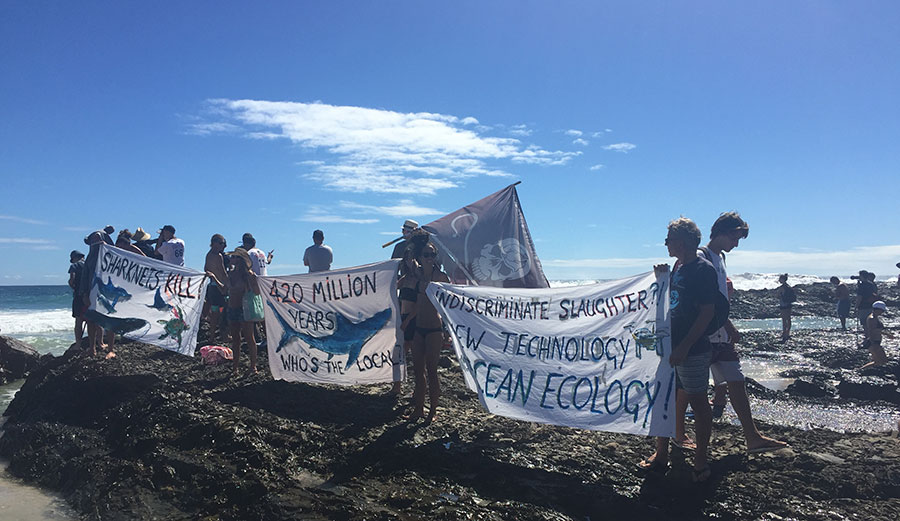 Cooke and his group are flipping the script, highlighting instances that show humans as the clear aggressors in the relationship with sharks. Photo: Diener

The group promotes education to understand why sharks behave the way they do and encourages responsibility in one’s personal choices to minimize the risk of shark attack through common sense efforts like not swimming in murky waters.

“The sharks aren’t targeting humans. They are testing what they see as some sort of strange animal on the surface, possibly half human-half plastic and they’re not sure what they’re dealing with,” he explained. “So they’re mouthing a board, often causing leg injuries on the back part of the board because they perceive the front of the board as the possible mouth that can attack them. They’re quite shy.”

Cooke and his group are flipping the script, highlighting instances that show humans as the clear aggressors in the relationship with sharks.

“Sharks are under a massive attack by humans,” he said. “Some of their populations are dropping to three percent. It’s the loathsome shark-finning industry and people killing sharks across the board no matter what they are, like hammerheads. Hammerheads get caught in these shark nets and they’re not known for ever having attacked human beings. In the cull that went on in Western Australia last year, something like 100 tiger sharks were killed, but there’s actually never been a tiger shark attack on a human in 85 years in West Australia. It’s a thing of creating a sense of the public or tourists feeling safer at these beaches, but shark nets are things sharks can swim around anyway, and mostly they’re caught in shark nets as they’re swimming away from a beach.”

The packed beach certainly took note of the protestors during the Wilkinson v. De Souza v. Andino match up, and filmer Caitlin O’Connor documented the protest as part of a documentary that will be presented at a fundraiser S4C is hosting in Byron Bay on March 27.

“We’ve got to change our attitude: sharks are a very important part of the ecology and we need a healthy ocean. We need to let the apex animals and all the marine life coexist the way they want to.”