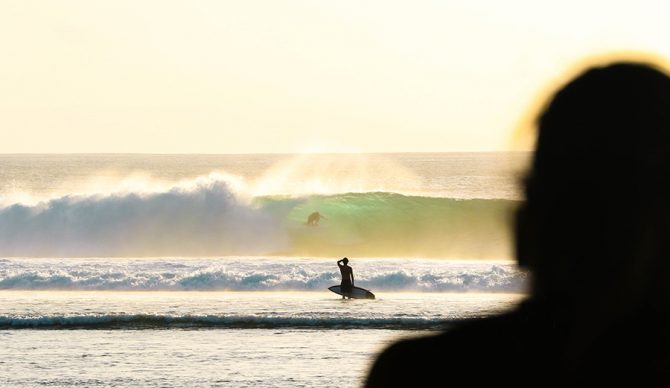 We know. But do you know? Photo: Jeremy Bishop//Unsplash

A couple of weeks ago images of an epic day of surf on the Great Lakes hit the webosphere, presenting to online audiences the best waves ever photographed on North America’s “Fourth Coast.” Overhead, barreling lefts, groomed into silver cylinders by frosty offshore winds, looking for all the world like…somewhere else in the world.

“More than a novelty wave,” asserted the proud local surfer/photographer responsible for the feature, and who clearly submitted the images as graphic evidence that the Great Lakes have serious surf and, by association, serious surfers. So serious, in fact, that he made a point of not revealing the location of the surf spot he was photographing, nor even the particular lake in which the waves were breaking. As if by doing so would expose the spot to hordes of less dedicated surfers from “inland” cities like Minneapolis, Columbus and Pittsburgh, who would immediately upend their lives and move to coastal hotspots like Sheboygan, Kincardine and Ashbridges Bay Park, prepared to hunker down and wait another ten years or so for a day like the one depicted, so they could then paddle out and ruin the legitimate experience of the region’s more righteous locals.

Ridiculous, right? We’re talking about the frickin’ Great Lakes, home to less surfers than you might find out on a average Saturday at Lower Trestles, Malibu or Waikiki. Yet you can’t blame the freshwater photographer for his act of obfuscation, having no doubt been affected by years of programming by not only the defunct print surf media, but powerful, pervasive commercial campaigns like “The Quiksilver Crossing,” Rip Curl’s “The Search,” and any number of so-called enlightened surf travel vlogs currently flickering across our computer and smart phone screens. All of which have seemed to delight in showing us all these great waves they’ve found, but not telling us where.

It wasn’t always this way. During the early days of the modern surf media, revelations were a mainstay of editorial content, with each new issue of SURFER and international surfing magazines featuring new wave discoveries in Australia, Europe, Africa, Mexico, the Caribbean and South America, exact locations included. Angourie, Jeffrey’s Bay, Crashboat, Matanchen Bay, Hossegor, Tamarin Bay, Chicama; the object of these many spot profiles wasn’t yet to titillate, but rather to establish that surfing was a global experience, with the love of riding waves bonding disparate cultures into a broader international community.

This tone of inclusion lasted until right around 1970, when a subtle (at first) ethical shift began to take place, with surfing becoming perceived more as an individual pursuit than a collective experience. This evolving mindset could be seen as an unanticipated by-product of 1968’s “Shortboard Revolution,” which saw surfing populations in many areas drop along with surfboard lengths, it being so much more difficult to learn, let alone have fun on, a board one could barely paddle. But while surfing may have become less fun, it most definitely became more serious, seen by those who adapted to the new boards and the new ways of surfing on them as something to be experienced on a deeply personal level; a private dance, not to be shared.

If this new, albeit somewhat delusional awareness dramatically changed the mood in lineups like Rincon, Ala Moana and even Canaveral Pier, the effect was doubled when it came to surf travel and its depiction in the surf magazines. This shift was manifested in a 1972 issue of SURFER, with the very first surf travel stories that did not include the location of the waves featured. Titled “El Dorado,” the first article chronicled a trip to what was only described as the West Indies, but was, in fact, the island of Tobago, with a dream lineup shot of Mt. Irvine captioned, “Distant point waves peel, waiting for someone.” The second story, with its title “Journey to the Isles of Solitude” was even more disingenuous, the unnamed isle in question being Mauritius, the surf spot Tamarin Bay, which had already been featured twice in SURFER, including an eight-page, full color article in 1966 titled “Mauritius — Surfing Paradise”.

The rationalization for this “show but don’t tell” editorial policy was to inspire surfers with the idea that perfect and perfectly empty waves still await for those with enough imagination to get out there and look for them — and that the drawing of a map would cheat such suitably motivated surfers out of the inherent joy of discovery. “I could go on about the place, but there’s really no point,” concluded the writer of El Dorado. “Besides, I’ve told you too much already. Just figure that whatever you desire is out there, at the end of some rainbow. All you have to do is find it.”

Fine sentiment, but one that conveniently overlooked the fact that almost all the surf spots featured in stories like these had been surfed previously by others, and most notably by surfers who didn’t take photos and send them off to be published in surfing magazines. Nevertheless, the rationalization has, for subsequent decades, been widely endorsed by editors and readers alike, the latter wanting so desperately to believe in the dream that that they’re willing to ignore the real, much less inspirational essence of the “show but not tell” surf discovery message, which in actuality reads something like this: “Look at these great waves we found. We’d tell you where, but then you might show up and ruin it all.”

Inspiration? Hardly. Cultural sensitivity? That excuse is even more laughable. Some years back Quiksilver, courting SURFER magazine for a “Crossing” feature set in Nicaragua, insisted the location be labeled as Mexico (it wasn’t). More recently, a popular European solo surf vlogger has put up several videos featuring his travels in West African, purporting to celebrate the region’s rich cultural heritage, yet without revealing the country whose waves he’s shown enjoying all by himself. In both cases the ethnocentric insensitivity on display actually characterizes imperial travel at its worst; that any Spanish-speaking country might as well be Mexico, and one African nation no different than another. But were these deliberate affronts? Doubtful. More likely they were simply manifestations of what might be considered our sport’s Original Sin: that inherently selfish desire to show but not share the joy of surfing. Even in Sheboygan.

So while the wider surfing world might now know that the Great Lakes occasionally gets some really good waves, rest easy “Fourth Coast” locals — we still have no idea where. And here’s where this website’s comment section really comes into its own, in regards to defining surfing’s current Zeitgeist. Do you want to know where these Great Lakes gems can be found? Or any of the fabulous, empty waves so regularly featured in videos and ad campaigns? Or would you rather have them left unidentified, to serve as a constant source of inspiration. Go ahead — you tell us.