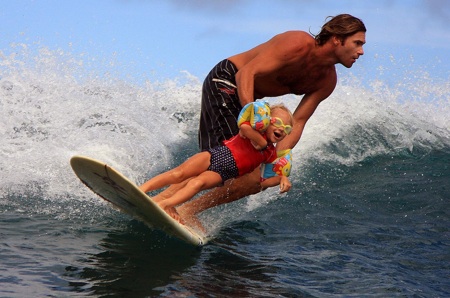 The death of a man I never met and the first time I surfed waves that terrified me converged a few days ago.

Like many tragic moments, I remember exactly where I was when I heard of Sion Milosky’s passing. Just having arrived home from a friend’s house, I was checking my email and taking one last look at the swell charts for the next day. Of course, I did my usual rounds of the surf media sites to see if anything important had happened.

“Sion Milosky Drowns” read one site. So I checked another. “Big Wave Legend Passes In Heavy Mavericks.” I had heard his name for the first time only months ago, and the stories that accompanied it assured his status as a legend. Big-wave hellmen like Sion Milosky don’t drown; They save other guys. They paddle into heavy sets, take four 30-foot waves on the head and come up laughing, not lifeless.

How could this guy be gone? What’s going to happen to his family?

With my own father overseas fighting in a war most people ignore, I have thought heavily about loss. But the thought and the reality are two separate things. Losing the man who taught you how to ride a bike and surf is devastating. For most people, Dad is your greatest hero, and I’m sure this rings true for the Milosky tribe. The thought that I may one day return to a fatherless home is…painful. There is no other word to describe it.

A couple days after the tragic news, the same swell that stole Sion Milosky from the world pounded my coast. Normally, I surf waves that are shorter than me.  To paraphrase Miki Dora, I’m a four foot and under man, they just seem more fun than 15-foot bombs, and far safer. In my neck of the woods, we have a plethora of overlooked spots that provide variety during most swells. Large ones make it more difficult.

On this particular day, I teamed up with John, a new friend of mine whom I had never surfed with before. We checked the usual haunts and found our favorite spots were all closed out with 18-foot plus, soupy surf, so we drove south on Highway 1 to Carmel’s art community to check the surf.

When we arrived, looking down the sand hill and into the clear blue water, we saw tubes – lots of them. Each one draining like a baby’s bathtub. As I said, I am a man of waves with slant walls. I’ve never been barreled in my life, and, believe me, it’s not for lack of trying. These waves were a solid 8-10 feet, and the faces were standing up straight and tall in the offshore wind as if to say, “I dare you.”

John, having much more experience than I, was frothing and no sooner than we arrived were we in our 4/3s and racing to meet the challenge. The paddle out was rough, and I was absolutely spent by the time we reached the lineup.

I sat watching for over a half hour, not willing to throw myself over the ledge without seeing what I was getting into. It’s a tiresome rookie cliché, but, boy, did the waves look smaller from the safety of the beach.

John was fearless and kept a steady wave count as he paddled for wave after wave. I knew I had to ride a wave – if only to get back to the beach. So, rather than sit outside and cheer on John all day, I chose to try my luck.

After what seemed like eternity I saw my chance. A shiny silver-blue face stood tall on the horizon. It wasn’t as large as the others, and it was makeable if I played my cards right. So I spun my 6’ 10’’ Vernor quad around, put my head down, and paddled hard. My board rose underneath me, and suddenly the ocean seemed to suck out from in front of me. I stood to my feet and slid quickly down the face, only to dig my nose hard into the bottom, front-flipping into the bowl.

The entire wave exploded on top of me, snapping my board in two and pinning me to the bottom. As I lay pinned flat in the darkness I thought of Sion: how it must feel to be pushed far deeper than I was to a dark rocky bottom. How it must feel to be there for four waves.

What was going through his mind?  There is no way he gave in. He must have fought hard for the surface; that’s what a real waterman would do. Take the waves on the head and then fight like hell for the sunshine. And so as the pressure lightened and I was able to kick off the bottom that’s exactly what I did. That first breath of air felt better than any before. I took my board in its two pieces and swam in. I was coughing up water that I didn’t even realize I had swallowed.

Sitting on the beach watching John enjoy the solitude and sloppy tubes, I couldn’t help but switch my mind back to Sion. A man I never met. Why was it him that came to mind? Shouldn’t I have thought of family, friends or my life? I guess it was because I was in need of  some inspiration. I needed that push to get up and get in.

And also, unexpectedly, to get back out.  I retrieved my extra board from the car and paddled back out. Sion would have done it. Foo would have done it. Same with Eddie or Jay. If men like that can continue to push their limits hard and humble in oversized surf, the least I could do was give it another shot.

The second go around proved more fruitful. And as I slid through my what could only be described as a “pseudo-barrel,” I had to smile and silently thank those who came before me for the inspiration that their stoke provided.