Sean McClenahan has wanted to ride a skimboard at Jaws for quite a while now. Skimboards, of course, aren’t generally thought of as big-wave surf craft — with the rare exception here and there — but McClenahan has been working his way up to it. “The desire to want to skimboard in big waves comes from years of paddle-in skim surfing finless at Honolua Bay and other spots around Maui,” he explained. That’s what gave me the desire to ride bigger waves finless.”

When the first glimpses of the truly colossal swell that was headed towards Hawaii began to show up on the charts, the entire big-wave surfing world sat up and rubbed its eyes. It was a long summer in Hawaii, and it was the first real big wave swell of the winter season. Jaws, as usual, was the main focus of attention, and McClenahan realized that his finless big wave dream might actually be realized.

On December 2, the swell was starting to peak. The buoys were reading 21 feet at 20 seconds, and McClenahan knew it was on. “I cruised down to Jaws from my house with my son Asher and friend Jeff Davis to check it early in the morning,” he said. “Being the first High Surf Warning of winter, we knew that all the boys would be on it.”

As expected, it was huge. McClenahan pulled on a wetsuit, impact vest, floatation jacket, and strapped on a Gath helmet. He jumped off the rocks and began the paddle out on a 52-inch skimboard shaped by Victoria Skimboards. The lineup was packed. Guns were the board of choice, and McClenahan’s skimboard looked a little out of place. He waited in the channel for six hours, watching some of the best big wave surfers in the world stroke into perfect Jaws. Midway through the session, the wind began to pick up, making it harder for people to paddle in.

“After seeing a few sets go by unridden and Kai Lenny going out the back to tow, we knew it was time,” McClenahan said.”Luckily, big wave surfing icon and legend Dave Langer from Nazaré showed up, threw me a rope, and said ‘let’s go.'” 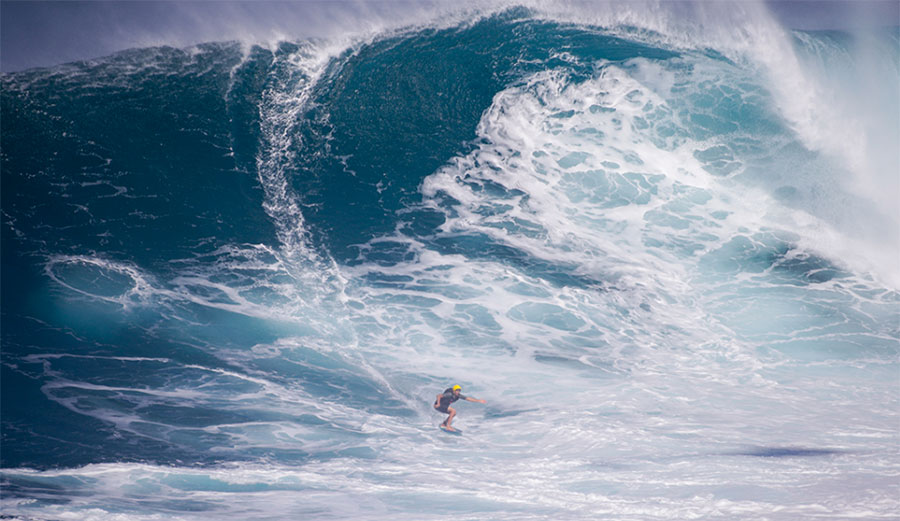 McClenahan and Langer looped around way out the back. The horizon lifted as a set approached. McClenahan and Langer let the first wave roll under them, then pulled the trigger, gunned the ski, and whipped into the second wave. “When I got to the bottom,” McClenahan remembered, “I was going so fast that I almost slipped out and couldn’t set the rail. Thankfully, I managed to hang on by my tiptoes and stick legs. It felt like snowboarding a double black diamond for a second. When I made the wave I started screaming at the top of my lungs.”

With the adrenaline roaring through his blood, he wanted another one. Langer picked him up and they headed back to the outside again, where they found another decent-sized wave. After he made that one, too, McClenahan decided to call it a day, for safety’s sake. As it turned out, however, getting back in proved almost as dangerous as surfing the wave.

“I jumped on the life sled and got dropped off by the rocks to paddle back in,” he said. “While getting dropped off I started to try to paddle in but was too far over already.”

He started to feel himself getting sucked into the huge boulders that lie along the Jaws shoreline and knew that he was headed directly for the absolute worst possible place to exit the water. “For almost ten minutes I duck dove the shorebreak and battled the current,” he said. “Finally a larger wave broke out farther and I was able to bodysurf the whitewater up the rocks like a monk seal. My ankle got wedged in a rock for a second, but luckily I was able to pull it out just in time before the next shorebreak knocked me on the rocks again.”

Eventually, though, he made it back safely. Exhausted, he stood there catching his breath as a group of spectators clapped for him. “I stood there trying to fathom what just went down,” he said. “Truly one of the heaviest adrenaline rushes I’ve ever had and the largest wave I’ve ever gotten so far!”