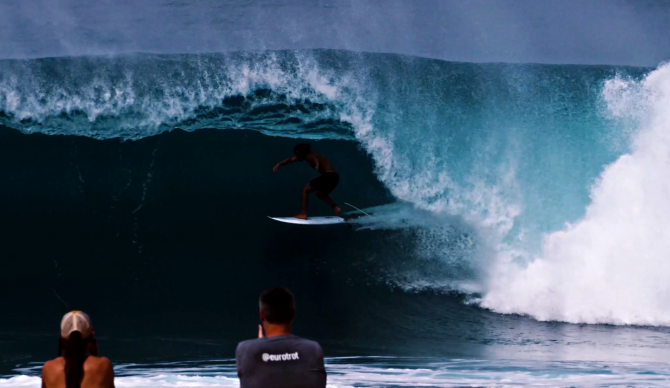 I imagine it’s tough to spin a conversation like the one Logan Dulien just had into a “look on the bright side” moment. The Snapt4 producer had just finished a mad dash of calls to all the surfers in his latest film, sharing the final results from the competition-format flick his stars spent two years making. A six-figure prize purse was attached to the whole endeavor and the surfer with the best part got half.

The problem? The winner picked by the Snapt judges this week — Mick Fanning, Bobby Martinez, and Taj Burrow — was never eligible to win the $50K in the first place.

“Money comes and money goes. It’s not the end of the world,” Barron Mamiya told me over the phone, addressing his expensive DQ. If he was upset about the news he wasn’t showing it. So why was he ineligible for his cut of the cash?

The snafu started when Barron, several months into working on the film already, decided to scrap his work and start from scratch. The Haleiwa native signed on for the film well into its production with the rest of the cast having a healthy head start.

“I was sitting on clips and was just kinda over it for a second,” Barron says. “So I posted my clips (to social media) and I told Logan, ‘Hey, don’t worry, I’ll get more.'”

A major stipulation for inclusion in the film was that the final product would feature footage surfers hadn’t released anywhere else, including social media or one-off edits. Dulien knew that was a big ask from the athletes in today’s media landscape but with so much money on the line, everybody was on board with the requirement. There were other guidelines, like a limit on slow-mo clips and no lifestyle-type shots, but the social media embargo was the film’s “golden rule,” as he called it.

The two agreed to that plan and Barron got back to work. Dulien remembers seeing the new clips as they came in and, “felt he’d definitely stepped up since the decision,” he says. “Alright, I get where he’s coming from.”

The only problem was not long after getting a fresh start creatively, Mamiya went down with nagging injuries that would keep him out of the water the final six months of production. That wasn’t in the game plan.

“When it was time to edit that left him with two ways to go about it,” Dulien explains. “He had a mediocre section that wasn’t gonna showcase his surfing the way we all want to see (but it was exclusive) — and it definitely wouldn’t be on par with a lot of the guys in the movie — or he could use clips that he ran (online) but he was not gonna be eligible for the money (because they weren’t exclusive). What do you do?”

Ultimately, the two came to an agreement. Mamiya wanted to submit his best surfing with the understanding he couldn’t win, even if the judges chose him.

“At the time I don’t think he thought he was gonna win,” Dulien says.

“It’s a good part but not a winning part,” Mamiya remembers thinking, comparing what he had to others, like the eventual contest winner, Jack Robinson.

But he was wrong. It was a stellar part. Taking Barron Mamiya’s scores out of the equation, the rest of the field got bumped up a spot – Jack Robinson took the $50,000 top prize, Mason Ho ended second and nabbed $20,000, while Seth Moniz rounded out the top three, taking home $10,000.

“When I first watched the full movie it was refreshing to see that everyone had a different style, surfing different waves. Everyone’s sections were so unique,” Robinson told me.

He credits variety to his and Mamiya’s high scores, but ultimately feels like the entire group was a lot closer than meets the eye. “If you look at the scorecard it was really close between around eight of us,” he says. “Everyone was ripping.”

“Barron’s section was insane,” he adds. “Even though Barron didn’t win the money he should be proud of his section and the scores he got.”

And this is where that “look on the bright side” conversation comes into play.

“The other side of it is I think people are catching on to how good Barron surfs. And it’ll be a confidence booster for him too,” Dulien says.

Before 2020, Barron Mamiya was climbing well up the WQS rankings, rocketing toward CT qualification. He’s become a standout at Pipe, especially in the past few seasons. And now he has votes of approval from World Tour vets to pump those sails further — Mick Fanning, Taj Burrow, and a perfect 10 from Bobby Martinez, a guy who impacted the WSL in his own way, retiring rather than staying on the ASP’s “wannabe tennis tour,” as he called it.

A tennis tour the Snapt series is not. And with that, Snapt5 oughta be a doozy.