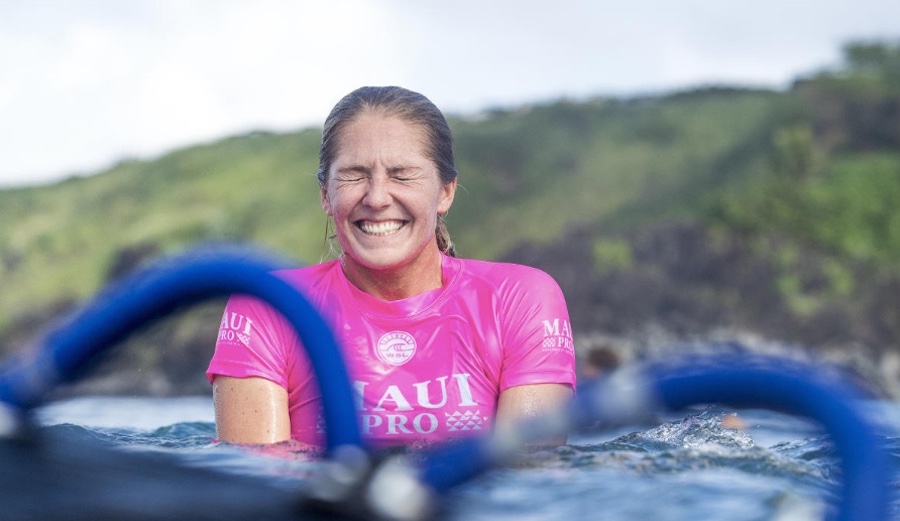 Stephanie Gilmore was all smiles when she won the 2017 Maui Pro. Depending on how she does in France, she could clinch her seventh world title there, or take the 2018 title race to Maui. Photo: Kelly Cestari/WSL

After winning her first heat in France, Stephanie Gilmore is now four consecutive heat wins away from matching the world title count of the winningest female professional surfer in history, Layne Beachley. Lakey Peterson is the only one standing in her way.

During the Surf Ranch Pro early last month, Gilmore opened up to The Inertia’s Senior Editor Joe Carberry about nerves being in a two-horse world title race. “I feel it at moments,” she said. “I watch Lakey (Peterson) take off on a wave and get a nine-point ride and I go, ‘yeah that’s right she’s right there and she’s fighting to the death for this thing.’ To go for your first you have nothing to lose. I’m not playing a defensive game but to be defending world titles is kind of hard, too. I haven’t won a world title for a long time so I try to look at it as it’s new to me and it’s exciting and fresh.”

In an interview with the WSL after her recent Round 1 win, Gilmore added, “it’s all about the rivalry and drama.”

“I’m focusing on having fun, but you have to be fierce right now. There’s a lot on the line,” she said.

Right now, it’s Gilmore’s title to win or delay to the final event of the season, the Beachwaver Maui Pro at Honolua Bay. And while she’s favored to clinch number seven this year, Lakey Peterson isn’t going down without a fight.

After also making it past her Round 1 heat, Peterson told the WSL that she’s staying focused on taking things one heat at a time.

“Honestly, I wasn’t too nervous,” she said. “I’m more focused on each heat and then later I can deal with any scenarios that unfold. However, there’s no denying there is relief in getting through that first heat. You move through to Round 3 and you can get your groove on. I can now feel out my boards, enjoy where we are and be ready for whatever comes my way.”

According to the WSL, whether Gilmore wins her seventh world title depends entirely on her and Peterson’s respective results in France. Here are the official scenarios:

If Gilmore wins in France, she wins the world title.

With the next few days of the forecast calling for “marginally contestable” to “barely rideable” surf, we’re waiting on pins and needles as the best bet for decent surf looks to be slowly filling in for Tuesday or Wednesday of next week. Stay tuned.