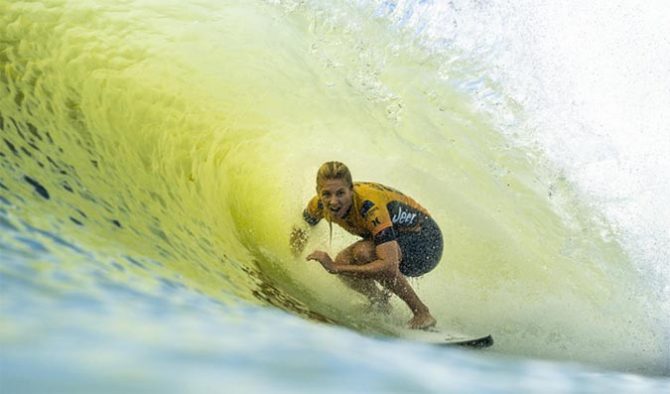 Gilmore has won at Bells, Rio and J-Bay this year. Would one more win seal it?

Winning world titles in surfing is anything but easy. With ten events over the course of 12 months, a lot can happen, from bad results to inopportune injuries to just poor headspace, all of which can derail a campaign at any time. Stephanie Gilmore is chasing history, a seventh title that will tie her with fellow Aussie, Layne Beachley, for most all time. But the game has changed during the course of her career. The talent level in women’s surfing has bumped up significantly since Steph won her first in 2007. She spoke with us from the Surf Ranch Pro as the pressure intensifies.

So, straight up, are you feeling the pressure?

I feel it at moments. I watch Lakey (Peterson) take off on a wave and get a nine-point ride and I go, ‘yeah that’s right she’s right there and she’s fighting to the death for this thing.’ To go for your first you have nothing to lose. I’m not playing a defensive game but to be defending world titles is kind of hard, too. I haven’t won a world title for a long time so I try to look at as it’s new to me and it’s exciting and fresh. I feel like Lakey and I have different approaches but at the same time, kind of similar.

Does it add pressure, given that a competition in a wave pool goes towards world title points?

After the first time I came here and surfed I was in heaven and I thought, ‘yeah, I’ll surf any contest in this wave pool.’ It’s a dream to have controlled conditions. As surfers we chase after that perfection and the first time I came here it was a ‘perfect’ wave. They actually had to make it less perfect so it was more competitive and we were able to mix it up a bit. I love it, as long as it’s well balanced and heavier on the ocean side (so there are differences in each wave). I think about a world champion, they have to win in different conditions all year long. A freshwater, artificial wave is just another condition.

Talk about the pay equality announcement this week. How did that affect you?

I never thought I’d see this moment in my career. I feel bad, I’m getting a lot of ‘thank you’s’ and ‘congratulations’ from people around the world but I’m not the one to take the credit for this because there have been so many women working tirelessly for generations across so many industries out of the spotlight. They’ve been fighting uphill battles on this for hundreds of years. I’m really proud to be a part of it. (WSL owners) Dirk and Natasha (Ziff) are the most incredibly-generous people and they knew what was right and equality is right and for surfing to lead the way is incredibly powerful. Surfing is a young sport so we can map where we want to go and do it our own way. We’re really lucky to have people like Dirk and Natasha who see the value in doing things like this, not only for women but to set the standard for other industries and other brands and so many other workplaces around the world. It was a really special moment for all of us.

So are you ready for the wave park phenomenon to be part of the tour every year?

For sure. I know people are torn, some don’t like it, some do, I think it’s rad. At the end of the day we can hate it and try to protest against it but they’re going to happen, they’re going to be built anyway. They’re going to pop up, it’s inevitable and we may as well just make sure they’re done right and train for them. They’re a great training tool and great for the sport.