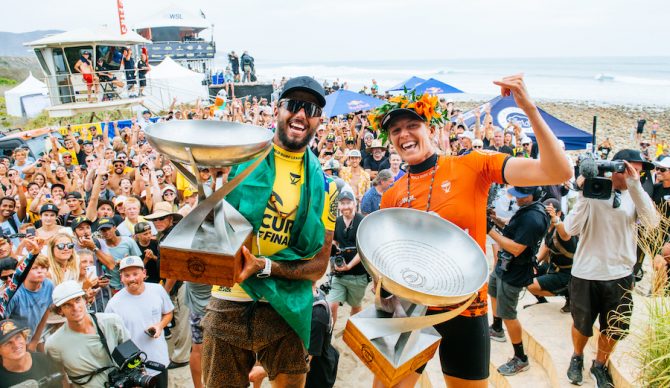 What a day for professional surfing. The second running of the WSL Finals at Lower Trestles did not disappoint, both in terms of waves and epic performances by the players. Conditions were pristine early on and while the wind picked up around noon and may have mucked the WSL broadcast, California’s high-performance capital delivered far more than its forecasted four to six-foot day.

As far as clutch performances go, you couldn’t ask for anything more compelling than Filipe Toledo’s first world title and Stephanie Gilmore’s eighth – at 34 years old and four years after her last title in 2018. Gilmore’s win was particularly historic, fighting her way from fifth to first in the WSL’s ranked bracketing format.

“I literally can’t even explain it,” she told me. “I’m still thinking about the mistakes I made in my first heat. But it’s incredible, I feel like I just proved that it’s possible, to come all the way from the bottom and take home the win. There’s a bit of mixed feelings though, especially with Carissa having such a stellar year.” 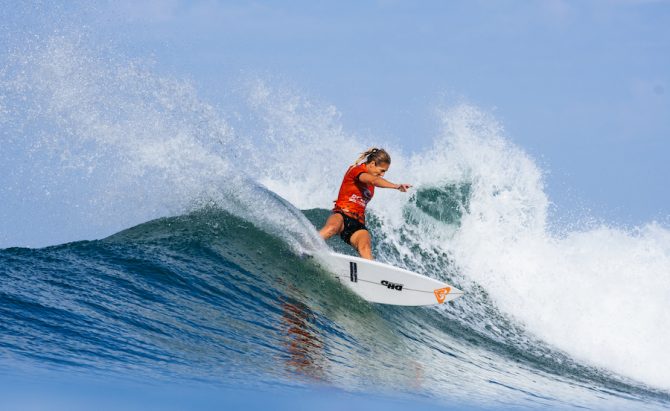 Gilmore and Brisa Hennessy started the day, and frankly, it didn’t look good for the Australian. She caught, and fumbled, her first two waves. Meanwhile, Hennessy racked up a six and a seven, putting Gilmore in an immediate combo.

“My first two waves were almost identical to what I did last year,” she said in her post-heat interview. Last year saw her fall in the first-round to Johanne Defay, recording only a 6.7 heat score to Defay’s 12.17. “And I just paddled back out and was like ‘it’s not going to go that way again.'”

Reader’s Digest version: Gilmore slowly fought her way back and with just a few minutes to go found herself needing a 6.4 for the lead. With 30 seconds left the set Gilmore was waiting for materialized and she capitalized in classic style, linking a variety of turns to the beach for a 6.83 and the win.

Heat one for the men had tense energy from the start. Before priority was established, Italo Ferreira and Kanoa Igarashi got in a tussle over the first wave. Hands were raised towards the judges’ tower, but without established priority, there was no interference call.

The wave that did finally break open the heat came in the last 10 minutes, a skyward punt from Ferreira. The 8.17 was the first excellent wave score of the day, propelling the 2019 champion into the next round. And despite the tense start, the pair shared a party wave in, and hugged it out in the shallows. It made me ponder if the same would have been possible were the roles reversed. 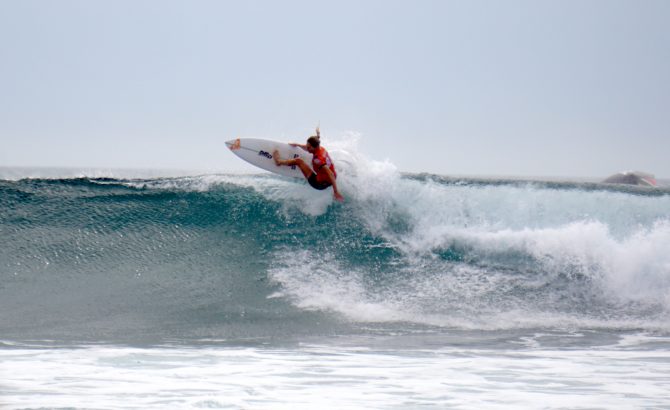 Stephanie throws down what the announcers called a “club sandwich” rotation. Photo: WS.

Gilmore then took to the water again against Tatiana Weston Webb. The high tide slowed things down until Gilmore threw a “club sandwich” rotation with eight minutes to go — a move never seen from her in competition. The judges rewarded her with an 8.3 and the lead that would hold off a late charge from Weston Webb. 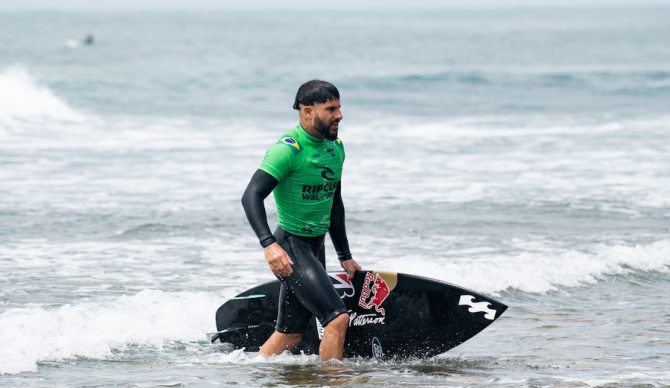 Italo emerges from the water after taking down Jack Robinson on his way to meet Filipe Toledo. Photo: Pat Nolan//WSL.

In 2021, most heats in the WSL Finals went to higher-ranked surfers, the winner of each heat usually falling to their next opponent. This year was different as we saw two athletes, Gilmore and Ferreira carry the momentum from their first heat wins through to the finals where they squared up against Toledo and defending women’s champ, Carissa Moore.

Gilmore certainly used momentum in her matchup with Johanne Defay. She put Defay in combo within the first 10 minutes and kept her there until the very end. Her second wave, an 8.83, was the highest scoring wave to that point in the entire contest.

Neither Ethan Ewing nor Jack Robinson put up much of a fight against Italo Ferreira on the men’s side. Both surfers basically gave him his pick of waves at the start — a surefire way to lose against a surfer who showed he just needed space to put on an air show. Both Australian surfers got a second wind in the back halves of their respective heats but neither was able to overcome Ferreira’s lead and an all-Brazilian men’s final was set. 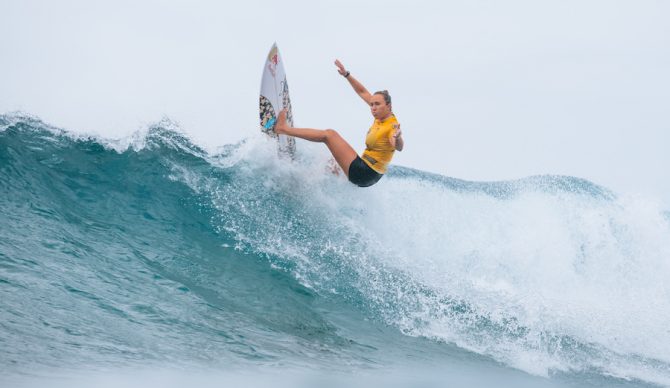 Carissa was surfing well, but not well enough to take down the GOAT. Photo: Beatriz Ryder//WSL.

The wind had picked up by the time Gilmore and Moore hit the water for the women’s final but the waves were still pumping. The pair traded outside bombs but Gilmores’s mojo was apparent, carrying her through the first heat with an 8.33 and a 6.67 to the rankings leader’s 5.0 and 5.9. Gilmore peaked at the right time. She looked the best I’ve seen all season and got better with every win — a genuine surprise given the task at hand of checking off five consecutive wins against the world’s best.

It was truly an inspiring performance. It was obviously unprecedented and actually, a little unexpected. The true beauty was that no one was talking about Gilmore in these Finals. But there she was, as clutch as ever, throwing it all in our faces: basically murmuring, “don’t forget about the GOAT,” without actually saying it. 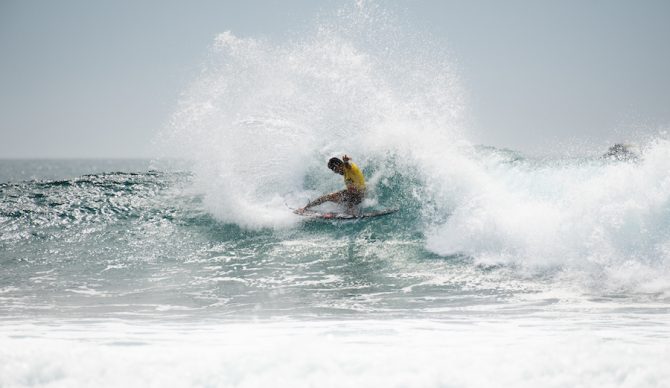 Filipe’s surfing was precise, powerful, and perfect throughout his two heats against Italo Ferreira for the world title. Photo: Pat Nolan//WSL

With history waiting, all that remained was the Toledo-Ferreira matchup. “Who do you have winning?” I asked Yago Dora. “Hard to say,” he replied. “Filipe is hungry and will be tough to beat, but Italo is all warmed up…”

I don’t fault Yago for not picking sides between his countrymen. By this point it genuinely did feel like a toss up. All the momentum and tribulation of the 2021-2022 season sat behind Filipe Toledo, who’d come close to more than one world title — including a showdown with Gabriel Medina in the 2021 final — but painfully short. Italo clearly had the momentum of the day. Toledo came out of the gates swinging though, eliciting roars from the crowd on his opening wave. 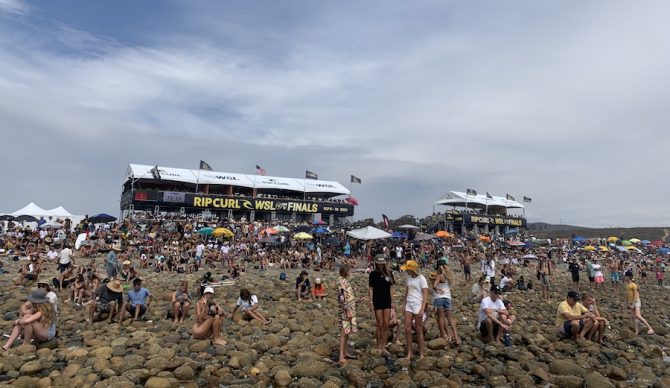 The beach and cobblestones were packed as the action unfolded. Photo: WSL

Neither surfer held anything back in their best-of-three matchup. It worked for Toledo but not so much for Ferreira, who seemed to run out of steam on his opening waves. Toledo was a machine, looking like he had his first world title in the bag from the start of the second heat after taking out his countryman in the opening set.

Ferreira did add drama with five minutes to go in the second stanza, launching a comeback campaign as he stayed within reach on the scoreboard. The two split the peak on a set wave late in the heat, both notching excellent scores that ended up putting Italo Ferreira in a larger hole with too little time on the clock. The win for Toledo comes after years and years of flirting with the edge of greatness (and maybe silencing a few critics?).