Surf Camp Owner Drops In on British Surfer, Then ‘Bullies Her Out of the Water’ 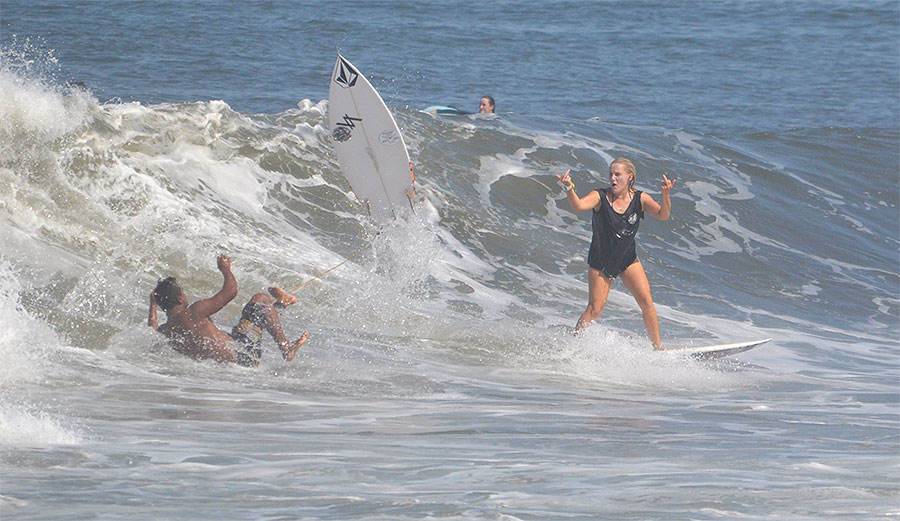 Allanah Brown giving the two finger salute after getting dropped in on by local surfer Muklis Anwar. Image: Facebook/Allanah Brown

Allanah Brown, a surfer from Newquay, Cornwall, has been traveling to Bali for nearly a decade. This year, in fact, was her ninth year at Medewi, a small town in Western Bali. This visit would prove to be a little different—Brown was apparently “bullied out of the water” by local surf shop owner and Volcom team rider Muklis Anwar. Brown took to social media to air her grievances:

“Today, I was bullied out of the water here in Medewi, Bali. I was sat in the line up for 40 minutes, this was my SECOND wave of the day and I was sat behind the main pack waiting for scraps because it was so busy.

I have been coming back to Medewi for 9 years and today on this wave, I was dropped in on by Local sponsored Volcom surfer Muklis Anwar. He screamed and swore, raced up to me and tried to run my board over, hitting me, but luckily I managed to dodge him, so he violently kicked his board at me… he then told me to f**k off and to leave the water.

I left the water hysterical. I now feel completely shocked at how I have been treated, let alone as a girl and incredibly intimidated by somebody who is supposed to be a role model to the younger generation of surfers in Bali. How am I supposed to react to this in water? I’m not an aggressive, violent person and as a female, I shouldn’t have to deal with being victimized by anyone.

As you can see in the photos, I have done nothing wrong, just trying to have fun in the ocean, because that’s why we surf? I was supposed to be staying here in Medewi for a month, but now I’m leaving out of principle and how am I supposed to feel comfortable here?

Guess I won’t be coming back to Medewi for the 10th year.” 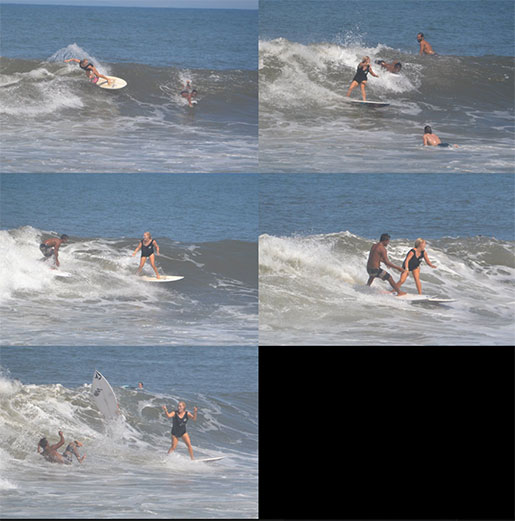 A sequence of the wave that caused the problems. Photos: Facebook/Allannah Brown

Anwar, who was born and raised in Bali, rides for Volcom and owns the Medewi Secret Surf Camp. He is currently being skewered on social media for his behavior. “Give this place a miss,” wrote one review on Medewi Secret Surf Camp’s Facebook page. “Awful behavior from the owner – he is physically and verbally abusive on and off the waves. There are way too many other surf camps out there to support this kind of attitude to tourists.”

“Such a shame the owner doesn’t actually want tourists on ‘his’ break surfing his waves, to the point of threatening and calling women “c**t” after an incident in the water,” wrote another.

It appears that Anwar may have made it worse for himself after responding to a comment on Volcom’s age: 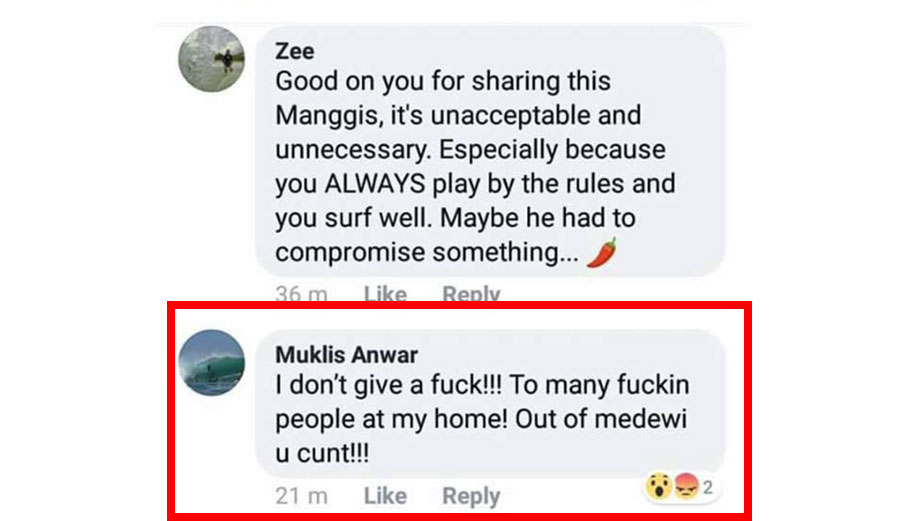 Anwar released an apology soon after the photos of the run-in hit the internet (all sic). “I have a bad day today! Sorry I know I have dropped on a girl today and she have a photos showing that I am on a bad side,” he wrote. “I would love to say sorry about it. It wasn’t like this. I was try to make a joke at the beginning of the waves and she were screaming at me so hard and so u know I were angry but to be honest I were not a guy that normally did this! It’s surfing everyone can have a bad day of surfing and specially I just try to surf my own break with so much people on it! I try to go and meet her to talk about it but unfortunately she’s left! Sorry once again! It’s my fouls! Everyone make mistakes And This Was mine! Sorry to allanah brown.”