If you’ve even been on a boat trip, you know that sometimes the large dollops of pleasure come sprinkled, or even, doused, with pain. Take Gabriel Dinis for example, in the latest episode of EDP’s Surf For Tomorrow documentary series.

The talented Portugal grom is on the fifth day of an epic swell in the Maldives. On her first trip to the tropics, and averaging nine hours a day in the water, her normally wetsuit-clad skin has been ripped to shreds by overdoses of sun, wax, and salt.

“The will to catch perfect waves was stronger than the pain I was in,” Dinis says simply, crisscrossing her thighs with another roll of medical tape. “As long as you have your head in the game, you’re ready.”

The game Dinis is referring to isn’t just a session in perfect waves, but her longterm goal of becoming a Championship Tour surfer. EDP’s Surf For Tomorrow is a 10-part documentary series that provides an in-depth look at the very start of that process of qualifying. 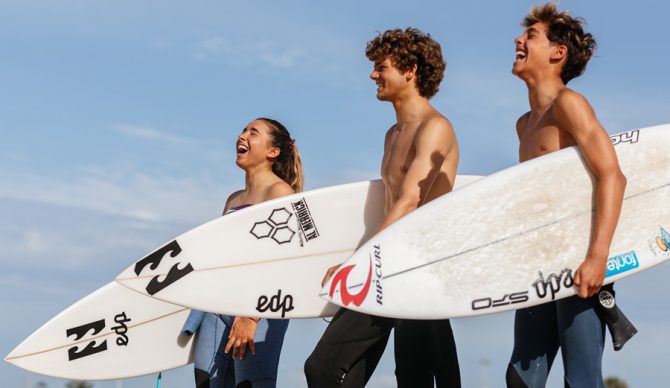 You’d be smiling too. Photos: Surf for Tomorrow

“Professional surfing was my one big dream 50 years ago and to see where the sport has come has been beyond my wildest expectations,” said Shaun Tomson, the 1977 World Champion and narrator of the series. “That’s why it’s been such a pleasure to watch and tell the stories of these five surfers in the Surf For Tomorrow program as they chase that same dream of being a professional surfer. ”

João Mendonça, Gabriela Dinis, Matias Canhoto, Hans and Kai Odriozola, all between 13 and 16, are five of Europe’s most talented groms who were chosen for the program. They are under the guidance of legendary surf coach José Seabra, who took Tiago Pires from an unknown Portuguese kid to a CT star. Through mentorship, elite sports coaching, travel, competition, and, most importantly, time in the ocean, the end game is to have the athletes reach the elite of world surfing, the CT.

“My dream is the same as everyone here on the Surf For Tomorrow team; to make it to the CT and become World Champion,” said 13-year-old Hans Odriozola, a Basque surfer who looks to have what it takes to get close to his rather lofty ambitions.

Now EDP (Energias de Portugal) isn’t your usual surf-team sponsor. The utility, based in Portugal, operates in 22 countries and is the fourth biggest wind-energy producer globally. Using the power of wind, sun, and water, the company is aiming to be 100 percent green by 2030. With this program, EDP is investing in the future of European surfing and playing the long game to see where these kids can take their talent. Europe may need this type of investment if its is to keep pace with the Brazilians, who seem destined to dominate the sport.

As the teenagers chase their dreams though, the roller coaster of emotions that comes with expectations and responsibility is compiled in realtime over 10 episodes. 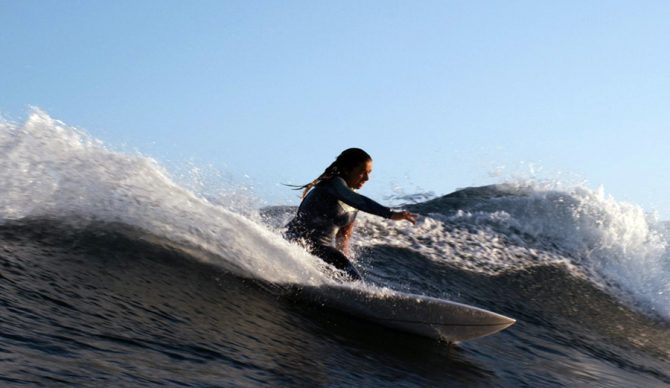 Living in a state of shred. Photo: Surf for Tomorrow

In Episode 2 “Rocky Road” for example, we watch as Portuguese prodigy João Mendonça deals with being diagnosed with Osteochondritis, a joint condition in which bone underneath the cartilage of a joint dies due to lack of blood flow.

It’s a rare look into how injuries can derail careers even when athletes are still in their teens. In the latest episode though Mendonça is back, fully fit, and the trip standout as he threads through countless eight-foot, dream-blue funnels at Cokes.

“For me, surfing represents a freedom and a type of unstructure,” concludes Tomson. “So it’s interesting to see how this program adds structure to the kids’ development and we can watch, in realtime, the results. It shows me just how far this sport has come.”

Find every episode of Surf for Tomorrow, here.