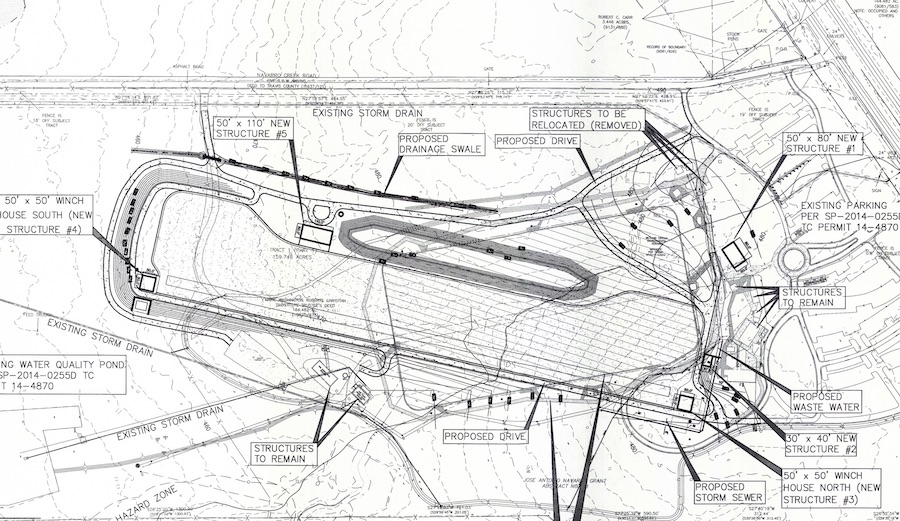 A permit application submitted in Austin, Texas reveals what the World Surf League plans to do with what was once NLand Surf Park. Photo: City of Austin Development Services Department

The World Surf League is full steam ahead with plans to retrofit what was formerly NLand Surf Park in Austin, Texas with Kelly Slater Wave Company’s proprietary technology, according to public records obtained by The Inertia.

According to a site plan submitted by engineering company Carlson Brigance & Doering Inc. to the Austin Development Services Department on September 4, much of the infrastructure of the old NLand facility would remain at the revamped facility, including parking lots and a handful of structures around the periphery of the now-shuttered pool. The plans clearly show, however, that instead of a pier-like structure bisecting the middle of the pool with a foil that travels underneath – characteristic of the first iteration of Wavegarden’s artificial wave tech – the new facility will look much more like the WSL and Kelly Slater Wave Company’s facility in Lemoore. The project permit is still under review by city staff, and the application stopped short of including a proposed timeline or an estimated duration.

When it first opened, NLand Surf Park became the first surf park to open its doors in North America. That came with its share of hiccups, but after closing for the season in November 2018, the park never reopened. In January, the World Surf League told us it had acquired “land and assets” from NLand for an undisclosed sum and hinted it would be moving forward with plans to retrofit the site with Kelly Slater Wave Company technology. Now, that aim has simply been confirmed. Though, the plan must first overcome the proper regulatory hurdles.

Neither the World Surf League nor Carlson Brigance & Doering Inc. immediately responded to The Inertia‘s request for comment. But, should plans for Surf Ranch Austin sail through the permitting process, it’s at least within the realm of possibility that the facility could be up and running in time for Texas to get its first Championship Tour event next year. And with Trestles officially off, that could mean landlocked Austin might play host to the only CT event in the mainland U.S. More on this as it develops.