Surfing After a Tattoo: How Long Should You Wait?

I have a few tattoos. One relatively large one that stretches from my hip to my armpit, a little one on my arm, and a hilarious (to me, anyway) drunken butt tattoo that is much bigger and brighter than I asked for. All of them have aged decently well — fading about as much as expected, no gaps in the ink, etcetera — and I did almost nothing to ensure that. I surfed (in a wetsuit) within a week of getting the one on my ribs and basically forgot the one on my butt even existed, but apparently, I’m dumb. Which I knew already, but still. Surfing after a tattoo is not the best idea, but lots of surfers have them. So how long should you wait to surf after getting a tattoo?

Well, it sort of depends. The long and short of it is you should wait until your tattoo is fully healed. That means the scabs have fallen off, the redness is gone, and your skin has stopped doing that weird thing where it flakes off around the edges and itches so wonderfully. Healing time, of course, varies widely. Person to person, situation to situation. But let’s say, just for the sake of example, that you’ve been taking good care of your two-week old tattoo. You’ve been putting all the stuff on it your tattoo artist has recommended. Keeping it out of the sun, not picking the scabs off, and all the rest.

Then, you check the forecast and see a swell of epic proportions pop up. The direction is exactly what your spot needs, the wind is just a whisper of an off-shore, and the period is long. It will be good, that much you know. So should you go? Probably not… unless your tattoo artist gives you the go-ahead.

“That’s they key – your tattoo must be fully healed,” explained the artists at Adrenaline, a Canadian-based tattoo studio. “That means you should return to our studio for your follow up, and when your artist inspects the work and gives you the thumbs up, you can then (and only then) return to the sea.”

Like almost everything else in life, there are varying shades of grey. If you’re tattooed up your ribs, over your shoulders, on a knee joint — basically anywhere that stretches out when you’re surfing — it’s pretty essential that you hold off until all those scabs are completely healed. 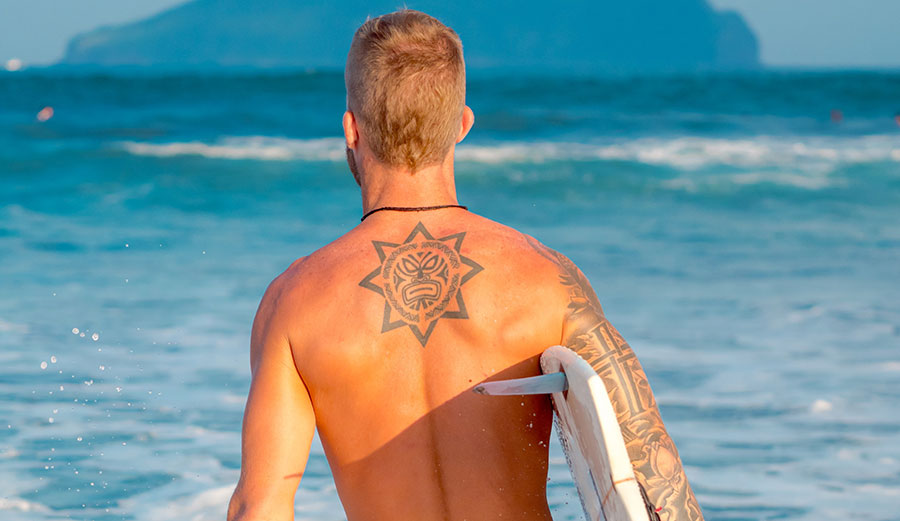 To each their own, right? Even this guy wants his tattoos to last. Photo: Unsplash

“If you’ve received a tattoo on your front thighs, abdomen, chest, or anterior deltoid (front shoulder), and you plan on surfing, you must absolutely wait until you’ve been cleared by your tattooist,” the Adrenaline artists explained. “Simply put, if your ocean activity puts any sort of strain or impact on the area where your tattoo is, be patient.”

Water quality can be an important factor, as well. While I hope you’re not surfing in a sewage-laden spot frequently, if you are, I get it. I have. A wave is a wave, after all, and a little poop in the mouth never hurt anyone except for the people it hurt.

“You’d better believe that water quality makes a difference, especially if you decided that you’re going to enter the water before getting the go-ahead from your tattooist,” the Adrenaline artists continued. “Polluted ocean water carries a lot of bacteria. Once you’ve been cleared, check the most up-to-date water quality advisories for local area beaches before getting in, just to be thorough.”

I would hope that it should be obvious why you should be careful with a new tattoo, but maybe it’s not. It’s not just that you could potentially ruin the piece of art that’s going to be on your body forever, it’s that you could get a serious infection. Don’t click here if you’re squeamish, but it’s an example of a tattoo horror story.

Ideally, you’ll just give your tattoo a gentle wash every now and again. Full submersion isn’t recommended until it’s healed.

“Like with any open wound — which is essentially what a new tattoo is — submerging your tattoo could potentially expose it to harmful bacteria in the water. Infections can range from mild to severe,” said Adrienne Santos, a writer for Healthline.

“Though rare, sepsis and death are a possibility. This was the case for one man who contracted Vibrio vulnificus (also known as the flesh-eating bacteria) after swimming in the Gulf of Mexico with a new tattoo. Giving your tattoo time to heal before swimming is just as important for your health as it is for your new body art.”

So all things considered, it’s best to wait at least a month before surfing after getting a tattoo. There will be another swell, I promise, and a few waves aren’t worth the possible destruction of a life-long piece of art on your skin.