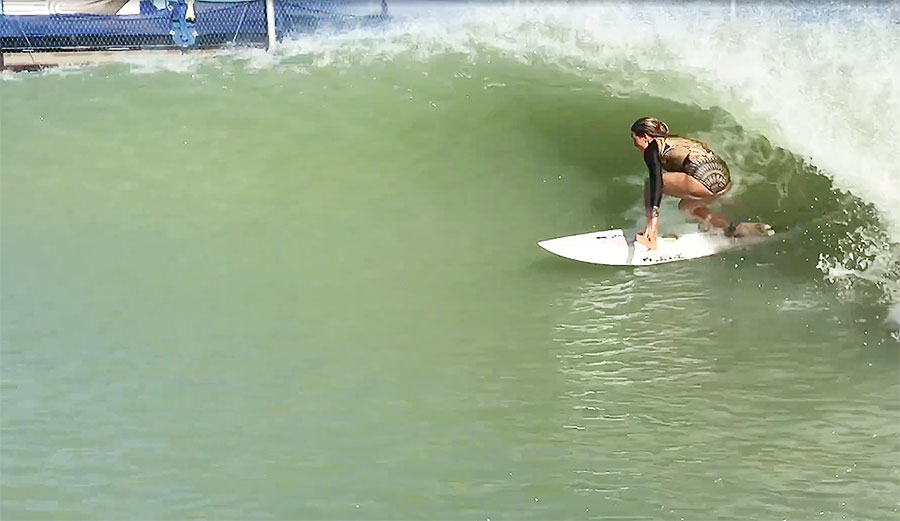 Sally Fitzgibbons training for the 2020 Olympics at Kelly Slater’s man made wave. Ladies and gentlemen, we have entered the future.

Back in January, Surfing Australia put on the first of their three-day training camps. It was held in Northern New South Wales at the Hurley Surfing Australia High Performance Centre, and it “brought together Australia’s top surfing athletes deemed most likely to be in contention for Tokyo 2020 for planning, education, and the establishment of what will be a Team Australia culture as we head to Japan.”

The CEO of Surfing Australia, Andrew Stark, is hell-bent on making sure Australia walks away with all the gold they can carry when surfing makes its debut at the 2020 Olympics either in a wave pool or in shitty waves just outside of Tokyo. “Having this extremely talented group of Australian athletes and coaches together for an extended period at the HPC has given Team Australia the perfect platform to build on,” he said after the first camp was finished. “This initial camp is just the first of many as we set our sights on success in Tokyo 2020.”

Well, now they’ve just completed their second camp, and it was held at Kelly Slater’s Surf Ranch, which is rumored to have a shot at being the Olympic venue. Owen Wright, Matt Wilkinson, Stephanie Gilmore, Sally Fitzgibbons, Bronte Macaulay, Adrian Buchan Ethan Ewing, Keely Andrew, Stuart Kennedy, Connor O’Leary, Nikki Van Dijk, and Wade Carmichael got three days of wave ranching under their belts while Bede Durbidge, the head coach, attempted to whip them into shape.

“From a coaching perspective, the benefits are astounding,” said Luke Egan, who also has a coaching role. “With the crew we have here, we are covering all bases and the amount of quality coaching you get done in only a few days is amazing. Having the ability to be on the back of the jetski giving direct feedback on a perfect wave with that repetition is crazy.”

This is the first time the WSL has opened the doors to Kelly Slater’s Surf Ranch for national teams to train, and it probably won’t be the last.

“To have three days here is so surreal, we are very lucky,” Keely Andrew told Surfing Australia. “We are so blessed to have the support of the Australian Institute of Sport and Surfing Australia behind us. I don’t think there are many other Olympic teams that have this opportunity. It’s exciting and I think it’s going to push surfing to another level.”