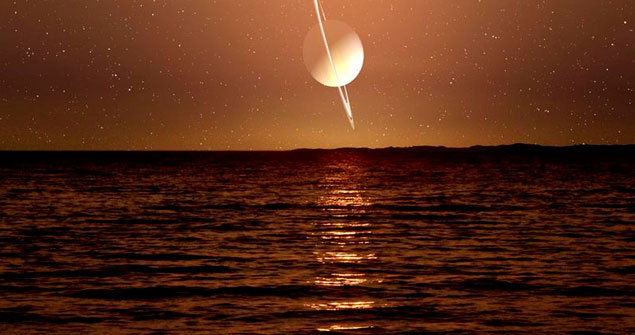 Saturn’s got waves. Well, not Saturn, exactly, but Titan, Saturn’s largest moon. And not waves, exactly. Back in 2012, NASA’s Cassini spacecraft was taking a few shots of Punga Mare, which is one of Titan’s hydrocarbon seas. That’s right: not seas made from regular old  water (which would be impossible in Saturn’s climate – not a place for vacationing humans), but from hydrocarbon compounds like methane and ethane. It rains on Titan, too, and evaporates, just like here on earth. This cycle causes the similar weather patterns including, presumably, wind. Which causes waves. We like those.

But in all those trips, Cassini had never spotted any waves ruffling the hydrocarbon seas – just endless expanses of glass-smooth liquid. Scientists initially thought that this was because hydrocarbons are thicker than our water. Titan’s seas are closer to molasses than water, and a molasses wave would require a pretty decent gust to get whipped up. But here’s where scientist’s foresight smarts come into play: while a year (the time it takes to circle the sun) on Saturn equates to twenty-nine Earth years, scientists, in all their infinite smartness, figured that as Titan moved towards spring, the wind would pick up. Well, spring sprung. And so did the waves. They think.

Cassini watched as the sun glinted off Punga Mare’s usually mirror-flat surface a few weeks ago. It glinted in a such a way that allowed for the serious speculation of space waves… not huge ones, by any means (around two centimeters), but waves just the same. Now let’s suspend our disbelief that Saturn’s environment is capable of sustaining life of some sort. With any luck, they’ve evolved to be tiny and capable of shredding methane mini-waves.

The guy that presented the findings was Jason Barnes, a planetary scientist at the University of Idaho in Moscow. As most of Titan’s bodies of water are located in the northern hemisphere, researchers are anticipating more wind – and more waves – in the next few years. As Titan’s northern hemisphere’s winter turns to spring, that space wind picks up.

Scientists are cautious, however. There’s still a chance that what Cassini is seeing isn’t actual waves, but reflections off a solid surface that just happens to be wet. Think a mudflat: has ripples and texture, doesn’t have waves.

But although there are still doubts, there are some other pretty good hints that these are waves. On another one of Saturn’s seas, Ligeia Mare, Cassini spotted a “magic island” that appeared then disappeared. A bright reflection was recorded in one of Cassini’s images, then disappeared. It hasn’t been seen since.

While the initial belief was that it was an island that swamped by either waves or tides of some sort, the team of researchers came to the conclusion that it was actually a set of waves. Good news for the Silver Surfer, anyway.