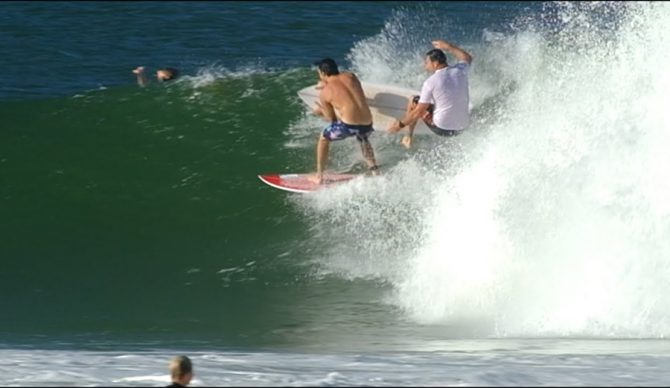 Surfing doesn’t always have to be spiritual, special, or serious. Ideally, it should be fun. Here are six examples that brought the lols. Insert your own person laughing with tears emoji where appropriate.

Mitch Parkinson “Steals” Cousin Joel’s Board at Snapper
Find us a wave ridden in 2022 that has as many shits and giggles as this wave ridden at the Superbank (above), and we’ll give you our prized mid-length. Mitch Parkinson takes off at Snapper, before being dropped in on by his elder cousin Joel. The 2012 World Champ gets barreled, twice, before Mitch catches his board in his arms and fangs down the line with the stolen loot. In the next minute and 500 yards, Mitch manages to swap boards, evade 19 longboarders, do 12 snaps, and the icing on the cake, gets dropped in on by two dolphins. If that doesn’t make you smile, you are dead behind the eyes.

The Greenroom Times has carved a niche on Instagram by successfully mashing pop culture memes with surf culture idiosyncrasies. Poking fun at the various tribes and established behaviors of surfers and pairing them with just the right clip has provided some of the more laugh-out-loud surfing posts of 2022. Yet it was this simple take on a long paddle out that perhaps best illustrated their humor.

Mason is endlessly entertaining on land or sea and seems always to be having the most fun of any surfer on the planet. This year though, on a trip to Scotland, his efforts surfing a wave solo that was 85 percent basalt was an absolute highlight. Sure, you had to watch through your fingers, and maybe it made us grimace as much as smile but once Mason exited the water unscathed and joyous, mostly you just had to laugh at the sheer audacity, bravery, and stupidity of the feat.

A summer session on the south side of Huntington was described by the filmer Dan Verner as “a full-on circus, post-COVID.” It somehow combines all the most atrocious and hilarious aspects of surfing, in just a 90-second clip. Part war, part chaos, part absurdist theatre, by the end all you have to do is start laughing. The alternative is to sob like a child who has accidentally killed their first pet.

Jack Robinson Apologetic Air at Peniche
Pro surfers and Peniche bodyboarders have history. Joel Parkinson once found himself at the center of a controversial blow-up in a freesurf session, while many other visiting surfers have felt the ire of the Supertubos locals. In this example, though, Jack Robinson takes a new approach to the age-old problem, launching and landing a massive rotor just in front of the bodyboarder who had scorched him. It was funny enough, but further elevated by Robo’s multiple apologies for his high-performance piece of theatre as he kicks out.

Luke Cederman’s Raglan Surf Report has been a consistent beam of light in an ever-darkening surfing world for a while now. Deadpan, and self-deprecating, he throws a mirror to all the varied ways in which surfing takes itself too seriously. We covered his challenge of gender stereotypes and product reviews, but it was perhaps his take on the unwritten rules of surfing, through the medium of pub drinking, that struck the bone most clean.