Taj Burrow, Mark Mathews Risk It at The Right in Pursuit of Greatest Surf Photo Ever

The goal was to snap the greatest surf shot of all time. At least that was the objective when Taj Burrow and Mark Mathews were simultaneously towed into this bomb at the notoriously treacherous West Australian wave – The Right. As you can see in the video above, they both ate it hard and, unfortunately, Mark Mathews’ eardrum ruptured, which is a very serious injury. It’s the same thing that happened to Greg Long when he nearly died at Mavericks.

Turns out the two did end up getting the shot during this session. The style of shot was originally inspired by Laurent Pujol’s innovative technique that involves taking off deeper than the subject, getting barreled with them and snapping the shot. This time, it was Mark Mathews who played the role of Pujol and Burrow was the subject.

One of the more impressive notes about this session is that Taj Burrow, a West Australia native, had never surfed there before, according to Red Bull which also claimed this could’ve been the greatest, most daring surf photo ever. He lives a three-hour drive away, yet somehow has never made the trek to one of the world’s most punishing waves. Well, after taking a solitary stab at The Right, he came away with a shot he will likely never forget. 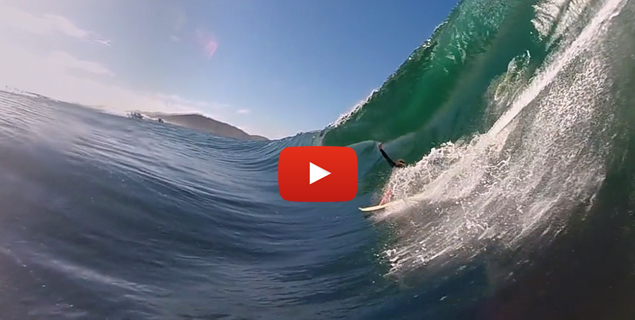