Talking With Pete Devries About the Making of Arc’teryx’s New Film, ‘Creation Theory’ 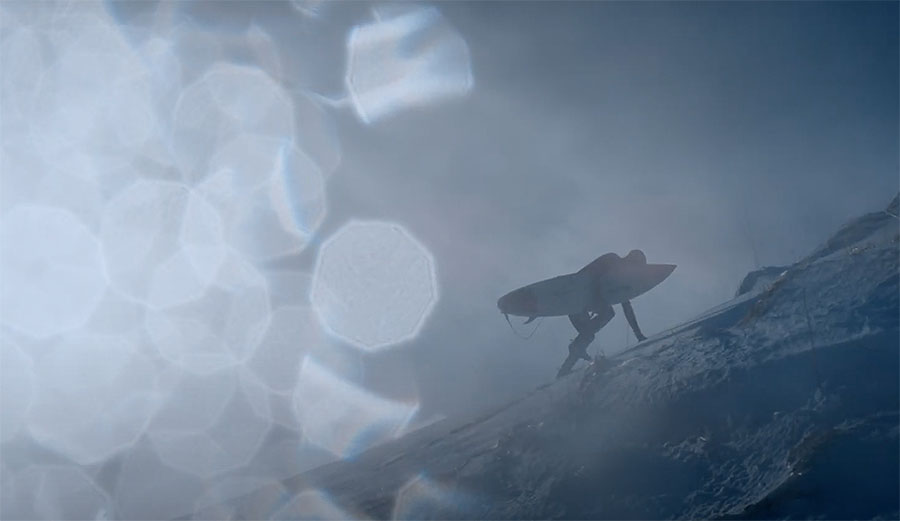 Pete Devries is no stranger to tough environments, but Iceland was probably the toughest. Photo: Creation Theory

Ben Sturgulewski is a big thinker. He’s a storyteller, first and foremost, and in the course of telling those stories, he’s become a director, cinematographer, editor, and writer. He’s worked in some of the toughest environments in the world to put what’s in his head onto a screen, and his latest film, Creation Theory, is proof that he’s one of the best in the game.

The concept behind the film is a big one. In broad strokes, Creation Theory is about where the sources behind creative expression comes from. It marries surfing, snowboarding, and music, and, much like the creative process, the making of the film was a bumpy ride.

“I’ve been fascinated by physics the last few years, and I’d been learning about the gravitational waves that sort of echo and spread out through the universe,” he told Malcolm Johnson for Arc’teryx. “Then through what I do as a filmmaker, I got interested in how the most macro levels seem to parallel the most human, micro-level moments of creating a song or looking at a wave or a mountain and seeing a line. Those are forms of creation to themselves.”

At the same time, Justin Sweeny, Arc’teryx’s Sports Marketing Specialist, had an idea to make a film about how surfing, snowboarding, and music are all connected, and the stars aligned for Creation Theory.

So Sturgulewski decided to put Pete Devries, Elena Hight, Robin Van Gyn, and musician Griff Washburn of the band Goth Babe into an untethered environment to delve into the spark of creation — and Iceland was the perfect place to do it. “It’s such a raw, powerful place that’s still being born out of the ocean,” Sturgulewski continued.

That said, I touched base with Pete Devries, a man who is no stranger to surfing in tough environments, to find out what goes into making a film with such wide-ranging ideas in such a harsh environment. And, as I suspected, it wasn’t easy.

When did this trip to Iceland take place?
Last year, in March. It was the end of winter going into spring, so it was still pretty cold there, but we had a bit of daylight to work with. In the winter, it’s tricky, because the days are so short. The days were getting longer, by like eight minutes a day or something like that.

Had you surfed in Iceland before, or was that the first time?
I’ve been there twice before, but only for short periods of time. Last time, I stopped in Iceland during filming for The Sea Wolf. There were really good waves for a couple of days. I’d also been there for a quick photo trip in the the middle of summer and there just happened to be swell. Surfing magazine sent me and a couple of other guys there. I’d never really seen the country or traveled around or done anything except for surfing, though. It was pretty cool to to check it out, for sure.

Judging from the film, it looks like the gnarliest surf trip I’ve ever seen anybody take, just in terms of weather.
It was pretty wild. A lot of those trips can kind of feel the same, but this was different. We were based in the West Fjords, and the surf crew and the snow crew would have to split up depending on if there was swell in one location and we needed to leave. Iceland is temperamental and fickle. You literally have to be willing to drive for 10 hours straight to go get waves on a different coastline. Sometimes you don’t surf at all, so we were kind of bouncing around. There was one really cool part of the trip where we took snowmobiles to stay at this old farmhouse and surfed in a nearby bay for a few days. Kind of crazy, strapping everything to the sled, going up over the pass, and then coming down into this valley covered in snow with waves at the end of it.

Did the snowboard crew [Robin Van Gyn and Elena Hight] surf with you at all?
I didn’t actually get to surf with them often. I think they had one surf when I was out at another location. They were pretty focused on the snow side of things, just trying to make sure they got as much as they could. There’s just a lot happening on a trip like that for them… You know, camera issues and avalanches and getting to the right place at the right time with the right light. 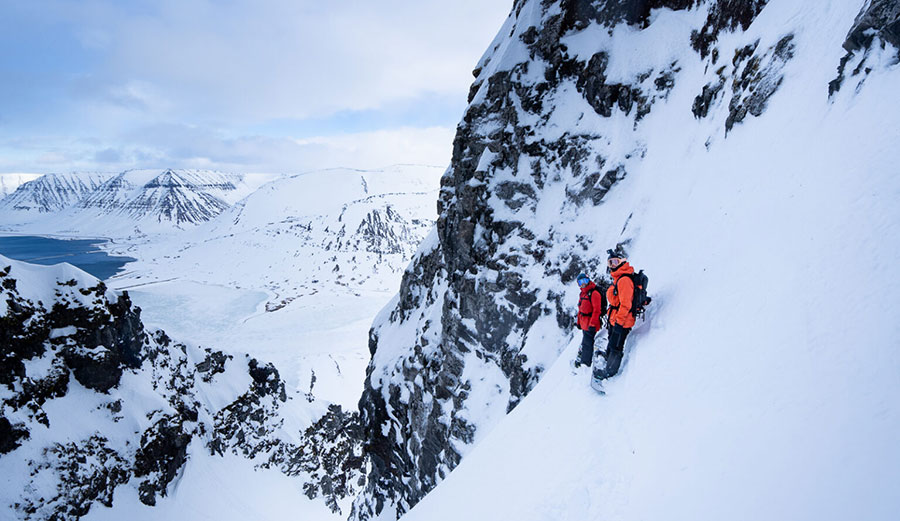 What were some of the toughest obstacles the team faced in making Creation Theory?
You know, Griff Washburn [of the band Goth Babe]… his house burned down right before the trip. We were all there at the same time and it was supposed to intertwine at the same time, but his passport burned up. On the surf side it was super mellow, but on the snow side — the amount of effort they would go through to get the right light in some hidden valley they had to hike for hours to get to — it was pretty wild seeing what they had to do just to get couple shots.

That’s something a lot of people don’t really think about: the amount of work it can be to get 10 seconds of footage.
Oh, it’s so true. You know, I think this one morning Robin and Elena woke up at like 4 a.m. to go hike for a couple of hours. It can be the same with surfing, but it felt like they put in the hard yards, that’s for sure.

What’s the area like that you were staying? Were you camping out there?
We had a few different accommodations, like Airbnb style houses. They did a camp trip while we were there up on a mountain pass. It was super, super windy. They had to build this crazy ice wall to protect themselves from the wind, but I wasn’t on that one. We picked them up when they got back. They looked a little defeated.

Was this trip one of the harshest environments you’ve had to film in?
I would say Nova Scotia in the winter is probably a little bit colder, from a surfing perspective. But I feel like you have to work a little bit harder for it in Iceland. It’s cold, but the wind is so unpredictable there, too. You look at a forecast and you think it’s going to be mellow winds, and then it just funnels through a fjord that you’re in and it’s super windy there, but calm on the other side.

How long was the whole trip?
I was there for three weeks, and I think the Robin and Elena were there for maybe 16 or 17 days. I’d say there were probably four or five super fun sessions. You’ve got your travel days in between; you might be driving for basically a full day to get somewhere to surf, and then you gotta drive back. It’s a tricky place. There’s so much coastline and so many options, so we were really lucky to have Elli Thor along with us. He’s a local photographer, and he’s kind of the guy over there who knows where to go. He’s always super keen on checking spots and seeing different zones. I felt like we really aligned well with the way we like to look at things. It was a pretty cool experience to hang out with him.

When you’re in a spot like that, on a trip that’s so full of obstacles, are you ever tempted to just say, ‘This isn’t worth it. Let me just pack it in. Let me go home.’?
Yeah, you definitely go through those moments sometimes. I can’t say it’s easy. It’s not like the waves are always perfect and you’re getting barreled all the time, that’s for sure. But there’s just something about seeing new places. That’s what gets me excited and keeps me interested. I’m always pretty keen for a mission to go look at something different or try and surf a new wave that I haven’t surfed before.

I feel like that’s got to be a big part of an athlete’s creative process — just going somewhere totally foreign, putting in the work to meet a goal.
Totally. It was interesting on this trip to see what inspires all these different types of people who are doing different things. You know, seeing how excited Robin and Elena would be. We’d be looking out the window and they’d be looking at a line they wanted to hit or a couloir they wanted to ride. For me as a surfer, I’ve never been on a trip where you’re thinking about surfing and snowboarding and trying to mix the two. It was a challenge, for sure. It’s hard even in Iceland, you know, getting good snow right down to the water and surfable waves all within a suitable scenario.

How important is it to have the backing of a brand like Arc’teryx in a massive project like Creation Theory?

Kudos to them for getting behind it. I don’t really know too much about the ins and outs, but for me, it was like, ‘Hey, we’re going to Iceland, here you go.’ I’m pretty thankful to be associated with a brand that’s willing to jump into things like this; not just trying to do things safe and cheap. This was a big, big project and definitely a lot of work went into it. It’s different than anything I’ve ever been a part of, that’s for sure.

Tune in to www.arcteryx.com on November 30th for more info on how to watch the full film.