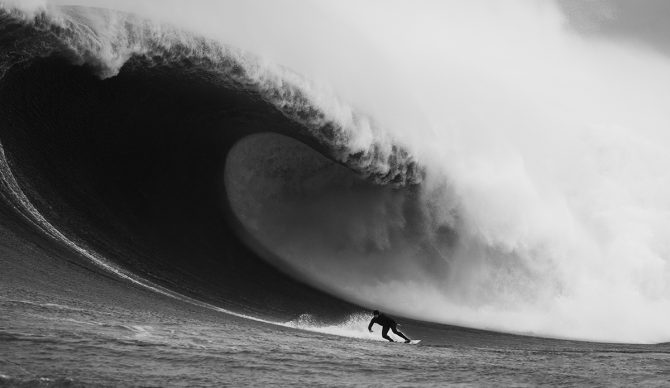 For Tanner Olthoff, getting in position to snap the shutter on this epic photo that won him the Black and White division of The Inertia’s Film & Photo Challenge was terrifying, to say the least. But everything about Maverick’s is terrifying from the dark, cold water to the ominous cliffs, and the rocky inside section. Not to mention the sharky feel of the place. And that’s before you get out to the lineup.

The day Tanner took this photo, the seas around Half Moon Bay were huge so getting out to the lineup was a serious task. “It was a strike mission,” Tanner told us. “I got laid off so I got to shoot a lot this winter. I’d been watching Maverick’s and I told myself, ‘If there’s a day this winter when it’s going to be huge, just go.’ One of my buddies in the area gave me the heads up it was going to be big.”

Tanner, who underwrites mortgage loans and is now back to being fully employed in the Oceanside area, hopped on a boat in  Half Moon Bay Harbor on January 10 for the ride of his life. “Every boat I called was completely booked so I finally got references and a seat and the captain tells me, ‘this is the kind of conditions the boat gets flipped and you can die in.'”

There was a negative low tide all day and forecasts were calling for 25-30 feet in the morning, to 45-50 feet in the afternoon. “It was like that scene out of The Wolf of Wall Street, where the boat is just falling out of the air off 10-foot faces.” They made it out as the skilled captain was able to time the swell, but Tanner had the specter of trying to make it back in all day as he shot photos.

He was able to settle in and got lucky on the timing with the gem (above), especially with all the traffic in the channel. “We were out there an hour before anyone paddled in and  Zach Wormhoudt got this one towing,” Tanner says. “We were in the right spot. There was a ton of people out there but this is the one really clean photo with nothing else besides the wave and the surfer.”

It was a day of days. But Tanner and the crew still had to get back in, which was gnarlier than coming out.

“There were three tourists on the boat that didn’t know much about surfing but the captain was such a badass,” he says. “The channel was completely closed out when we were trying to get back in. He had a deckhand looking out the back where there were still 20-25 foot walls, letting him know when there was a lull. He darted in but we actually got spun around in the whitewater. He got us turned around and at max speed again. It was insanely choppy with things falling in the cabin, backpacks on the floor. It was crazy. It was the most scared I’ve been on a boat.”

While The Inertia audience had no idea about the lengths it took to get the photo, they were no less impressed, voting the 25-year-old self-taught photographer’s black and white the best amongst hundreds of entries.

“I was surprised because I just submitted that one photo,” he says. “I’ve submitted some stuff before (to contests) but never heard much back. To have one make it all the way to the end and win based on votes, The Inertia editorial team, and Zak Noyle’s recommendation, that was pretty sick.”

Editor’s Note: We would like to thank every photographer and filmmaker that submitted entries to The Inertia’s Film&Photo Challenge. We were humbled by the quality, and the quantity, of the work submitted. Thanks to our partner, White Claw, for helping to make it all happen.