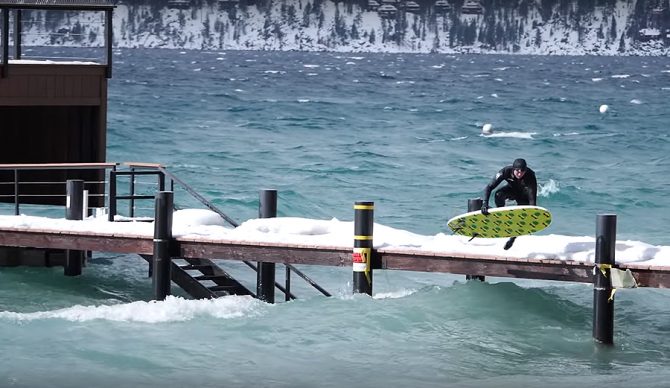 The VYRL line is a serious step up for the New Jersey brand. Photo: Screengrab

Surfing Oregon’s northern coast isn’t something you talk about much. First, it’s not that inviting. You’re mostly trying to find a rock wall to block the elements, and hoping the swell period isn’t too short and the wind’s clocked the right direction. You use rips a lot­–both to get out and to break up the swell. Tell someone you’re surfing Oregon who doesn’t surf and they’ll definitely call you crazy. It’s lonesome and uncrowded, but not lonely. And I find myself there often these days.

The locals don’t like to talk about it either (or like you to talk about it). But truth be told, like any surf locale located further away from the equator, you kind of have to live there to catch it perfect. And, even though some would argue with me about August longboard days, you ALWAYS have to wear a 5/4. Even if you can pull the hood down on beautiful sunny afternoons in late summer, the neck protection is key (note that I am a complete cold water weenie, too). 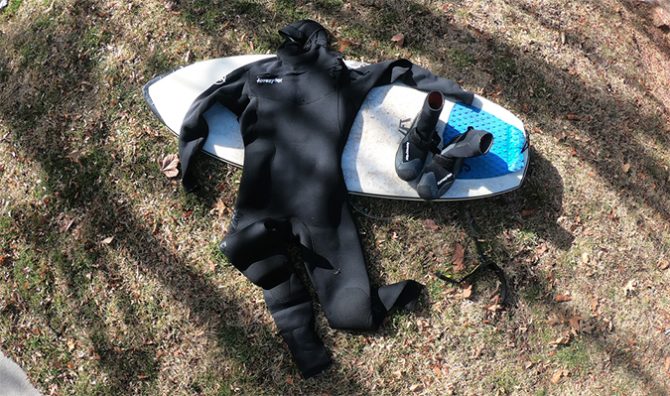 So I run through a lot of suits of the 5/4 variety. And having watched Ben Gravy lately–perhaps surf’s greatest everyman athlete ever–I thought I’d give his 5/4 a test, the Hyperflex VYRL, part of the brand’s new line of cold water suits.

I’m not pocketing hot cash to review it, nor am I worried Hyperflex will want the suit back (trust me, that’s guaranteed after I’ve stuffed my manimal body into it), so here’s what I thought:

I’ve worn quite a few Hyperflex suits over the years and one thing has stood out: over-design. Just too much of everything from color to material to branding. But not this suit. The VYRL line is an impressive change–it’s all black except for a Hyperflex logo on the chest and shoulder and a VYRL print on the arm (you can also get a black with gray chest option).

The material is extremely stretchy and lightweight. It almost feels as if it’s going to be too thin. If you’ve used 5/4’s, you know how much of a workout they can be to get on and off. You often look like an orangutan stuck in a spider web in the carpark. The VYRL is insanely easy to slip in and out of. Hyperflex credits that to the Quantum Foam neoprene, with “infused cells in the foam strata.” I don’t know exactly what that means other than it feels thinner than it is and is extremely easy to maneuver in. 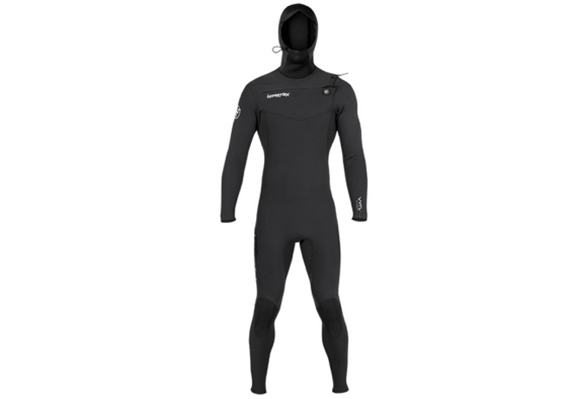 “It’s super stretchy,” Ben told me, as we texted back and forth. “It feels really light weight in the water but seriously keeps me warm for hours while surfing cold water at home in New Jersey. I just wore it while surfing Lake Tahoe in the snow.”

The VYRL also has this cool inner lining and the entry point opens up like a second suit as you slip into it (they call it the Cocoon entry point). It’s kind of over-the-top comfy (see warm)–the inner lining is called, “AQ Micro Fleece Interior Lining,” in Hyperflex language. It’s like having a soft blanket on your chest and back and it keeps your core super toasty. The suit also has a minimal-seam design and taped ankles to minimize water coming in and out.

Okay, so here’s what could happen with this suit: being as thin and lightweight as it is, I could see it wearing down. I’ve had it in the water at least five times and in extremely rough elements (I had one wind and rain squall that sent sprinting up the trail to the car) and haven’t seen any wear. Plus at its price ($229), you could literally buy two for the cost of any other single suit in the industry. And you wouldn’t be bummed having a spare.

What’s a 5/4 Hoodie without boots? Hyperflex also deals in plenty of those and I paired the VYRL suit with these simply-designed booties. The Round Nose are offered in 3mm, 5mm, and 7 mm (I used the five). Two things are really important here: Flexibility, which this boot has in spades, and warmth, which the Round Nose boasts because of thick neoprene and a soft, microfleece thermal lining. The seams are double glued and “blind stitched,” with a “single needle,” to avoid the holes of normal stitching, thus creating places for water to seep in (not what you want). Warm, comfy, the Round Nose may wear down over time, but what bootie doesn’t if you’re using it right? 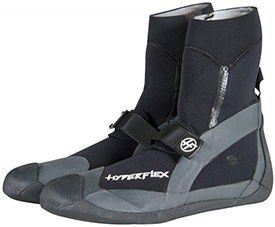