The 5 Stages Of A Wipeout 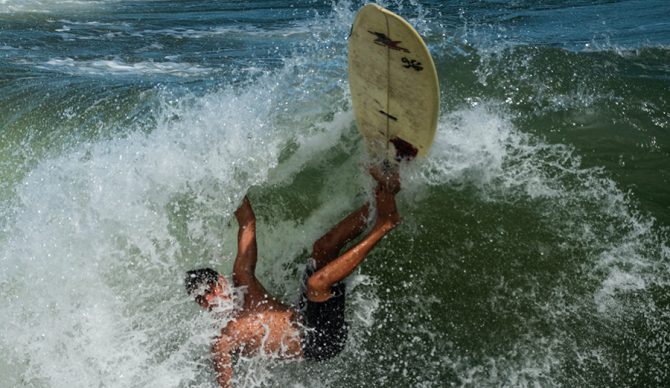 If you ain’t fallin’, you ain’t tryin’. Photo: Kurt Anderson//Unsplash

The best part about surfing is you can always invent new ways to fail. The steps to success are well documented, but said steps are littered with banana peels. It’s like the ocean is infested with cartoon monkeys. All I want to do is one clean snap, but Magilla Gorilla over here wants me to slip on the takeoff and somehow get catapulted into a different zip code. They always tell you to never turn your back on the ocean, but they never tell you it’s because the ocean is an expert in prop comedy.

But that feeling of failure – of being smacked around by the sea and reduced to a toothless sea guppy flushed down a toilet – is always the same. Becoming a more experienced surfer more or less means putting up with your own incompetence long enough to reap some benefit from it. But it also means you stuck around long enough to be able to identify points of failure quicker. This leads to feeling even worse about being unable to sidestep whatever Acme-branded anvil the ocean throws at you, because you know exactly how to avoid it, but get clonked on the head anyway.

Whenever I’m trapped in one of those moments where I zigged when I should have zagged and I know I’m about to come face to face with San Diego’s finest bottom-dwelling creatures, I wheel through the same familiar emotions. The whole process of getting chucked into the air, driven underwater, and churned around six feet beneath the surface might only last a few seconds, but that’s still enough time for my brain to cycle through the following stages:

Denial – I’m the world’s most delightfully mediocre surfer. If there was a mediocre pro surf tour – The Medio-Core Tour – I would surely be a part of it. I would not win a single contest but would be a constant fixture in every event. The Wade Carmichael of the Medio-Core Tour.

It is then impossible for someone like me, with my average abilities and above-average balance, to be doing forced summersaults underwater due to surfing-related reasons. This is clearly a setup.

Well, at least I’m not getting dragged along the ocean floor.

Anger – God damnit. The wave is dragging me along the ocean floor. But, oh – hey, look! There’s a horseshoe crab down here with me. So cool!

Oh – wait – it’s laughing at me. That prehistoric asshole. Whatever, bro. Learn to evolve, then we’ll talk.

Bargaining – Look, nature, work with me here. What direction can I swim in? Up is preferable, but considering I’ve spent what feels like twenty minutes in an underwater mosh pit, I’m no longer in a position to tell you what properly constitutes “up.” Down is bad for obvious reasons, so let’s try to avoid that one. Maybe if I swim sideways a bit, you will let me come back up to the surface?

If you let me breathe again, I promise I’ll try to be a better surfer. We both know I won’t actually become a better surfer, but I will do my best to stop surfing waves like an arthritic giraffe.

My Brain: You did it again, didn’t you?

My Brain: And where are we AGAIN? That’s right, we’re flailing around on the ocean floor with a horseshoe crab laughing at us because Brody Big Britches over here thought he was Dane Reynolds. Pathetic.

I could have been anything, you know – a doctor, a scientist, a high-powered lawyer with an awful taste in suits – but instead, I’m stuck inside the skull bone of a lame surfer. I can’t wait to retire in a jar of formaldehyde.

It’s usually around this time that I resurface, confirm both bones and board are accounted for, and begin the paddle out once more. To be a surfer, you must either be a glutton for both physical and emotional pain or have the memory of a starfish, because this cycle is guaranteed to happen again.