The A-Train to Rockaway 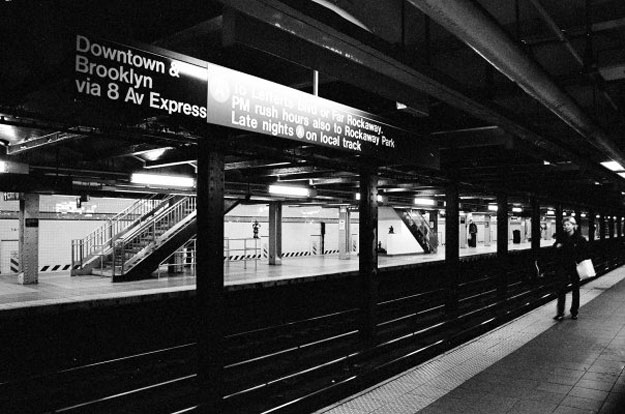 The November Barack Obama was elected President of the United States of America there was a black man singing the blues on the A-train downtown. His hair was braided and pulled back in a ponytail. He held a brown paper bag lightly filled with change that he shook from time to time. Bowing at the waist, he held one hand out towards his reluctant audience, thumb and index finger pressed gently together, and his song was all about being alone in the world.

‘Ladies and gentlemen,’ the man said when he was through singing, ‘that there was a song by the legendary Sam Cooke. Ladies and gentleman, right now as we travel on this train, a change is coming, a change is coming to America. I want to tell you something. Every day you open your eyes, consider it a blessing. Consider it a blessing because it means that you have been given one more chance, one more chance to get it right. Thank you, ladies and gentleman,’ the man said. ‘Thank you for listening.’ No-one applauded, or said anything, no-one put any money in the paper bag and the man stood there at the far end of the carriage.

The A train to Far Rockaway, Beach 90th Street, Queens, New York is hardly the place where a journey to attempt to surf some of the biggest waves in the world should begin. While it harbors a robust surfing community, Rockaway serves up at best, and very occasionally, four to six footers from the frigid Atlantic abutting. Nevertheless, the spot has held a fascination for me ever since reading an article in a surf magazine about the scene down there. It was illustrated by grainy, black-and-white images of locals caked head to foot in rubber and slipping through snow-covered sand to get to the water. I was captivated.

Already during my stay then in New York, the area had drawn the attention of the New York Times. Under the headline ‘From the Streets to the Libraries’, an article detailed how the Queens Public Library had become the highest-circulation public library system in the United States, driven by so-called urban fiction, also dubbed street or ‘gangsta’ lit. ‘In one book,’ I read in the Times, ‘the hero spirals toward a violent death dealing drugs on the streets of Laurelton, witnessing, along the way, a baby ripped apart by bullets. In another, a convict plots the seduction of his prison psychotherapist’.

A profile in the Times arts section a few days later gave voice to one Robert Sarnoff, an accidental documentary film-maker who, much to his surprise, won Best Docudrama at the Bare Bones Film Festival in Oklahoma for his film No Rooms Lobby, inspired by the Baxter Hotel, the Beach 99th, 150-dollar-a-week Single Room Occupancy. Of Rockaway, Mr. Sarnoff says: ‘There’s an artistic part of me that sees it as beautiful – even in, in some sense, the ugliness.’

As I pull my gear together in the East Side apartment of my hosts, preparing to head out for a look myself, my bud, Fred, says to me, ‘Put a few quarters in your wetsuit. If your stuff gets stolen, you’ll be able to call us.’ There is other advice: ‘Are you sure you want to take your camera?’ And: ‘Don’t stay in the water too long, I’ve got visions of us having to call around to the hospitals in Queens asking if they’ve admitted any hypothermia cases.’ They might have had to call around to the psychiatric hospitals and ask instead about nut cases, if the stares I encounter, surfboard underarm on the Subway, are anything to go by.

At Broad Channels I alight and look quickly left and right for hails of bullets, and then change tracks for the shuttle train to Beach 90th Street, crossing paths with a figure carrying a skateboard and sporting Oakley Frogskins. He wants to know how to get to the beach and I suppose I look the part for the asking. I have only a sketchy idea – I looked up the route on a subway map. ‘Here for the shuttle?’ I ask confirmation of an old man wearing a faded blue hoodie and those welding goggles old people like to wear instead of Frogskins. ‘Yeah, what does it look like?’ the old man says.

My traveling companion, I soon discover, is named Paul Fuguet, recently disembarked from Chile. He falls in step and I show him the way to the beach. He tells me he is an artist and a ‘very good surfer’ and that he has left Chile to make it as an artist in New York City. ‘You cannot make surfing everything in your life,’ he advises as if he suspects I might harbor the tendency.

Later, after I’ve surfed a few of the good rights slicing off the rocky groyne dissecting the beach, I notice Paul Fuguet amongst a group of local-looking surfers on the beach. Stripping down to his boxers, he hefts up a longboard, walks out along the rocks, paddles out and catches a wave. He stands out somewhat from the rest of the crowd, being as they are, rubberised. He’s quite a sight in his white underpants, skinny bones and winter skin, but there’s something else too that sets him apart: he IS a good surfer, like he said.