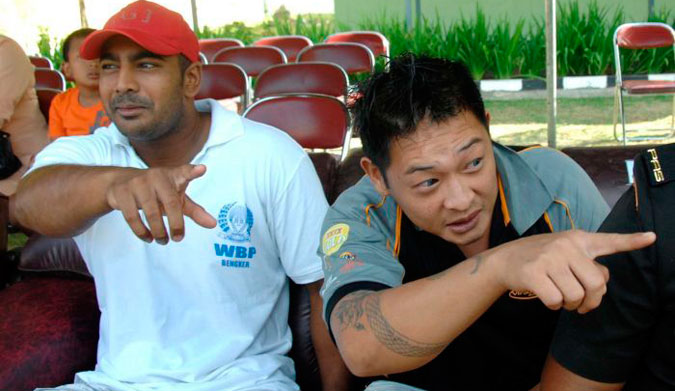 For ten years, the governments of Australia and Indonesia have played tug of war over the lives of nine Australians convicted of smuggling 18 pounds of heroin out of Bali. With two members of the Bali Nine being executed by firing squads just a few days ago, there are far too many layers to the decade-long saga to tell just one story today.

In 2005, the members of the now-named Bali 9 were arrested in Denpasar Airport. The ringleaders, two Australians named Andrew Chan and Myuran Sukumaran, were sentenced to death by firing squad in 2006. And now, after a decade in prison, the sentence was carried out.

A main reason the story made its way into the spotlight since the nine were arrested in 2005 comes from the narratives of “ringleaders” Andrew Chan and Myuran Sukumaran having changed their lives from inside prison walls. Chan became known for organizing church services and mentoring other prisoners. Sukumaran took to painting both for therapy and a voice. He made an Indonesian flag covered in blood and even painted a portrait of Indonesian President Joko Widodo with the inscription “people can change.” They became such a positive influence to others that the prison governor testified in court that their death penalties should be reduced to a more lenient sentence. Meanwhile, in Australia, where the death penalty doesn’t exist, government officials and citizens alike rallied and cried for leniency. Widodo didn’t budge. And Australian Prime Minister Tony Abott announced his country’s ambassadors will withdraw from consultations in Indonesia once the bodies of Chan and Sukumaran return home.

It all raises so many issues beyond just the debate of whether you support capital punishment or not. Today, thirty-two of fifty states in the United States employ the death penalty in cases of aggravated murder. Most executions are done by lethal injection. Does that make it any less “barbaric?” And when does punishment boil down to redemption, and when does it effectively rehabilitate? Australians, at least on a state level, don’t believe in capital punishment to any extent. Meanwhile, the Indonesian government has been put under intense scrutiny for enforcing their own laws against what they believe to be a severe domestic problem. So who is right? Who is wrong? Or maybe the better question is who has the right? Who is ultimately responsible? (Obvious answer: the guys smuggling $4 million+ worth of Heroin)? If Australian law enforcement had stopped the Bali 9 before leaving for Bali, they’d be punished and serving time in their home country. If, if, if…

The application to the surf community is obvious, as anything having to do with Bali is essentially “local news” for us all. Relevant and of interest to us all, even if has nothing to do with surfing. It’s a top 5 destination our bucket lists, and by all accounts I’ve been given, it is a universe away from my own life in Southern California in every way. The more I read about the Bali 9, the more I learn about them in network newscasts, the less I narrow in on answering any of the above questions. Am I my brother’s keeper? Or to each his own?