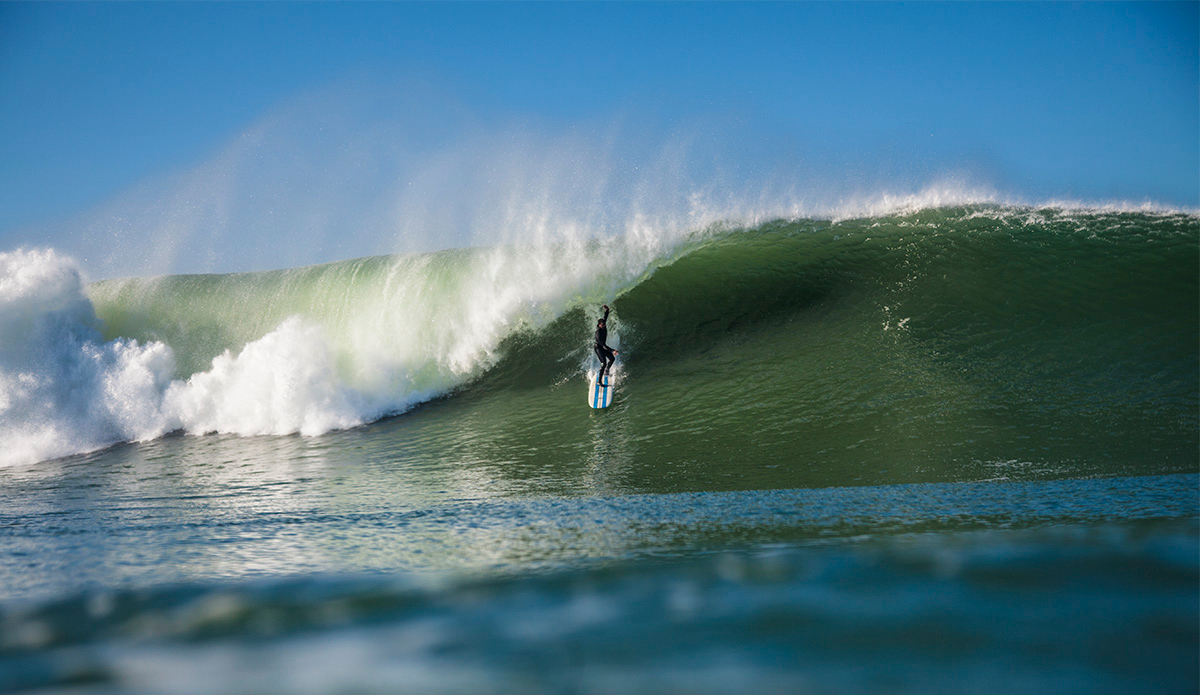 January 23, 2015 | I didn’t know who Kieran Cox was until he fortunately found me on Facebook and identified himself, “unless there happens to be another black surfer on a big board with dual blue stripes...” Nope. Kieran (who is 6’4” to put this wave in perspective) you are one of a kind. Photo: Sachi Cunningham 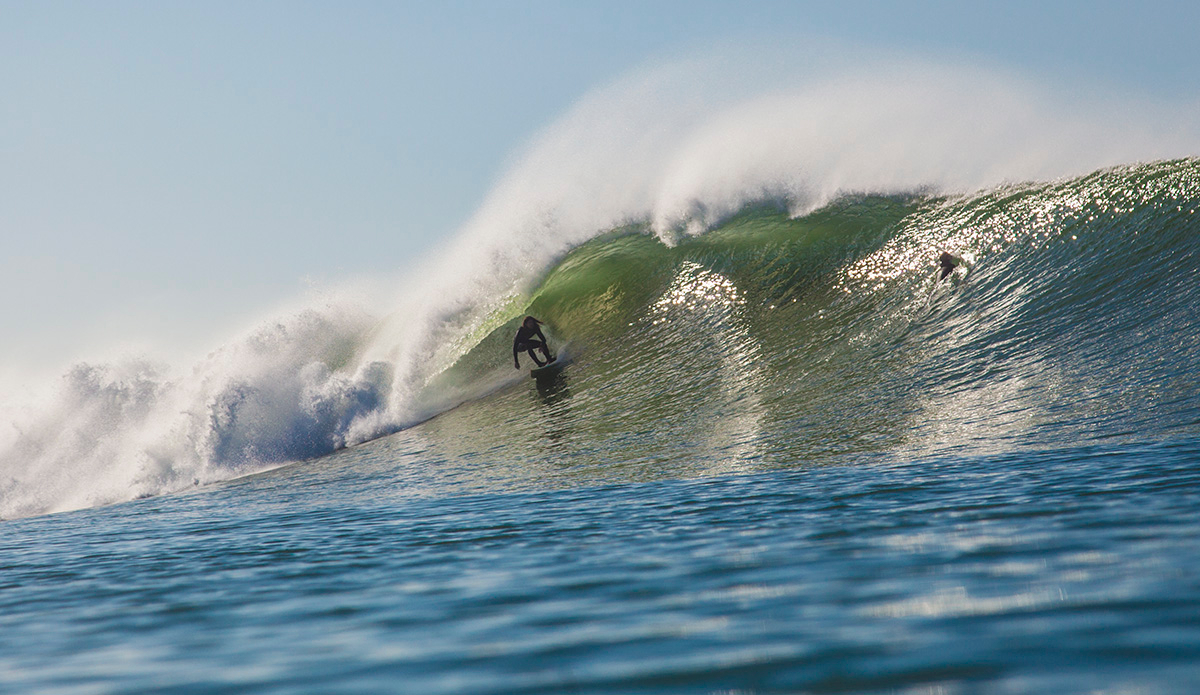 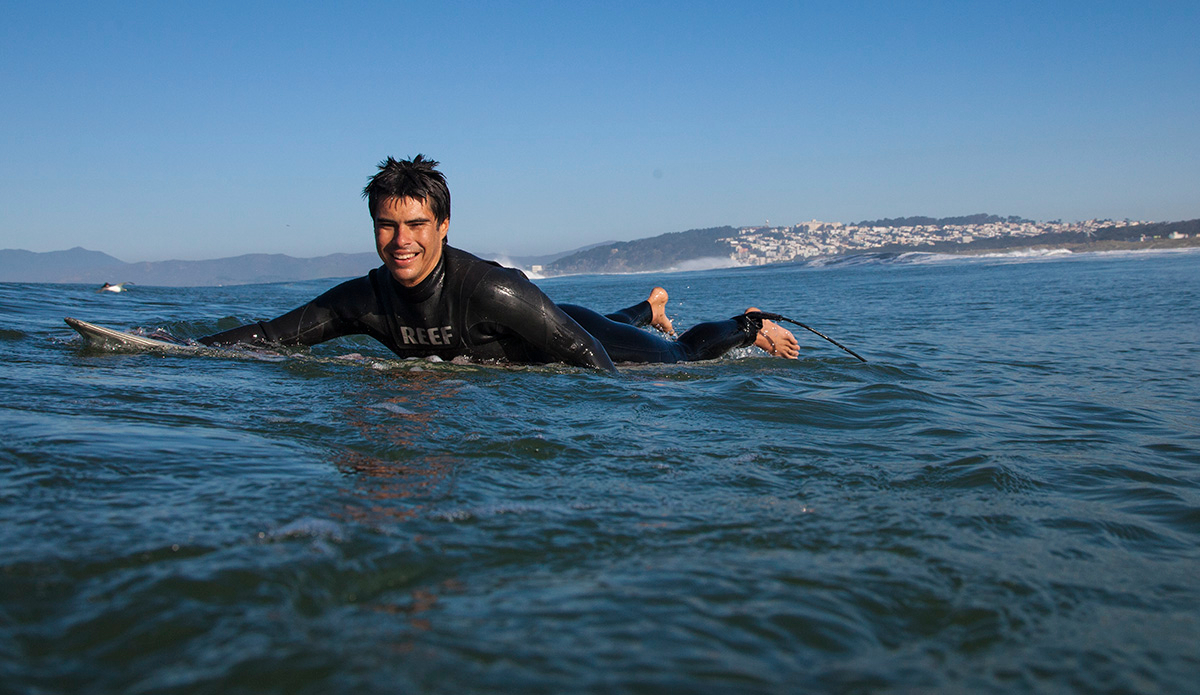 January 24, 2015 | Cyrus Sutton was one of the many surf celebs visiting from down South here for the swell and Thomas Campbell’s show later that night in Santa Cruz. I have always admired Cyrus’s film work since meeting him in Tavarua over a decade ago. He proved his big wave surfing chops big time on this swell. Photo: Sachi Cunningham 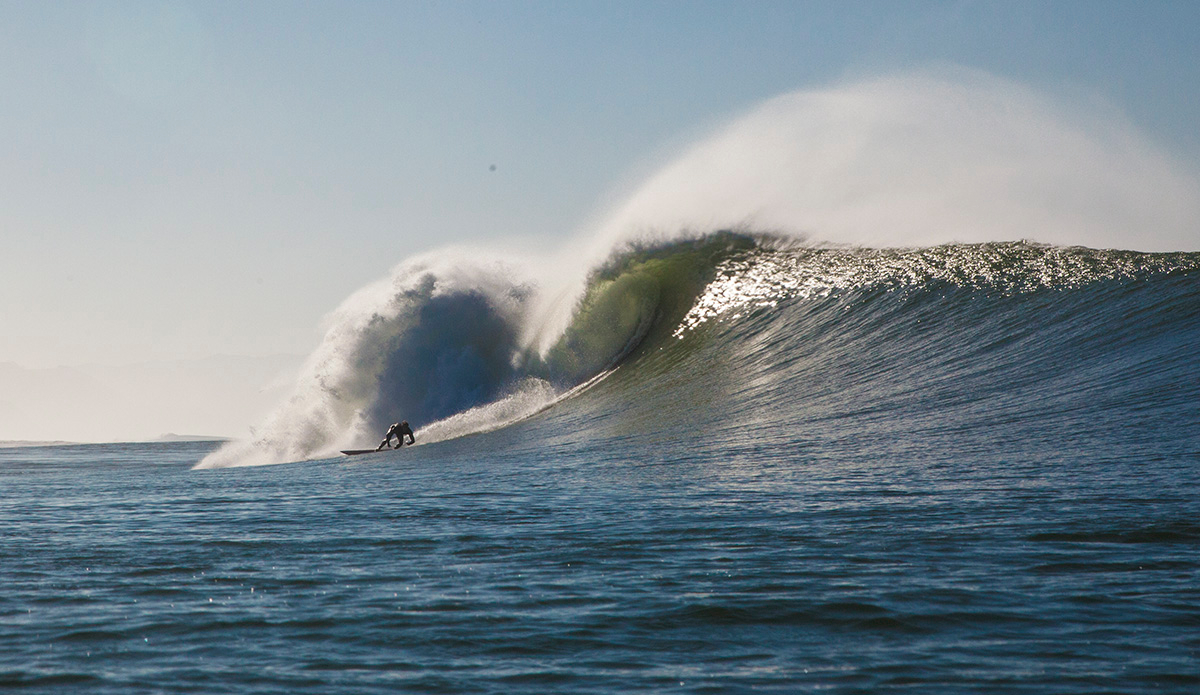 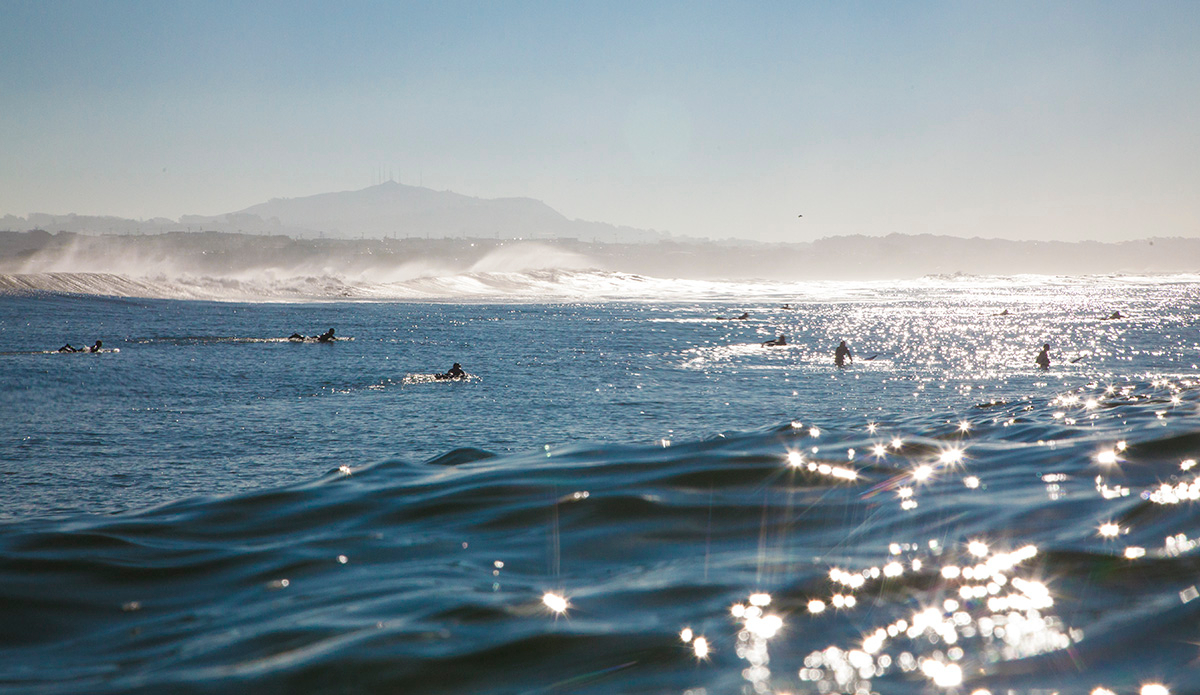 January 24, 2015 | There were a shocking number of surfers in the water for a swell this size. The numbers personally made me feel safer and gave me more opportunities to get a few shots, but I know all of the big wave guns and pros in the water frustrated some of the locals. Photo: Sachi Cunningham 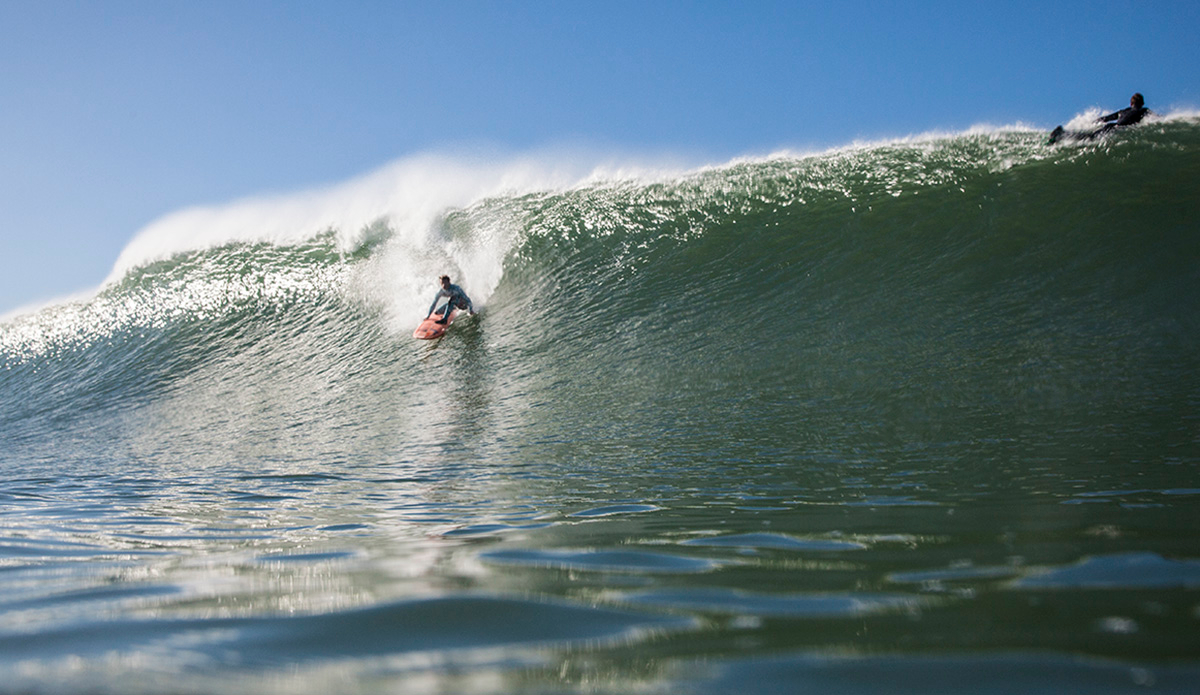 January 24, 2015 | There were several Titans who chose to surf the beach rather than Mavericks this day, including BWWT Punta Galea champ Nic Lamb. Photo: Sachi Cunningham 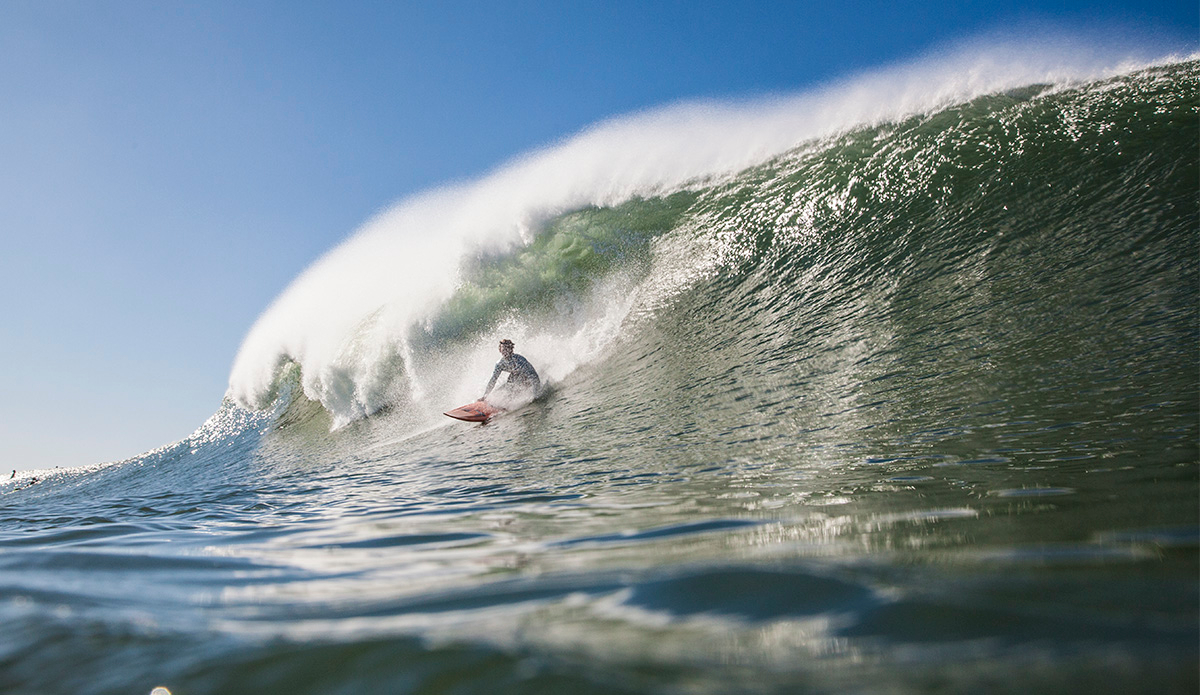 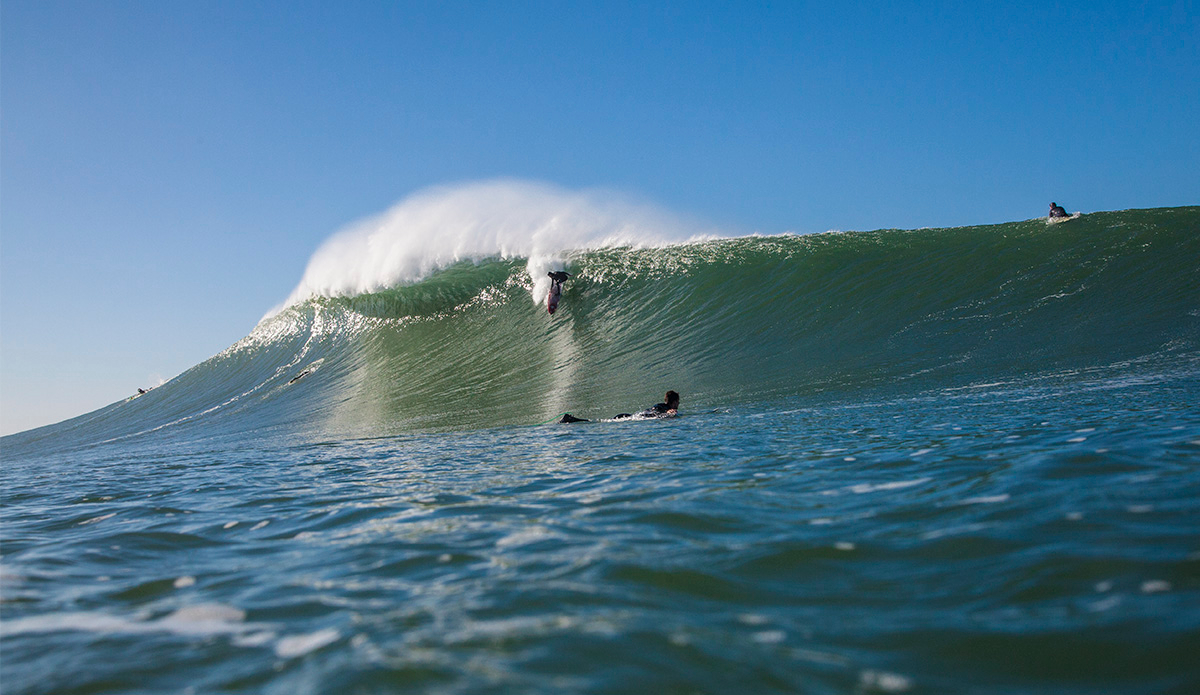 January 25, 2015 | Great Highway resident and family man Johnny Bowling injured himself during the first swell of the season, but he didn’t let the permanent knee brace he has to wear pre surgery hold him back from dropping in steep and deep. Photo: Sachi Cunningham 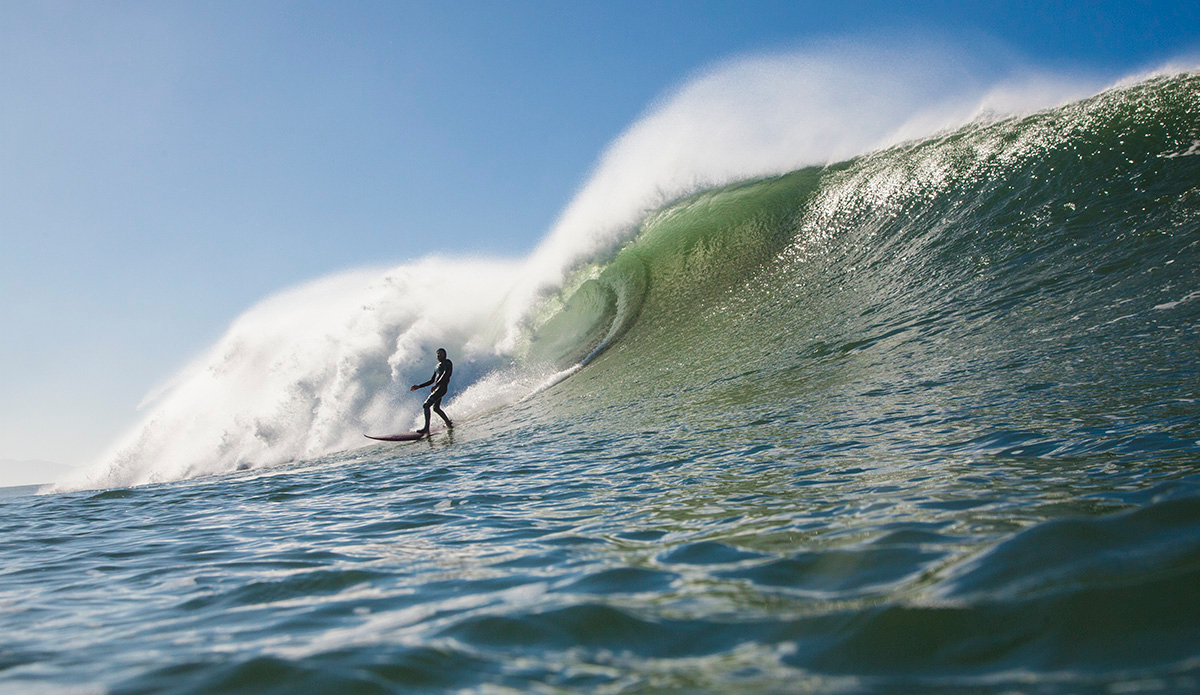 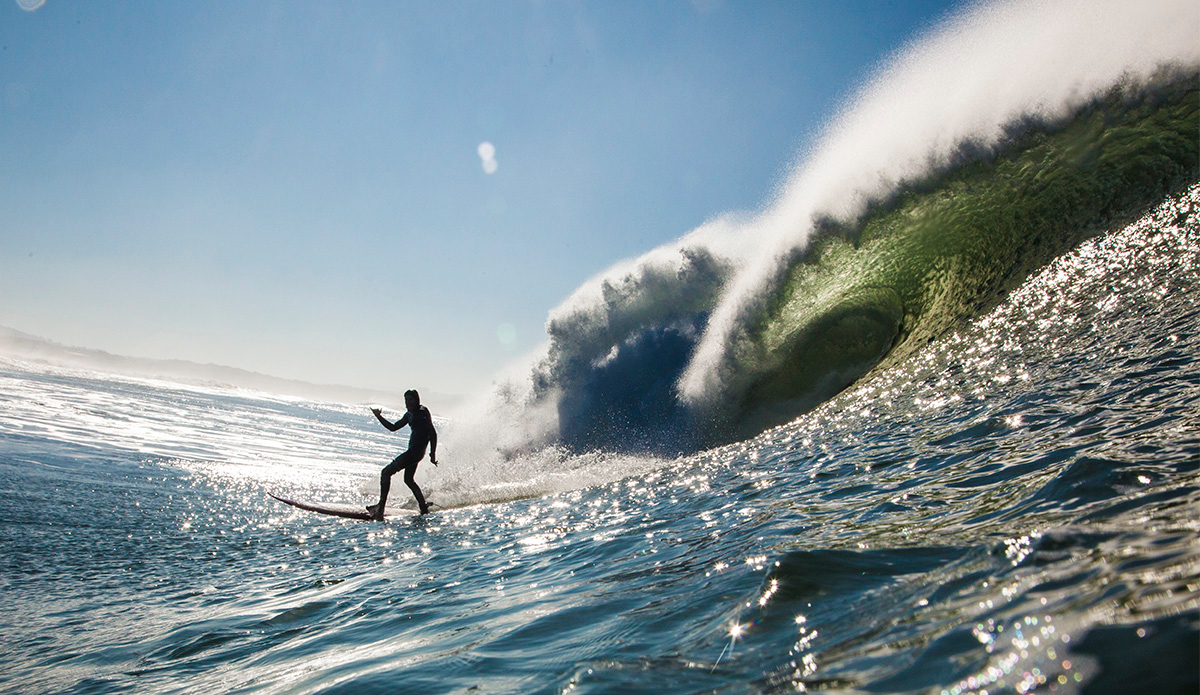 January 25, 2015 | Johnny Bowling takes a break out of his ride to give me a shaka. Photo: Sachi Cunningham 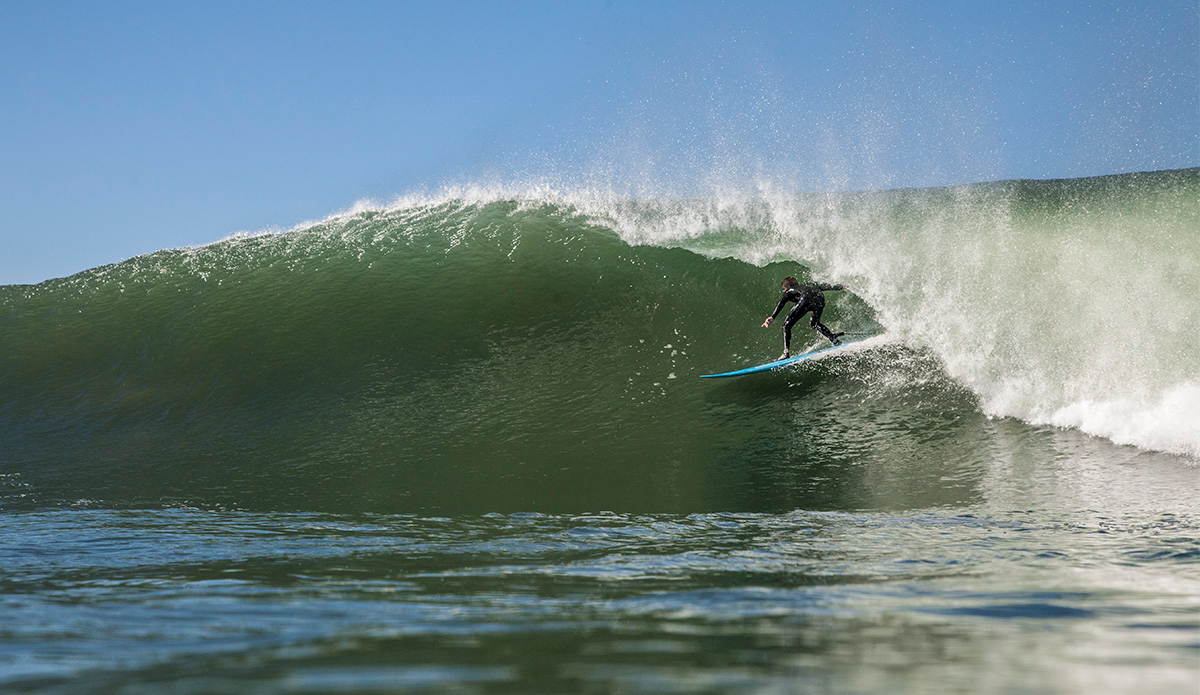 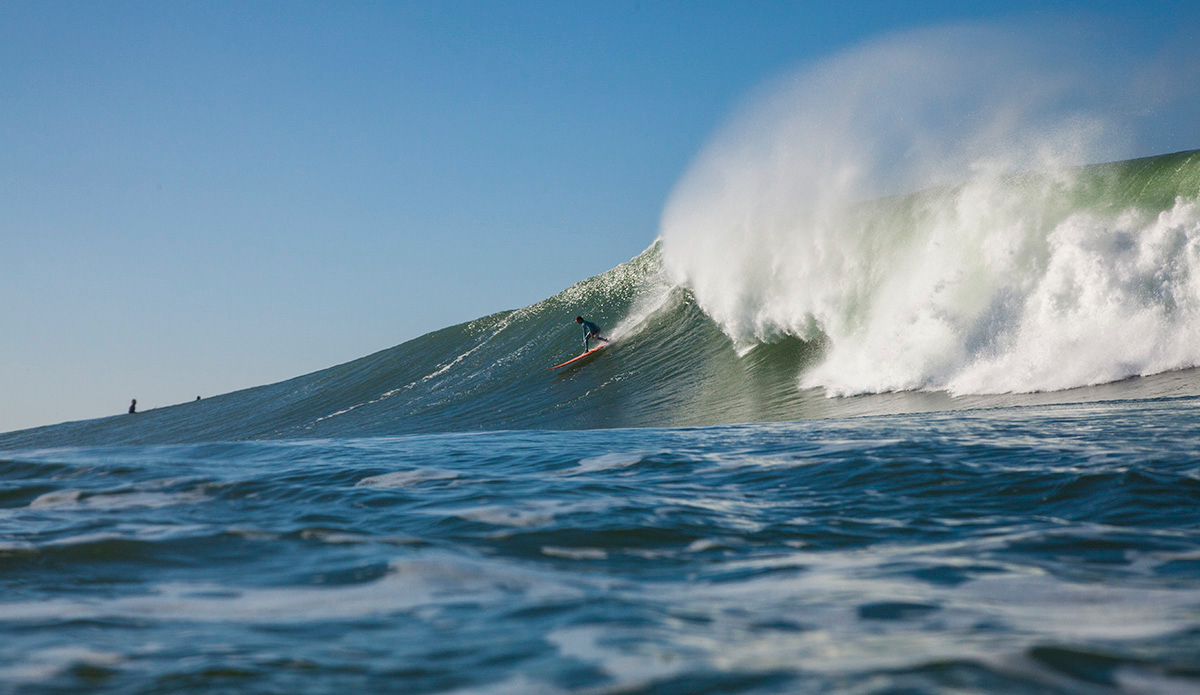 January 25, 2015 | I don’t think the size of this wave that Nic Lamb is riding here really sunk in until I saw this photo. I was able to dive deep enough before snapping this shot to avoid too much turbulence. Photo: Sachi Cunningham 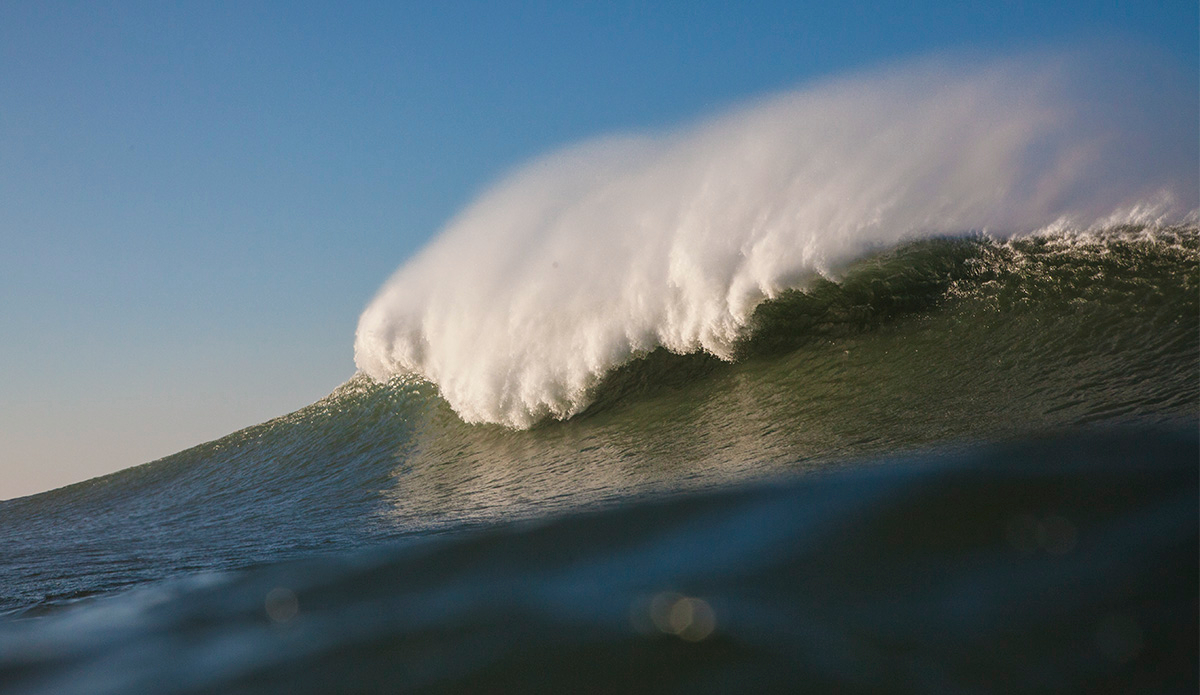 January 26, 2015 | The offshore winds got even stronger on the third day of the swell. Photo: Sachi Cunningham 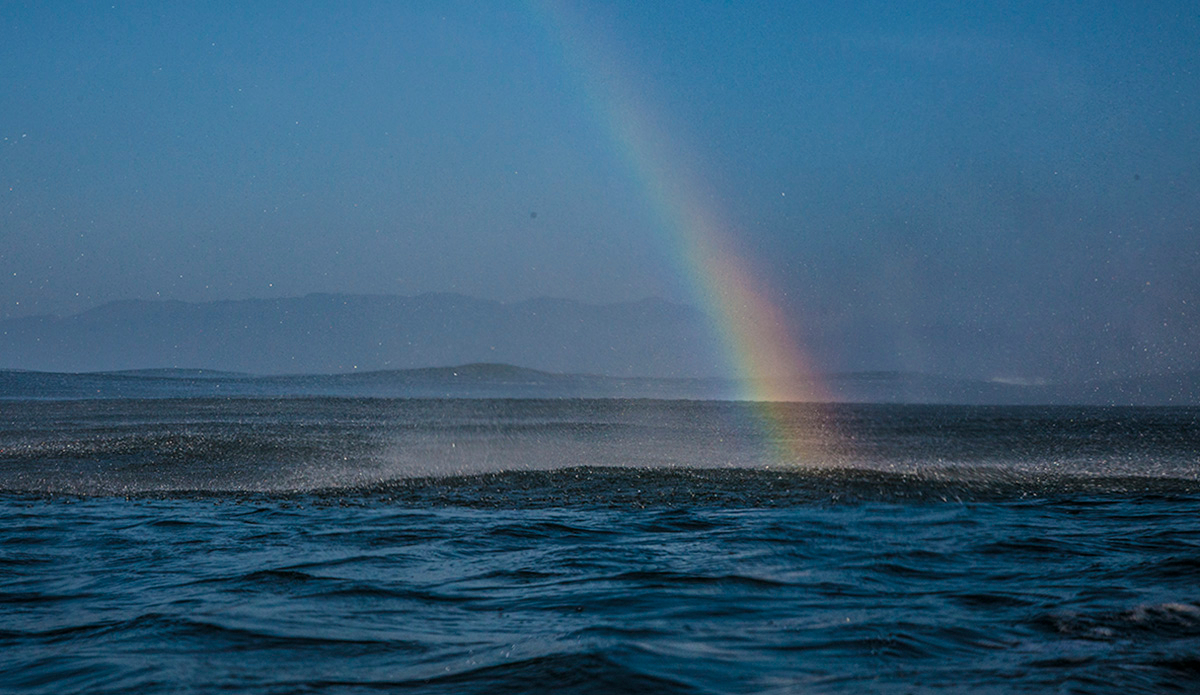 January 26, 2015 | Almost every wave produced a full rainbow with the spray produced by the strong offshore winds. Photo: Sachi Cunningham 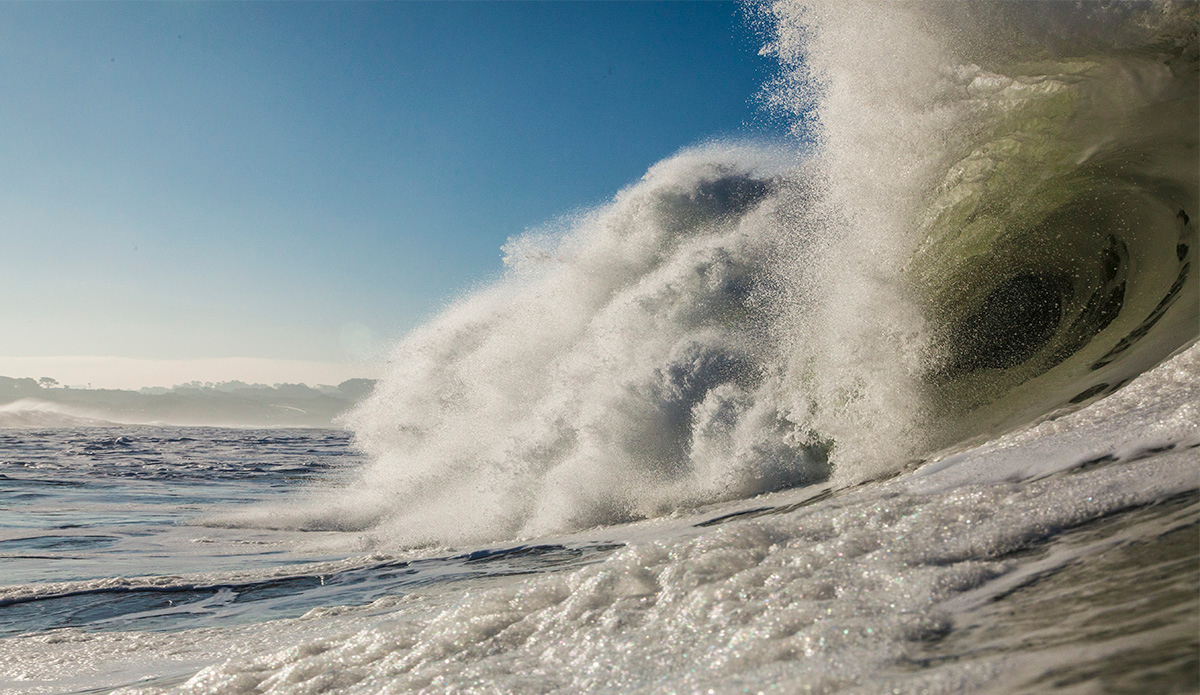 January 26, 2015 | One of the many empty foam balls that went unridden over the weekend. Photo: Sachi Cunningham 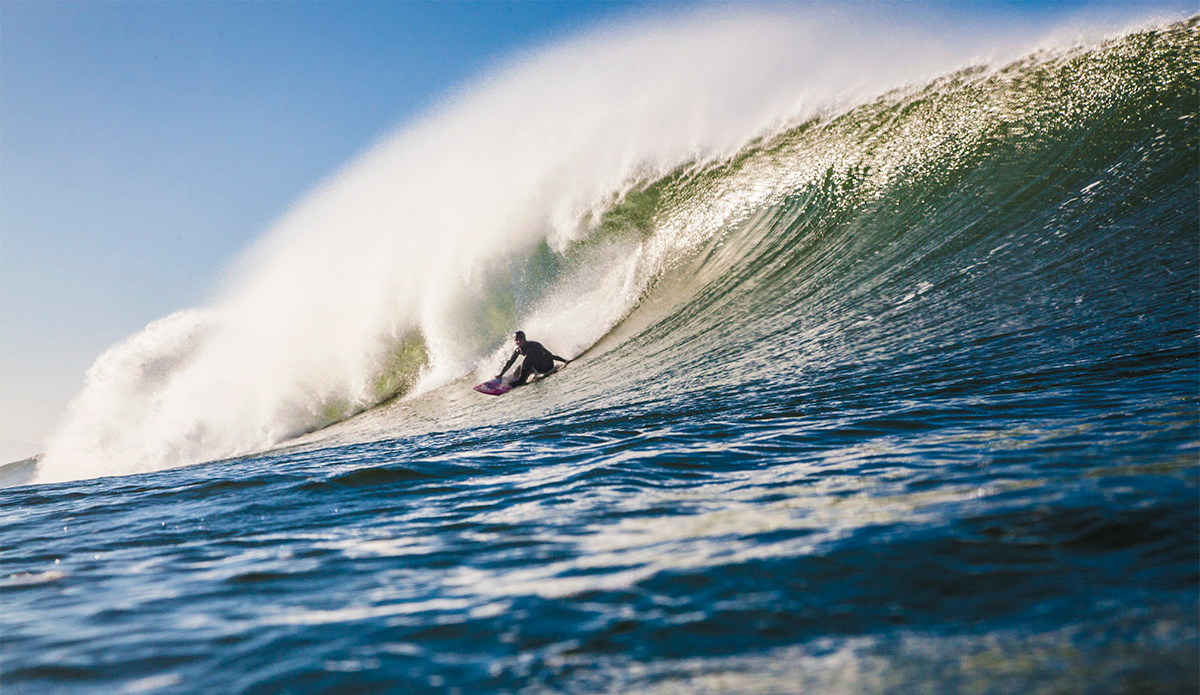 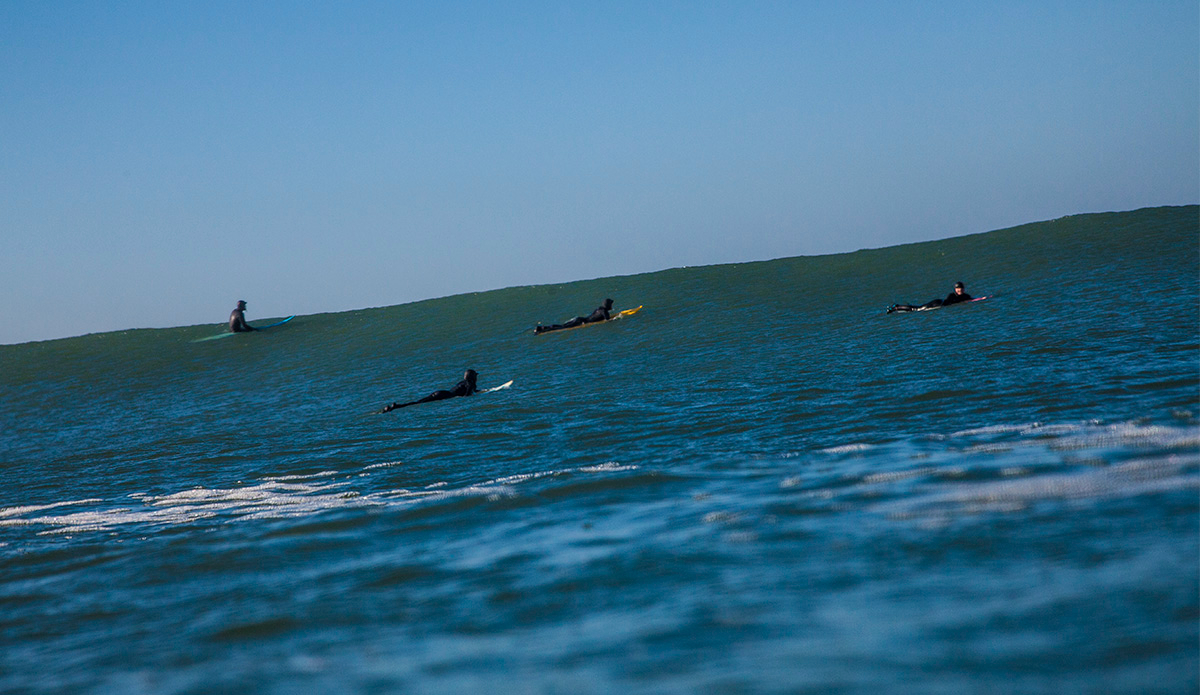 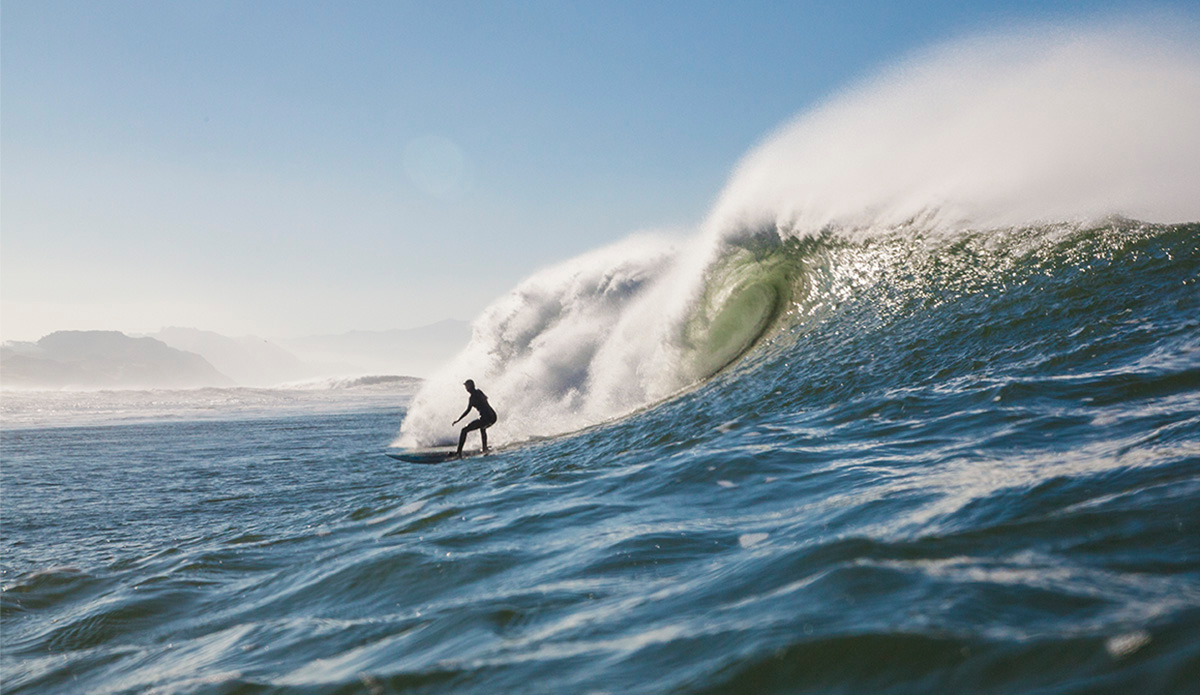 January 26, 2015 | Mother of two boys under the age of three, Sarah Martins shows that Maverick’s Titan Alex Martins (her husband) isn’t the only one who tackles big waves in the house. Photo: Sachi Cunningham 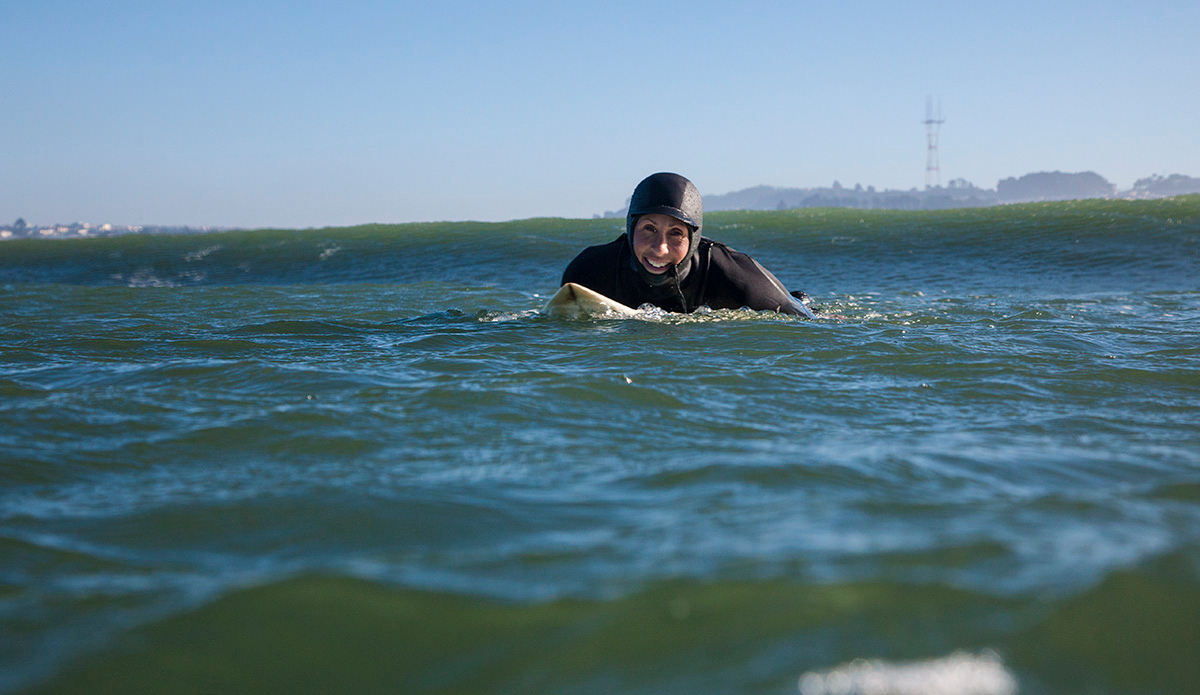 January 26, 2015 | Sarah Martins is all smiles paddling back into the lineup after a great ride. Photo: Sachi Cunningham 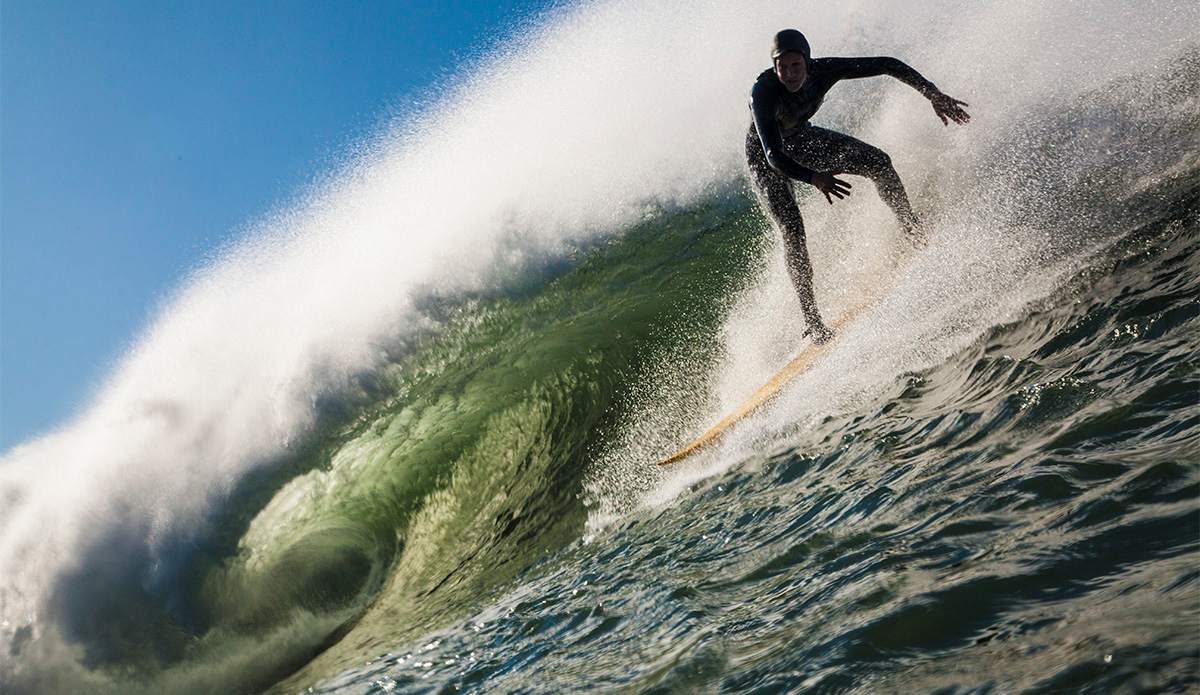 January 26, 2015 | Exercise Physiologist and mother Beth Price Jeffris is one of the first women (if not the first) to charge big outer bar waves at Ocean Beach. Here she shows what all of those years of experience look like on the take off. Photo: Sachi Cunningham 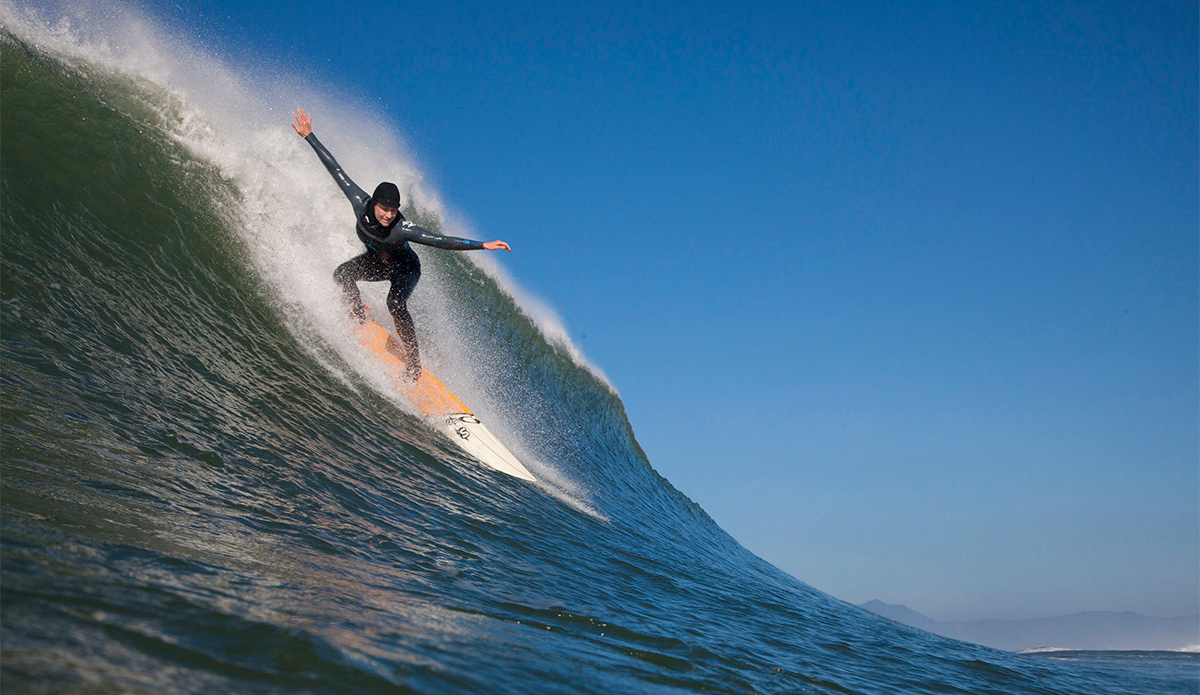 January 26, 2015 | Mavericks regular Savannah Shaughnessy recently moved to Ocean Beach and has been harvesting waves ever since. Photo: Sachi Cunningham 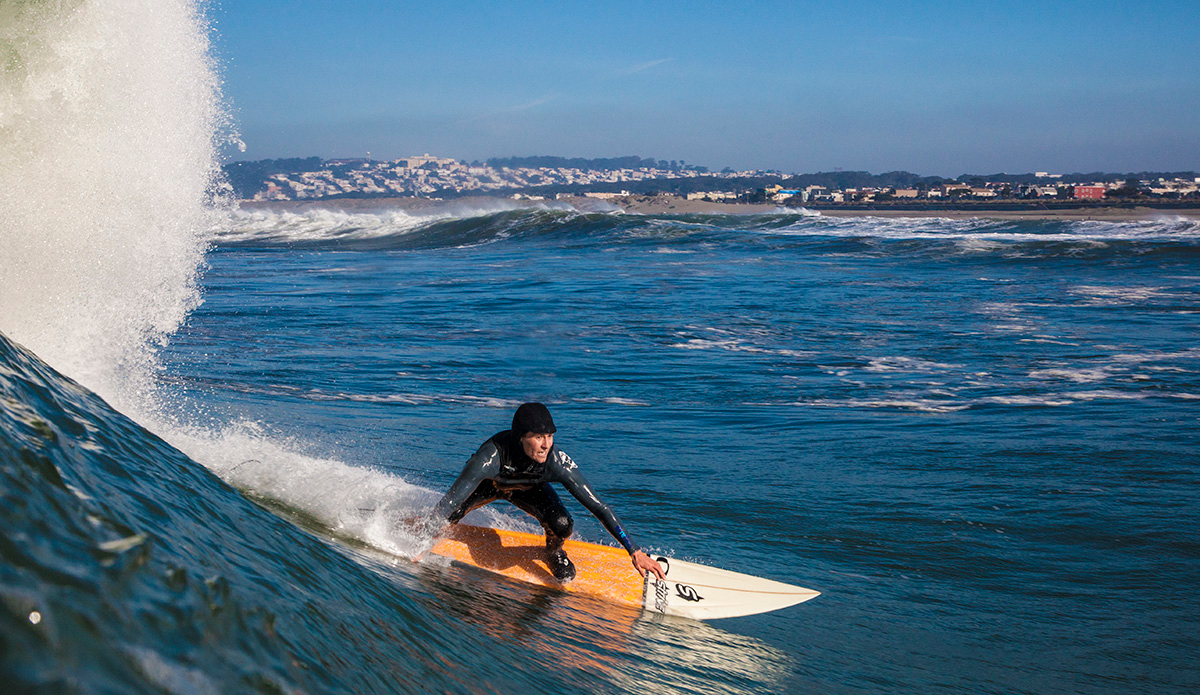 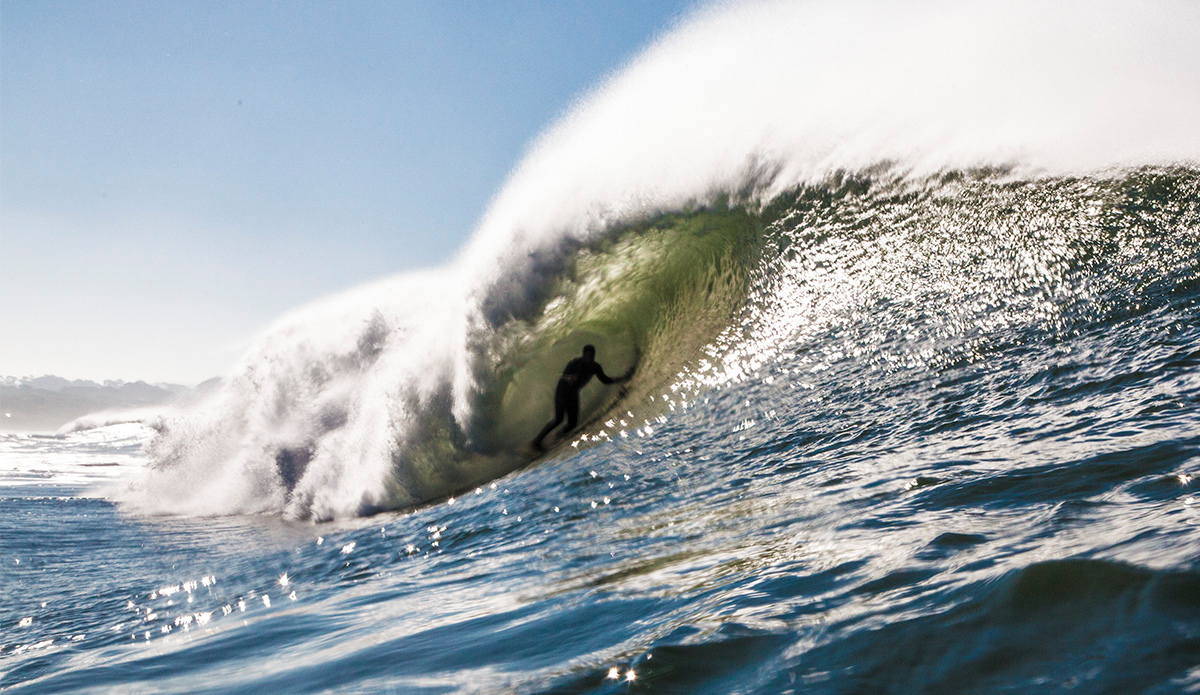 January 26, 2015 | João De Macedo, back in town visiting from his home land of Portugal shows off his master skills and knowledge of surfing and living at the beach for nearly a decade. Photo: Sachi Cunningham 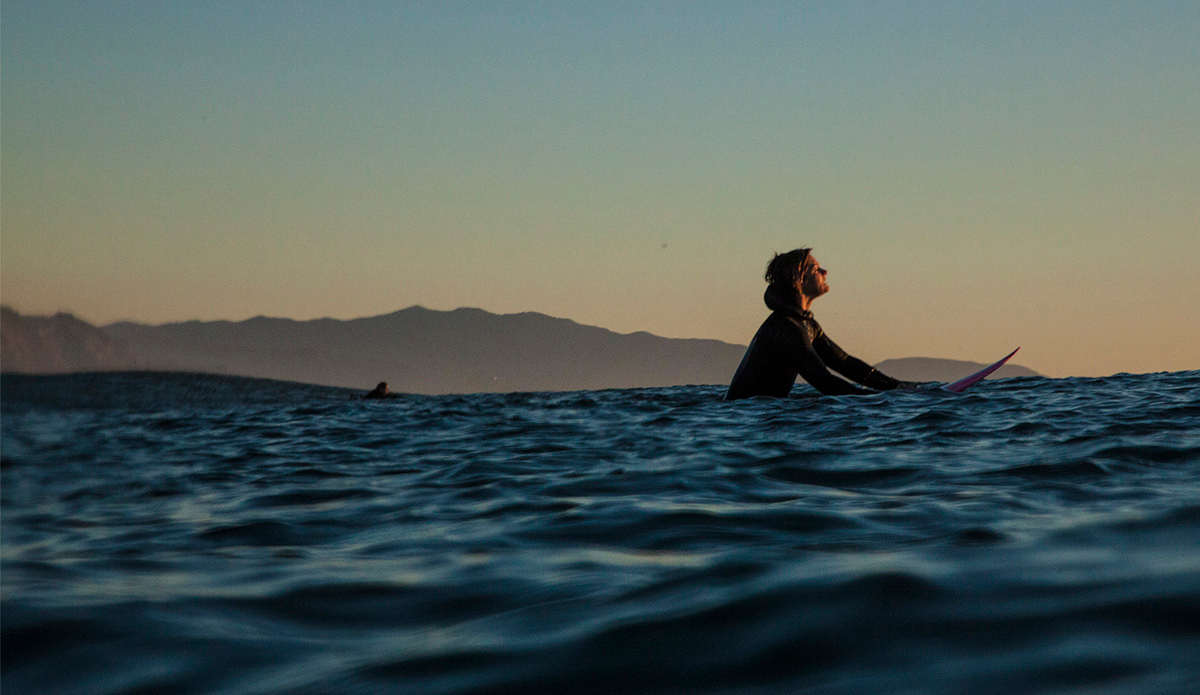 January 26, 2015 | Bianca Valenti looks for a few final waves before the sun sets on another perfect day at Ocean Beach. Photo: Sachi Cunningham 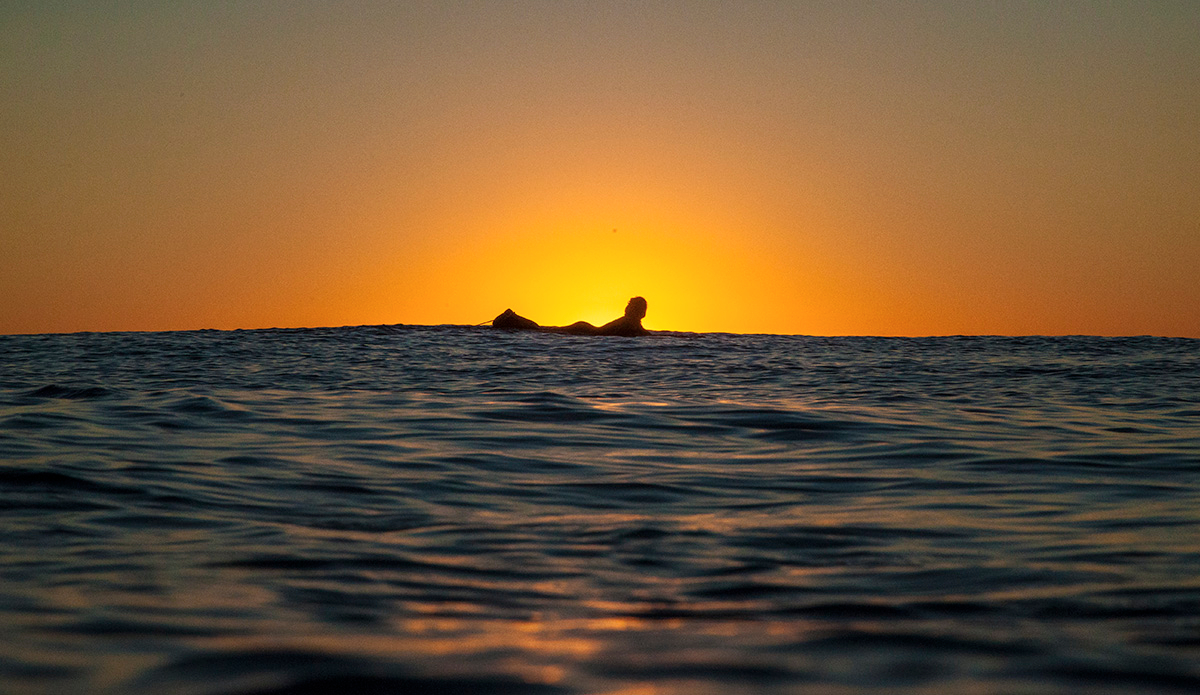 This a collection of images that I shot from the water at Ocean Beach in San Francisco from January 23 through January 25. I live on the Great Highway so I consider myself lucky to be able to check the beach almost every day. These were no ordinary days at the beach. I was out of town when the MLK swell of 2013 came through, but back then I had a six-week old baby by my side and I was in no shape to swim or surf in those conditions. But I felt like I had it in me. I made a pact with myself then that the next swell of that caliber I would try to swim out with my camera and test my skills as a water photographer.

I started shooting from the water years before I ever picked up a surfboard, back in 1996 when I bought my first film camera and custom water housing while living and working in Tokyo, Japan. As a life long body surfer and competitive swimmer with a budding interest in photography I knew that water surf photography was something that I wanted to try after watching a documentary about Aaron Chang as a young girl growing up far from the coast in Pittsburgh, Pennsylvania. Childhood summers were spent at the beach in Dana Point with my extended family (my parents are originally from the Los Angeles area) which helped to spark a life long relationship with the ocean. The first time I swam by, and shot a picture of a friend standing up in a barrel at Lakey Peak in Sumbawa in 1997, I was hooked.

Since then, the water photography dream has been put on hold at various points by jobs that paid the bills like working on the sets of Hollywood feature films and graduate school at UC Berkeley where I studied documentary film and journalism. I finally had the opportunity to put this collective experience to work on the surf beat that I love while on staff at the Los Angeles Times when I produced, shot and edited a video series called Chasing the Swell about the then small band of big wave surfers including Greg Long and Mark Healey as they follow a swell across the Pacific during the first Big Wave World Tour. I have since left that job to drive across the Americas along the Pacific for a year with my husband to start a family and pursue new adventures. Today I am happy to be back at Ocean Beach with a tenure track job as a Professor of Multimedia Journalism at San Francisco State University, a job that gives me the flexibility of schedule to get in the water often.

This season I’ve tried to regularly surf, swim, bodysurf or shoot in order to get in shape for a swell like this past weekend’s. At the start of the season I asked Ocean Beach body surfing legend Judith Sheridan to take me with her on a swim from shore into the lineup at Mavericks on a small day in order to challenge myself with big ocean swimming. Judith is one of the first people I met when I first moved to San Francisco from Los Angeles in 2002. We met in the water at Kelly’s Cove bodysurfing and she has taught me every valuable lesson that I know about how to swim safely and read the conditions at Ocean Beach. I swam at Mavericks with my camera on two other occasions this season, once to film Big Wave World Champion Bianca Valenti for a video story in the SF Chronicle and once to cover the first all women’s big wave invitational, the Wickr X Supersessions. I also swam out at Ocean Beach on Black Friday, November 28, which was good training.

This preparation and training, along with the 18 years of experience that I’ve had shooting surf spots around the world, a life time of bodysurfing and over a decade of competitive swimming and water polo under my belt mean that I was fairly confident that I could at least give it a go on Saturday. The unusually large number of great surfers in the water in addition to having Bianca paddling by my side also helped to inspire me.

Bianca and I got in near Lawton Street but were quickly swept north almost to Lincoln, so the first 30 minutes of the session were spent swimming against current to get back to the peaks near Noriega.

People always ask me if it’s harder to surf or swim at Ocean Beach. They both have their challenges, but the benefit of swimming is that, for the most part I can dive under the turbulence. The tricky part is knowing when to stay down and where to come up, and the greatest challenge is that, because I have a big camera strapped to my wrist I can really only use my legs for power so swimming into position is a lot slower. Because it’s a beach break, the number of waves that you have to dive under is also far greater than any point break. Dolphin kicking has always been my strongest asset as a swimmer. This kick, combined with the endurance training that four-hours of swimming a day provided in my youth prepared me well physically for shooting big days at the beach. However, for a day like Saturday, it was mostly my mind that needed the pep talk in order to get out.

At one point during the swim out near what I call the “guillotine” at the beach—the impact zone of the outer bar—I called out to Bianca, who had a watchful eye on me the entire time, and told her that I might not make it out. I was a little spooked by the reality check that my mind was doing when sizing up the height and power of the incoming waves. But before I could give up and turn around, the ocean made an opening for me and all of a sudden I was swimming next to guys like Ocean Beach native and Mavericks regular Marty Magnussen, and Santa Cruz Mavericks surfers Nic Lamb and Kyle Thiermann.

I played it fairly conservatively during the shoot on Saturday, staying mostly on the shoulder and letting the wave dictate when and who to shoot. At one point local charger and friend Lance Harriman gave me his board to rest on for a bit. It seemed like every time I swam closer to the lineup a huge set would come, so I was grateful to, for the most part (knock on wood!), miss any massive doses of carnage. I also always make sure to come back with some reserve energy in my legs, as I’ve been caught in currents in the past that make the swim in take an as long as an hour.

The next day the swell was what seemed to be significantly smaller, but the truth is it was still a big, solid day at Ocean Beach and more consistent. I went out with Bianca twice this day. Dayla Soul, a Director who is making a documentary about the women who surf Ocean Beach called It Ain’t Pretty put out the APB to all of the lady surfers and before long Bianca and I were joined by the “outer bar babes,” our friends Suzie Yang, Beth Price, Bianca Valenti, Sarah Martins and Savannah Shaughnessy. With the confidence of the previous day under my belt and the energy and inspiration from this group of female friends, I managed to swim for about two and a half hours.

Kudos to all of you brave souls who made it out to the lineup on Saturday! I’m ready to take the lessons I learned this past weekend and push myself to new limits on the next big swell and I look forward to clicking away at shots of you standing in big open barrels!