The Case for Sending It As Hard As You Can 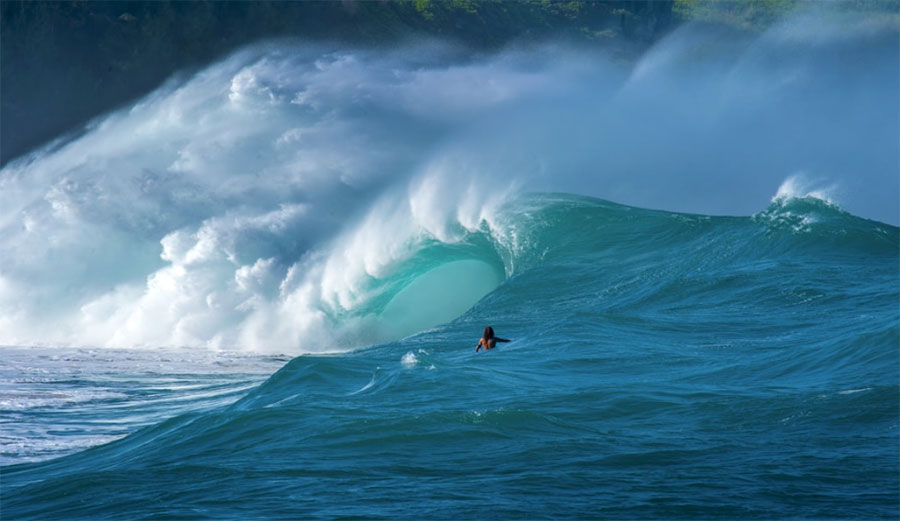 Send it whenever you can. Photo by Brent Storm on Unsplash

Do you send it? Like, hair straight back, eyes squeezed shut, full-throated sending? It’s a given that you should… but do you? Oh, it’s easy to tell yourself that you do, but who among us hasn’t looked over the ledge knowing full well that it’s going to be a good one, and then, inexplicably to everyone watching, pulled back? Maybe you thought you were a little too deep. Maybe the wave felt a little too steep. Maybe it was a little too big. Maybe, maybe, maybe.

The shame runs deep. It burns the soul as you paddle pack out, your back to the pack of angry and astonished onlookers who just witnessed you purposely refusing the set wave of the day. The shame crawls over your shoulders, up your neck, and onto your scalp, where it sits there, clinging to your hair and cackling maniacally into the mist still floating in the air from the offshore breeze. You shake your head, staring stoically out to the horizon, hoping that you will convince everyone that you saw something in that wave that they missed. Something that made it un-makable. Anything to get that shame monkey out of your hair. But you know what? You’re not fooling anyone. And everyone’s been in that same boat. If they haven’t, rest assured that they will be at some point. The boat is full of people who wish they went on a wave they didn’t. Here’s (one of) mine.

Mexico, circa 2017. Huge south swell. Days of waves, shoulders ruined, skin peeling off face in great sunburned sheets, sinuses so full of water my eyes were bulging. There had been many good waves in that little run of swell, and I had certainly got my fair share of them — more than my fair share, if I’m being honest — but this day was a little bigger than I was comfortable with. The swell was peaking, and I was severely under-gunned. If memory serves (which it generally doesn’t), I was on a 6’1″ standard thruster. Something in the seven-foot range would have been nice; something that wasn’t as thin as the skin peeling off my forehead.

The waves, though, were stunningly perfect, wrapping around the point and sprinting off towards the shore like a stone from a sling, gaining speed as the bottom came up to meet them. Only a handful of people were out — a few on Wavestorms gliding in obscenely early, a few more on boards that suited the day — and I just needed to try. Got worked a bunch paddling out, which is to be expected. Sat just outside the pack to have a look, realized it was a little bigger than it looked from the beach, which is also to be expected. A few sets went by, and after about a half hour came that point where everyone is paddling back out and you are alone in the spot. It’s your turn. The horizon bunched up as though a giant squeezed it between its hands and I swear to God, the best wave I’ve ever seen pointed itself at me. Big, though. Oh, it looked big. Is that going to close out? I thought to myself. It’s going to close out. I realize now that was the beginning of the end. That was me starting to convince myself not to go. It was not, of course, going to close out. Everyone was watching though, and I could feel their eyeballs on me. Someone hooted. Fuck.

I paddled deeper. Too deep! I thought. You’re going to blow it! I paddled frantically for it, though, until the very last second. I looked down the line at this beautiful perfect wave, an azure canvas unfurling in front of me. I was deep, certainly, but not too deep. But this wave was big, fast, and everyone was watching. And then, seemingly without a thought in my head, my hand grabbed a rail, yanked it to the side, and I pulled back. I pulled back. For two seconds, while the spray pelted my turned back, I tried to convince myself that I wouldn’t have made it. Everyone was watching, I thought. If you didn’t make it, they would have seen you blow it.

But you know what’s infinitely worse than everyone seeing you blow it? Everyone seeing you not even try. It’s far better to try and fail than to just spin your board and pretend you didn’t. I’m going to remember that single wave probably for the rest of my life, and I cringe whenever I do. It’s one of the only waves I will forever look back at with regret, and it’s because I didn’t even try. So please, please, just send it. Otherwise you’re going to miss out on a lot of good waves and a lot of good wipeouts. Hair straight back, eyes squeezed shut, full-throated sending.