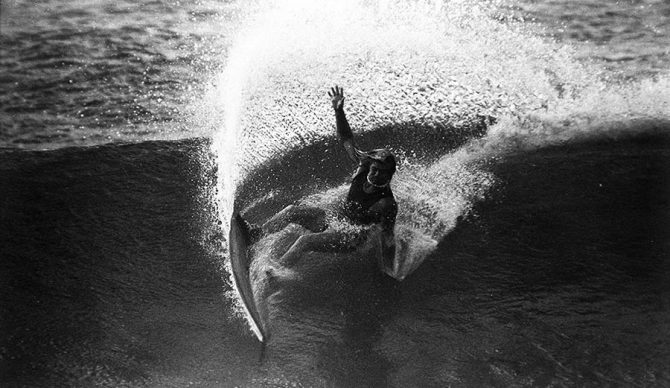 Editor’s Note: Welcome to our new series, Surf History 101, where we look at innovations in the world of surfing and beyond that changed the pursuit forever. In this edition, Sam George examines the cutback and how it shaped performance.

A maneuver in which the surfer redirects the board from its forward moving direction toward the wave’s shoulder, turning back toward the curl in an arc varying in degrees of trajectory and commitment.

Although it would be difficult to pinpoint the very first time a surfer riding in a standing position redirected their angle of attack, the consideration of surfboard evolution goes a long way to attributing the development of the modern cutback. In the beginning, there was primarily the slide, as 17th, 18th, and 19th century Hawaiian proto-surfers tackled their island waves on craft carved from koa and wili-wili trees. This isn’t to say that they just rode straight to shore, nor that their boards weren’t sophisticated in design enough to angle across the face of a wave and steer back toward the curl, this huge step in progression known as “holo i ka lala, a ho’i ka muku”, which translates to “riding in a slide and returning to the curl.”

Nevertheless, any change of direction even approaching 180 degrees would pretty much be out of the question on a solid wood olo or alaia. Fast forward several centuries (to 1934, not to be too fussy) and the development of the narrow-tailed, still finless Hawaiian “Hot Curl” design. While intended by progenitors John Kelly and Fran Heath to provide control in bigger island waves, hot Waikiki groms like Rabbit Kekai found that its narrow tail and deep vee bottom contour facilitated abrupt changes of direction in smaller waves like Queens Surf. While Kekai is widely acknowledged as the sport’s original “hotdogger,” his turns on the rocker-less wooden “Hot Curls” involved simply weighting the tail and swinging the nose in perhaps an arc of 40 degrees.

Revolutionary, in itself, but not quite a cutback.

For that we had to wait until the summer of 1950, when 19 year-old Les Williams, a top Malibu local, decided on a lark to paddle out on a balsa-wood board that designer Joe Quigg had shaped for his wife-to-be Aggie Bane. This “girl’s board” was only 9’ long, narrower and lighter than conventional craft of the era (easier for the ladies to carry, said Quigg) and, quite fortuitously, had a touch more rocker scarfed into the nose. 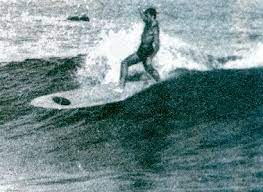 Williams’ first ride was a revelation (right). Rather than simply angling down the line toward the pier, as was the period’s custom, Williams was able to turn the board up and down the wave face, climbing and dropping while modulating his speed in an entirely new manner. The unprecedented maneuverability William’s experienced eventually led to what only an hour before was unthinkable: actually turning the board in a 180° arc back toward the curl, then cranking it around and re-establishing trim down the line. And just like that, the cutback was born — the first modern surfing maneuver.

What makes the cutback unique in terms of progression is that it actually pre-dated the sport’s first truly “functional” surfing maneuver: the bottom turn, attributed to 15 year-old Phil Edwards in 1953. The cutback, then, represented an aesthetic, and, in fact, an ethical paradigm shift of seismic proportions. Gone were the days of the graceful slide toward shore, with any sort of performance limited to body positioning and personal style. Suddenly the thing was no longer simply the ride and the rush, but the desire to see where a surfer could put his board on a wave, moving not in concert but in opposition of the medium.

Turns became more acute, approaches more aggressive, maneuvers more extravagant. All extemporaneous surfing moves —top turns, roller-coasters, re-entries, snapbacks, hacks — have followed the cutback, as over the decades surfers and their equipment have evolved almost exclusively in pursuit of greater maneuverability. To the uninitiated, the widespread resurgence of longboarding might indicate otherwise. When, actually, the cutback is as directly tied to a nose ride as it is to any shortboard pocket ride. All while the more recent trend toward “mid-length” surfboards has re-established the carving, roundhouse cutback as an essential element of enlightened performance. 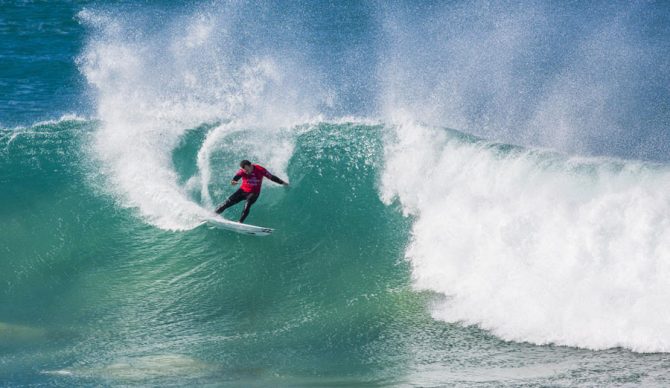 Joel Parkinson, featuring one of the most enviable cutbacks of all time. Photo: Pierre Tostee/WSL

Virtually every maneuver done on every wave can trace its roots to the cutback. But now let’s talk about the downside: you could just as easily claim that the cutback was the maneuver that ruined surfing. Simply because from the moment Les Williams first redirected Aggie Bane’s “girl’s board” 180° back toward the Malibu curl, sharing the ride toward the pier with two or three of his buddies was unacceptable: he now needed that whole wave to himself. And we all know where that attitude has brought us.

Accepting that the bottom turn is the only truly functional surfing maneuver leads to the conclusion that in the breast of every surfer beats the heart of a show-off. With the exception of the aerial, an unobtainable move by the vast majority, the cutback represents the most daring, and in many cases, the most arrogant surfing maneuver performed (or at least attempted) on virtually every wave ridden by every surfer, regardless of skill level. Like I said, a bunch of show-offs.