The Down Carve Is the New Air Reverse

“Airs suck. They’re not even fun at all. If you get barreled and come out, or not even get barreled, and you lean into a snowboard carve, backside or forehand, that’s so much more fun than trying to break your knees or ankles on some windy piece of shit wave.” – Kolohe Andino.

For a man whose competitive surfing life has been somewhat built on his signature tail-high air reverse, this statement’s sentiment is one that rings true and doesn’t go unnoticed.

The snowboard carve Kolohe is referring to in this snippet of dialogue taken from his recently-released instant classic, Reckless Isolation, is better known as the down carve. You know the turn. It’s the one that the likes of John John Florence, the late, great Andy Irons, Conner Coffin, and the fresh-faced Ozzie Jai Glindeman do so well because it feels so good. These carving Gods and phenoms have managed to keep the down carve relevant in a time when too many pro surfers are looking to the air for inspiration and points.

Sure, if a pro chucks in a grab variation to a lofty full rotation reverse, they’re going to get applauded and scored accordingly. But with a seemingly endless stream of prodigious, stickered-to-the-nines, 12-year-old kids now popping them like nobody’s business, surely the standard air rev has lost its meaning at the pinnacle of our sport? And when talking shop on the standard air reverse, we’re shining a light on the same tiresome trick that Taj was stomping on repeat in the early noughties. The one that hasn’t exactly aged like a fine wine from Taj’s neck of the world. More along the lines of the questionable faux pas surfing gave the world in that era – the three-quarter length boardshort.

In both the professional free surfing and competition realms, air revs are a dime in too many dozens, whereas the almighty down carve is anything but overworked. And if you’re sitting there thinking “yeah, but carves have been just as done,” then you only need to look at the way Jai Glindeman is putting progression, through style, back into turns to stop that thought in its tracks (check him here). Not to mention John John’s dominant 2017 performance at Margaret River Main Break that rewrote and then torched the rule book on what can be achieved in sizeable waves.

In terms of relatability, and with a modest attempt at an estimate, it’d be safe to assume that 80-90 percent of the world’s surfers have never even tried an air. Or, at best, they may have tried a few as a kid, got bored or injured in failed landings and decided to put their precious time spent on waves to better use. With the current global push towards riding solely alt-craft only exasperating the “airs aren’t for me“ mentality, aerial surfing, although impressive, isn’t what your average surfer is looking for from the ocean.

Very much on the contrary, in fact. You can bet a pretty penny that it’s this majority of surfers who would love to push their speed capabilities on a compressed, sizzling, fast carve that leaves them in the critical bottom of the pocket with two choices up the sleeve. If it’s a closeout, you can cut even harder across the breaking part of the wave with a punk-rock full stop – Mikey Wright style. Or, having already assessed the lip, go all the way back around for another tickle of it. Either way, it can be a finisher that shows full commitment or a set-up turn that puts you right in the red zone eagerly anticipating more.

The very essence of surfing is the carve, and down carving is a sweet, soul-satisfying abbreviation that every surfer should be striving to achieve at speed, and style out. Imagine seeing kids tweaking out down carves on closeout sections up and down your local instead of the go-to Hail Mary air rev. Whether you’re trying to impress your mates or the WSL judges, a solid down carve looks steezy, feels incredible and will never go out of style. A timeless turn in an overly saturated air rev world. 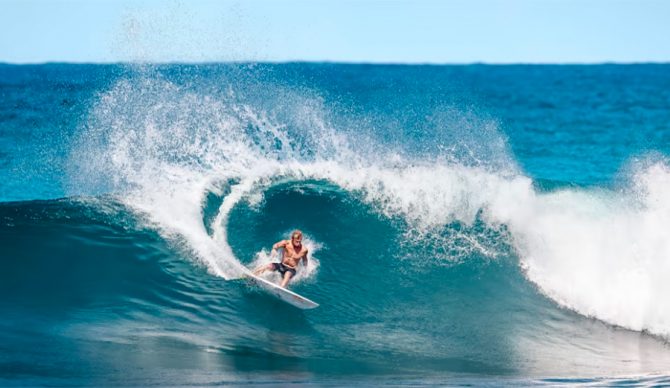