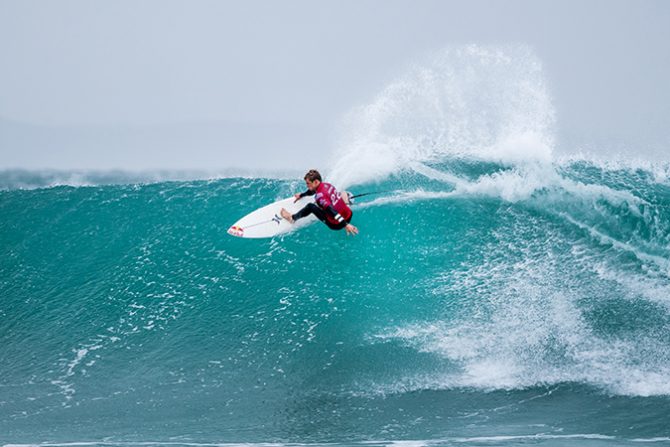 Is this Kolohe’s year? There’s reason to root for him. Photo: Ed Sloane/WSL

Get this: for all the surf hype that California generates — the silly trade shows, the fact it’s home to nearly every surf media outlet in existence, the yearly vid-part parade of the next up-and-coming “future world title contender” — a Californian has not held the ratings lead on the Championship Tour since 1996, when Shane Beschen did it after winning back-to-back events in Japan and Java. Until Kolohe Andino took the yellow jersey last week, that is.

So one more time for effect: California, home to all these amazing surf brands constantly bought and sold like cattle, these surf parks, these point breaks, these big waves (er, wave), hasn’t produced a ratings leader (not a world champion) a ratings leader, in 23 damn years? What the actual f***? I thank my friends at the WSL for digging up that factoid for me (I bugged them incessantly for it). Need one more? When Kanoa Igarashi won in Bali, he became the first California-born surfer to win a CT event since 2009 (Bobby Martinez).

So after discovering those interesting little nuggets, I have one take away: I’m openly rooting for Kolohe Andino to win his first world title. Yeah, I know, he’s a product of that California hype machine like no other – Target, Nike, Hurley, Red Bull, every big company imaginable lined up for years to sign Brother to its roster and help promote its products after he won his nine junior titles. On the surface, his would seem the antithesis of the soulful surf upbringing, having been raised by a former pro and all.

But I’ll tell you this from getting to know him just a little: he’s actually kind of the opposite of all that. He’s what you would call a surf dork. A nerd, absolutely obsessed with his craft. He doesn’t do drugs. Doesn’t like being a hipster (he’s a self-proclaimed jock) and he really doesn’t have a lot of attitude or angst – he leaves that to his pops, Dino who can often be seen stalking the beach at Trestles in the early mornings as Kolohe trains, hood over his head, dark glasses covering his eyes, a throwback to an angrier era, perhaps.

Speaking of those early mornings at Lowers, if one were to reach the beach at 5:30 a.m. during the brief winter offseason, the skies often overcast with a marine layer, one would almost certainly find Kolohe working on his game, and if not at Trestles, then anywhere a wave is breaking in San Clemente. Kolohe Andino put in serious work this offseason. He is anything but entitled. He longs to win. And win big (his boards and lockers feel it when he doesn’t). In 2016 he finished fourth and ended seventh in 2017, his two best finishes since his 2012 rookie year.

Another reason to root for him? He’s legitimately a nice dude. I sat down with him for an interview in a Huntington Beach hotel a couple of years ago and as we were settling in, I introduced myself, telling him how fun it had been fun to watch him out in the lineup at Lowers over the years. His response? “Man, I hope I didn’t burn you. I didn’t burn you, right?”

Still, detractors might give Brother an asterisk if he wins this year, if anyone other than John John wins this year because of the Hawaiian’s formidable lead before he signed off with a knee injury. But I feel like Kolohe was close to breaking through anyway: he’s finished second twice in 2019 (Gold Coast, Margaret River) with two even thirds (Rio, J-Bay). If ever there was a time to pounce, this is it. Which makes the pressure ever-more palpable for south Orange County’s favorite son.

Kolohoe is more apt to compare himself to mainstream sports athletes than fellow surfers. He’s thrown the first pitch at Dodger Stadium and is friends with Jets starting quarterback Sam Darnold. His response recently when asked what gets him fired up about surfing in the Olympics? “I am more excited about walking [during opening and closing ceremonies] with guys like Kevin Durant.” So, like a pitcher avoiding talk of a no-hitter during a game, it was no surprise he didn’t respond when I sent him a note to talk about being the first Californian in 23 years to hold the ratings lead. It’s a precarious balance, this winning thing. And this might be Kolohe’s year. He certainly doesn’t want to do anything to jinx it.