The Final Say: Oakley Pro Bali and “The Perfect Ride” 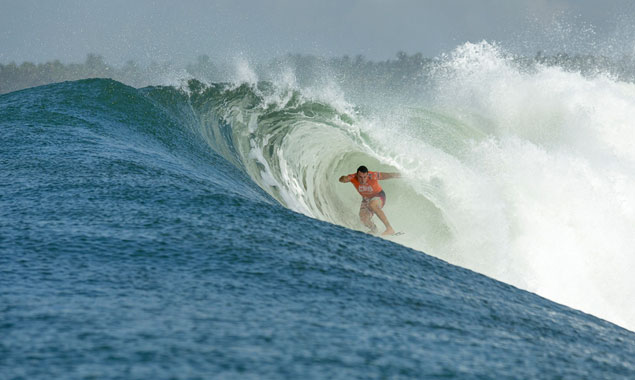 I’m gonna bet that even Nadia Comaneci could have executed a fade take off to barrel at Keramas. Probably could have even gotten herself one of the record number of scores in the good to excellent range that were dished out during the event. Comaneci, of course, is the Romanian gymnast who delivered the first ever perfect ten for her routine on the uneven bars in the 1976 Montreal Olympic Games. She thus introduced to us the notion that an athlete could in fact execute a flawless performance, an idea which changed the very nature of sports like surfing that are decided by a subjective judging criteria.

Flawless…perfection…they’re words that bring to mind works of unimaginable vision and genius like say the Sistine Chapel…Beethoven’s Ninth Symphony…or Chris Isaak’s nose. Joel Parkinson’s perfect ten in Round Five against John Florence in which he easily split a five foot Keramas tube and fell while attempting a round house on a sublime end bowl didn’t have the same air about it.

The Oakley Pro Bali signaled the Tour’s long awaited return to Indonesia – the world’s number one nation for tubular swells. Not since the Quiksilver Pro G-Land had to be abandoned in 1999 due to political turmoil (and the nasty inflation in insurance premiums it caused for any would-be event host) has this archipelago of some 13,000 islands held a regular Tour event. The mindless perfection of Keramas showed just how sorely it had been missed. It’s tube central here at this time of year and unbeatable for consistency. Fierce, tightly wound low pressure systems spinning way below Australia churn out luscious long period lines that, by the time they’ve reached somewhere like Keramas, have become unimaginably groomed walls that spill hypnotically along the reef. The whole world knows how easy it is to get pitted here and that’s exactly why most of the surfing world has been here. There’s nothing hidden, no real consequences and, when it comes to separating the world’s best surfers in these waves, nothing but a series of decimal points.

When Comaneci secured the first perfect ten she did not raise both hands at the judges to show them the score. In fact she barely celebrated at all. “She seemed almost inhuman in her exactness,” wrote the Guardian newspaper of the performance. It was probably to do with how much pain she’d endured on the road to perfection. At the age of six she’d been enrolled in a gymnastics boarding school run by a brutally authoritarian former Romanian boxing champ and hammer-thrower, and eight years of human pretzel’ing later, found herself in a different league to her competitors. It’s not too hard to draw a parallel between her and John Florence. It was at a similar age that he first started descending into slabbing Backdoor detonators and punting into the wind at Rocky Lefts.  He’s suffered a similarly traumatic rise to greatness in the form of several serious injuries, including a broken back. Yet when placed in the mindless perfection of a wave like six-foot Keramas being scored according to tubes, the gap between he and his competitors can seem a lot less than it actually is. Every single one of these guys can get barreled with ease out here, and that was made apparent in the way so many of the high scores involved faded take offs, hand drags, chip shots off the Keramas wedge for a smooth passage through the oncoming sections.

Let’s not take anything away from Parko. He was for sure the best surfer in the contest, and watching him swoop into long blowpipes and spiritually keep pace with the lip was indeed art of the highest order. It was perfection too in a sense, but it just wasn’t that hard.

The beauty of Keramas is that it can also be a great performance wave. The inside nuggets offer gigantic air bowls and there’s ample opportunity for every kind of turn out there. When John Florence, still wearing a foot brace having recently torn his ankle ligaments, came inches away from stomping a corked side flip in his round five encounter with Parko, the very fabric of modern competitive surfing was called into question. Parko had already racked up a perfect 20 for a so-so barrel followed by another throatier tube – both entirely forgettable moments in the context of surfing history. But when John almost stuck his flip, the surfing world freaked out. Ross Williams was commentating at the time and let out an involuntary screech. And that was exactly the kind of response the perfect ride should elicit. We had witnessed a defining moment in competitive surfing – the coupling of unimaginable degree of difficulty with near-perfect execution. It wasn’t a make, and thank God for that. Had it been, John would still have found himself in an un-winnable situation, and that would have been just plain embarrassing.

In 2006 gymnastics did away with the perfect ten, changing instead to a judging criteria that was open-ended and had the potential to reward competitors for delivering moments of previously unimaginable athleticism. It makes sense. Why would you leave it up to a panel of judges to decide what is the entire conceivable spectrum of athletic performance? How are they supposed to know? They’re not the visionaries of this sport. It gets even more absurd when it comes to surfing. Instead of a pommel horse or the uneven bars, you’re dealing with the ocean. Not only are judges being asked to predict the limits of surfing, they’re trying to predict what the ocean will serve up. And that’s just whack. – Jed Smith