The Imperfect History of the Surf Leash 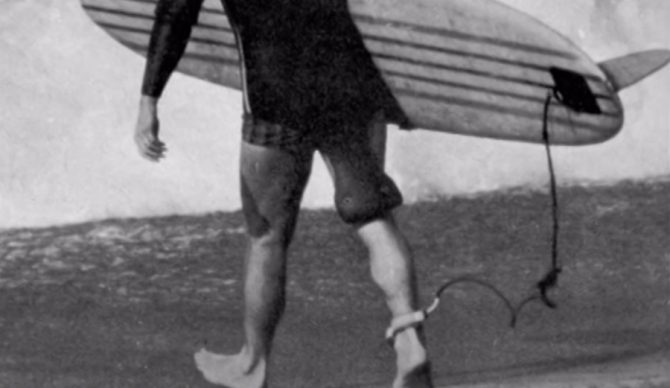 Through scorn, the leash became an important part of the quiver. Photo courtesy Encyclopedia of Surfing

Editor’s Note: Welcome to our new series, Surf History 101, where we look at innovations in the world of surfing and beyond that changed the pursuit forever. In this edition, Sam George looks at the leash, where it came from, and how it’s become an intricate part of wave-riding progression.

Where’d It Come From

Since surfing as we know it began to flourish along Waikiki’s ‘fertile crescent” during the 1600s, wave riding and swimming were intrinsically linked. The reason is simple: although Hawaiians could work wonders with woven, palm-frond cordage, the idea of strapping oneself by wrist or ankle to a heavy wooden board just didn’t seem sensible. Or perhaps it was the fact that in that romantically liberated culture, where wave riding was often viewed as a form of sexual prelude, tying yourself to your board so as to avoid a long swim to the beach after a wipeout signaled a certain lack of, let’s say, confidence in one’s performance.

In many ways it still does. Still, what’s so surprising is that use of the surf leash took so long to become accepted. While surf history buffs might point to proto-innovator Tom Blake as the sport’s first leash wearer back in the 1930s, he quickly gave up attempts, citing the inherent danger of being lashed to a 16-foot, hollow wooden ankle-twister.

Matt Warshaw’s Encyclopedia of Surfing introduces a very forward-thinking Frenchman named George Hennebutte, who in 1958 affixed an elastic cord to his board, attaching it to his ankle with a newly developed material called Velcro. The surfing world took no notice. In 1965, another French surfer, perhaps inspired by Hennebutte’s idée de génie, was pictured in the back-of-the-book, “human interest” section of SURFER magazine, strolling into the Biarritz surf with what looked like a yachting hawser connecting his ankle to the tail of his board. Again, surfers not only took no notice, but the accompanying copy actually mocked his Gallic intrepidity.

In fact, it wasn’t until five years later that the modern surf leash first appeared on the scene, tied not to the ankles but to the wrists of a pair of hot Santa Cruz locals, no doubt tired of sacrificing their fragile new ‘shortboards’ to the fiberglass-hungry cliffs of Steamer Lane. Debate as to whether it was Lane master Roger Adams or neoprene princeling Pat O’Neill who first suction-cupped a length of surgical tubing to the nose of their boards, the fact is Adam was first to be pictured employing the gizmo, again in the back pages of SURFER. There it was reported that not only did Adams and O’Neill use the tubing to crank the nose of their boards around more acutely, but it helped them avoid those previously inevitable chilly, potentially board-wrecking NorCal swims. 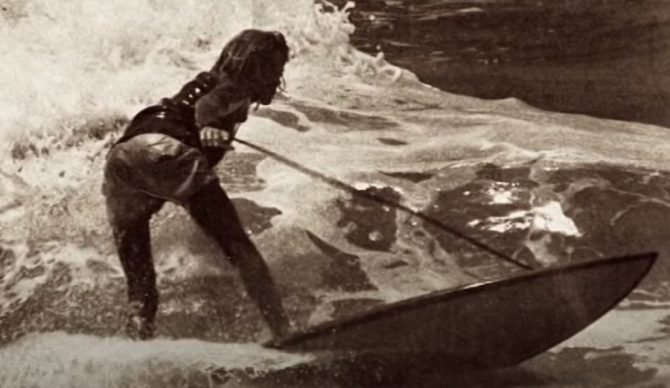 Did it help with turns? Maybe. But it couldn’t have been comfortable while paddling. Photo courtesy Encyclopedia of Surfing

Perhaps because it was top surfers this time, not unknown Frenchmen, the surf world did take notice, with innovation and widespread use following quickly. By 1971, the suction cup nose job and surgical tubing had been ditched for bungee cord, attached, for some inexplicable, hydrodynamically inverse reason, to the fin, either through a hole drilled in the base or, later, in a special fin box screw. The first commercially marketed leash added a leather strap (goodbye bowline knot) to the bungee, which, though eliminating serious ankle constriction, did nothing to abate the dangerous, post-wipeout spring-back. This problem was eventually surmounted by some careful thinkers at Control Products in Santa Monica, who developed the Power Cord, which would have to be considered the sport’s first modern leash.

The Power Cord brought back the Velcro ankle strap (mercî, Mssr. Hebbebutte) attached to six feet of hollow black rubber tubing with a longer length of 500-pound test nylon cord inside. Aside from being super strong, this cord limited the rubber’s stretch: good for surfer’s heads, bad for surfboard tails, which is why so many early seventies collectibles have telltale ‘leash rip’ repairs from the leash plug (also developed at Control) to the rail. Leash rips or not, the Power Cord was the standard until 1977, when the first urethane rubber leashes appeared on the scene, and while rubber formula and ankle straps have been tweaked over the ensuing decades, the surf leash, in form and function, has changed very little since then. Still rubber, still attached to a deck plug with a string, still affixed to the ankle with a Velcro strap. Voila! 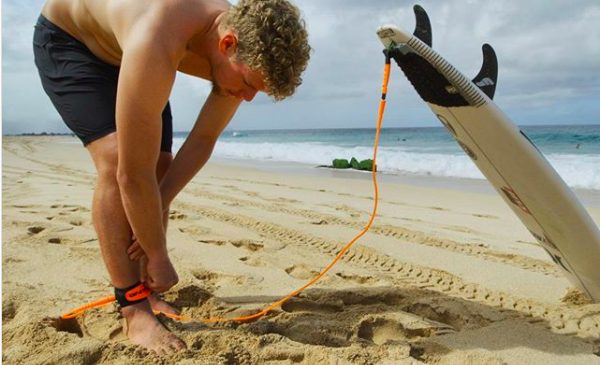 It took a while to get here. Photo: Dakine/Parallel Sea

The development of the surf leash, along with that of mass-produced, polyurethane surfboards and neoprene wetsuits, has been one of the surfing world’s most significant innovations. Perhaps the most. Certainly in the past half century nothing has put and kept more surfers in the water than the leash. Plus, no more swimming, allowing everyone to safely surf everywhere, regardless of ability. Minus: Read the previous sentence.

No longer a form of sexual prelude, modern surfing attaches very little dismissive stigma to those wave lovers who, unable to control themselves in the heat of passion, see no reason not to use the rubber. This permissive attitude obviously encouraging surfers everywhere to “practice safe surfing.”