The Long Trip Back: Greg Long Faces Cortes Bank and the Wave that Almost Killed Him 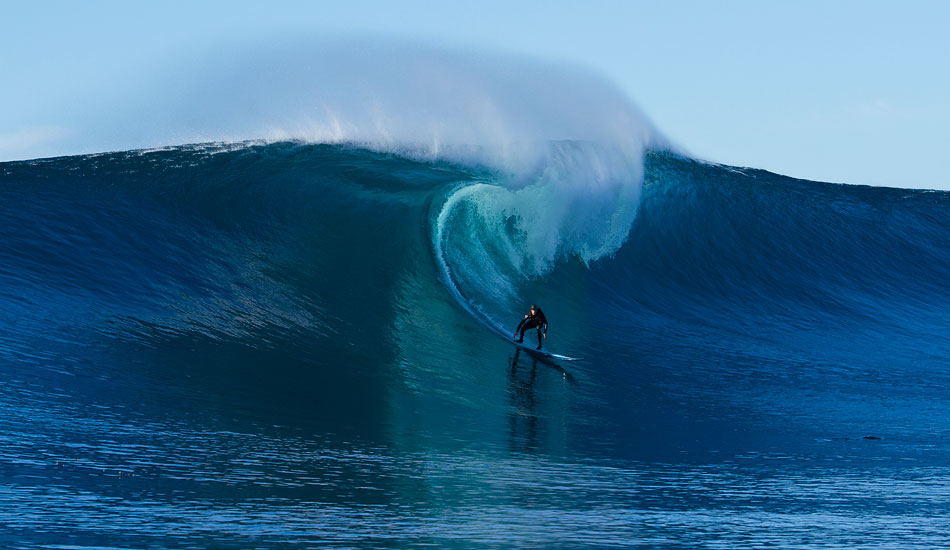 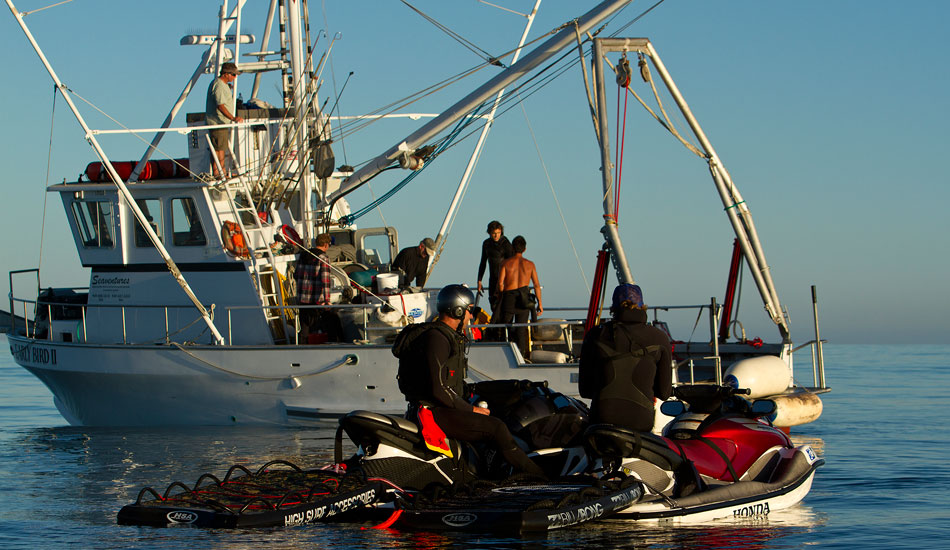 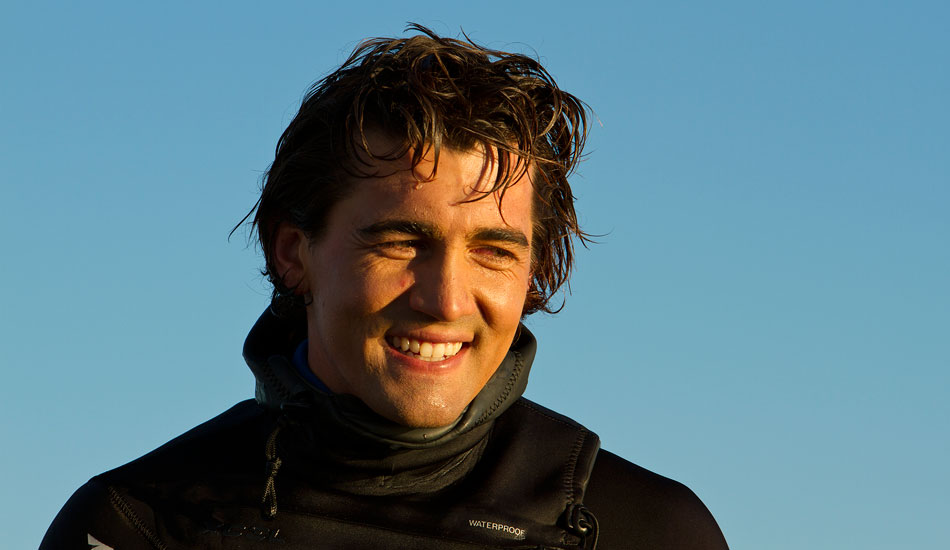 Greg, smiling at the rest of his life. Photo: Frank Quirarte. 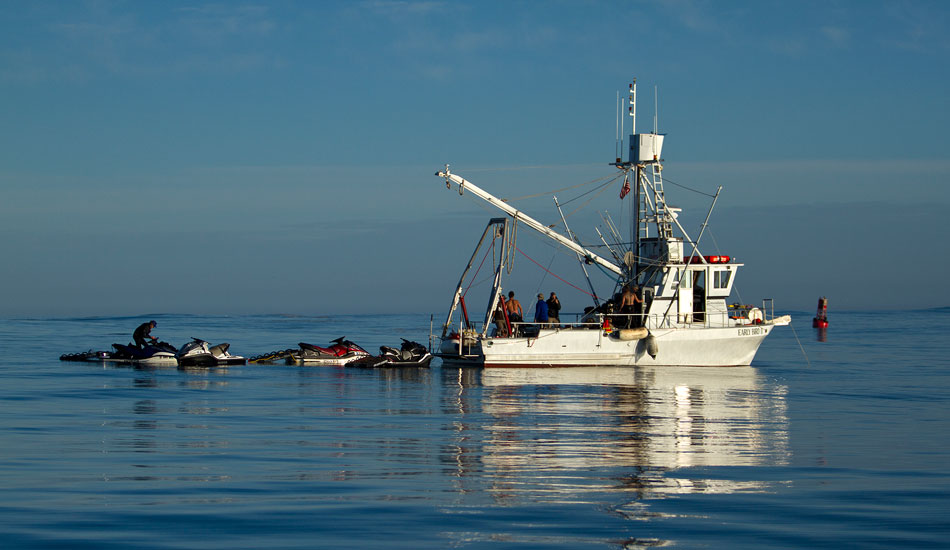 With skis in tow, the crew sailed on glass. Photo: Frank Quirarte. 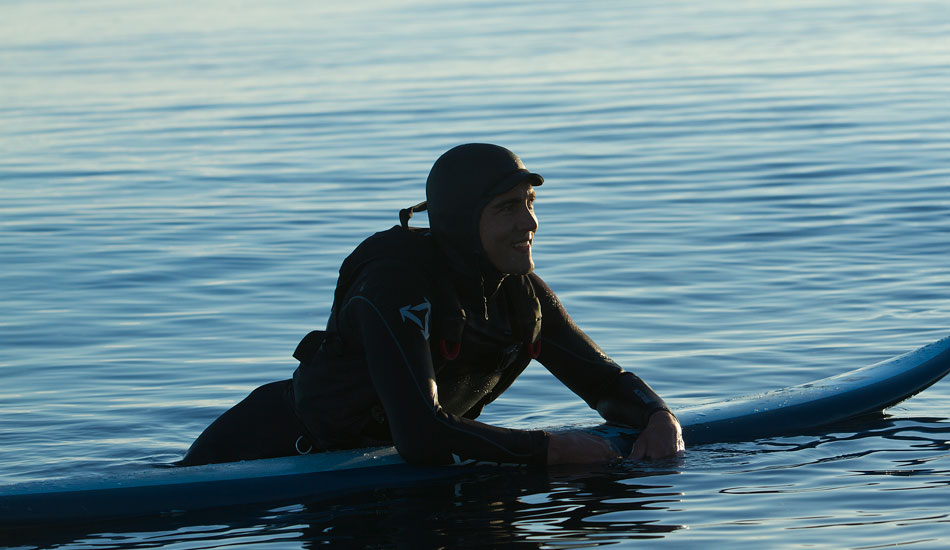 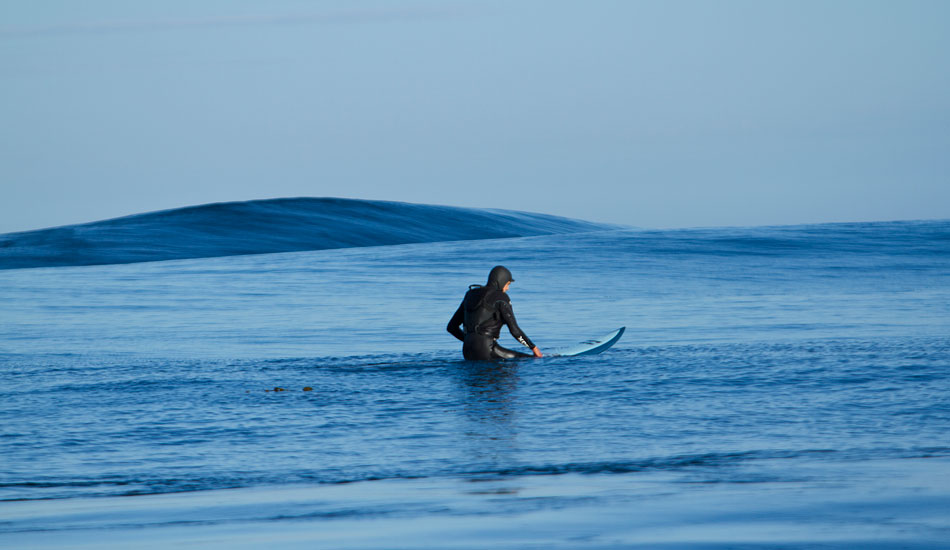 Contemplation a hundred miles out to sea. Photo: Frank Quirarte. 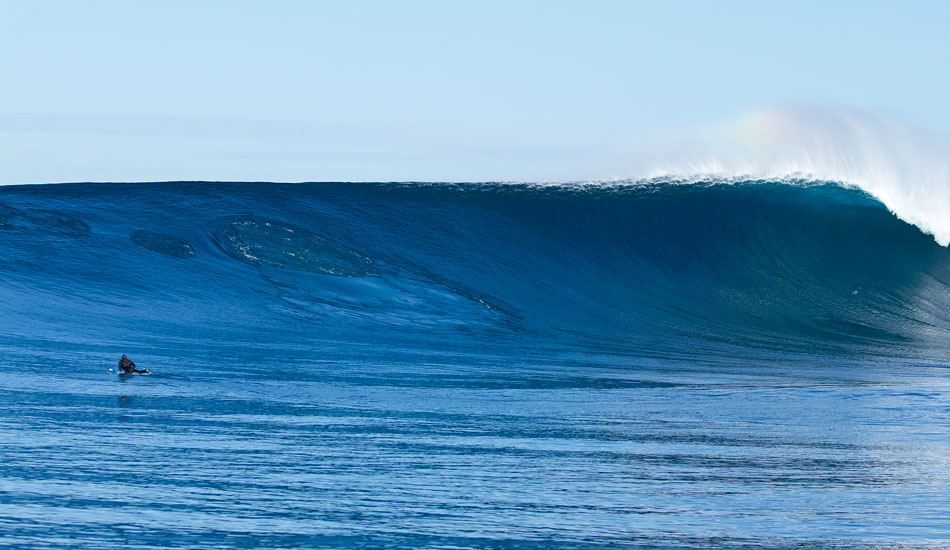 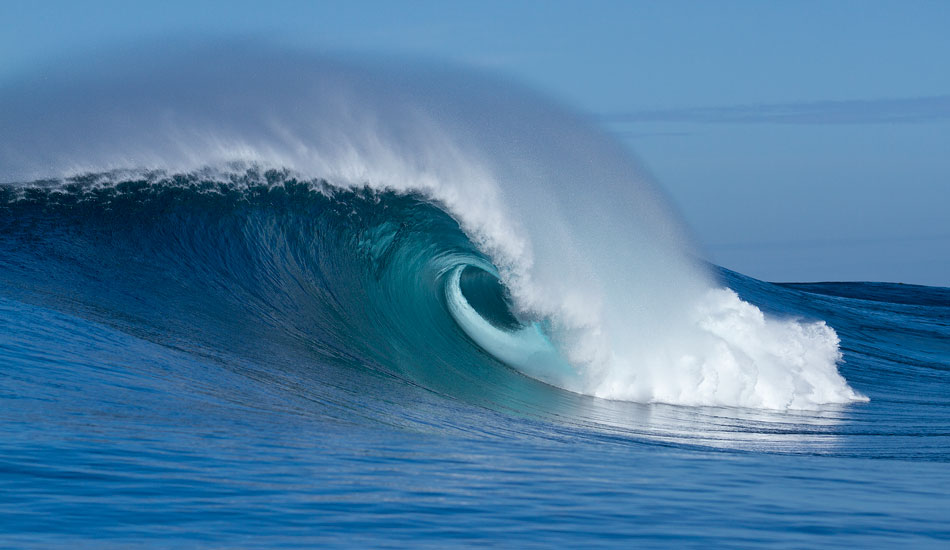 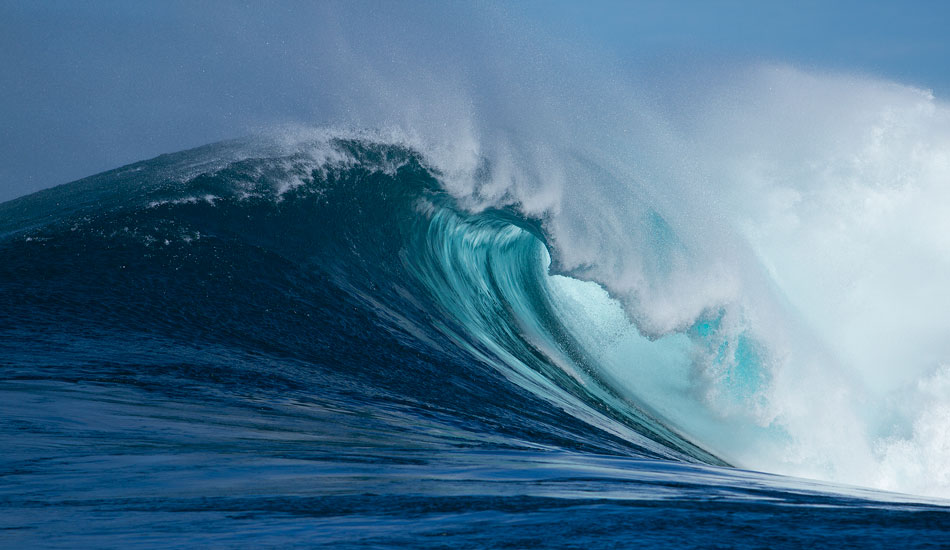 There is so much beauty in the beast. Photo: Frank Quirarte. 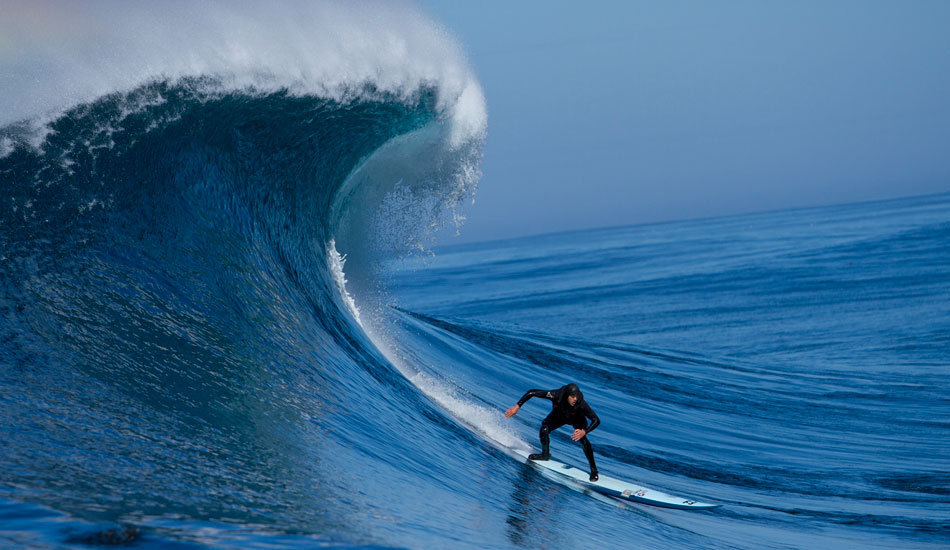 "It wasn’t big, by any means, but it was one of the most beautiful, memorable sessions of my life." Photo: Frank Quirarte. 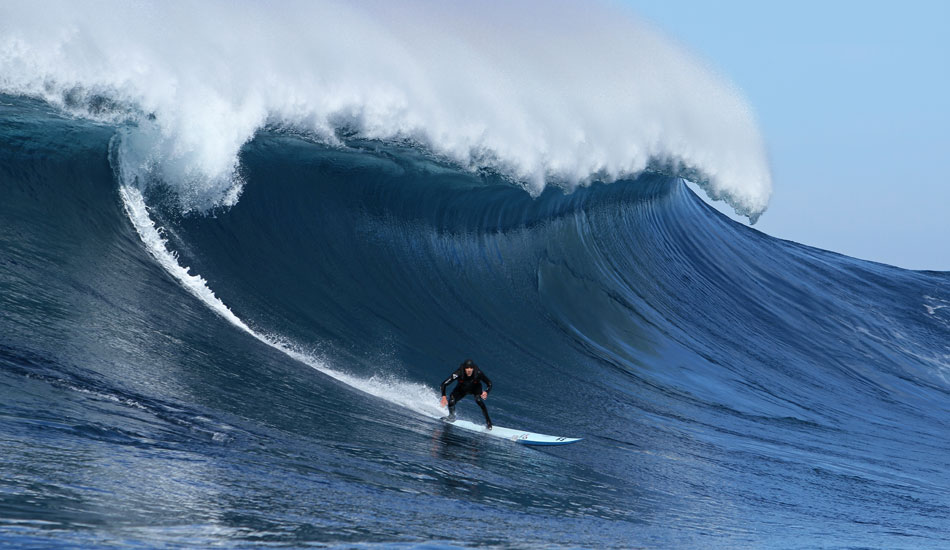 "Not big, by any means," is purely relative. Greg on a small one… for him, that is. Photo: Frank Quirarte. 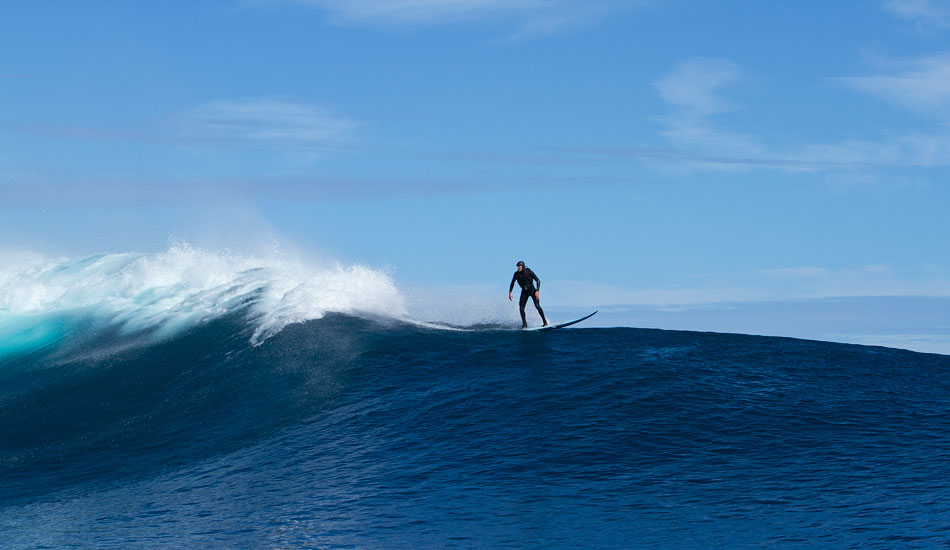 Off the back and on to a clean slate. Photo: Frank Quirarte. 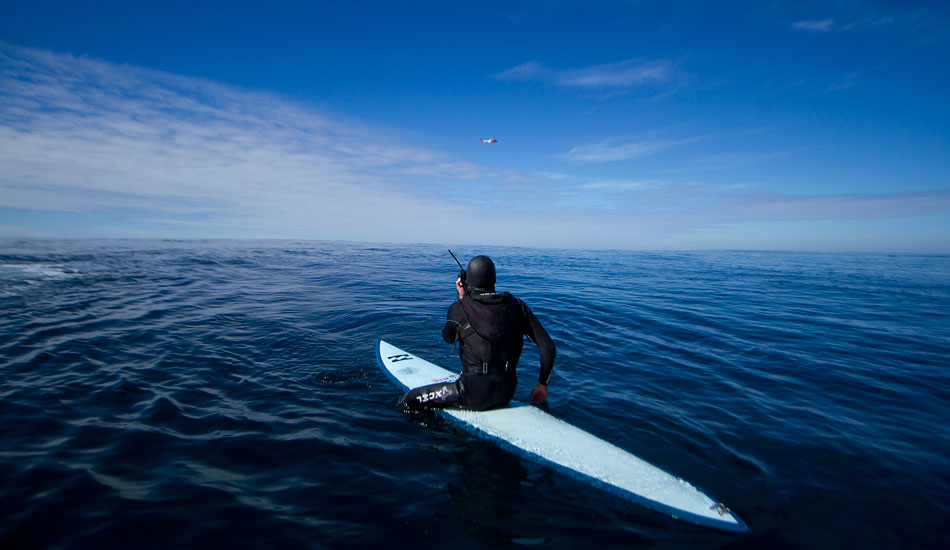 The Coast Guard flew by to greet Greg on his return to wish him well. He expressed his gratitude via radio. Photo: Frank Quirarte.

On December 21, 2012, Greg Long paddled into the second wave of a five-wave set at Cortes Bank. After making it to the bottom, the whitewater caught up to him. A hundred miles out to sea, surrounded by nothing but ocean, Greg was was driven far beneath the surface with three more massive waves behind him. He climbed his leash towards the light, fighting the need to breathe, just as he’d done hundreds of times before. This time, though, when he was mere feet from the surface, the next wave in the set landed on him. The full brunt of a Cortes giant forced out all of his remaining air, and he found himself back at the bottom of a black, churning maelstrom with empty lungs. Desperate for air, he pulled the cord for his inflatable wetsuit. Nothing happened.

For some reason, the suit that was supposed to bring him to the surface failed. Greg began climbing his leash again, almost reaching the surface before another wave hit him, battering him back down again. On the verge of blacking out, he began climbing his leash once again. Hand over hand, inch after inch, he hauled himself up, fighting back cramping, numbness, and panic. He didn’t make it to the surface. After reaching the bottom of his board, which was tombstoning ten feet below the surface, the cramping and numbness overcame him and he lost consciousness. His body was found floating face down by D.K. Walsh, who jumped off his ski and wrestled him through the whitewash of the final wave. Jon Walla and Frank Quirarte, the latter of which took the photos above, helped pull his body onto the sled. They rushed back to the boat, where he slowly began to regain consciousness and coughing up foamy blood.

After being airlifted to the hospital by the Coast Guard, he was tested and carefully monitored for secondary drowning before being released. A few short days later, he was back in the big wave lineup, attempting to get back on the horse at Mavericks. What he found there, though, was something different than before. The old ease he felt paddling into big waves was gone, replaced instead by lingering doubts and vulnerabilities. It wasn’t long before those feelings bridged the gap into his everyday life. “The ocean literally tried to kill me that day,” Greg said at a recent screening of Sine Qua Non, a film that peers into Greg’s life and looks at what it takes to do what he does. “It wasn’t letting me get to the surface. Having had so much love and respect and joy and beauty… I felt almost betrayed, in a way.”

After months of big wave sessions, each one refusing to give Greg what he was looking for, he took a step away from surfing. On a trip to the Peruvian Andes, the soft spoken hellman looked for the answers he had been trying to find on those sessions. He found them in the self-imposed solitude. A few weeks ago, he penned a letter for Surfing Magazine that explained it perfectly. This is an excerpt from it:

I realized that since the accident I had become caught up in trying to rediscover my life as Greg Long, “big-wave surfer.” I justified this pursuit through my belief that we should always follow our dreams. But in reality, everything in this world is constantly changing and we, as people, are constantly evolving and changing along with it, whether we accept and embrace it or not. What we may have felt or dreamed yesterday may not be true for us today, and we have to be OK with that. The more we try to hang on to the past, the more we will struggle to find our true selves and happiness in the present moment.

A few weeks after the one-year anniversary of that Cortes wipeout, Greg returned to Cortes Bank on a solo mission to make peace with the place that almost killed him.

“It was the day after the Mavericks contest that I went back out to Cortes,” he said, sitting in a chair in front of the audience at the screening. “I’ve come a long way – from saying I don’t ever want to ride big waves again, to riding big waves again but still never wanting to go back out to Cortes Bank, to going, ‘Well, that would be pretty exciting.'”

A big part of Greg’s motivation comes from  pushing himself not only physically, but mentally as well. He is driven to see how much he can endure. “It’s a big mental challenge, which is what I was seeking,” he told a captivated audience. “It’s really been a driving motivation behind riding big waves: the physical and mental challenge; really finding out what I was capable of when it comes to overcoming fear.”

The experience of his Cortes wipeout had him had festered inside him. While he returned to surfing big waves after his trip to the Andes, eventually being crowned the 2012/2103 Big Wave World Tour Champion, the underwater seamount a hundred miles off the coast of Southern California remained an almost immeasurably large hurdle – not because he was scared of it, but because he felt he had left a part of himself out there that day.  “It wasn’t necessarily fear, you know, going back out there… fear is really one of the greatest illusions in our life,” he said. “It’s something that we construct in our minds. There is nobody or anything in this world that says you have to be afraid of anything.”

But while fear may just be a construct of our own minds, Greg realizes that what he does is extraordinarily dangerous. “Danger is real,” he said, “but fear is just something that you create.” His return to Cortes Bank was partially an attempt at self-healing. “The intention was to go out there and experience it in a different way. I was definitely holding onto some kind of negative energy that I’ve been carrying with me since that happened,” he went on. “The easiest way to overcome your fears is to just move straight back into them. They shouldn’t be hindering you, or even exist in the first place. That was really what it was, I guess: liberating myself from that negative connotation that I was holding onto.”

His attempt was successful. Under a perfect blue sky and on oiled glass water, Greg, with the help of the crew, unloaded the skis, waxed his boards, pulled on his wetsuit, and went surfing. “The way the day unfolded was almost a gift welcoming me back out there,” he remembered. “It wasn’t big, by any means, but it was one of the most beautiful, memorable sessions of my life.”