The Massive Day in Mexico: “I Got Absolutely Obliterated”

Editor’s Note: Mark Healey caught a wave recently. Maybe you’ve seen video of it? You have? Yeah, we have too. If you haven’t, it’s at the bottom. What you might not have heard is that Healey almost didn’t make it to Puerto in the first place. Instead, we were all treated to an historic ride. This is Mark’s story. 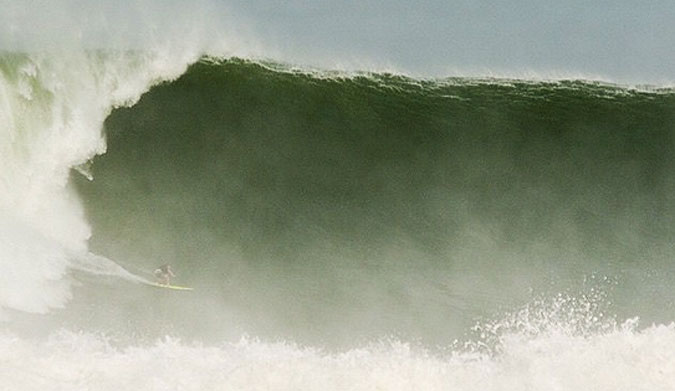 I was looking at that swell from about five days out. That’s when I started taking it seriously. There are certain times you look at a storm and you just know. You get to the point of no return where you think, “I know this is going to produce something big.” I surfed the contest in Chile and immediately got on a flight to Mexico–but before that, I almost didn’t come to Puerto. Before heading to the contest in Chile I had purchased two plane tickets for the same time, leaving for different places: one to Pascuales and one to surf Puerto Escondido. I thought Puerto was going to be too closed out, so I was all set to go to Pascuales. But at the last minute, deep down, I knew I had to go to Puerto.

On the big day of the swell, I took my time getting out to the lineup. I saw the waves that I wanted to get, knowing most of them were moving so fast they weren’t humanly possible to get into. Of course, there was nobody on them, so I had no scale of the speed. If you get caught inside there or break your leash, the amount of energy it takes to get back to shore might just end your session, and it could turn into a life or death situation. I was really sure of the wave I was looking for and knew if I was lucky, I might just have one shot. It took me about about twenty minutes to paddle out from the harbor and suddenly that thing just popped up. From my experiences there in the past, I know you really have to hold that line. The waves were so big they would feather like they were going to break for about two hundred yards, so from where I had to sit to actually catch a wave, it would look like I was going to get caught inside. I knew all that and had already made my mind up I was going to get one. Next thing I knew I was putting my head down and paddling my ass off.

By the time I stood up, I felt like that wave grew another fifteen feet. Meanwhile, I was just hanging on the lip. I’m thinking, “alright, I’m probably going to pull into the biggest barrel of my life right now.” Your instinct on big paddle waves like that is to get down the line because it’s moving around forty miles an hour, but you have to give the wave time to shape up, see what it’s going to do, and pick your line based on that. Well, it didn’t barrel. At that point, I realized the wall was too long for me to make so I got up high and tight and just dove under the lip. I got absolutely obliterated. I barely got back up for a breath before taking the next one on the head. And those next three waves were even bigger. I eventually took a handful more on the head and luckily that just deposited me on the beach. It was a proper thrashing.

Now that I’ve seen the footage, I realize if I hadn’t caught that wave I would’ve taken a bad beating from all the waves behind it. I still had plenty of energy and I just wanted to get blown out of a barrel, but by that point the south winds were picking up and it ended up just being the end of my day. That day easily had twice the energy of anything I’ve seen at Puerto Escondido. The energy level of that place is so hard to articulate without being there. Even if we were getting whipped in on a tow rope going thirty miles an hour, it would have been pretty hard to keep up with those things. These last couple of weeks are the first times I’ve been able to surf solid waves in a really long time, so now I’m just happy to be surfing. I just want to get every session I can.