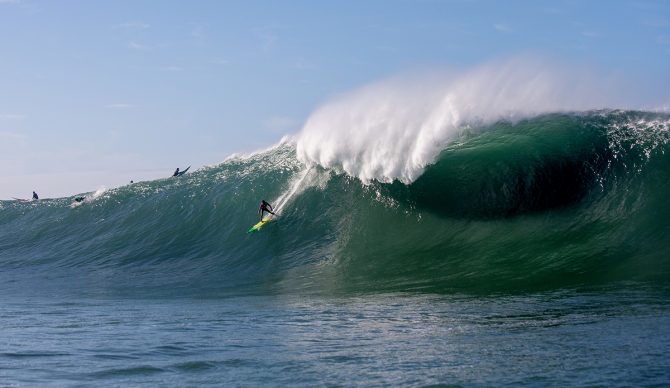 The 2019-2020 winter season will mark the inaugural Mavericks Surf Awards, the most recent iteration of a big wave contest at the Northern California wave. Luca Padua, on a keeper. Photo: Fred Pompermayer

As the host venue of a big wave contest, Mavericks has been dormant for nearly four years now. In fact, in the 20 years between Flea Virostko’s inaugural Mavericks Invitational win, Nic Lamb’s 2016 Titans of Mavericks win (the last time a contest was held) and today, Mavs has run just 10 times — a higher average than The Eddie, for comparison’s sake. But through name changes, permit disputes, and a failed attempt by the WSL to revive the contest on its Big Wave World Tour, Mavericks has had its fair share of speed bumps. Just over a month ago, the WSL axed the wave from the tour without ever running the event during its two years of ownership, and Mavs seemed all but dead from an “official” competitive surfing standpoint.

This morning, that changed. Mavericks pioneer Jeff Clark and local Half Moon Bay, Calif.-entrepreneur Chris Cuvelier announced the contest will return in a new format — one that will guarantee Mavericks hosts competitive surfing this winter. Enter The Mavericks Surf Awards.

The Mavericks Surf Awards won’t run on one specific day in a traditional heat format; instead, it will span a season-long video performance contest for waves surfed from November 1, 2019, through April 15, 2020. Surfers and videographers will submit videos on the event’s site, organized into five categories: Male Performer of the Year, Female Performer of the Year, Biggest Wave, Best Wave, and Best Barrel. An awards ceremony will take place in May 2020 in Half Moon Bay with athletes earning 90 percent of the prize money and 10 percent going to photographers and videographers.

The new format eliminates scenarios like last December’s call by the WSL not to run on what turned out to be an historic day, and it even throws a wrench in the contest field. For a place that’s historically exclusive, the venue is wide open. According to organizers, “all surfers – men and women, seasoned professionals and up-and-comers – are eligible to enter” in the newest evolution of the contest. The main stipulation Clark insisted on is that in order to qualify for entry, the surfer must complete the wave.

“Our mission is to celebrate Mavericks and support the men and women who have dedicated their lives to surfing this amazing spot,” said Jeff Clark. “When the WSL decided to cancel the contest at Mavericks, it was yet another sign that the times have changed, and we need to change, too. The logistics and politics of running a one-day surf event make it incredibly difficult. This is an opportunity to rewrite the script, keep the surfing pure, and stay out of the way of the athletes who want to go out there and free surf for the pure joy of it. Every swell, there are photographers out there documenting amazing moments that no one even sees. Now we have a way to capture those moments and recognize the best of the best every season.”

“Jeff and I wanted to ensure we would properly honor the wave and the athletes,” said event co-founder and Half Moon Bay resident, Chris Cuvelier.  “What we came up with are five key objectives that will guide our decisions: celebrating the wave, providing financial support to the athletes, promoting unity, inclusion, equality, and environmental stewardship, providing value back to sponsors, and promoting water safety.”

Maya Gabeira was one of a number of athletes on board with the newest iteration of an event at Mavericks.

“I am so excited to see what happens this season,” said Gabeira. “After four years without an event, it’s about time the place gets attention and support through a new format. The Mavericks Surf Awards will be a way to continue to see the performance rise and get the athletes more support and deserving recognition. I hold Mavericks in a very special place.”

Big wave surfer Luca Padua, a Half Moon Bay resident and the youngest person to surf Mavericks, is an official adviser to the contest.

“Mavericks is one of the biggest and most dangerous waves on the planet. I’m stoked that Jeff and Chris are placing such an importance on water safety and implementing rules about making waves to win. We want to see progression in the sport, not people hurling themselves into unmakeable waves. The platform these guys have created is perfect, and I’m beyond stoked to get this season started!”

Stay tuned for details as information becomes available. You can also visit MavericksSurfAwards.com.