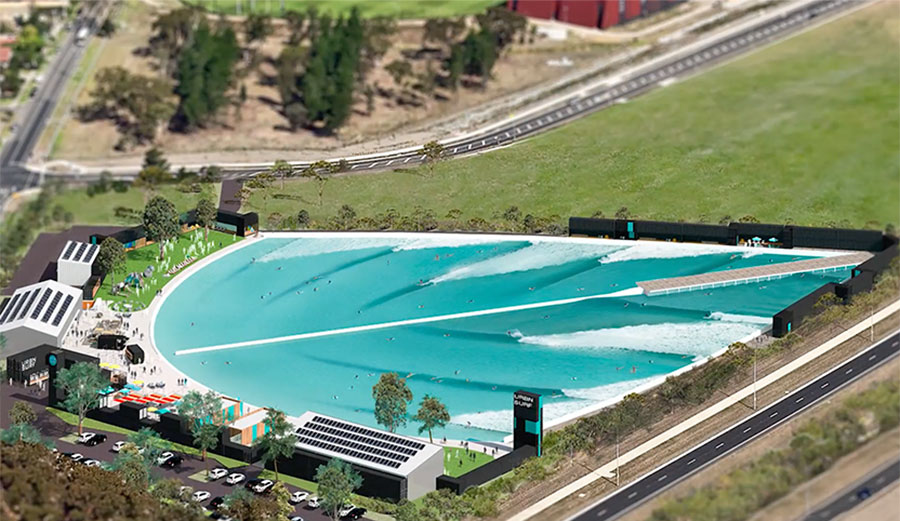 Do you remember when wave pools were blowing up your screens with promises of 6-foot tubes spread around the world in just a few short years?  Well, now the newest is about to break ground. It’s Urbnsurf in Melbourne, Australia. Right now, Wavegarden tech is all over the place, from Austin to Spain to Wales. Projects are under development–not under construction, mind you—in eighteen places around the world.

Back when it was first announced, the Urbnsurf project made some serious waves, but developers may have bitten off a bit more than they could chew. When it was first announced, they said they’d have the doors open to the public by 2017. Although a little late, Wavegarden just announced that they’ve got everything they need. “With funding and planning permits firmly in place,” they explained on their website, “URBNSURF MELBOURNE is scheduled to start civil works as early as March 2018, on a site conveniently located just 16 kilometers north of Melbourne’s CBD.” If all goes well, doors will open by April of 2019.

Of course, a man-made wave doesn’t come cheap. That funding Urbnsurf came in just shy of $30 million, and according to Wavegarden, all those dollars will create “up to 1,000 quality, six-foot ocean-like surfing waves every hour.” It will be the world’s first Wavegarden Cove, which is the second iteration of the Wavegarden’s technology. The lagoon itself is a little over two hectares and will be able to accommodate nearly 100 surfers at a time.

To put that 1,000 waves into perspective, Slater’s ranch barfs out around ten every hour. Although time will tell whether Urbnsurf’s waves will compare, as it stands right now, there’s no one that can touch the quality of the Surf Ranch. That, however, does not a business make. Along with the glut of waves produced, Urbnsurf will have far more than just surfing. “Aside from watching the surf action and soaking up the atmosphere,” they write, “guests can enjoy many of the customer amenities including restaurants, bars, retail stores, a surfing academy, a high-performance training center, fitness classes, festival and event spaces, and relaxing, landscaped open spaces.