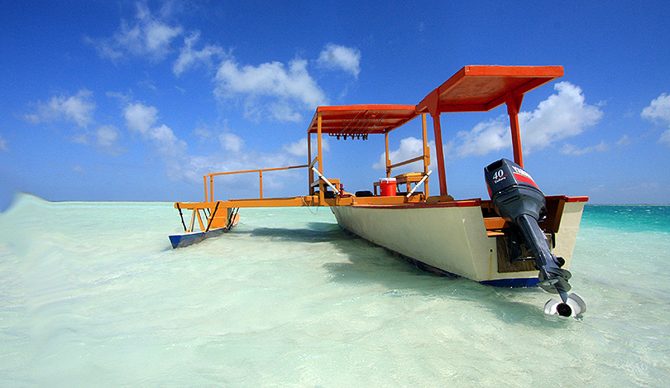 The dynamics of surfing tourism and sustainability have  divided both those who practice traveling and wave riding themselves, and those that invest in it. Most commonly, those that initiate surf centered resorts have an underlying condition of surf obsession, and therefore understand the allure of getting shacked in remote, pristine and uncrowded locations. The passion for riding waves when entering this now highly profitable environment is highly economically motivated for some. There is now an entire industry built on creating something accessible only to those with the resources to purchase a little bit of exclusivity.

One example was posed to me recently from a volunteer working in Samoa, a wonderful and remote location known for rugged, coral bound coastline and wedge filled breaks. This person would consistently take his 110cc Honda Postie over on the ferry to Samoa’s big island, Savai’i, only to have to sneak out to his favorite break under the watchful eye of an exclusive resort. As he wasn’t a paying guest, he had no access to the joy that was throwing itself upon the outer reef, not 200 meters away. They shared this issue with many traveling surf rats and local Samoan surfers who used to have full access until the conglomerate positioned themselves on traditional lands, surely passing many a spare Tala, until the final takeover occurred. So as the “over-the-water” girlfriend friendly resort mongers thrashed their gleaming white thrusters through exclusivity, those that couldn’t afford to stay simply departed. Back to Apia they would travel, boards slung over shoulders, fins still attached, and a strange feeling of fury rising through their abdomen where wax should have met with chest hair.

This predicament is felt throughout the Pacific Islands, and I am sure throughout many other developing and developed surfing tourist economies around the globe. There is however one particular nation that has only recently felt the hard landing of a private surfing resort, that nation is Kiribati (Kiribass).

The Republic of Kiribati is spread over 1,351,000 square miles and has recently been internationally credited for the creation of the largest shark sanctuary on the planet. Maybe this will curb unsustainable tourism?. The Line Islands, which hold the pleasures of Kiritimati (Christmas) Island, and Tabuaeran (Fanning) Island for any level of glassy watered rider, have felt their first example of foreign investment with regards to tourism. Specifically on Tabuaeran, Pegasus Lodges and Resorts have landed what could only be described as one of the most remote surfing experiences the globe has on offer.

A hop, skip, and a jump from Hawaii, California or even the East coast of Australia, the exclusivity of hosting just six surfers at a time, and the options of diving, snorkeling and fishing all sound amazing to anybody looking at freezing 12 foot peaks at Ocean Beach. However, is the approach a sustainable one? Or is it merely another step in the purely economic direction of a boutique surf tourism takeover? Tabuaeran is a unique example. The local I-Kiribati have little access to the outside world, let alone a quiver in the back shed. Famed by Chuck Corbett in the 1980’s, there may still be some surfing craft remaining from visiting tourists. But judging from local presence on the recent visit I undertook to Kiritimati from South Tarawa, where the northwest swell was hitting and creating world class formations, we can only hope that the I-Kiribati can benefit from this kind of western investment.

There are positives to the foreign investment that Tabuaeran is experiencing. Local jobs will benefit from the flow of income. We’d also hope the presence of I-Matungs (foreigners) will begin to establish something of a surfing culture within the Line Island group. Furthermore, that creates competition. Aforementioned Chuck Corbett has a sustainable surfing tourism project in the works that will most definitely benefit the local populous through significant kickbacks into the infrastructure of local landowners and traditional patrons of Tabuaeran. Having lived there for an extended period of time, surfing the famed left handed reef break and becoming as close to local as an I-Matung could do, Chuck is the man to make it happen. Teaming up with a locally based airline carrier, and ensuring that the I-Kiribati don’t miss out on their slice of the pie, local knowledge will expectantly prevail.

Whilst the Gilbert Islands of Kiribati are susceptible to irrepressible trade winds and fickle south swells weaving their way around a number of Pacific Island Countries before reaching the sun soaked outer reefs, the Kiribati Surfing Association (KSA) have teamed up with Pacific Trade and Invest to create the Kiribati Surfing Exploration Initiative (KSEI). This program focuses on engaging local accommodation providers, namely island council guesthouses, in providing a surfing orientated experience to sample the untouched and uncharted breaks that the Gilbert Group has to offer.

Due to the absence of plane transport – mainly from a lack of space for excessive numbers of boards – the KSA have taken to local boats in order to reach the outermost islands that flirt with the possibility of exploration and mapping. The initiative was born through careful research of global sustainability standards and influences from organizations such as Stoke Certified, an incredible crew of sustainable surfing warriors that make the green of eco lodges melt into the past. They use a metrics system of over 142 variables to judge the true sustainability of any destination or accommodation in high traffic surfing tourism locations, also focusing on issues relating to climate change and general environmental destruction. To be classified as “Stoke Certified” is surely a must for any burgeoning surf tourism entrepreneur. World famous locations such as Tavarua have been certified by the wonderful brainchild of Dr. Jess Ponting and Carl Kish. If they can do it then most certainly the opportunity awaits for other similar enterprises to jump aboard this change in surf tourism momentum.

While continued arguments and opinions will roll across the sphere of our community, the KSA will be boarding boats, sleeping where it is traditionally acceptable, and ensuring that those who wish to have a truly I-Kiribati experience have the opportunity to do so. Perhaps this method of touring is attractive to some and not to others. This is understandable, and the experience of surfing a break like Whalers Left with five mates may draw those towards exclusivity. But as the KSEI nears completion at the end of February 2017, the KSA is very much looking forward to the outcomes of how to truly work sustainability amongst the many atolls of a truly undiscovered surfer’s paradise. It would be an eye opener to some to travel as the KSA do, difficult to others who wish wholly for a luxurious escape, and disappointing for some who dreamed of westernized luxury. Wouldn’t it be incredible to jump on a traditionally crafted coconut timbered outrigger, hit the open seas, and peak behind the floral atolls at the hope of surfing somewhere no one ever has before?